The summer is almost over and there are a couple of blockbuster films that people have been eagerly anticipating. The Maze Runner, based on the novel by James Dashner is one such movie. It opens in theaters today, and a movie tie-in game from the collaboration of Sticky Studios, Fox Digital Entertainment and PikPok have made that possible. The Maze Runner is available now to download in the Play Store.

I have to admit, I am curious about the movie adaptation of The Maze Runner. I have read the novels, and James Dashner has created a fascinating world for readers to explore. The synopsis of the first book revolves around Thomas, a young teenage boy, who is jarringly awakened as he is being thrust upward in a caged box in some sort of elevator. He doesn’t know where he has been and he doesn’t know the group of boys, known as Gladers (They are trapped in a walled-in area called The Glade) that are curiously staring at him as his eyes adjust to the bright sunlight and his surroundings. After brief introductions, he learns that every morning, a few runners, go into the maze that is at the periphery of the Glade to explore a way out. The runners are the strongest and fastest of the group. The maze has frightening creatures within it and the worst part is, it closes every evening. You don’t want to get trapped in the maze overnight because people don’t make it out. 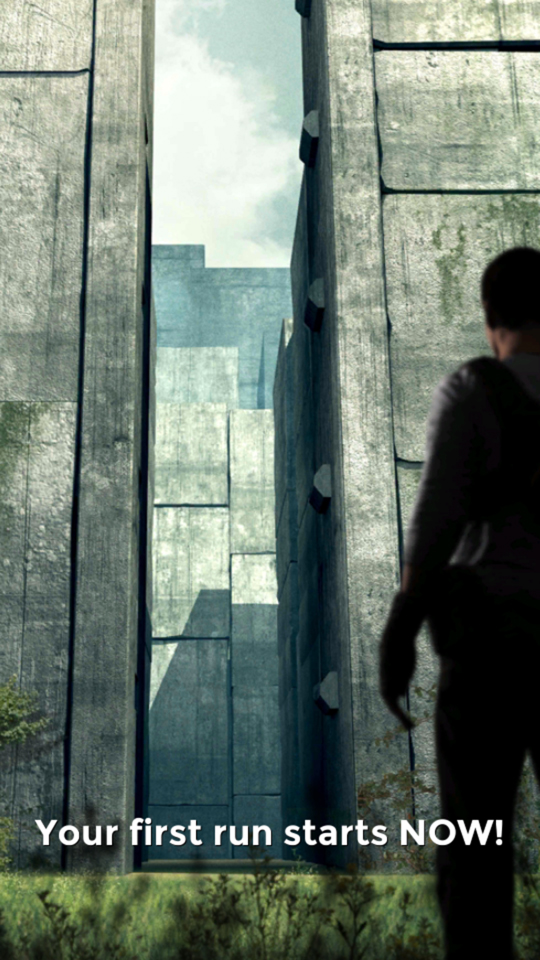 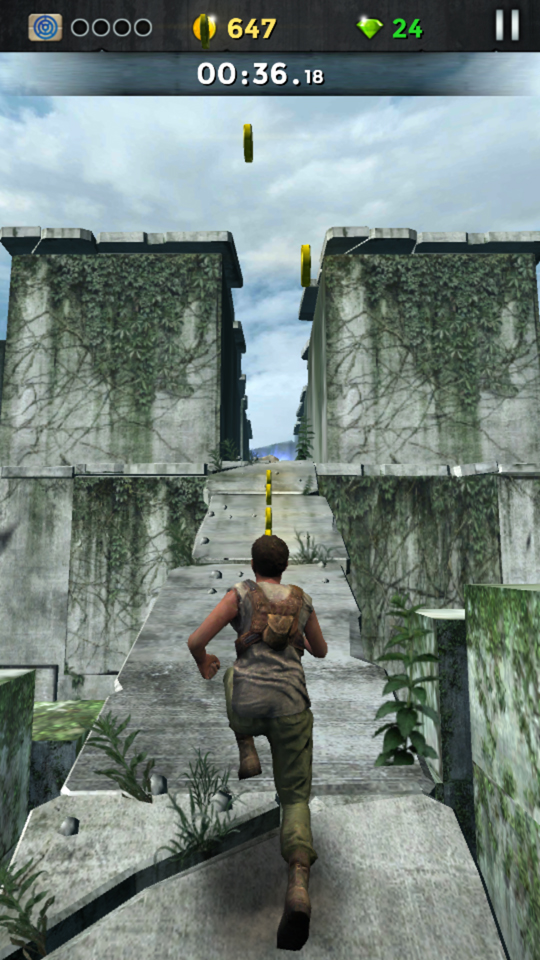 Hence, the setup for a wonderful triology that has now spawned a feature film, and I hope it is good. The Maze Runner game aptly fits in the endless runner genre. If you are tired of endless runners, well, there are plenty of other types of games out there. However, when I see that PikPok is involved in a game, I always check it out. The production quality of their games is generally really good. It is no different here. Sticky Studios, Fox Digital Entertainment and PikPok have crafted a game that seems to fit well within the scope of the book.

In the game, you start off with a generic character from the Glade. You begin the tutorial learning that you are to explore the maze, and by doing so, find artifacts that are loosely scattered throughout the level. This is a little bit different than an endless runner in that you actually have levels to complete. In those levels you obtain coins, gems, artifacts and clocks. Clocks cut down on your time while running through the maze. That is another part of what makes the game tie-in perfect. When you start your run, the clock begins counting down. If you don’t make it through the maze in enough time, the doors are going to shut and you don’t complete the level. You complete the level by running fast enough to get out of the maze, as well as collecting all four artifacts on the level. Once you have collected the artifacts on the level, it gives you access to the next level and the map room. The map room helps you understand more about the maze. 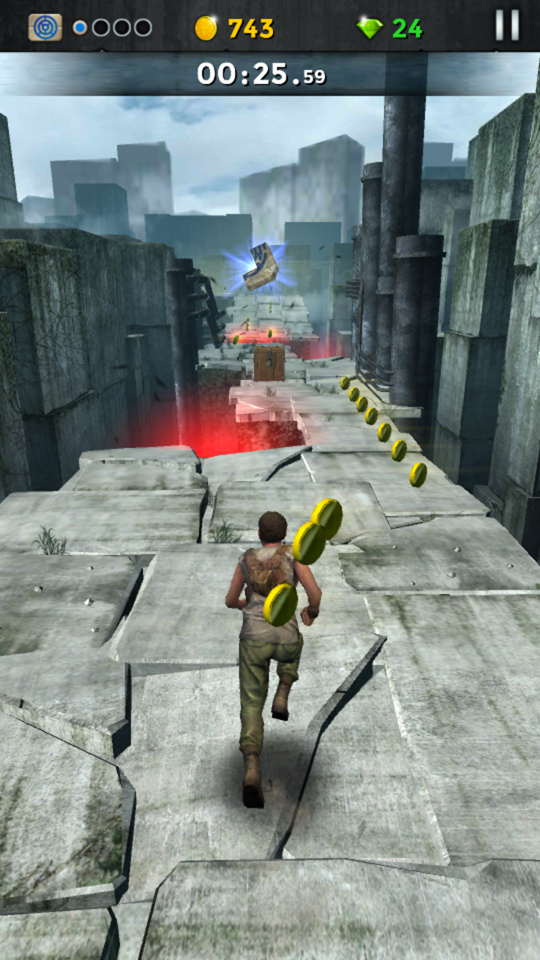 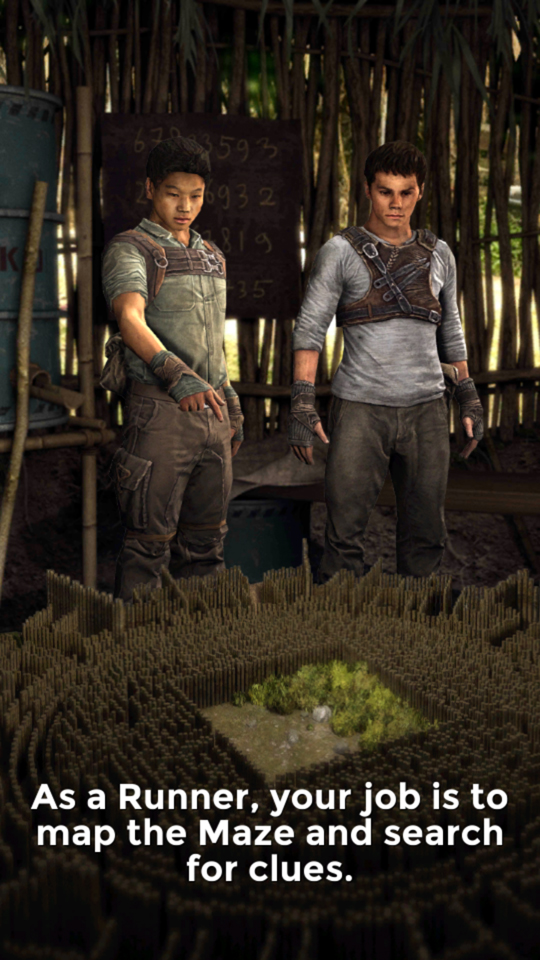 The controls in the game are fairly typical, swipe up to jump, and swipe left or right to move in those directions. Swiping down allows you to slide and helps you to burst through boxes in the maze or narrowly escape falling rocks, or areas that you can’t run straight through. In an interesting twist, once you make it through a few levels, wall-running is added to your list of moves. This is definitely unique and welcome. In some ways, it gives you the feel of parkour, but nothing with the fluidity of a game like Vector. You can upgrade your runner by spending coins in the game. The initial runner you are given has low stats and the controls initially feel a little sluggish, but that was until I realized you can tap the screen to make your runner go faster by sprinting. This is a really nice touch because it adds to the frenzy of you trying to make it out before the maze closes. The ability to sprint is based on your stamina. When you begin to sprint, a lavender colored bar appears and begins to recede the longer you tap faster/sprint. Once the bar is empty, you can no longer sprint, but it refills after a few moments of running at your regular pace.

The graphics, sound and level design impressed me. The graphics, even with a limited color palette are well done. Obviously, the book/movie tie-in means that hopefully the author’s vision of the maze has been implemented. Based on what I have read, it seems to be as I imagined it when I read the book, though I imagined it a little darker. I can see where that would be more difficult to implement in a game. Wearing headphones and starting up the game brought another level of engagement. The sound is phenomenal. With a good pair of headphones, you actually feel like you might be in a movie theater or in the maze itself, running for your life. The level design is varied enough to keep it interesting as you explore the different portions of the maze. 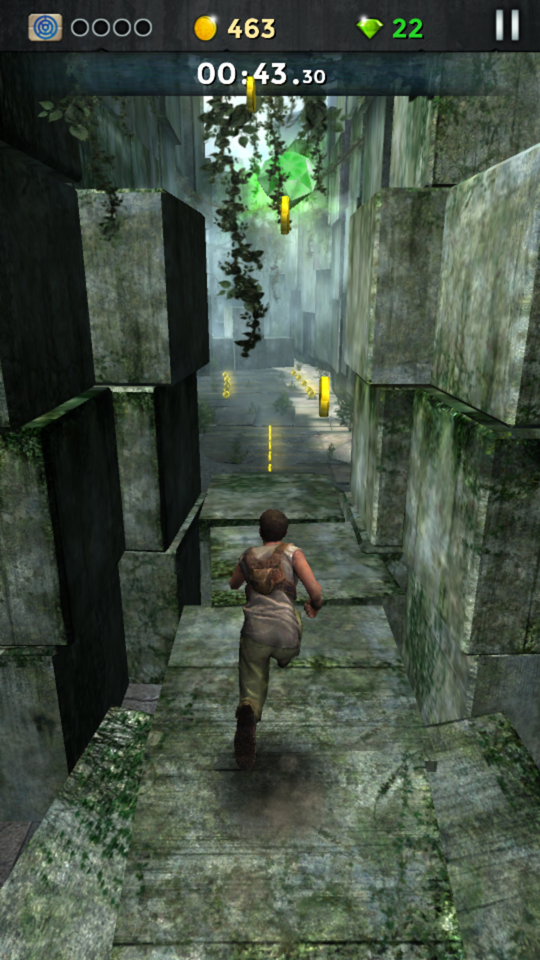 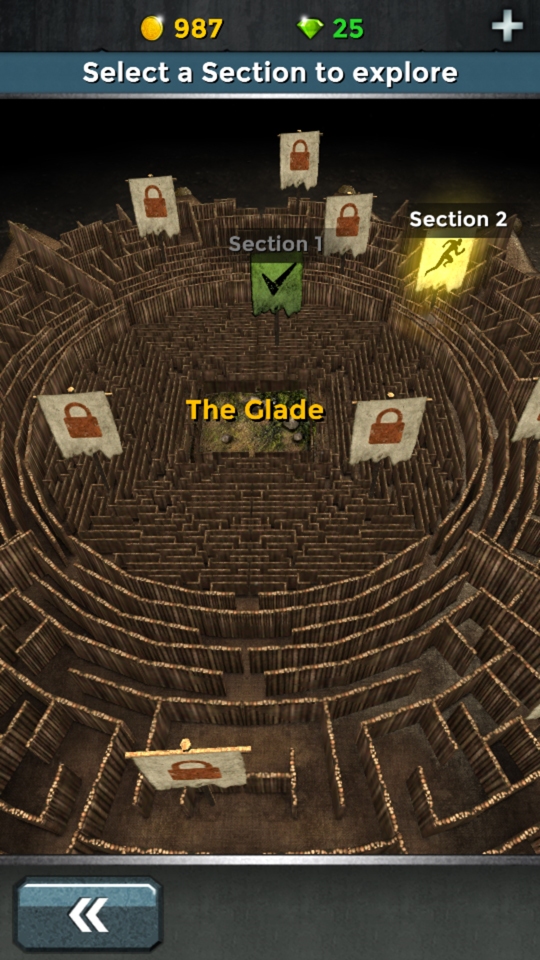 The Maze Runner has met my expectations for a book/movie/game tie-in thus far. It is a satisfying runner. The title is free-to-play, but it does not appear to be hindered by the in-app purchases. If you want to play the main character Thomas, or other characters, you have to pay $3.99. It is not clear to me if it is $3.99 per character or not. I would name other characters, but I don’t want to give away to much of the story, because it is a good one. Some characters can be purchased by the coins you collect as you run through the maze, it is also how you level up your character. If you collect gems, it allows you to continue a run if you meet an untimely end by smacking into a wall or falling into the abyss once the floors start moving erratically as you gingerly traverse them.

If you enjoyed The Hunger Games novels or movies, check out The Maze Runner trilogy. It is well written and extremely engrossing if you are into reading novels based within the realm of dystopian fiction. If reading is not your thing, well PikPok, Sticky Studios and Fox Digital Entertainment have made it easy for you. You can download The Maze Runner game for free right now in the Play Store. Do you think you will be able to escape the maze?