Blackwell Legacy Review: The Good, The Bad, And The Ugly

The Blackwell Legacy is a point and click adventure game that was created by Dave Gilbert who founded Wadget Eye Games, which also created The Shivah. Unsurprisingly, the gameplay is VERY similar between them. So much so, that they are bordering on one almost being a clone of the other. Players assume the role of a young lady named Rosangela Blackwell who writes book reviews for a local paper. With the help of her companion, the story delves into one of the supernatural and mysterious suicides.

First, the good. Much like The Shivah, this is a 16-bit game with actual people doing voice work for the dialogue. During conversations, players are given choices on how to handle what is said next by the character currently being controlled. This is then coupled with an enlarged image of the character’s face in an upper corner of the screen, to better indicate emotions (still in 16-bit, mind you) to correlate with the voice being heard. This allows the characters to bypass the restriction of highly retro-grade graphics to still show facial expressions, and this is accomplished easily. The choices tend to be which sentiment you would like the protagonist to convey, and then players hear both ends of the dialogue in question.

One of the things I especially enjoyed about this was the fact that Rosa tends to be a bit on the cynical side, so snarky sentiments were frequently available. When attempting to give a “heartfelt” response, Rosa would frequently offer up a smile that appeared very stilted, much to my amusement. In keeping with other point and click adventures, players are expected to both pick up useful items from various locations within the game, as well as deduce theorems by combining facts ascertained by way of conversations. The inventory of acquired items can be accessed by tapping at the top of the screen, along with the save/load function, and a notepad belonging to Rosa where the facts can be dragged, one over another, to see if there’s a connection; more than once during the game, this type of logic is required to advance beyond a given puzzle.

Secondarily, the bad. As I mentioned earlier, this game is much like the Shivah. Almost too much. While I enjoyed that game *very much*, this plays like it’s spitting image. The layouts are identical, the placements of the character faces, the graphics, the “overworld” map, and so on. It strikes me as a lack of originality, as there was little changed from it outside of the story and characters; with both having their initial release in 2006 for PC, I’m unable to say which came first and which was the “skinned” version. And while that, in and of itself isn’t a drawback, the similarities continue and go so far as to have an identical case of brevity to it. Like the Shivah, Blackwell Legacy can be accomplished in a little a hour or two. With it being so short, replay is pointless despite the multiple endings available to the player. If this game followed the Shivah in order of release, I would’ve liked to see a progression of sorts in the length of the game. Hopefully that was addressed in the subsequent releases, as this is one game within a series. 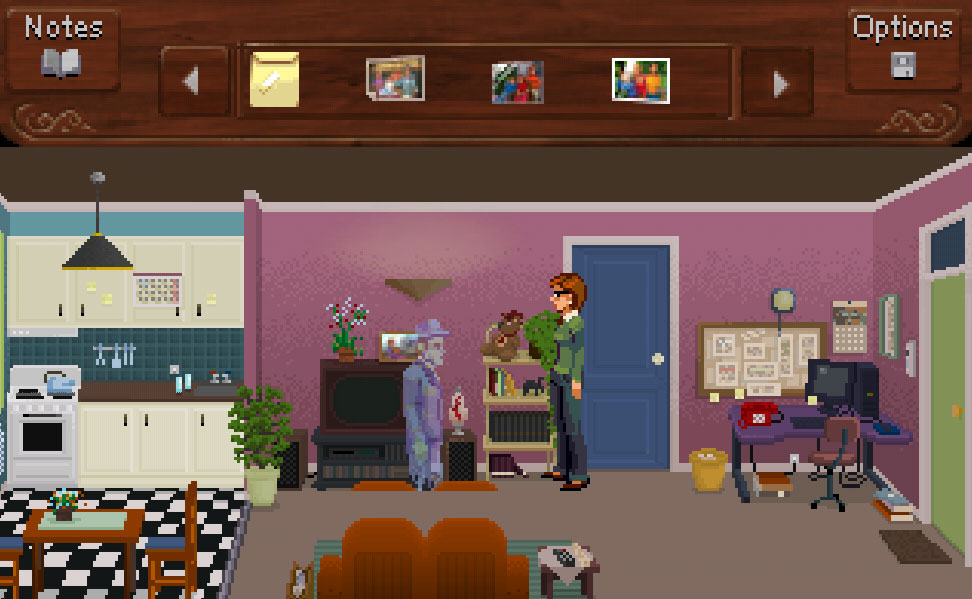 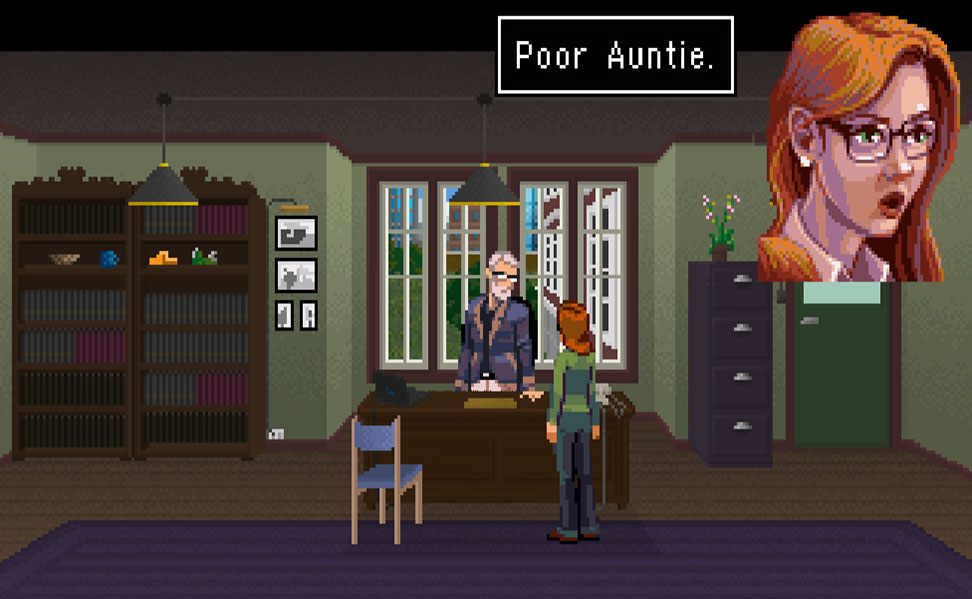 And now to the ugly. At more than one point, this game would hang and stutter for reasons that confound me. The music was enjoyable (with a bit of an electronica feel to it), when it wasn’t stuttering. The animations were fine (for being 16-bit), when they weren’t stuttering. At first it wasn’t too bad, but over the length of the game it became quite the nuisance as it would happen at random points and take me completely out of the game experience. Unsure of the cause, I loaded the game onto my stock 2013 Moto X (I do most of my gaming on my stock 2012 Nexus 7) in order to rule out older hardware, only to find the same thing happen on my phone. This is my biggest gripe with the game, but not my only one. Even the splash screen that players encounter when the game first loads needs work.

The game is played entirely with the handset held in the landscape position. Yet when the game is initially opened, the splash screen is oriented in the portrait position. I found this to be more curious (and less of a bother) to me, especially when compared with the stuttering within the game. Should Wadget Eye Games address these, the game would be enjoyable to those who enjoyed the Shivah, or throwback point and click adventures in general. Until that point, I am compelled to warn players to stay away.

Editor’s Note: Right now The Blackwell Legacy Part 1 is only available through the new Humble Bundle for PC and Android 11. It is now visible on Google Play as of the time of writing this.