Crazy Taxi Review: Crazy is One Thing, Out of Control is Another

If you ever caught it in the arcades or on the Dreamcast the name Crazy Taxi should hold at least a somewhat special place in your heart. As a game built on adrenaline, a pretty solid and appropriate soundtrack, and an absolutely ridiculous implementation of physics, Crazy Taxi was probably the title I spent the most hours with on my Dreamcast in the day. Its classic arcade sensibilities pitting you against the clock and unpredictable challenges made it easy to get sucked in by, but very difficult to really master in any consistent way.

The good news is that the game available on the Android Market is faithful to the Dreamcast version. The bad news is that it isn’t just faithful to that version, Sega apparently wrote their own Dreamcast emulator for Android and are giving you that precise game… dated looks and all. At the time it was released the visuals in the game were a bit on the simplistic side where models are concerned but it still looked like a solid conversion of the arcade machine. Now those same models have a primitive look to them and the textures have that older-school blurry quality. Granted, most of it is usually whipping by you at a breakneck speed… so how big an effect that has on your perception of things will vary. 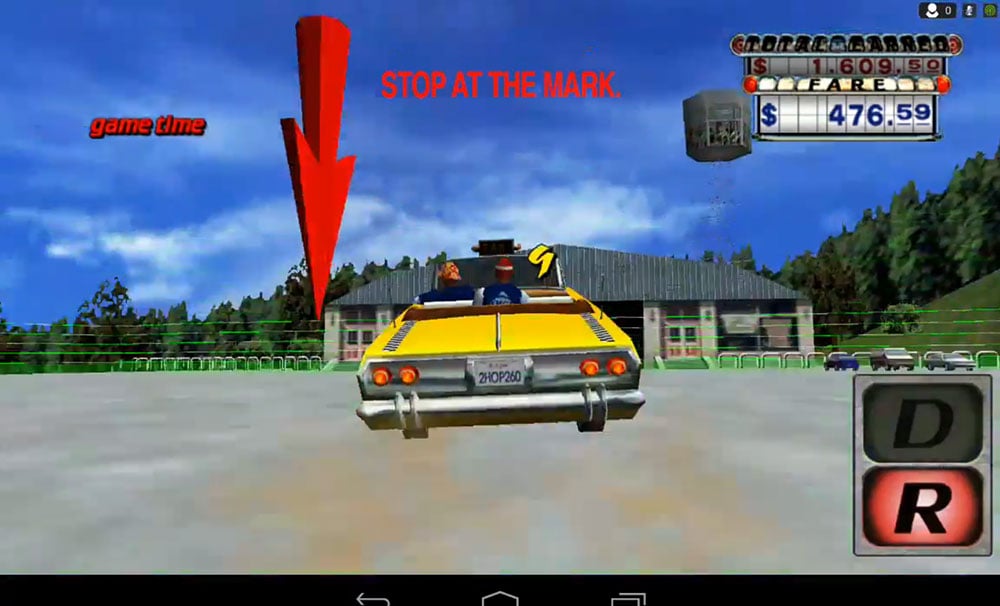 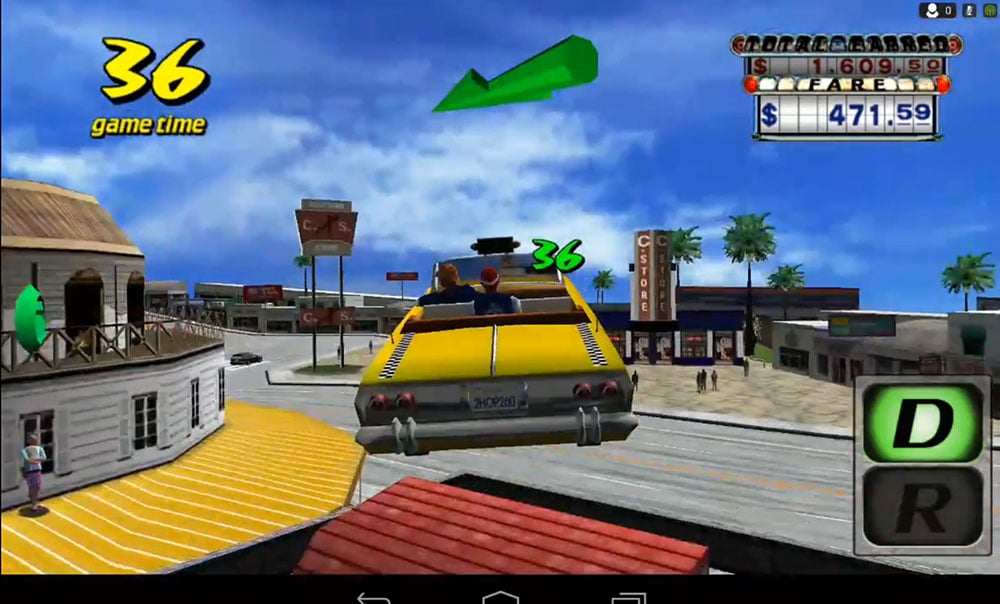 When it comes to sound, at least for me, the game has continued to stick with me all of these years and hearing it all again fresh was a jolt of nostalgia. The indie-ish rock tunes for the game are an absolute fit, the dude that talks when you start out and finish absolutely has a voice you don’t forget, and there are various traffic and pedestrian sounds that fit right in. Of all things in the title I am most thankful this came over lock, stock, and barrel as any change would have been sacrilege.

Getting to how the game plays I would say it is a love it or hate it proposition. Crazy Taxi’s feel and sensibilities differ substantially from almost every other racing game series out there. As I mentioned earlier this is absolutely an arcade game at its heart, designed to give you a challenge that will absolutely stop within a number of minutes. How long you can keep getting fares and delivering them quickly enough to keep the clock up will dictate how long you last. Knowing where landmarks and shortcuts are will certainly help but it is absolutely a hectic experience so what you plan and what you can execute on any given run can have quite a gap.

It is here that the biggest problem with the port shows its ugly head as well. The control in the game is absolutely terrible when it comes to steering. The sensitivity on the analog stick is so high that it is practically made digital in the process. This makes the already frantic pace of the game pretty aggravating at times, as maneuvering through traffic is a complete crapshoot, with no real room for technique. The control was actually so horrid at first that I swore the game simply had its emulation clocked too fast on the processor, but as I played it more the pace didn’t seem any more insane than I’d remembered so much as I was simply unable to get any nuance out of my steering. I understand that the port of the game makes it unappealing or impossible to implement an in-game calibration screen but you’d think with the effort put in, for what is ultimately a low-cost port milking some free money out of a new marketplace, they’d invest a little more effort. Under the circumstances, as much as I love and will likely continue to play this, I find it hard to recommend at its full price for anyone who isn’t addicted to the original already and willing to put up with the wonky controls. 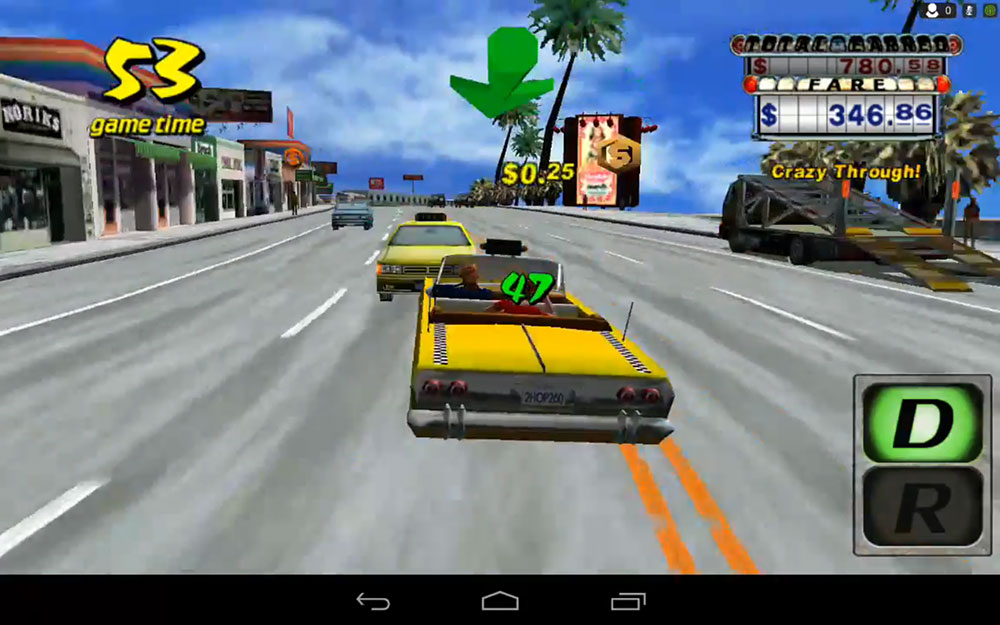 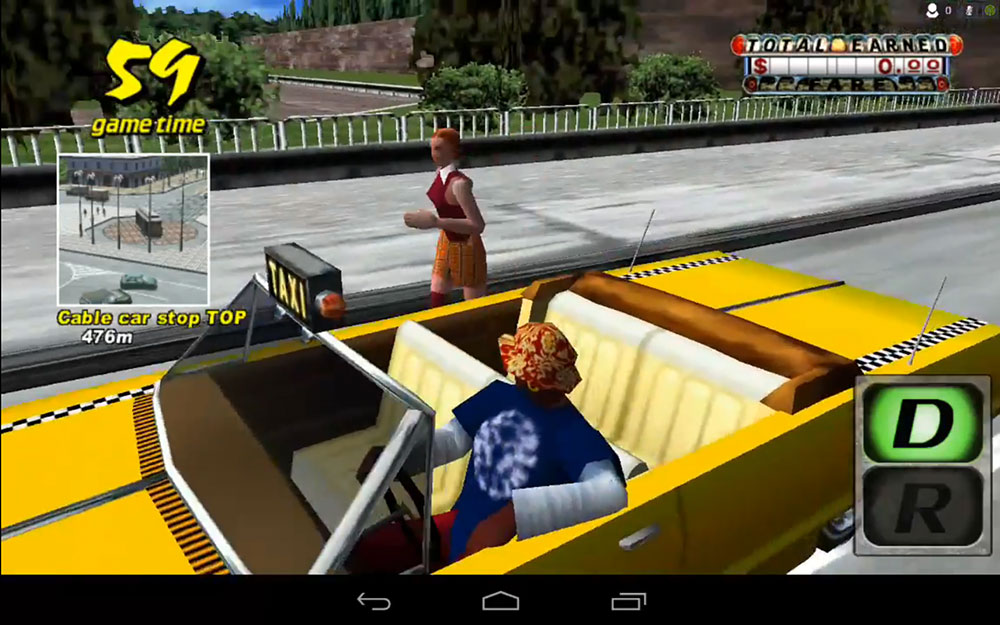 Graphics: 2 – Visually there’s no way of getting around this being a game featured on a console from over a generation ago. The models are relatively simple, the textures are pretty blurry by modern standards, and everything in the game screams arcade much more than realism… something many folks have likely become less accustomed to since it was in its heyday.

Sound: 4.5 – If you grew up or listened to music around the late 90s the soundtrack is all The Offspring and Bad Religion, delivering tunes that absolutely fit the game. Beyond that there’s really just the wonderfully strange dude talking and then random screams but in terms of audio the game always seemed to be on the money and nothing has changed with that in time.

Gameplay: 4 – Even without the control issues not everyone will be a fan of the complete insanity that a few minutes with the game brings. That said, I’ve always been a fan of the somewhat unique nature of the game and think it’s a shame that not much else has happened with it of note beyond the original incarnation (though there were some attempted sequels that never lived up to the original). Would love to see a fresh try, taking proper advantage of everything modern platforms like even the Shield offer, but somewhat doubtful that will happen.

Control: 1.5 – There’s simply no way to get around it or sugar coat this simple reality: The control in this port stinks. If you watch the video you’ll notice the very jerky way the car often ends up moving around. Even with some attempts at only lightly using the analog control the response the game has for turning is insanely sensitive. Consider, this is a port of what was originally an arcade unit racer with an actual steering wheel; while driving in the game is meant to be crazy it wasn’t intended to be this poorly implemented either. Truly, the game in no way makes meaningful use of analog controls and for most people I’d say that given the cost of entry to get the game that will be an absolute deal breaker.

Lastability: 3.5 – If you could get past the control issues there are a few modes to play in the game, including the very diverse challenges in Crazy Box mode that ask you to do a variety of strange things for simple unlocks in the main game. Again, though, with the control issues some of these challenges are unnecessarily hard, making them more difficult to enjoy. In the end it all comes down to whether you simply get a kick out of the core game and just want to keep “pumping quarters” into it to try to get a better run.

Overall: 2 – Truly the control is so badly implemented that, when you pair that with the price Sega is currently asking for the game, I consider it not worth purchasing. I’d even extend that statement to people like me who are nostalgic about the title. It is fun to revisit something from the past but when the experience doesn’t come along for the ride you usually feel like hopping out of the car like a bad fare. A real shame.