I’m a massive classic gaming fan and nerd, and my love of all things video games goes back to the very beginning. My connection to the arcade is so deep I actually worked with my father-in-law for 6 consecutive weekends to construct an arcade cabinet from plans that I then set up with multiple emulators, but the most important of them is absolutely MAME: the Multiple Arcade Machine Emulator. To give you an idea of the extent of my love, my gaming handle going back almost a decade is MAMEiac. It’s in my blood. I love that classic arcade feel, and I understand the notion of playing a game for its own sake, or getting a high score; I don’t need a compelling story or modern trappings to find joy.

The reason I relate this information is that, to me, it is important when sharing my conflicted feelings about Alpha Wave. Inspired by the early days Intellivision classic Astrosmash (right from one of the developer’s mouths) the game blends ideas and some looks from a handful of classic shooters (can’t give enough props for the one power-up that brings back tough memories of Raiden). There are a number of modes that change up both the scenery and the nature of the challenges, as well as multiple skill levels to accommodate a wide variety of levels of experience. 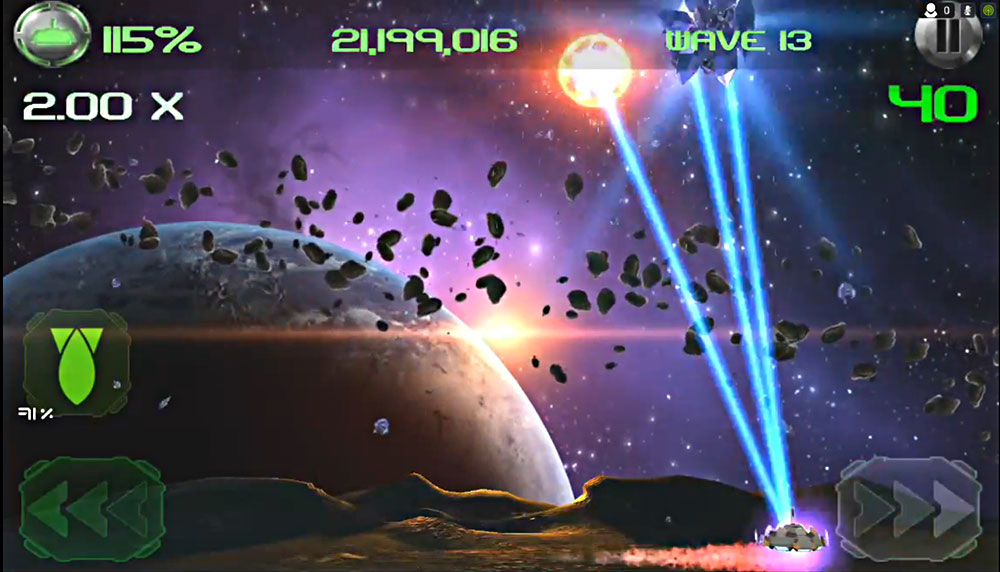 Getting into the pieces of the puzzle the game is probably one of the most attractive I’ve seen on the Shield tablet thus far. While its look isn’t terribly complex what is on-screen is attractive, fluid, and full of pizazz. Overall the specific scale of everything seems about right as well, though perhaps a little big, and this game will probably look great on a pretty wide variety of devices, never getting too small even on phones. Even with so many objects, projectiles, explosions, and random bursts of color everywhere from different enemies and effects everything remains silky smooth.

When it comes to sound a classic arcade shooter honestly doesn’t need much but I’d say Alpha Wave delivers a terrific ambient soundtrack that pulses along with the action and keeps things feeling exciting. On top of that a great deal of care has been put into making pretty well every sound in the game distinctive from the different power-up weapons to the wide variety of enemy types to cues for when your bombs and hyper weapons are ready.

Getting past the very solid foundation of how things look and sound there is absolutely a worthwhile game here, what you get out of it could be difficult to predict though. I think the game occupies an odd space (though some would say perhaps that’s a strength for a lack of competition) where I’d be happier with some added complexity heaped on in terms of movement and variety in power-ups, but for less experienced gamers it may seem a bit overwhelming. 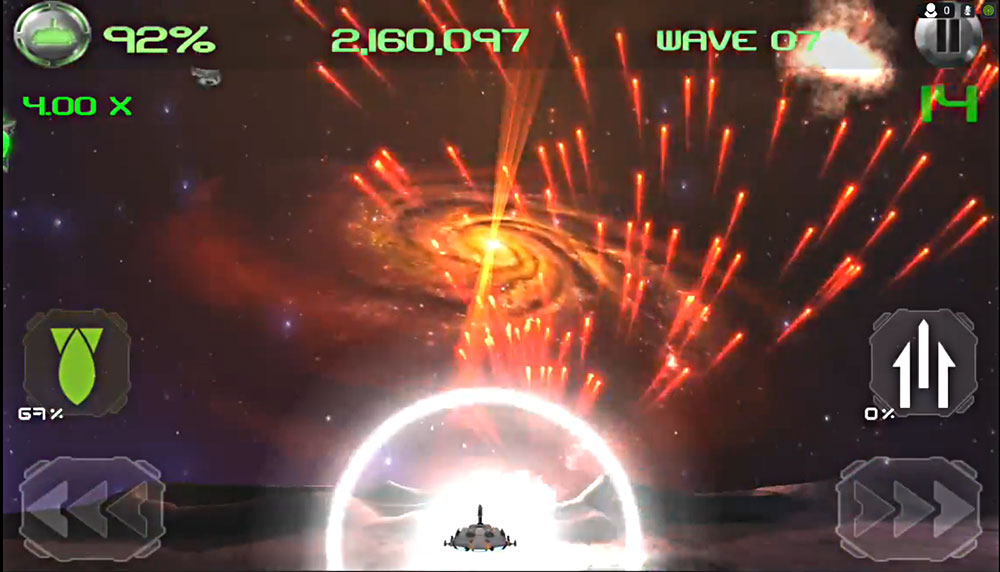 Control is limited to moving back and forth, and then remembering to utilize your bomb and hyper weapons periodically. You will want to keep an eye out for falling power-ups (my god, especially speed, the initial movement rate kills me) as once they hit the ground they won’t last very long. Depending on your style of play and the mode you choose it is incredibly important that you get and then keep your preferred weapon. Each has their own strengths and weaknesses and depending on whether you’re just trying to survive or maximize your score you’ll probably tend to gravitate to different choices. In particular as you transition to focusing on your score the name of the game is all about not getting hit, and with many enemy types that can send projectiles in multiple directions at once you’ll need to establish a plan and then stick with it.

Graphics: 4.5 – While I’m positive it is possible to make a more gorgeous game for the platform I’ll say that this game is very attractive and appears to be making great use of the processing power Tegra brings to the table. It is hard to find any specific fault in the visuals for the game, but I wouldn’t say it has reached the limits of what the hardware can do either.

Sound: 4.5 – Again, very difficult to find any faults. The minimal soundtrack drives the action and keeps things pumping. Each enemy type has distinctive sounds associated with them, as do your power-ups. Combined with the visuals it all creates a very immersive experience.

Gameplay: 4 – Here’s an area where I see things splitting out based almost entirely on tastes. As stated above this game seems to occupy a very odd space overall, as it isn’t an aggravation survival shooter requiring that you maneuver your way through waves of carefully orchestrated enemy fire, but it also may be a bit overwhelming for people who aren’t shooter veterans. There are multiple skill levels, and those do help, but something in the experience still feels odd to me. Somehow I’m left wanting either more complexity (though that could minimize the potential audience) or for it to have a more whimsical “just for fun” quality. It being somewhere in the middle just sticks out as unusual to me, though I don’t doubt people could enjoy it greatly if it hits their sweet spot.

Control: 4 – The game actually works reasonably well even without the controller, mostly because the control scheme is very basic. All you end up with are controls for left, right, bomb, and hyper weapon. Though I always find on-screen controls to be a bit wonky the longer you play on them in a given session they are serviceable here as the on-screen button areas are pretty big but manage not to interfere with your seeing the action. If anything I was aching for more maneuverability as until I got the initial speed up power-ups the rate of movement for my craft was always frustrating me.

Lastability: 3.5 – Let’s be clear, this is an arcade shooting game and your motivation for playing all comes down to either getting the achievements from the game or in competing on the leaderboards for a top score. I will tell you, while I was able to complete normal mode pretty quickly, there are some people out there playing the game on an entirely different level with some pretty obscenely high scores. If you’re into that and enjoy the gameplay there’s probably a good amount of fun to be had here. For a casual gamer an average play session may run a little too long for it to be a good “play while you wait for your coffee” game, but with the visuals and sounds sucking you in there could be some value in it as a distraction.

Overall: 4 – Up against both arcade classics and some other remakes (Space Invaders Extreme remains a stand-out for me) Alpha Wave does well for not being based on something pre-existing that carries instant nostalgia with it. As a showcase title for the platform it represents everything pretty well, and depending on your tastes it may well be something you’ll love to return to. In the end its overall quality and reasonable price make it a fairly safe bet if you’re a shooter fan, I just can’t say it leaps out as an “instant classic” for me.