Devil’s Attorney Review: An entertaining romp through a legal RPG

Devil’s Attorney is a clever, turn based strategy game. Set in the 1980s, players assume the role of a sketchy criminal defense attorney named Max McMann, who is climbing the economic ladder. The goal of the game is to become the top dog in defense law, making Max filthy rich.

The general feel and story of the game are quite amusing. Every time you open the game, the theme song plays, as if it were a television show. Like the game’s setting, it’s done in an 80s fashion to a “T”, down to the neon font and the keytar being played. Max’s job as a defense attorney is get his clients acquitted. The cases are clever and sometimes comical, with players viewing a manila folder containing the charges against his client, the client’s excuse as to why he or she is innocent of said charges, and a picture of both the client and prosecuting attorney that Max will be facing in court. The charges are quite varied, ranging from unpaid parking tickets to software piracy to assault to various forms of fraud. 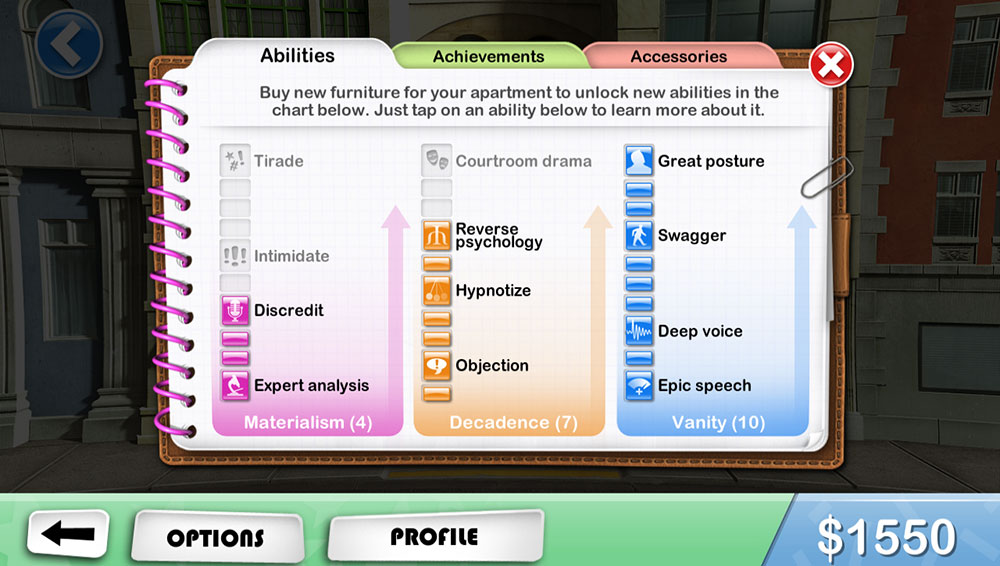 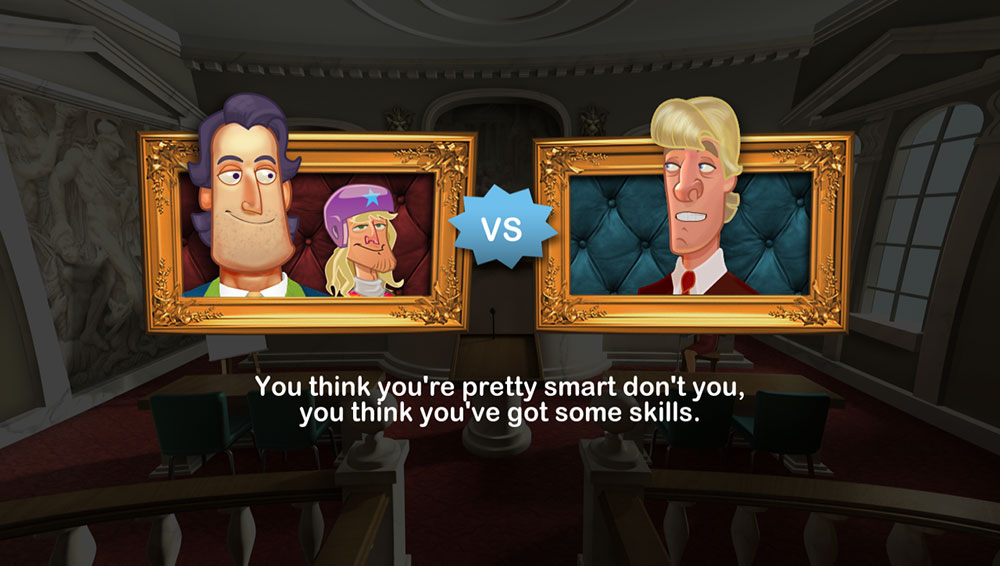 Before entering court, Max will banter with the opposing attorney, which usually begins with arguing for his client (and in turn, listening to the prosecutor) but quickly devolves into getting under their skin and finding personal amusement at their expense (or even occasionally hitting on the opposing counsel). Despite Max being selfish, shallow, and generally unsavory, I found it easy to like him nonetheless. The pre-trial skirmishes are also how the game’s story is advanced, as Max or the prosecutor will refer to previous, pre-trial conversations or hint at future ones. Max also has an apartment that players decorate, and clothing and a car to upgrade. These are also handled with a garish sense of ’80s flair, and when it’s all added together, it makes the game quite comical and lighthearted and takes full advantage of the cartoon-ish style graphics.

The gameplay for Devil’s Attorney is pretty strait forward. Once all the banter is done between attorneys, Max and the prosecutor do battle in a turn based format, similar to the older Final Fantasy games. All life meters / HP are illustrated in credibility. For example, Max’s HP is the strength of his case, in numerical form; the same numeric representation applies to the opposing attorney, witnesses, coaches, evidence, and the like. Max has various kinds of attacks to choose from, with them serving various purposes and costing a kind of “MP” to use. So if you are slated to face witnesses that you want to take out, you would attack with “pandering”, “interrogate”, or “cross-examine”. Each of those attacks do a different amount of damage to a person’s credibility, and they are removed when the credibility reaches/exceeds zero. For evidence, Max can use “Analysis” or “Tamper with Evidence” to reduce the damage it can do to the credibility to the case. Max could use “objection” to prevent them from attacking during their turn”, or “Ego boost” to pump up the damage of his attacks, and so on. Max’s round is over when all of his points have been spent, and the whatever is left to the prosecutor then proceeds to attack Max’s case in similar fashion. 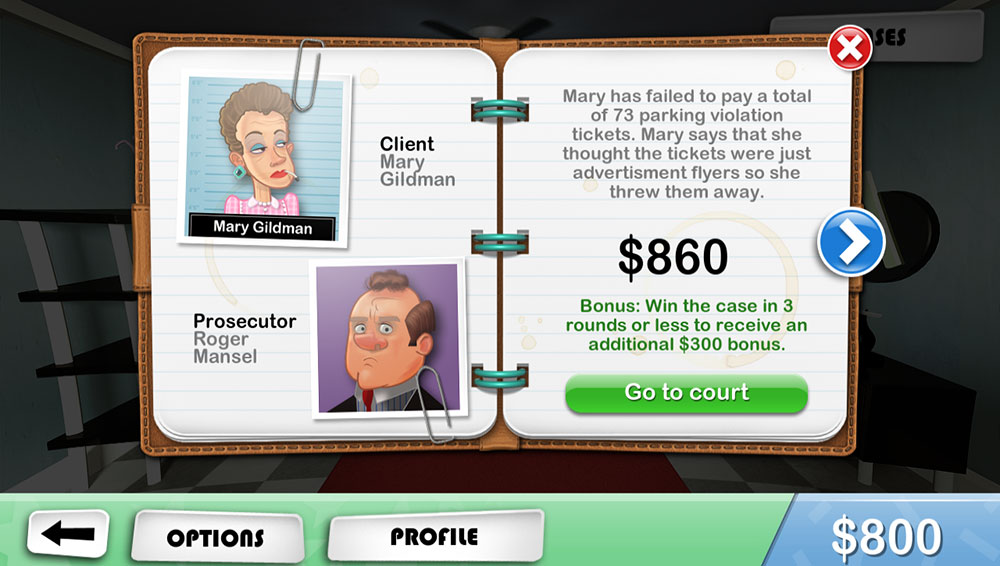 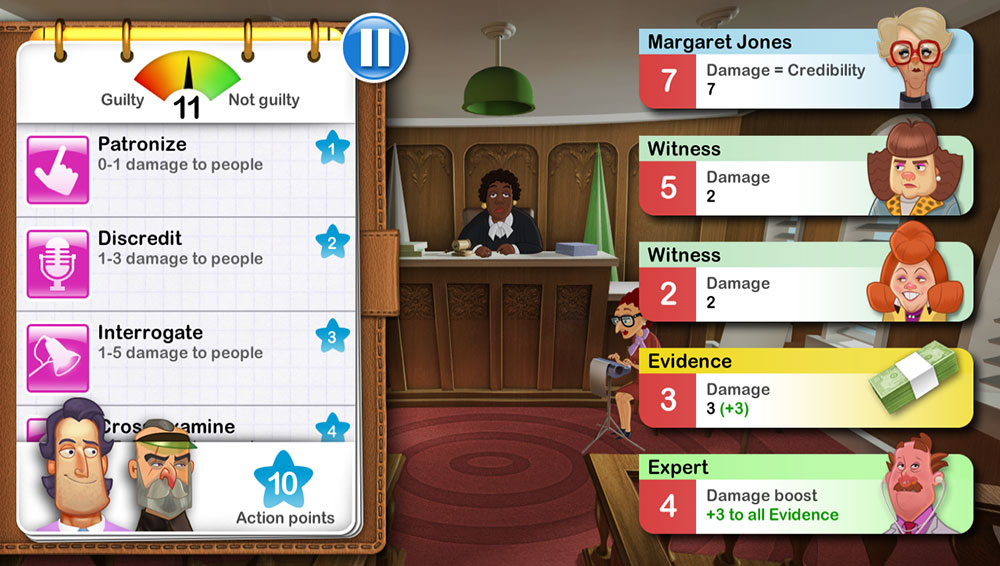 Winning a case pays Max cash, and there’s a bonus tied to completing it within a certain number of rounds. In the off-chance a case is lost, it’s simply replayed from the start (without penalty). Of Max’s stats, there are three categories that are expressed as a track to be improved: Materialism, Decadence, and Vanity with new powers being unlocked as the player progresses along a given track. Decorating Max’s car, apartment, and appearance all improve upon one stat or another, so choose wisely. Two to three items are typically for sale, with each improving something different upon the items purchase. Once a purchase is made, the other two items are forgone for the remainder of the game. So choosing to focus on the Vanity track will often come at the expense of the other two.

On the whole, this game was quite fun to play. It’s a more-than-amusing spin on the conventional turn-based combat/RPG model. There are 58 cases to win against 9 different prosecutors. It won’t take long to complete, especially on the easier setting, but should be ample fun regardless. The game is currently available on Google Play for $1.99 or in the current mobile Humble Bundle (for free).