As many fans of Tin Man Games already know, the company has been focusing a lot of their time to bringing the Fighting Fantasy series of adventure books to mobile. They already have most of the first titles in the series already out and now there is a new one to add to your collection called Caverns of the Snow Witch.

This particular title is actually one that I haven’t read through back when I was actually reading the physical copies of the Fighting Fantasy series. Here is the background for the storyline that you will find in this particular book:

If you are not familiar with these types of books, essentially these are RPG books, or Choose Your Own Adventure style of books, where you will be making decisions throughout your reading. You will be given a couple of choices and depending on the choice you make, you will flip to the corresponding page where you will find out the results of your choice, be it good or bad. 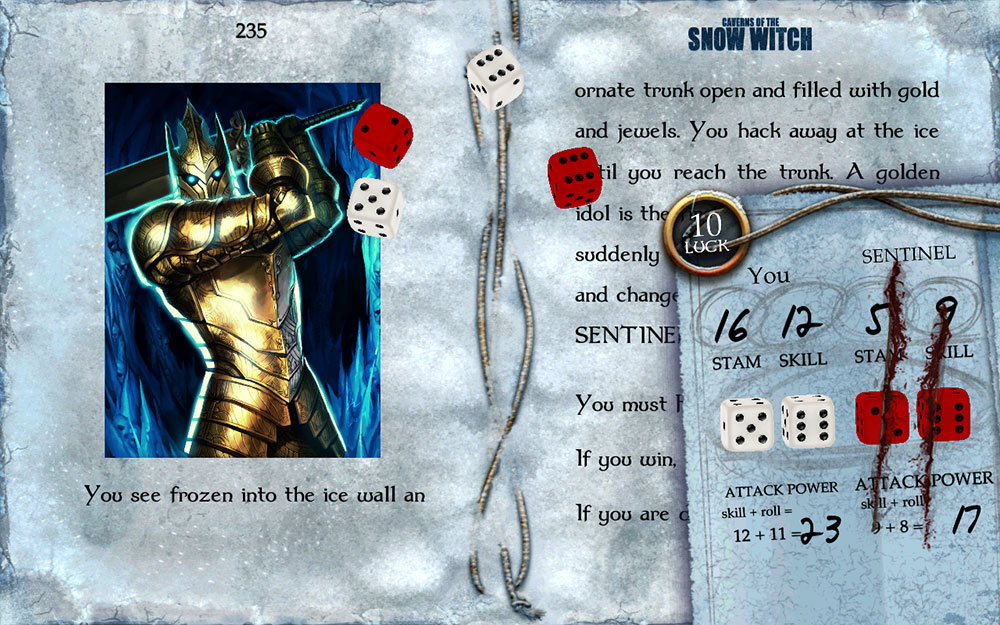 Cavern of the Snow Witch Features:

• Make the gamebook as easy or hard as you like and even turn on a special cheat mode to read it old-school!
• Atmospheric new visuals which can be turned off to make the gamebook look like it came off the printing press in the 80s!
• Les Edwards’ famous cover brought to life.
• Gary Ward and Edward Crosby’s classic illustrations included along with new, full color illustrations specifically for this edition!
• Achievements to find throughout the gamebook.
• Read the book horizontally or vertically on your tablet.
• An automated Adventure Sheet to keep track of stats and inventory.
• Realistic physics based dice rolling. Shake your device!
• Artwork gallery. Find an illustration in the gamebook and be able to access it full-screen forever.
• Bookmarking system which saves your position in the gamebook, much like putting your fingers between the pages to remember your previous page when reading the paperback!
• Specially composed soundtrack and sound effects.

Tin Man Games versions of the Fighting Fantasy series feature the entire original story, new full color renditions of the original art from the books, and all the interactive features found in all of Tin Man Games titles. This includes an official character sheet and even dice rolling, making it much more interactive.

Caverns of the Snow Witch is now available on Google Play for $5.99.