First Strike is a simple strategy game that allows players to be in command of a nuclear arsenal while facing other same arsenals.The goal of First Strike is to be the last nuclear power standing. For better or worse, there isn’t much to this game, so let’s jump in.

The really isn’t much of a story to speak of, beyond what I mentioned in the introduction. The layout of the game is very much akin to Google Earth, with a facsimile of our planet hanging otherwise near empty space. The countries and territories of the globe are broken up into Risk-style territories, consuming up either large or small swaths of land, at times shaped like commonly known countries, while at other times the territorial shapes aren’t recognizable. Players can spin the globe by swiping; infinitely on the Y-Axis and while not infinitely available to swipe on the X-Axis, players can rotate it more than is necessary (I presume that this is to keep players from viewing the globe in an upside-down fashion). Zooming in an out is accomplished by pinching, as one would when doing so in a mobile browser. This allows players the ability to quickly navigate the planet to issue orders to various territories. 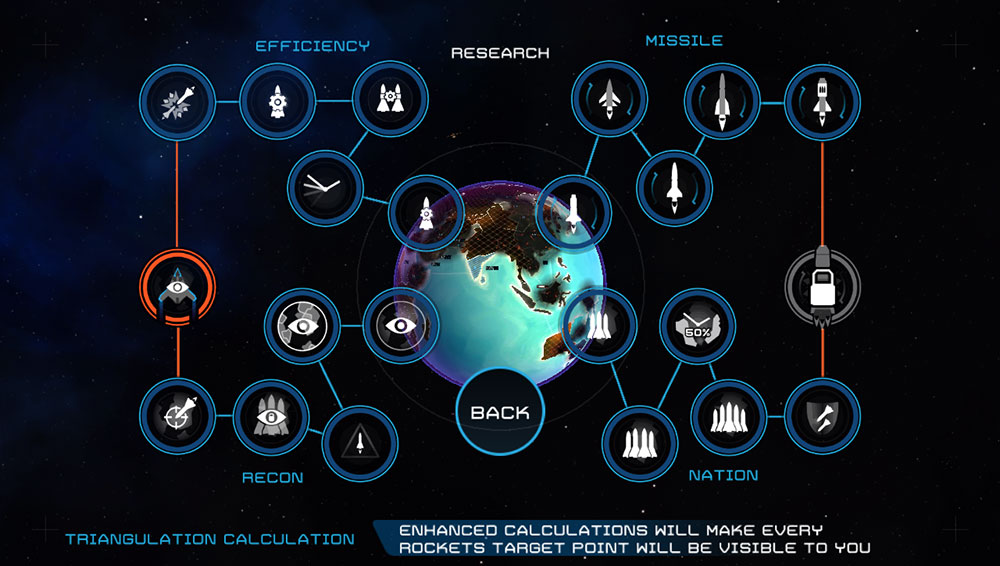 When a player taps on a given territory, a hot-select style menu pops up offering several choices for what order is to be issued. From there, players can select Attack, Intercept (an incoming missile), Build (more missiles), Research (better/faster/longer range missiles, et al), and Expand (where a neighboring nation-state gets folded into your nation’s sphere of influence). When one of your territories is issued an order, they are tied up with that order and unable to do anything else until it’s completed, including intercepting incoming missiles. There is also a cool down period after launching a missile. This provides a bit of a challenge as it all happens in real time. Players will have to juggle which nations will perform research while others are stocked with missiles to either attack or intercept (if you do a lot of intercepting, it really does feel like a modern spin on Missile Command).

As a player’s sphere of influence grows, the challenge is to keep “all the balls in the air” by keeping an appropriate ratio and layout of territories busy, while others are watching and waiting. The tech tree for the game is simple, as you research one tech, the next one becomes available, in one of two fields that focus on more/better missiles, or the radar/targeting/tracking/early warning branch. Each of the branches has an end, but interestingly enough, players can’t have both ends. If you choose to research the final tech in one branch (a stealth bomber), the other one gets locked out (a super missile that can’t be intercepted), and vice versa. Lastly, there’s also a feature players (and the AI) can use called “First Strike”. It orders all of your territories to launch a missile at your target; doing so typically solicits reciprocity, with the end result not only being massive destruction but it also shakes the planet from so many simultaneous detonations. 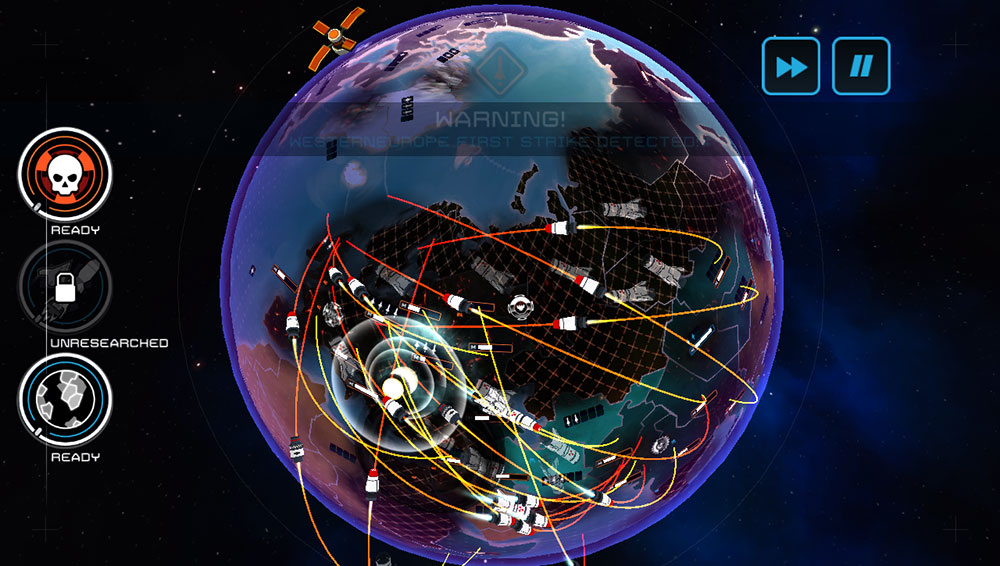 So I’ve laid out just about everything that’s in the game. Again, there’s no plot to unravel. There is a negligible soundtrack. Players simply race to global domination by trading missiles. In the end, I found the game novel for a couple of playthroughs, but I’m hard pressed to recommend it beyond that, especially since the asking price is $3.99 in Google Play. Little is being offered, especially at that price.