So we talk about some serious issues on this site sometimes as well as talking about new games being released or games heading our way soon. Interviews, game reviews and so on, a lot of generally serious things. With that said, we wanted to do something a little different and start a more enjoyable and entertaining series here on DroidGamers every Friday called Fun Fridays.

What exactly is Fun Fridays? Well we get to see a lot of humorous things happen in the gaming industry every week regardless if it is mobile related, PC gaming, or from the world of console gamers. So every Friday we are going to showcase some of what we find right here for everyone else to enjoy. Also, we encourage anyone who finds something funny or entertaining to share that is related to video games or the industry to contact us so we can include it in the next Fun Friday.

So without further delay, here is the first installment into the new Fun Friday series!

Our first item up for viewing is a video we found last week that still has us chuckling even today. The video itself isn’t overly new, having been released roughly 6 months ago onto Youtube, and features a pretty stellar reaction to using the Oculus Rift. It’s a prank but it is pretty damn funny the reaction that happens.

Our second item up for your enjoyment is in regards to the new Assassin’s Creed game (Assassin’s Creed Unity/Rogue) that was just released. If you haven’t played it yet, or followed it in the news, there have been some serious bugs happening with the game’s launch. Apparently they have a Worldwide Quality Control Director. This guy has his work cut out for him. This game way of a Tweet by David Scammell. 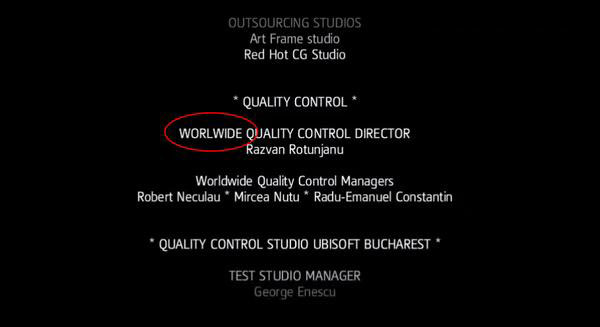 Lastly, this video actually came out in 2010 but sometimes it is always good to revisit some of the older videos. It is a trailer for the Mario Bros movie, not a real movie of course. It’s Machinima-style so made out of actual game visuals but it is pretty awesome.

So there you have it, our first Fun Friday. If you have something you want to include in the next installment, hit up the Contact Us link at the bottom of the site from the front page and use the email you find there which is 702records [at] gmail [dot] com.