Weekend Play: Birds of a Feather Flock Together: Endless Doves Comes to the Play Store

Nitrome has made a follow-up to their popular title 8-Bit Doves. In the same glorious, and almost monochromatic fashion, they have released Endless Doves into the Play Store. Yes, let all the Flappy Bird comparisons begin. In this case, I don’t think they are really warranted. The quality of this extraordinarily difficult game is unmatched in its control, atmosphere and personality. It is a straightforward game, that is as challenging as Wave, Wave to play, by Noodlecake Games. However, accepting failure with this title, is much easier, because of the delightful touches the designers have placed in the game. Endless Doves should be downloaded for the attention to detail alone. The graphics are a throwback to the early days of Nintendo Gameboys.

Nitrome knows how to make fun games with lower resolution graphics. Another title they created that was well received was Icebreaker: A Viking Voyage. They are not afraid to stray from the norm, and we can see that represented in Endless Doves. “Endless Doves – Collect Doves, Don’t Crash! He dreams of flying.. Who is he? Why does he crash? How does he fly? That doesn’t matter. What does matter is obsessive bird collecting!! Collect those birds and beat the scores of friends and people you don’t even know! Brag on the usual social network hangouts then collect even more birds and do it all over again!” – Nitrome 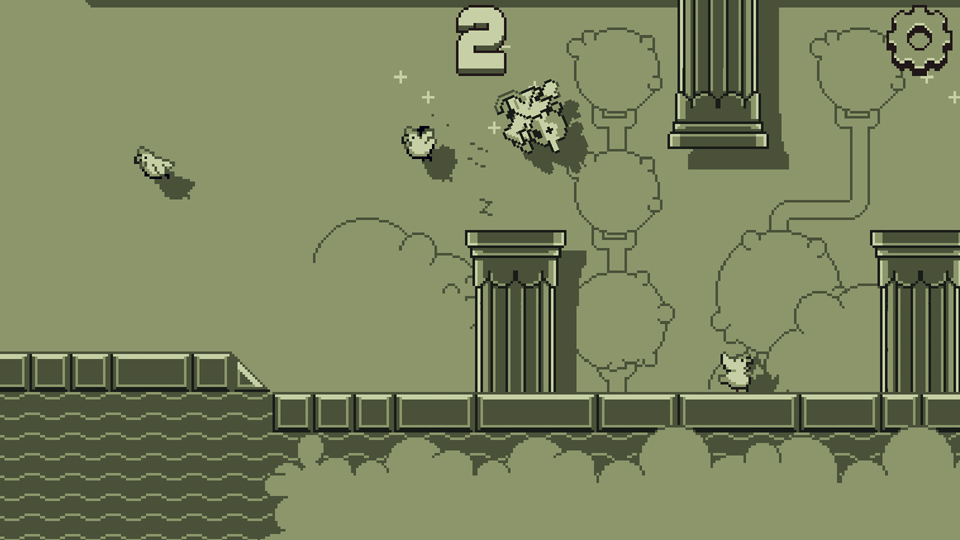 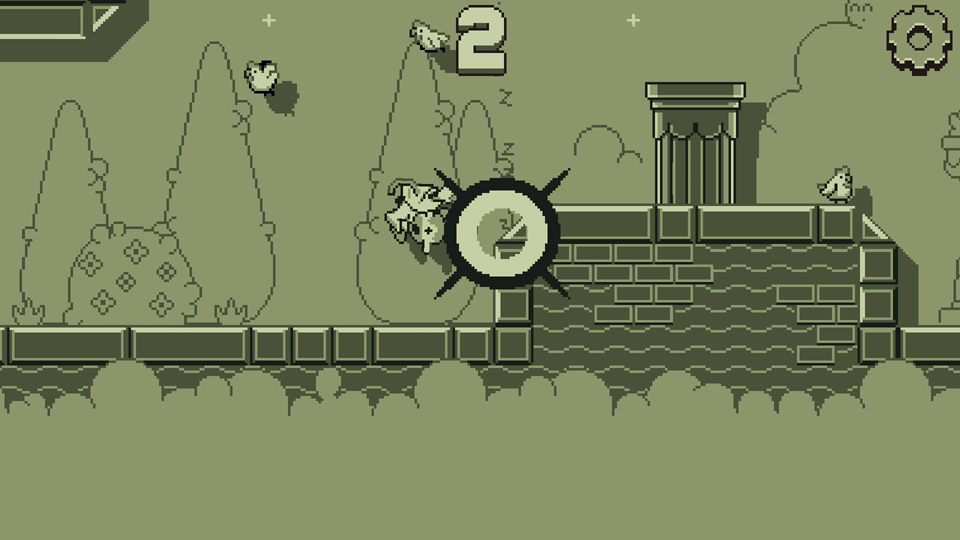 I have admitted previously to not particularly liking these types of games. Yet, there is something about Endless Doves that I enjoy. I think it is the simple fact that it is a game that knows what it is about and it sticks with it. It is about bird collecting. The only way you are going to collect more birds, is to be able to navigate the main character (The Dreamer) through the ever changing landscape. To aid you in this difficult task are very simple controls… two buttons. One button rotates the Dreamer to the left, and the other to the right. It is all about anticipation, and knowing just when to touch the screen. Sometimes you will have to maneuver him and angle him just right. At other times, it means letting him float for very brief periods untouched. It is simple in design, and it is difficult… and it is frustratingly fun.

As difficult as this game is, the controls are quite forgiving. When you make a mistake, and you will. It won’t be because the controls don’t do what they are supposed to do. Knowing when to rotate your character will lead you to collecting more birds. Your score is attributed to how many birds you collect. You collect the birds by flying close to them. Once you do, they begin to fly behind you. I did not realize that until later, because I could have collected more birds, but I didn’t fly close enough to them. Proximity is the key when attempting to collect the birds.

The graphics are comprised of pixels and four colors. The music is cheerful enough to keep you going, which is important, considering how often you will be restarting this game. The reload times are quick too, which is great. The art work in the game is impressive, even though the chosen style is limited pixels. There has been a good deal of work put into how good this game looks, and it shows. The environment the Dreamer explores is quite expressive, with fine touches here and there. Once again, it shows that Nitrome knows how to make a good looking game, with an uncommon palette.

The number of birds you collect, continues to grow after each play through. This is important to note, because collecting more birds, allows you to unlock different types of birds in the aviary. The birds act as the in-game currency. The first bird you are able to unlock is a chicken, the next is a pigeon, and it continues from there. In all, there are ten different birds or items to unlock. You do not know what the creature is, until you unlock it. This adds to the depth of a game with a very simple premise. It makes it more enjoyable to play, because there is more to unlock if you are willing to stick with it. Don’t worry, you amass the birds you collect pretty quickly. Even if you don’t fly too far. I have collected over 150 birds through multiple attempts, and the highest bird count I have obtained on any run is 13… and that has only happened once. 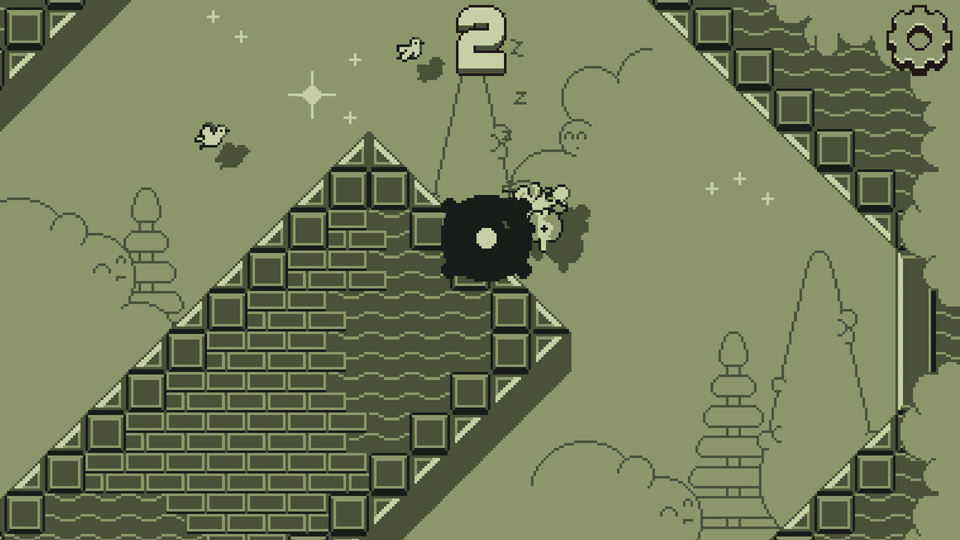 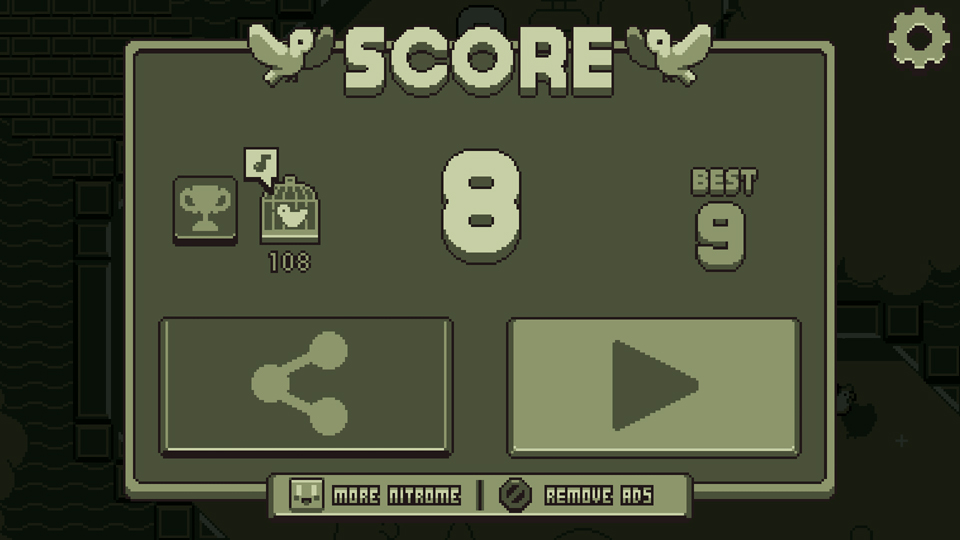 The game is integrated with Google Game Play Services with 8 achievements to unlock and leaderboards. I have unlocked three of the eight already. One for collecting over 100 birds through playing the game multiple times, another for crashing The Dreamer 100 times, and another for unlocking the first bird in the aviary. The game is free to play with in-game ads that occur after 3 or 4 runs, so that means no banner during game play, which is appreciated. You can unlock ads for the cost of $1.61.

Endless Doves is a great game to play in my opinion, even though it is challenging. When you complete a longer run and collect more birds, you definitely feel a sense of achievement. The graphics, art work and controls, work seamlessly together to create a world bursting with pixels, that you should explore. It won’t cost you a thing to download, so give it a try. Don’t forget to grab a handful of patience as you sit down to play this one. When you do, you will be pleased to be able to say that birds of a feather do flock together… when you collect them, in Endless Doves.