Goon Studios Teases Us With Their Next Project: Monster vs. Sheep

Just a few months ago, Goon Studios, a game developer based in Pasadena, California, released the artistically adorable and enjoyable platformer/runner, Boogey Boy. If you haven’t played it yet, you should. It is fun, unique and definitely worth your time. We’ve been in touch with the Goons, since they released Boogey Boy. Recently, they were kind enough, to share an exclusive piece of art for their next project, Monster vs. Sheep with, Droid Gamers.

Just prior to sharing the image with us, a five-second video was released on YouTube, in anticipation of the upcoming game. In it, we see an adorable little sheep, running from someone or something. The animation was created by Ivy Flores, who is one of the Goons that handles… well, 3D animation.

Adi Ekowibowo, is the Project Manager for Monster vs. Sheep, and he gave us a quick summary of the game. “Monster vs. Sheep is a fun-filled arcade, free throw extravaganza, where you chuck fluffy sheep into a giant monster’s mouth, in order to save a coastal city from impending doom. Your mission is to stuff the monster full of sheep and stop his rampage!” – Adi Ekowibowo

When you put the summary of the game together with the five second video, could it be that the sheep is actually running away from you? I can’t imagine how this game will look, or how it will play. What I can say, is that based on their previous title Boogey Boy, the game’s artwork should be fascinating, the game play fun and challenging, with an easy learning curve. We will have to wait and see how it all turns out. 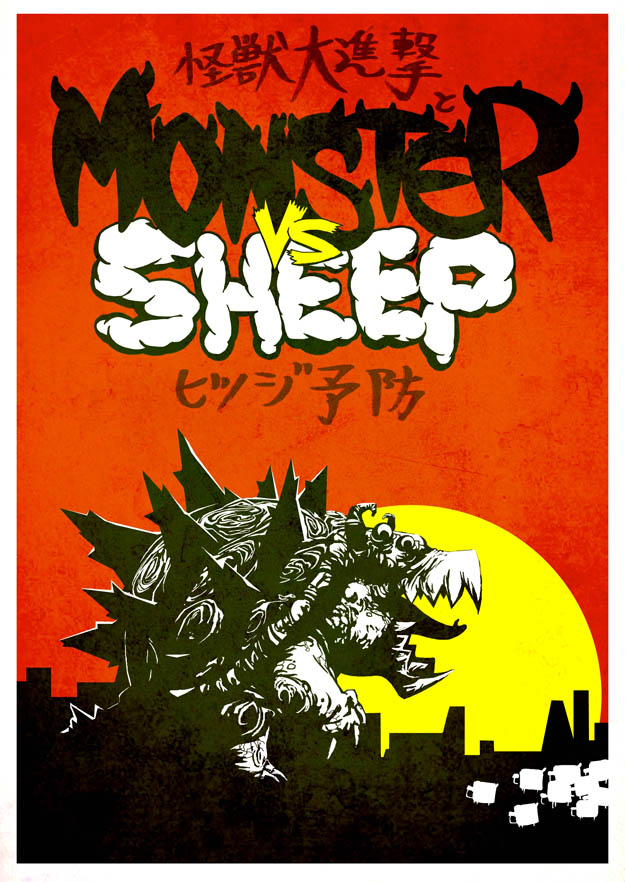 As of now, we don’t have a release date or price for Monster vs. Sheep. We do know it will be available for Android and iOS devices. In the meantime, check out the cool, almost vintage image/artwork they shared with us at Droid Gamers, and now we are sharing it with you. What does it remind you of? Godzilla anyone? We want to thank Goon Studios for keeping us in the loop! As soon as we know more about the game, we will let you know. If you are interested, you can also see a different piece of artwork Goon Studios released a couple of days ago for Screenshot Saturday on their Twitter page. If you haven’t downloaded Boogey Boy yet, what are you waiting for. We’ve made it easy for you and included the link below. We hope we hear more soon from Goon Studios, about Monster vs. Sheep!