Quick Play Review: Planet NamNam is a Colorful and Refreshing Arcade FPS from the Game Cooks

The first thought I had when I looked at the screenshots of Planet NamNam from the Game Cooks was, “This looks like it will be a lot of fun!” The art work is supremely original, the story line is funny, if not humorously creative, and the genre, arcade first person shooter, is one that could use a breath of fresh air. Did the Game Cooks put the right amount of that special sauce into their game?

The Game Cooks are no strangers to the Google Play Store. They have released a few interesting titles in the past, such as, Power Smash, Captain Oil, and Escape from Paradise. The base of operations for their studio is in Beirut, Lebanon. Their latest project, Planet NamNam is well conceived, and enjoyable, though the difficulty ramps up, probably a little too soon.

Droid Gamers Quick Play Review: This is a quick play review from Droid Gamers. It gives you the high points, what to look out for, and maybe what could be made better in an update from the game designer. It is a quick summary, so you can know whether the game is worth a download or not to you. So many games are being released so quickly, this well help us get the news out to you sooner, and hopefully, help you make a good decision, about what should be added to that ever decreasing amount of storage space you have on your mobile device. 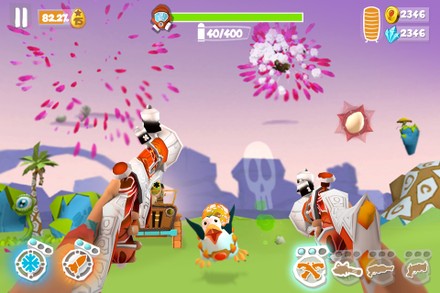 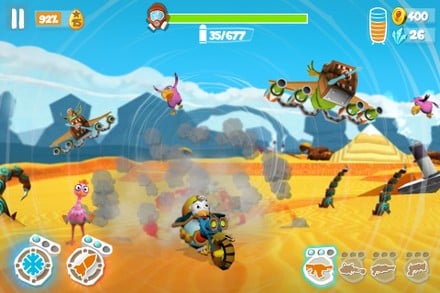 “The world’s most significant monuments have been stolen by invading birds and brought back to Planet Nam Nam! The fate of humanity’s landmarks rest solely on our hero – P1W! His mission is far from easy – he has to travel to Planet Nam Nam to fight those vicious creatures and get back what is rightfully ours! Help P1W on his quest to retrieve our monuments and teach those crazy birds a lesson!” – Game Cooks

My first impression of the game is that it is satisfying to play. It is a good game. You can tell the Game Cooks put a lot of thought into the story, the character design, the world environments and the weapons that you will use. One of the first things that stuck out as not being as well implemented as everything else, is the voice acting. I find that interesting because, the sound effects are good, and the music fits well within the scope of the game… not so much with the voice acting. However, this is something that can be easily modified. On a whole though, Planet NamNam is worth playing.

The game is described as a first person shooter arcade game. It definitely has that arcade feel to it. It is a Duck Hunt game set in the future. Though the screenshots show the weapons, the only time you are going to see them, is when you are reloading. Other than that, you are rapidly tapping the screen to get rid of the NamNam birds. I would love to be able to see the weapons in use more, because their designs are uncommon, and it would add another level of detail to a game that is plentiful with good artwork/graphics.

Your enemies, the NamNam birds, fly across the screen in varying speeds dropping eggs (bombs). If you let too many eggs drop, it is game over. What is nice about the enemies is that they vary greatly in type. The Game Cooks have done a really good job of creating a species of birds, that have different abilities, and it shows in how they attack you. Some of the birds come straight at you riding on vehicles, while others speed across the screen, almost undetected. Each level has multiple waves of birds that you have to defeat.

The scoring system is rather typical. The more birds you hit, the higher your score. If you are able to hit them in a cluster, your score is multiplied with a combo. Points and crystals are used to upgrade your weapons, and they also allow you to buy different power-ups. The pricing structure for some of the items seem a little bit on the high side, but it doesn’t appear that you won’t be able to upgrade your weapons, if you just continue playing the game. No, I don’t think it will require a lot of grinding to get there, but again this is a quick review. From my estimation I think you can upgrade your weapons easily, but maybe not as quickly as you want. The good thing is, you get newer weapons added to your arsenal pretty quickly. 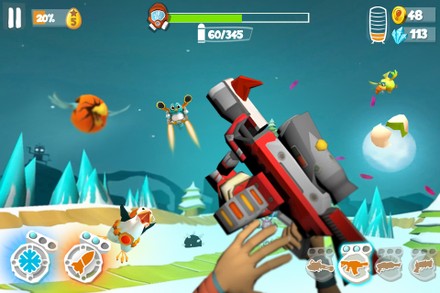 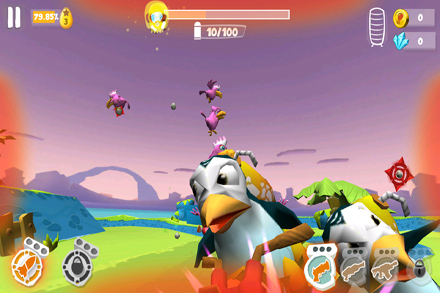 Planet NamNam is a free to play game. There is an in-game store where you can pay actual money to get gems and coins for upgrades, if you want to speed up the process. Though the game is free, I have yet to see ads in the game, the multiple times I have played it thus far.

The game is not integrated with Google Game Play Services. That means no leaderboards and no achievements, which is a disappointment, because the cast of characters is full of colorful and unique NamNam birds. It would be great to have achievements for shooting a certain number, or types of birds, or destroying a certain quantity of eggs, etc. The game’s world is so interesting, I can see where achievements and leaderboards would really take this game to the next level of fun.

Aside from the voice-acting, and the extremely fast ramp up in difficulty, Planet NamNam is worth the download if you like arcade shooters. It is refreshing in its originality. The Game Cooks have put together a game that you will enjoy, if you forgive a couple of design decisions, that can be easily fixed in an update or two. Hopefully the Game Cooks will continue to support this title, because it has the opportunity to do quite well with a few more finishing touches.