Alien Breed Review: A fun look back at a 90s top down shooter

Alien Breed is a simple, top down shooter that was released on a couple of desktop computing platforms in the early 1990s. Its visual style looks like it is cribbed off of the movie franchise of Alien, at least in the appearance of the hostile life forms that players frequently encounter. Alien Breed includes both the original release and subsequent releases in their original graphics, as well as a remake of the same levels with up-scaled graphics.

The backdrop for this game is that players assume the role of a space marine, of sorts. It is the player’s job to clean the aliens off of a space station at all costs, including the destruction of said station. That being said, there isn’t much of a story to speak of. Players get some text to read in between levels that will contain your objective, but it doesn’t go much beyond that. Each level is a maze of hallways, corridors, rooms, and the occasional floor trap that players navigate, with little variety on most of them. Typically, a given level requires players to execute some combination of the following: navigate to the end and/or kill a boss and/or toggle a switch to begin a self destruction countdown and race to the exit before time runs out. Rinse and repeat. And as much as it sounds like I’m complaining about these things, I have to admit that I enjoyed the game and was really indifferent towards its repetitive feel. It simply didn’t detract from the game for me. 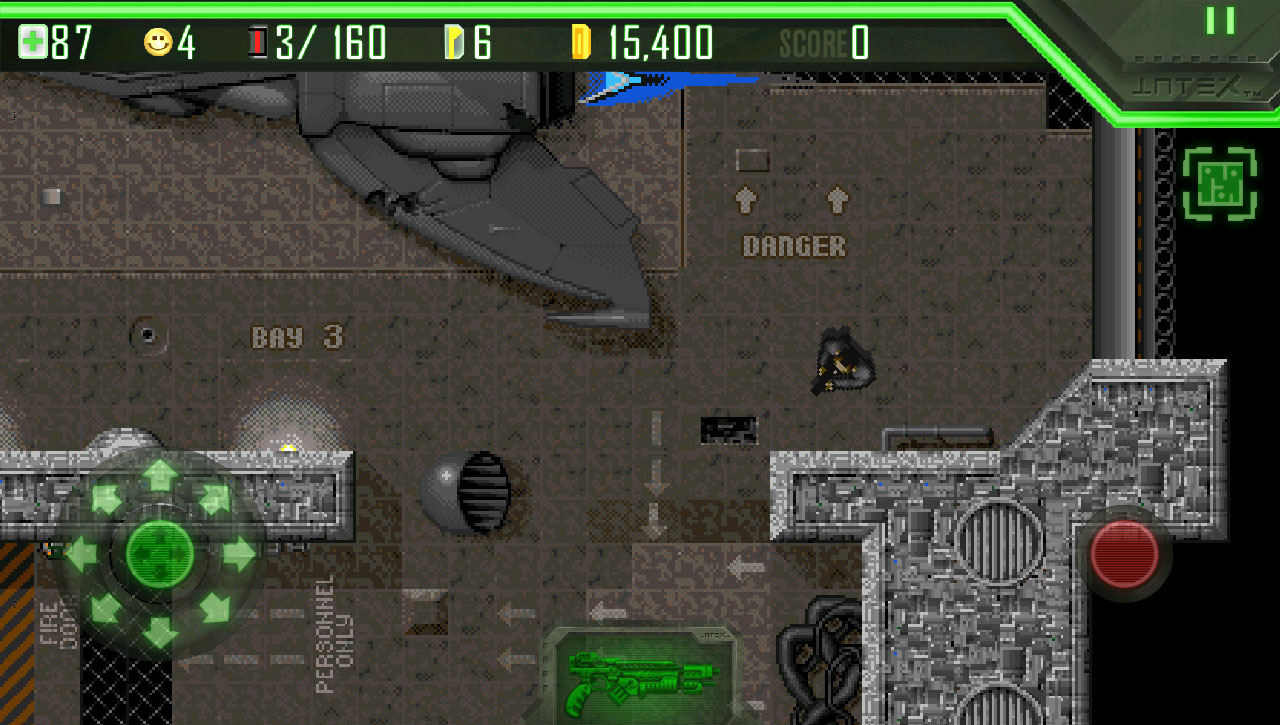 Alien Breed currently includes three different releases, and promises more to come. It is comprised of the original six levels, four bonus levels, and a special edition containing twelve levels, all of which are available to play in both the classic mode as well as the enhanced mode. The maps and layout are identical in either mode. That being said, there are differences beyond the graphics. There are piles of cash, keys that will unlock doors, extra lives, and Med-kits that restore health. The cash found (or purchased through IAP) can be spent on new weapons, or more lives/health/keys/ammo, all of which can be purchased from the pause menu. Upgrading away from the standard pea shooter that players start with (to almost anything), and the mini-map, are huge boons in the game. Every time you load a level, the loot is always found in the same spots, but where you find them in the classic version will differ from where they will be in the enhanced version.

The other major difference between them that I noticed was with the virtual sticks, where there are two in both versions. With the classic version, you control the direction with your left stick, and activate the fire button with your right, firing your currently selected weapon strait ahead, so you need to walk in the direction you choose to fire in. With the enhanced version, players can then choose which direction to fire in, separate from the direction of movement, allowing players to walk one way and shoot another. A very nice feature in addition to the upgraded looks. There really isn’t anything for a soundtrack, despite a toggle for it in the settings. 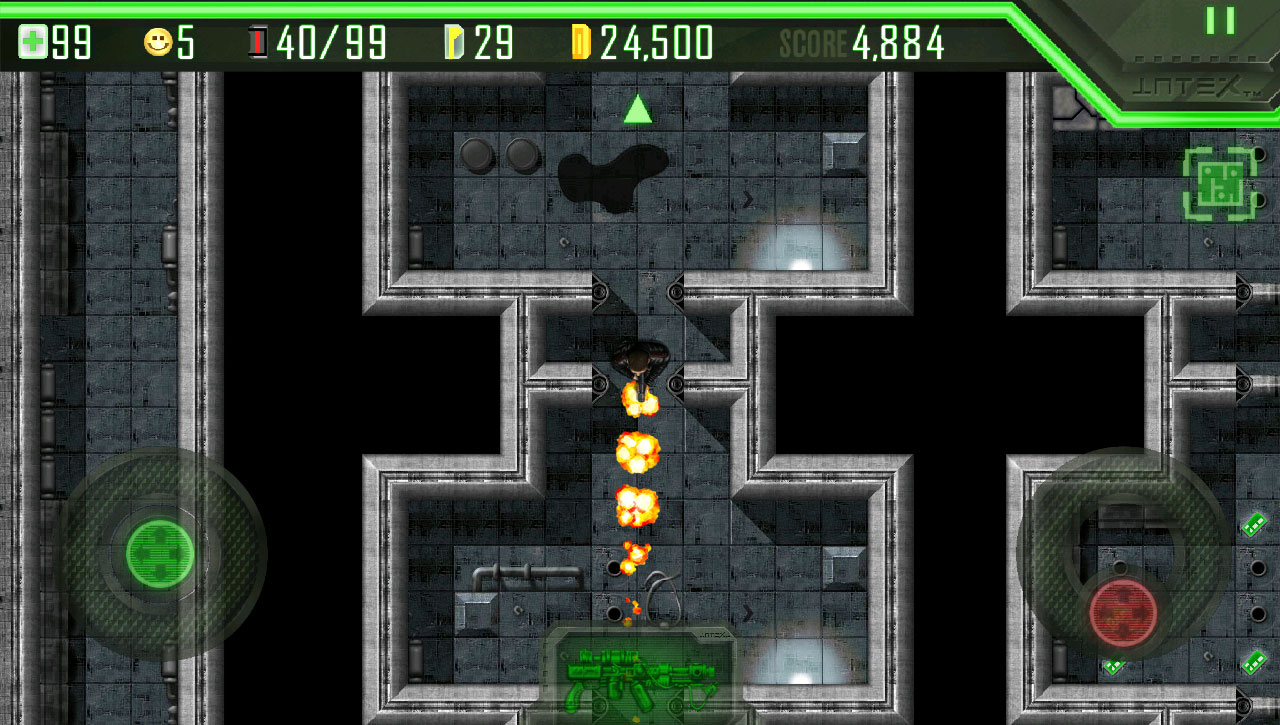 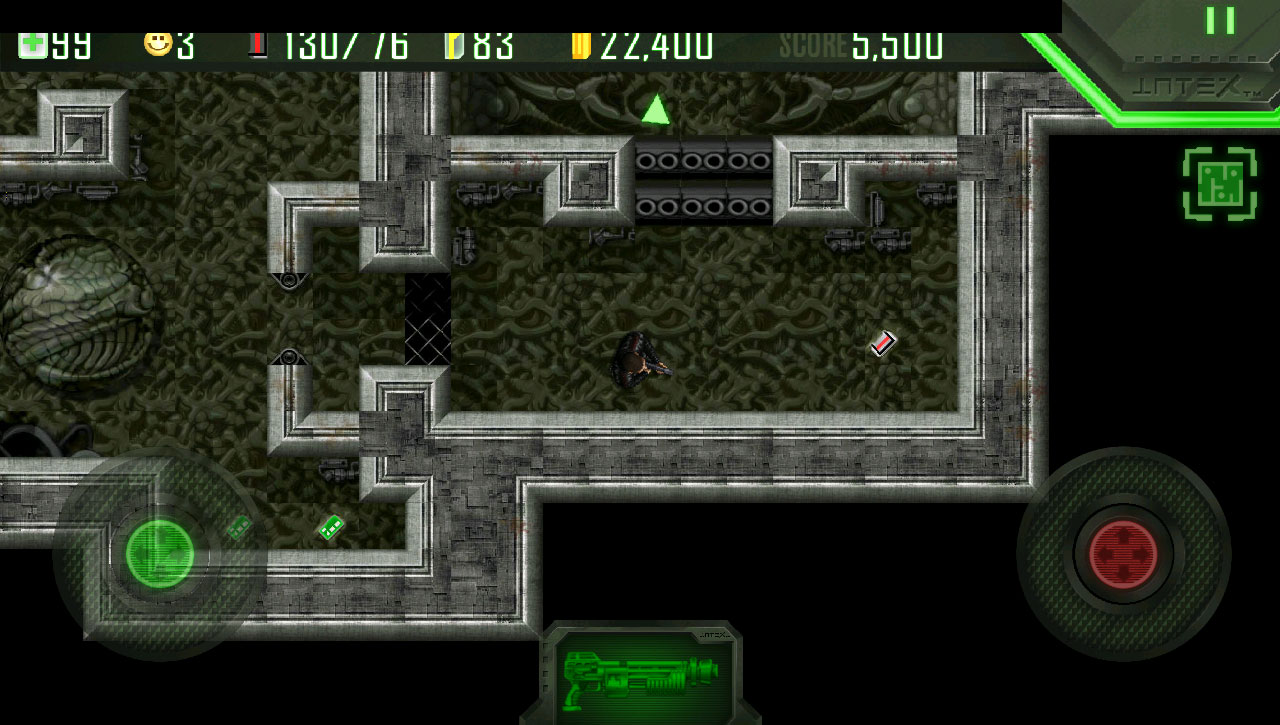 In Alien Breed, there is no save/load mechanism. Your progress is saved as you go, as if you have a single save file, though like the gameplay it will differ a bit between the classic and enhanced versions. In the classic, your cash, health, ammo, extra lives, and keys are all saved,  but you will always start at the beginning of the level with everything reset (loot replaced, doors locked again, etc). In the enhanced version, opting to continue vs restarting the level (which is a choice you don’t have in classic mode) will pick up right where a player left off. What’s interesting is that your progress can be carried over between classic and enhanced as often as the player would like; completing a level in classic will show as completed in enhanced, having twenty keys in one format will be there in the other, weapons purchased while in one will carry over to the other, and so on. Save for the aforementioned differences, it’s like the enhanced version functions more like a skin for the classic.

On the whole, if you’re a fan of the Alien franchise or top down shooters, this is an easy recommendation to make. It’s currently available in Google Play for around $1.