The Wolf Among Us: Episode 1 Review [Spoiler-Free]

TellTale Games lives up to its namesake, having become synonymous with high quality storytelling in the video game medium. After gaining industry recognition and commercial success with their breakout hit, The Walking Dead, TellTale was faced with a tough act to follow. With the release of The Wolf Among Us, many gamers have asked whether or not this game lives up to its predecessor. Be curious no longer as I dive into a spoiler-free review the first episode of The Wolf Among Us.

The game is a prequel set in the world of the popular Vertigo graphic novel series, Fables. For those unfamiliar with the graphic novel, Fables is a story in which the characters of the venerable Grimm’s fairytales live and hide in the real world. Styled after a gritty noir-drama, players guide Bigby Wolf, the sheriff of Fabletown, through a murder-mystery adventure that is equal parts sleuthing and equal parts butt-kicking.

The Wolf Among Us employs the same game mechanics featured in TellTale’s previous effort. Players will converse with NPCs, explore homes and buildings, conduct investigations and get into fights with other characters along the way. Whereas The Walking Dead is very heavy on the exposition and moderate on action sequences, The Wolf Among Us achieves a perfect balance of narrative and action. The game’s establishing segment is a fairly long fight sequence that sees Bigby (a.k.a. The Big Bad Wolf) square-off against his long-time nemesis, The Woodsman. Also interspersed in the first episode’s narrative are a chase sequence and an epic bar-fight that brings the chapter to a close. For those that felt that The Walking Dead was fun but not “an actual game”, The Wolf Among Us seems to address that complaint rather handily. 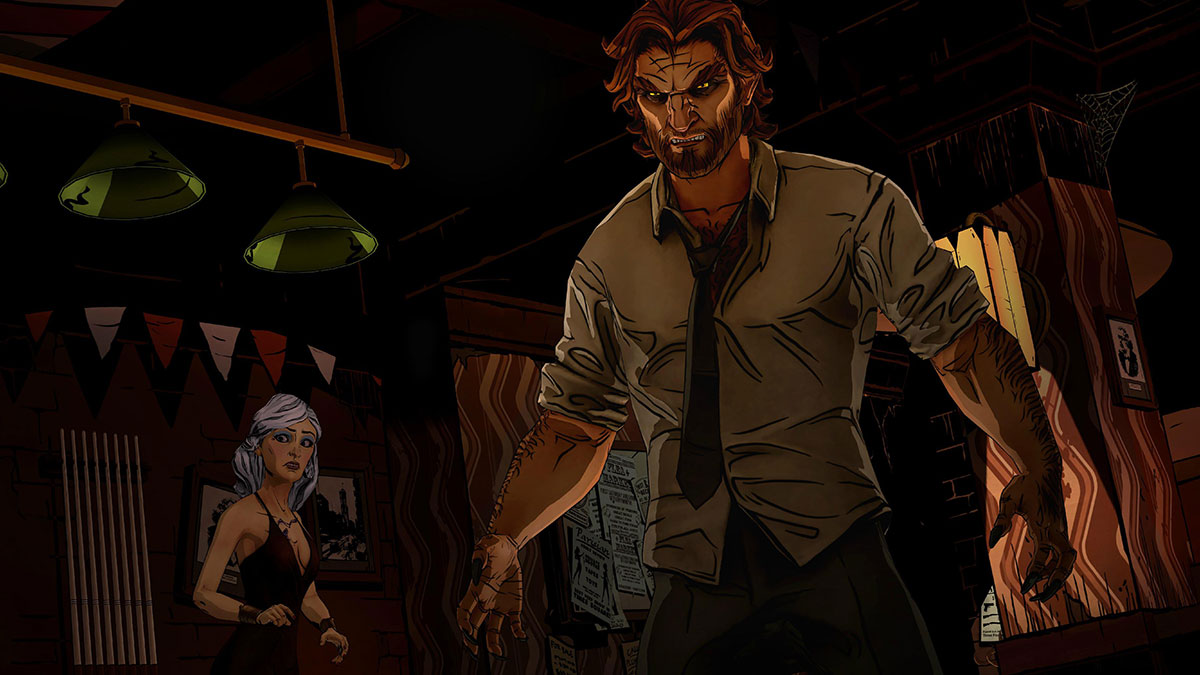 Simply stated, the aesthetic of this game is comic book art put into motion. The textures are sharp, the colors bold and the animation is buttery smooth (note: I reviewed this game on an LG G3). More importantly, The Wolf Among Us compares favorably with its console and PC counterparts, looking nearly identical down to the shader implementation. The game is absolutely gorgeous.

The response time for swipes and taps seems to be 1:1. Lag or poor input detection need not apply when it comes to this game. This is especially appreciated for the first episode’s chase sequence, which demands precision and timing.

The voice acting in this title is top-notch, not just in terms of casting, but delivery. The emotional undertones of conversations are conveyed clearly through the cast’s remarkable acting as much as it is from the Hollywood level script writing. The performances of the cast never leave you doubting the truth of any character for any moment. 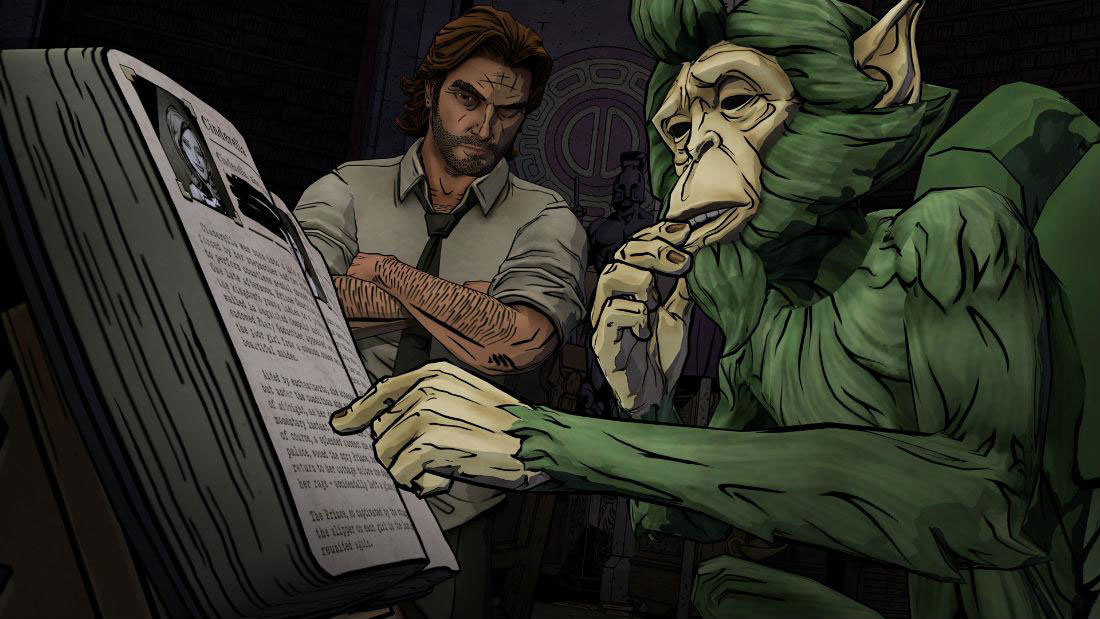 Even though The Wolf Among Us has more of an action slant, the game is still largely based around conversations and narrative. As such it is important for the story to be rock solid. Thankfully, the story for this game is outstanding. Without giving away anything, the rising action of the story is the unexpected murder of an unidentified Fable.

Much of your time will be spent looking for clues to help uncover the identity of the victim and searching for suspects that are connected to the murder. What starts off as a single homicide quickly turns into a cover-up, a potential suicide (determined by the player’s choices) and a second murder.

All of this drama is heightened by the intense distrust that the citizens of Fabletown have for Bigby. Because of this distrust, you are compelled to choose between actions that get results or choices that don’t scare the daylights out the already uneasy townsfolk. The story is so enthralling that I played the entire episode with my wife in a single sitting. Fans of ABC’s Once Upon a Time or NBC’s Grimm will find themselves right at home with the mix of crime-drama and fantasy. 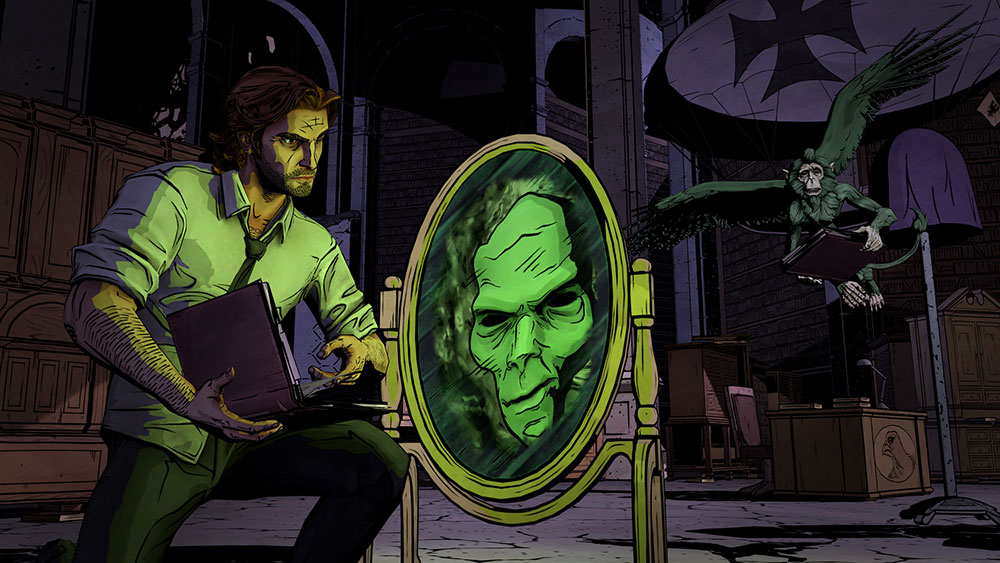 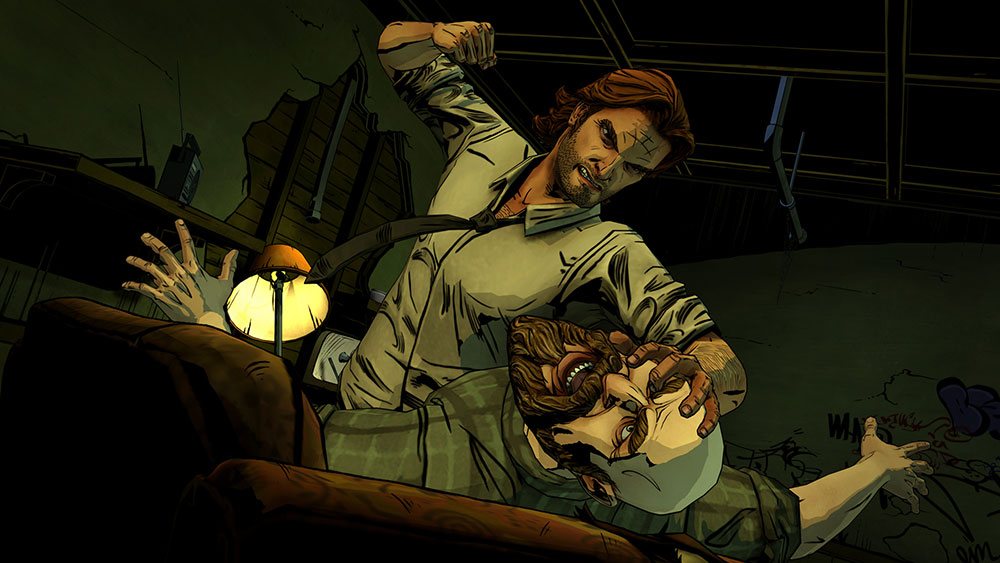 Because the narrative is driven by choices, both moral and circumstantial, there is more than enough reason to replay the first episode; build better relationships with certain characters, save other characters from death or manage Bigby’s strained reputation amongst the citizens of Fabletown. Because the first episode sets the direction for every subsequent episode, what happens the first time around can lead to a different story experience for every player.