While your mileage will vary with Age of Zombies, depending on how much you simply enjoy trying to survive increasingly challenging waves of zombies, there is no denying its charms considering the very reasonable price of admission. 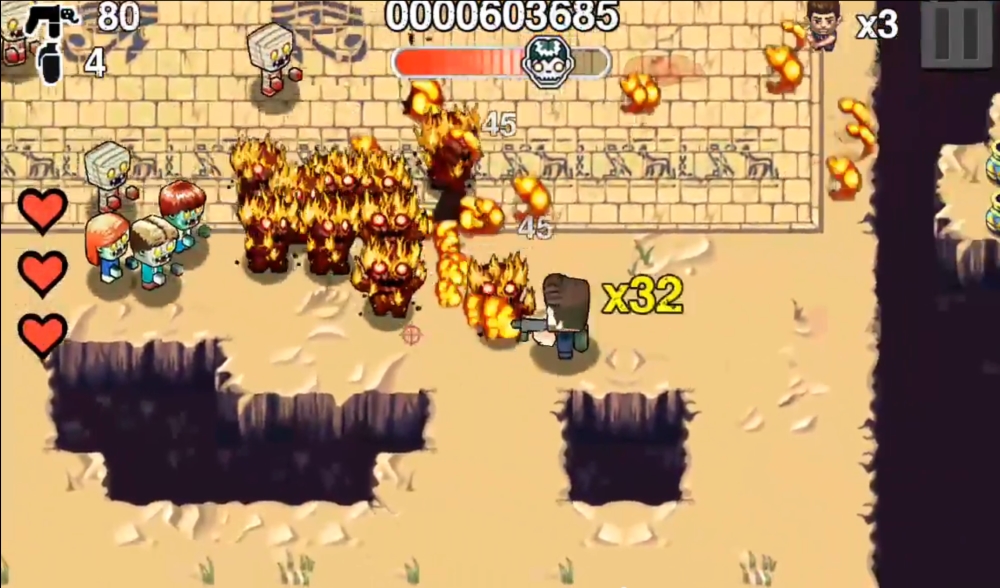 I won’t consume space trying to explain this silly romp through multiple eras in history; other than providing a few simple laughs the game isn’t about narrative, it’s about action. As swarms of the period-appropriate dead come shambling your way you’ll need to be quick and decisive, weaving your way to power-ups that are absolutely essential to keep you restocked and alive. There’s a satisfying arsenal available to you over the course of the game, ranging from more traditional weapons (SMGs, rifles, and shotguns, OH MY!) to the more destructive (the buzzsaw and flamethrower are hard not to enjoy). There are also power-ups that help you move quicker (a nice nod to Back to the Future 2 with the hoverboard), a shield, and then even special contraptions like a sentry gun you can deploy to help dispatch the walking dead for a short time.

You’ll likely want to start out with the game’s story mode since it will walk you through the basics of the game while providing a slowly climbing level of difficulty. If you’re a veteran of this style of game it isn’t likely the entirety of story mode will truly challenge you, but once you’re done with the story mode appetizer you can move on to the more difficult main course in Survival Mode. Once you choose your map/theme you’ll be dropped into a situation more akin to a classic arcade experience with wave after wave of zombies and no chance of survival, just the thrill of getting a top score. As of the time I wrote this review, unfortunately, on-line leaderboards still weren’t yet working as that could certainly provide some additional motivation to continue to plow through the “Deadite” hordes. Another fun bonus in this mode is the ability to ride a dinosaur for a little while, chasing down and devouring zombies almost like Pac-Man chomping down some blue ghosts. 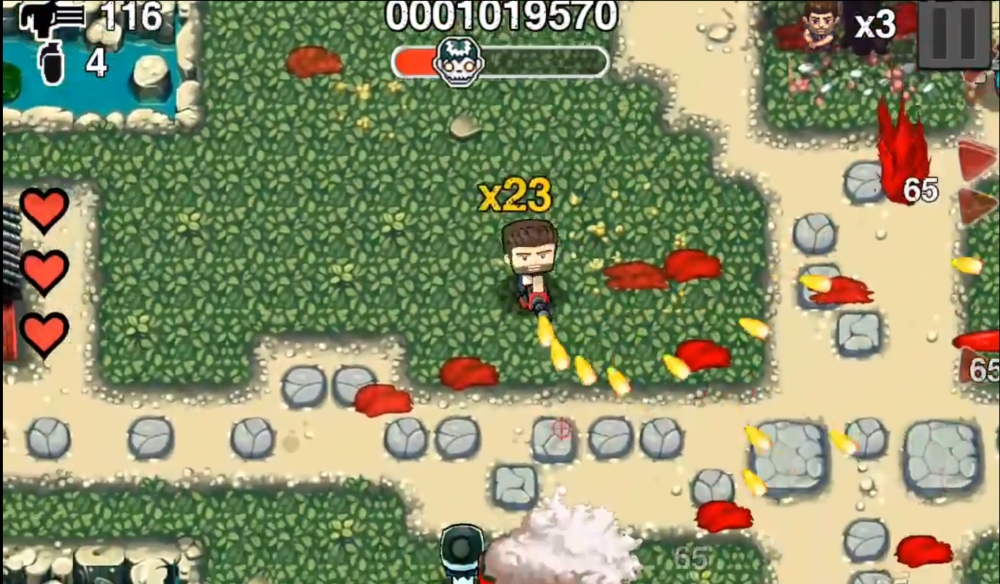 While it isn’t a game that makes much use of the power of the Shield it does make excellent use of the Shield controller, feeling smooth and natural as you progress. I will absolutely say that the difference in trying to play the game with and without a controller is night and day. While the game does provide on-screen controls, with an option to keep a fixed position or have them float, I’ve never found controls of this type workable for sustained sessions. In the end I always get bogged down by having to reposition my hands or me mentally losing track of where a given thumb’s “center” is. Maybe some people have gotten used to these sorts of controls, I find them too crippling to enjoy things. You’ll need to use your own best judgment if you don’t have a controller.

Graphics: 4.5 – The game isn’t meant to be high art and it doesn’t appear to be doing anything that should be taxing the Tegra chip in any meaningful way. That being said the art style is pleasing, consistent, and varied from locale to locale. It is obvious a good deal of effort has gone into the look of the game and the result is appreciated. (A note, with the Season 2 update the visual appearance of the characters took on a more 3D-ish look which has been the subject of some controversy over whether it was an improvement)

Sound: 4.5 – While the music is well-matched to each locale it is the voice work that I really enjoyed with the game. For each place and time there is a different set of voice overs for the game and while it is a small detail it helps make the game a bit more fun. In particular the voice in ancient Japan with its somewhat silly delivery (think the SNL skit) was good for a consistent smile on my face. Again, this area isn’t terribly ambitious but it executes its plan very well.

Gameplay: 4.5 – While I won’t claim it is the best twin-stick shooter I’ve ever played (I’m more partial to the frantic pace of Geometry Wars and nothing really beats Robotron) this does provide a lot of fun and is the best game of this kind I’ve played on Android so far. There are a variety of enemy types that force strategic decisions to be made, the power-up placements and variety force you to keep moving and adapting, and the game absolutely gets to be a challenge once things get rolling.

Control: 5 – With a controller there’s absolutely nothing I can imagine complaining about. Control is tight, accurate, and comfortable on the Shield. If you’re controller-less and force to use the touchscreen controls I would actually recommend avoiding the game unless you’re either experienced and good at using them or you’re simply a masochist who doesn’t mind effectiveness being sacrificed with every shift of your hands.

Lastability: 4 – If for some strange reason you’re in the game for the story only this score would be lower since the Story mode will likely be completed handily in a few hours (or less). If you’re a fan of this type of game in general and are in search of a quick fix though this certainly delivers. I’d actually rate it a little higher if the online leaderboards were working (which I’m sure they will at some point) but without being able to see how that shapes up for motivating people (hopefully the delay is related to them trying to prevent people cheating as well) we’ll make it slightly lower where you’re simply competing with yourself for high score.

Overall: 4.5 – For the dollar I paid for the game I don’t think I have a whole lot to complain about. It delivers what it promises and does it with more flair and humor than I would have expected. I’m hoping it finds success to help spur more development in this genre as more people take the plunge and get controllers or simply continue to buy games without one and make do. Hopefully will see you all soon on the leaderboards!