Exiles: Far Colony is the latest game from Crescent Moon games, also made games that you might have played like Neon Shadow, Mines of Mars, and the Ravensword. Like Ravensword before it, Exiles is an open world Action/RPG, only its the SciFi counterpart to Ravensword’s fantasy theme. While the undertaking is ambitious and full of potential, the game falls short of what appears to be Crescent Moon’s intent.

Within Exiles, players find themselves on a desert world called Aurora 9, in the year 2375. Players assume the role of a customized character (choice of class, gender, and face), in the employ of the colony government. The class distinctions aren’t much, with really the exclusive ability being the sole delineation (practically speaking). There are three choices available to players: Soldier, Scout, and Adept. The soldier’s ability is akin to the “force push” from Star Wars (with a much more limited range), the Scout can briefly turn invisible, and the Adept can slow down time. The population is divided up between those living in the colony, and those choosing to live outside of it and its protection (hence the name, Exiles). As the story unfolds, you find out that the governor isn’t what is presented publicly, and play a role in how things play out. Throughout the game, players have the opportunity to explore towns, as well as open desert. There’s also a cavern and a submerged alien temple, as well as day and night, to round out the main environment of Aurora 9. Here is where some of the problems crop up. 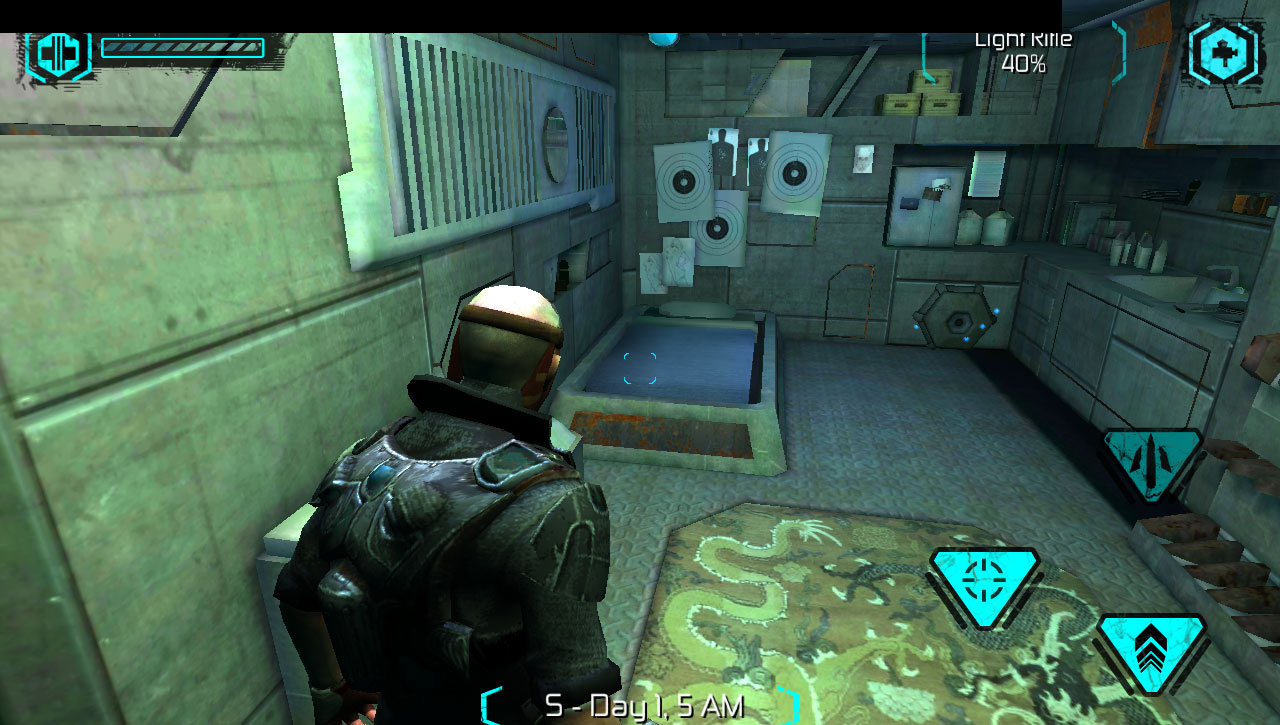 The story is told in around six missions or so, so that portion of the game ends quickly. There is dialogue with voice work, but the voicing will cease part way through longer portions of dialogue, and it’s not used at all in other places, making for a very inconsistent implementation. And there are no real choices in the conversations, so players are merely acknowledging the sentiment of their character to keep things moving. There is a small variety of tech in the game. Vehicles are used, and include hover bikes and mechs to navigate the wilderness, and both types of vehicle use the same fuel. And while these are a nice touch to the feel of the game, there isn’t much for wilderness to begin with. While the game is broken up into observed large desert areas, they’re wasn’t much beyond the vastness that appealed to me. I didn’t notice the day/night (with a clock counting days and keeping time) system having any effect, with the wildlife or anything else (sky not withstanding). At times I noticed the landscape didn’t “hold up”, where I would walk beneath landscape that I was supposed to be walking on top of.

One of the alien life forms is supposed to be submerged in the sand, to spring up out of it with little warning. All too often though, I could see them hover above the sand briefly, before falling into it, as if the game was “dropping” them into place. Of the various alien life forms, I didn’t see more than a half dozen different types. Maybe it’s just me, but I would’ve expected to encounter more. I found the number of NPCs to be the same. Towns simply felt vacant. There’s a handful of different firearms in the game, but there’s no more than one of each type. So taking the sniper rifle as an example, there’s only one in the game and it can be upgraded incrementally, but there’s a cap to how much it, along with the other weapons, can be upgraded. 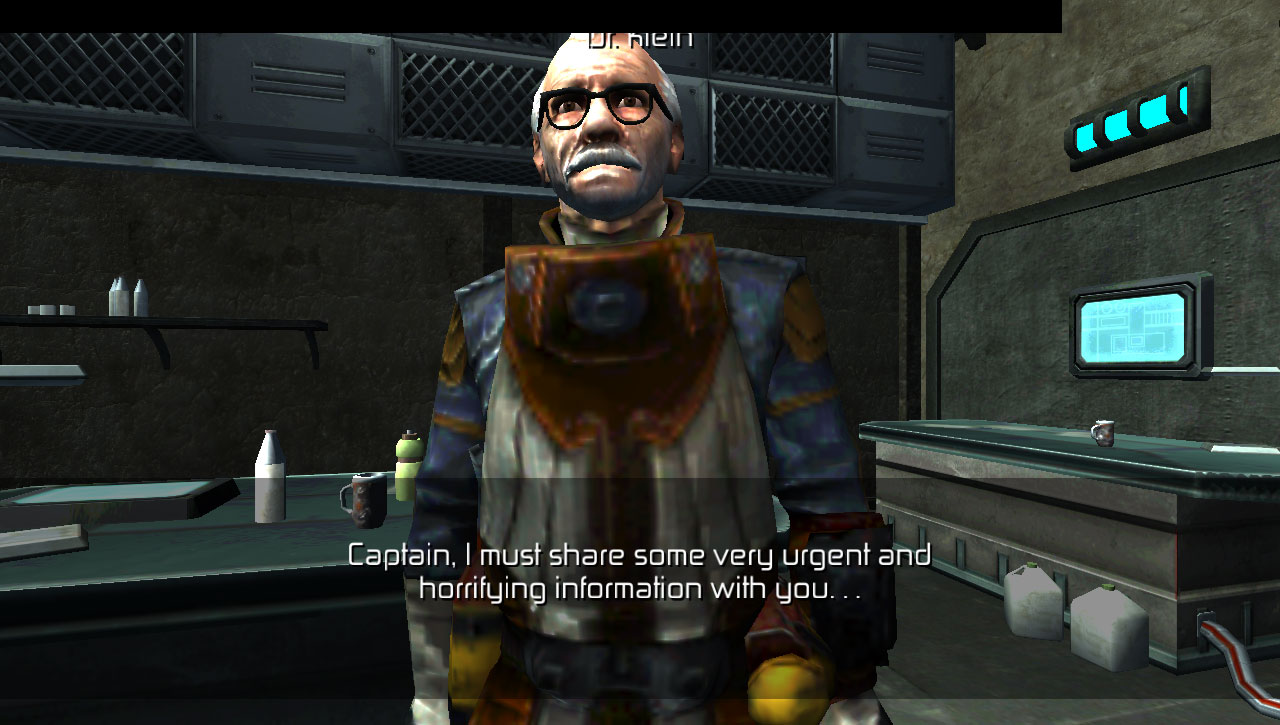 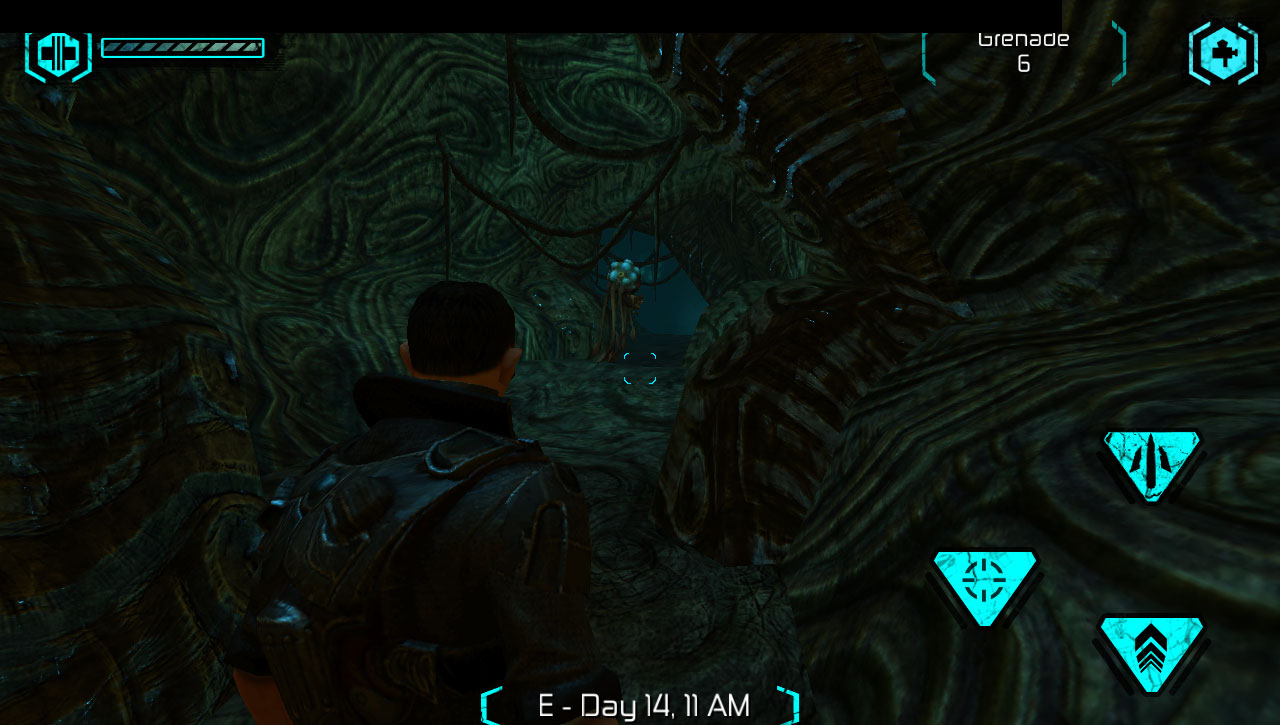 Players can purchase something called blueprints within the game that are used to affect these upgrades. Really all they accomplished though, is to incrementally increase the amount of damage a given weapon. They can’t increase firing rate, accuracy, zoom rate, or anything else. The same limitations apply to the rifle, pistol, sub machine gun, rocket launcher, and the like. Save for the rocket launcher, all the firearms use the same ammo. In the end though, it feels like there isn’t much to the weapons in general. They’ll level up as players use them, but like the day/night system, I saw no tangible benefit to having a higher level weapon.

The gameplay proper isn’t all bad. For starters, I could run the game fairly well on my 2012 Nexus 7. Despite all the flaws I saw in the game, I have to to tip my hat to Crescent Moon for doing a decent job of getting the game to run on older hardware. The controls area similar to other mobile shooters, in that they’re swipe based, with lefthand swiping used to control movement and right hand for directional viewing; think Dread Trigger’s control scheme, if you’ve used it. Three buttons show up in the lower right corner: one for firing your selected weapon, one for activating the power inherent to the class chosen, and one for jumping. The jump button also dodges when used in conjunction with swiping for movement. Weapons found in your inventory have the option to be “linked”, with the active one showing up in a set of brackets near the top of the screen. These linked weapons then can be “hot swapped” (for a given standard of hot swapping), by swiping the bracketed weapon in either horizontal direction to cycle through your linked weapons.

Characters are upgraded in a handful of ways. When a player levels up, they’re awarded a single point to spend in one of several areas like improving their special ability (more damage, longer time when invisible, etc), shortening the ensuing cool down time after using said ability, improving your character’s jumping, running, health regen, ammo efficiency, and the like. I have no idea if there’s a level cap, as I was able to finish the game in short order. There’s a complete lack of a minimap as well, so getting lost in a given section, or just losing your bearings, isn’t hard to do with the appearances in many places being so repetitive. The soundtrack was a bright spot for me, reminiscent of the instrumental stuff you’d hear in a movie. It was applied aptly in the spots where I noticed it, and definitely added to the mood of the moment.

On the whole, this game is flawed, to say nothing of the bugs. I played what I believe was an early version they released for reviews that has since been heavily patched up, though that only addresses part of my complaints. There is a promise from Crescent Moons that I received via email, to add more side missions to what’s already there, but that doesn’t help the brevity in the story missions, the shallow feel to how weapons are handled, low number of alien species, all of which leaves the game with a very “stripped down” feeling. I’m a big fan of a Crescent Moon’s stuff, but this one has left me unsatisfied. Without more content across the board, I can’t recommend this at their asking price of $7.