In KOTOR, players can choose one of three classes (soldier, scout, and scoundrel), each with differing capabilities (stealth, persuasion, demolitions, etc). Players can also customize the appearance of their character’s face, as well as gender and name. All choices are of the human species. The plot of the game, at least in the early going, is that player’s character is assigned to a space ship that’s attacked and boarded by the Sith. Players will assist in fending them off, yet still crash land on a nearby planet that’s under Sith control, and completely embargoed. Along with another survivor, you begin to search for a Jedi that also survived the crash. The story continues from there, but I was unable to tap into this game, as there’s a MASSIVE bug within it. More on this later. 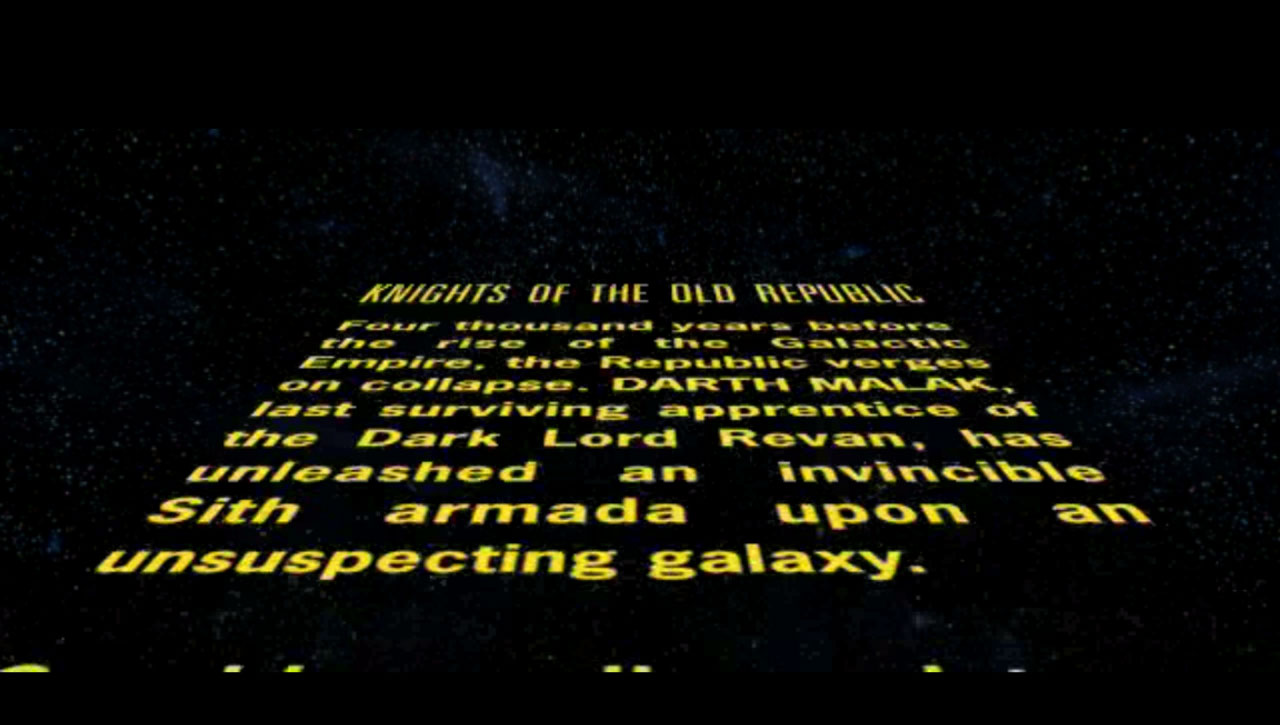 KOTOR is a classic role playing game. Combat is watched live, with players having indirect control over their characters, where battle can be paused to update or issue new orders, but executing the orders is up to the characters. So take firing a weapon, for example. Players can select that option from the popup menu that appears when an enemy is first sighted (and the game is paused). You would select the option fire your weapon, the un-pause the game and watch  your character fire away with reckless abandon, and see every shot either hit or miss. You can also issue other commands while the game is live, or by pausing, and see the character execute them in order, after completing the previous task. Medkits, grenades, stimulants for boosting your character in some way all work like this. Changing your characters load (shields, weapons and the like) are all done while the game is paused. This is a powerful way to conduct combat as it gives players a fine level of control, while at the same time removing them from the outcomes which are completely dependent on the stats of the characters, their gear, and any other modifiers.

This is closer to pure RPG than most games that borrow the level up- or tech-tree, and merge it with a shooter of sorts (no knock intended there, that hybrid style is a total blast to play as well). There are a handful of soft buttons, located in the periphery of the screen, that are important to maximizing your play in this game; with that in mind, players will really want to get this into a 7″ screen or larger, just to accommodate the volume of options: minimap, pause, game options, toggling between moving your crew or moving just the character you control at the moment, hot buttons to things like medpacks and boosters, and more. Mastering them can really streamline play as well. And the variety of gear and weapons is great. There are all sorts of melee and ranged weapons, with different purposes and capabilities. The same goes for armor, shielding, force powers, grenades, and the like. How you engage your enemies  will simply depend on taste, given the wide selection available to the user to take advantage of. And the choices extend beyond gear. Do you blast the door open, hack the lock, or forgo it altogether? Do you use your parts and spikes to fix the security robot to do your dirty work, or do you user them to overload the electrical system to zap your enemies instead?   Which classes do you bring along with you, as you’re only allowed two companions from your crew? 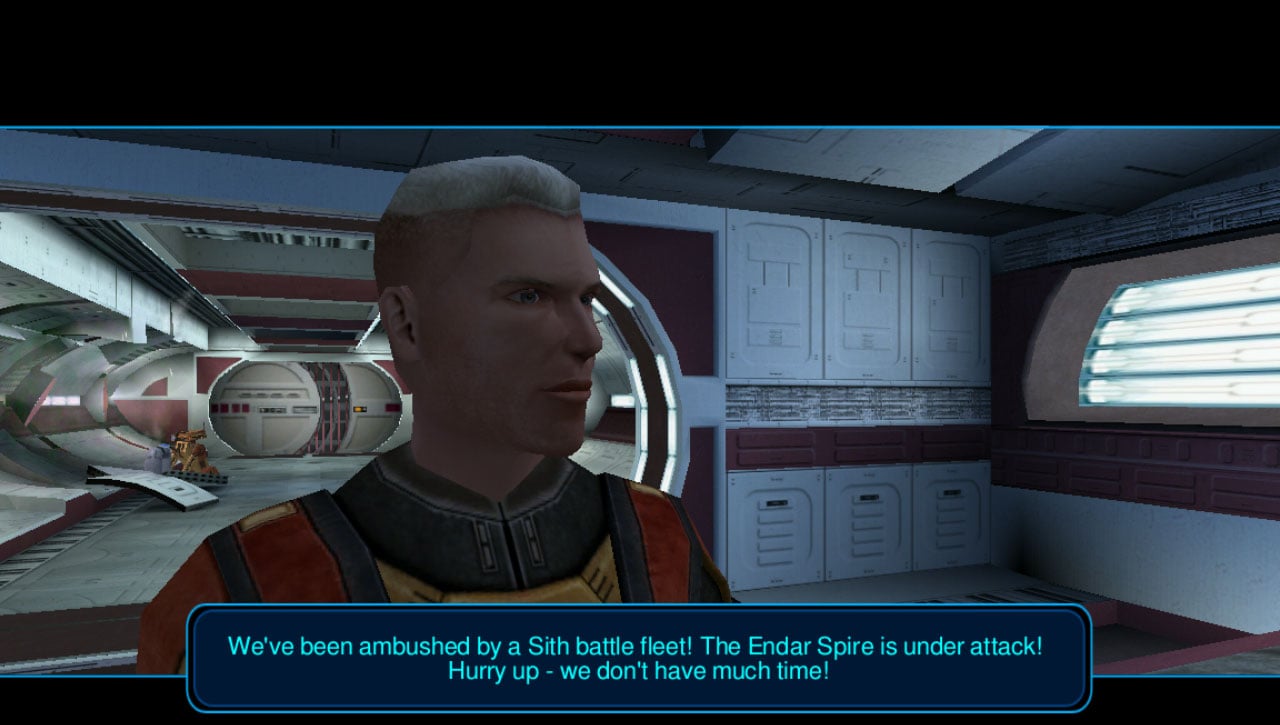 The graphics, per the game’s page on Google Play, were stripped down/streamlined to work on mobile devices. While not super HD, they looked just fine. My old 2012 Nexus 7 handled it fairly well, enough where it wasn’t prohibitive, though I’d wager things would be smoother and faster on newer hardware. Your mileage may vary. The soundtrack was a classic for the Star Wars series; enjoyable, with a symphonic approach. If you already dig Star Wars, you’ll enjoy the thematic approach to it, and other small details in the game, like the suggestion to kill subtitles for a more cinematic feel, or the fact that the intro for KOTOR is identical to the movies. The controls as are slightly different from what appears to be the growing norm, of one thumb controlling the viewpoint and the other controlling movement. This game lumps the two together, so you pan and move with one thumb sliding around.

And here is where we get to the bug that has caused me to abandon this game WELL before completing it. I hit a point, still early in the game mind you, where two off the characters in my party simply up and disappeared. On the screen showing all my characters, the respective squares for the two that disappeared were just black spaces with the text “I’m broken, so very broken”. I did a Google search for that text (Google Results Here) and found that this wasn’t anything new for this game. People were having this bug hit them over a decade ago, and on other platforms. Why would the devs that already put time into streamlining the graphics and controls not also take care of this issue while they were at it? It’s not like this wasn’t a known issue. For me, this is almost criminal with the level of indifference to your customer base. 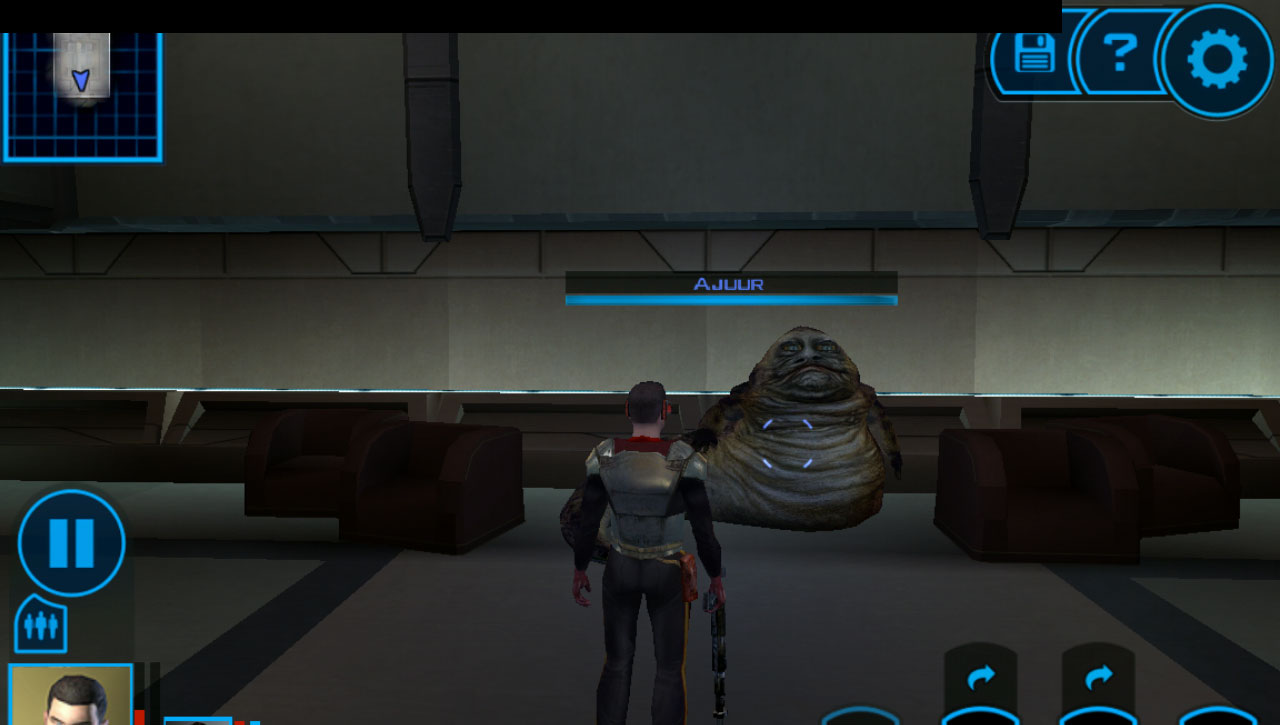 The work around to recover your self-deleting character(s) is to load a prior save file that hadn’t been corrupted, or alter the save file itself. Here’s the problem though: if you use the quick save button that’s already on the screen, it over writes the previous file, so you can’t go back to something earlier. For you to ensure you can go back to something uncorrupted, you have to enter the menu and create a new save file EVERY TME, and *completely* forgo the quick save altogether, obviating it’s purpose in doing so. All I can do about this, is shake my head and warn others to be careful or stay away. This game launched with a sale price of five dollars, and the promise to double shortly thereafter. I can’t justify paying five for a game with a glitch that bad, let alone a ten spot. That’s robbery, plain and simple.