The setting for Star Realms is your fairly straight forward outer space combat, with the goal being to deplete the health of your opponent. Within the game, there are four different factions vying for supremacy: Blobs (aliens), Trade Federation, Star Empire, and Machine Cult, each representing human factions with all four having a different focus within the game, and all having their use. For example, the Trade Federation’s focus is on restoring health (which in this game is called Authority), resources, and the like. The Star empire focuses on Combat (read:dealing damage to the opponent’s health) and forcing your opponent to discard cards from his/her hand, etc. Often times, the cards will have an ability they can use, and a second ability (or enhancement of the first) that players can access if there is a second card they have in play of the same faction. For example, I may have a ship from the Star Empire that can deal two damage. If I have another Star Empire card in play (ship, outpost, etc), the damage dealt becomes four instead of two. 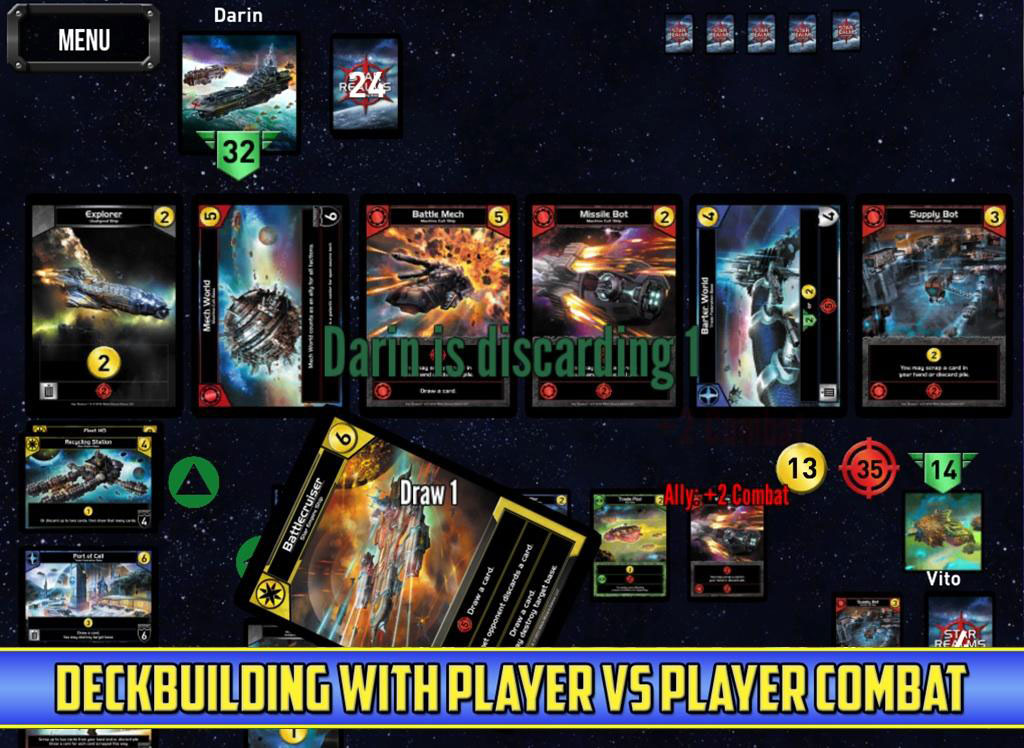 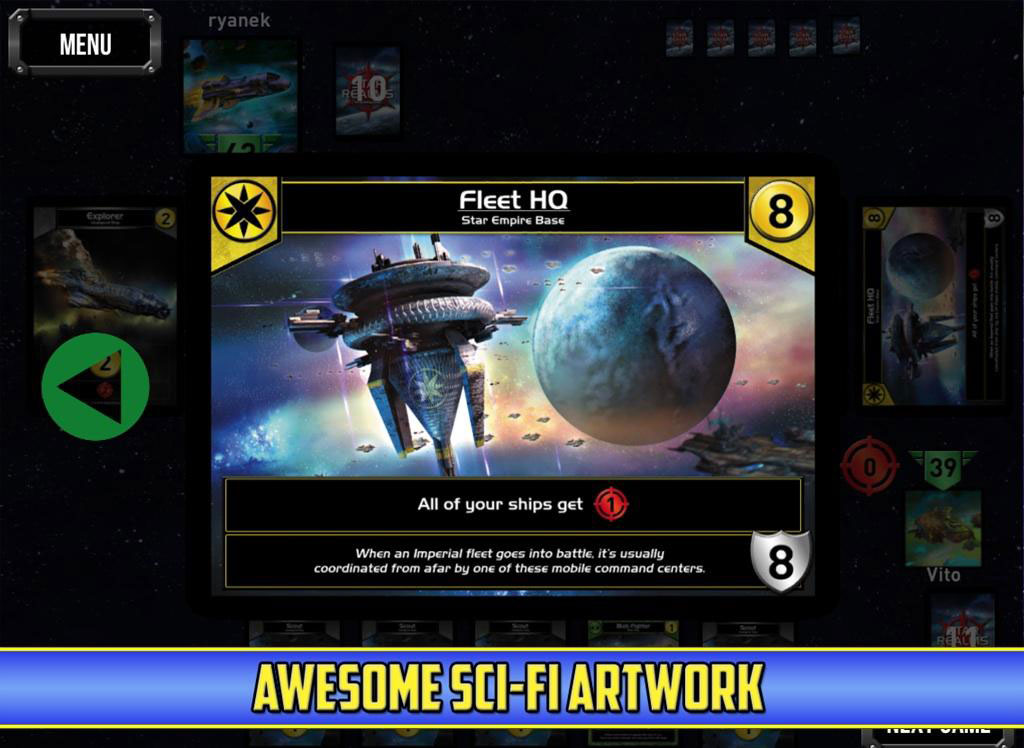 In a standard game (as opposed to some of the single player missions), each of two sides start with the same number of authority (say fifty), and the winner is the one that depletes the authority of the other down to zero; the physical card game supports as many as six players, typically with the same win condition. The layout is simple, reflecting what would be the set up for the physical cards, with the only real difference that I could ascertain was that a player’s authority is simply a counter off to the side, vs cards dedicated to that end. The background and soundtrack are both simple, with the former being a starry night, and the latter being an instrumental tune that my wife mistook for the theme to the old TV series the X-Files. While I wouldn’t mistake one for the other, it’s as close a description as I’m going to find. And, being a card game, players see the decks get shuffled, graphics of simple explosions when they take damage, and the cards move from place to place around the (lack of) board. When cards can be interacted with (say, a card can be purchased or targeted to be discarded), the game highlights that card with with a colorful bracket, and will also prompt players when there are options left for players to take. This simple, stripped down approach allows the cards to be the focus, very close to what one would see were the game being played with physical cards (sans the explosions). 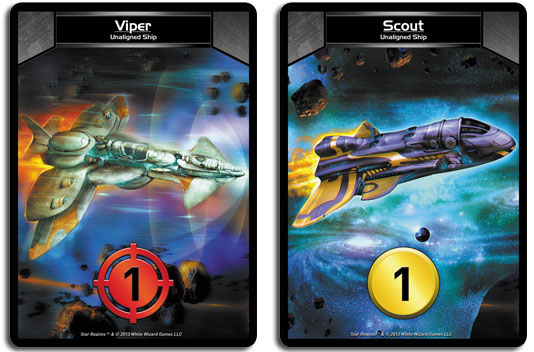 The gameplay isn’t very complicated, once you get the hang of it. Unlike many other card based games, this isn’t one where players collect vast amounts of cards and build the decks that they intend to pit against the decks of others. In Star Realms, there is one deck that contains the entire game, and everyone shares it. Each player begins the game with the same ten cards, eight ships that provide trade (the currency for acquiring better cards) at one each, and a pair of ships that can do one damage each. This deck is shuffled, and the player begins with five of those being dealt into a hand. In the middle of the play area and between the two players, there is a row of cards “for sale”, with cards of varying cost and ability displayed there, (a la Texas Hold em) that any player can use during his/her turn to acquire more cards. Players then count and may spend, trade, attack, use abilities of ships or star bases, in any order they see fit. The entire hand is discarded at the end of their turn, with five more cards dealt fresh in their hand thereafter, from the draw deck. When your draw deck runs out, your discard pile is shuffled and reused to draw from.

Every round, players have the chance to acquire newer cards. These newer cards are immediately placed in the discard pile upon acquisition, to be shuffled into the draw deck upon its exhaustion. I mention this as it adds a layer of strategy into the game. Acquiring a card doesn’t net immediate benefits, but players are forced to wait for it to be shuffled into their deck with the hopes of drawing it relatively quickly. This requires players to think ahead about which cards they’re going to add into their decks for later use. With many of them being enhanced when there’s a second card in play of the same faction, players need to be choosy about how they build their deck as the game goes along. Stacking it chock full of one faction is great for whatever benefits that the faction in question provides, but you’re then cut off from the other features inherent to the other factions. On the other hand, mixing in the factions too much can cost you the bonus abilities as you reduce the frequency of drawing cards of the same faction. 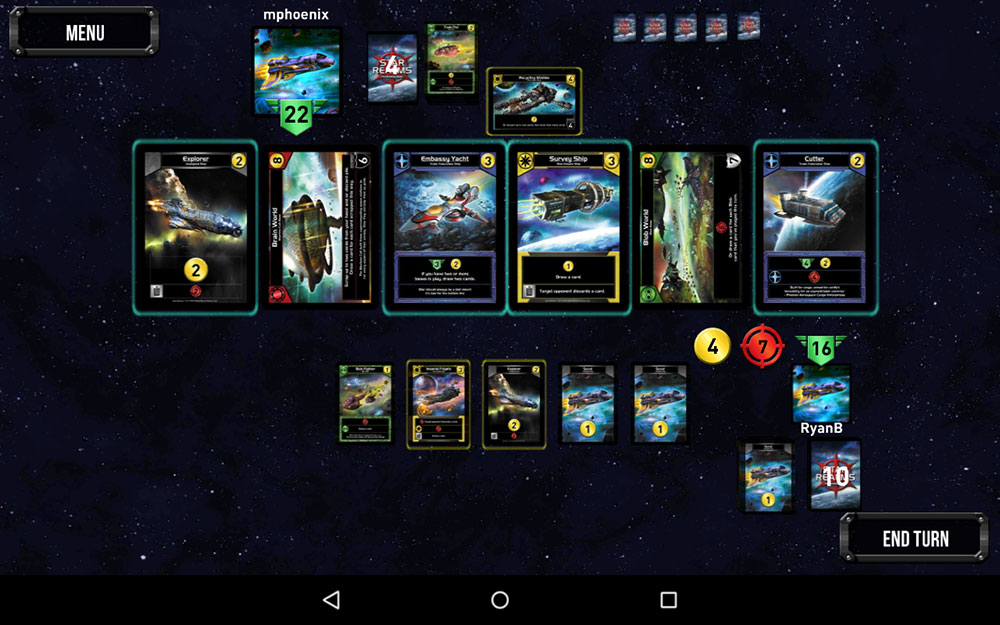 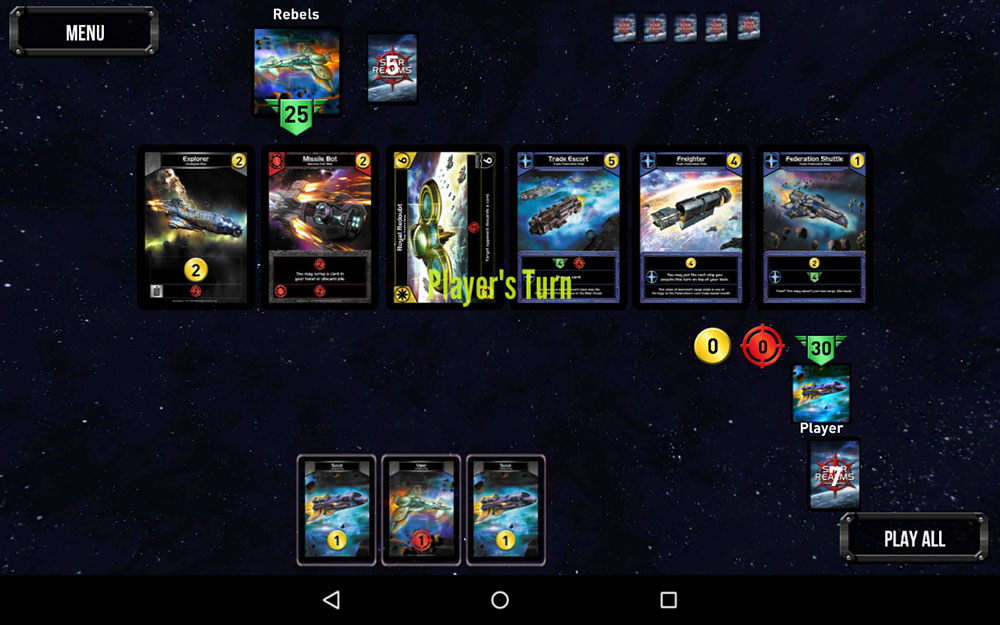 Star Realms has a few different modes. There is a tutorial that assists in getting players to learn the ropes. There’s a couple of single player options. First, there’s several missions that contain the story for the game, where players assume the role of the emperor’s heir and command a small squadron of ships. Given that the focus is on the cards, story isn’t developed much at all beyond some slight backdrop for a given mission, though on a few of those the rules get tweaked to add a unique spin and help avoid the “rinse and repeat” feeling that I felt a few times. And that’s the trade off. Once you get the hang of the rules, the game is elegantly simple (so beginners to CCGs can jump right in), but that simplicity can lead to a repetitive feel at times. Second, there’s a second mode for single play called “Vs AI”, which one would liken to a skirmish or quick play mode. No back story (or what passes for one in this game), the battle begins immediately.

There is also multiplayer options, both online (asynchronously) and pass and play. With online play, you can be paired with someone at random or players can look up the screen name of a friend. Sadly though, there is no integration with Google Play Games. Each game that I played went fairly quickly, running twenty or thirty minutes each. On the whole, the game is simple and fun, though it can be a bit repetitive at points. Its available for free on Google Play, netting you the first six story missions, and vs play against the AI, while the In-App Purchase (upwards of $4.99) nets players a second series of story missions (nine of them, in this case), pass and play, online multiplayer, and levels of difficulty when playing against the AI. So if you like CCGs, or wanted to learn one, it’s hard not to recommend Star Realms given that it can be sampled for free.