Spacetime Studios recently made news with the announcement that the company would be dropping development of some of their titles in their catalog of games. While these games will be remaining active, they just won’t be receiving updates with new content. In the original announcement regarding all of this, Spacetime Studios hinted at a new game that is on the horizon and today we finally get to talk about it. This new game is named Call of Champions and it is a MOBA but it isn’t your typical MOBA type of game.

Call of Champions is the new game that Spacetime Studios hinted at back in January of this year when they made their announcement regarding their other games. Back when Pocket Legends was released, Spacetime Studios basically changed the horizon of what a MMORPG for mobile is and that style has been emulated by other companies since then. With Call of Champions, the company is trying to do this again but with the MOBA genre. 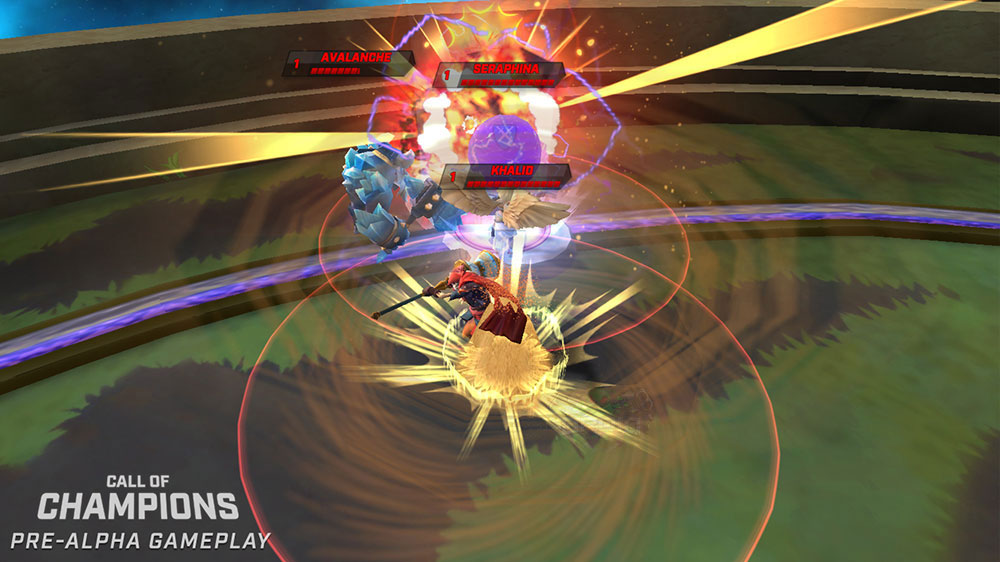 Essentially Spacetime Studios disassembled what makes up a MOBA game and rebuilt it from the ground up to better fit mobile devices and the style of gameplay that mobile gamers have instead of just making a typical MOBA style game. With that said, there are some format changes in Call of Champions that set it apart from other MOBA titles.

First, matches are designed with a 5 minute time limit. This was done for a few reasons but the big one is to provide a very intense gaming session. You may be wondering how it is possible to have a good MOBA game with matches that are only 5 minutes. The answer to this comes in the form of how the combat actually happens in this game. Call of Champions features an almost brawler-style of combat, complete with combos and other things you would find in a Street Fighter or Mortal Kombat type of game. Teams are also 3v3 instead of 5v5.

The goal, or how you win a match, is by ‘pushing’ an orb, called the Orb of Death, into the enemy teams base. To push this orb, all you need to do is have members of your team near it and it will go in the direction of your opposing team’s base. Of course there are other ways to win should no teams manage to destroy the other’s base. 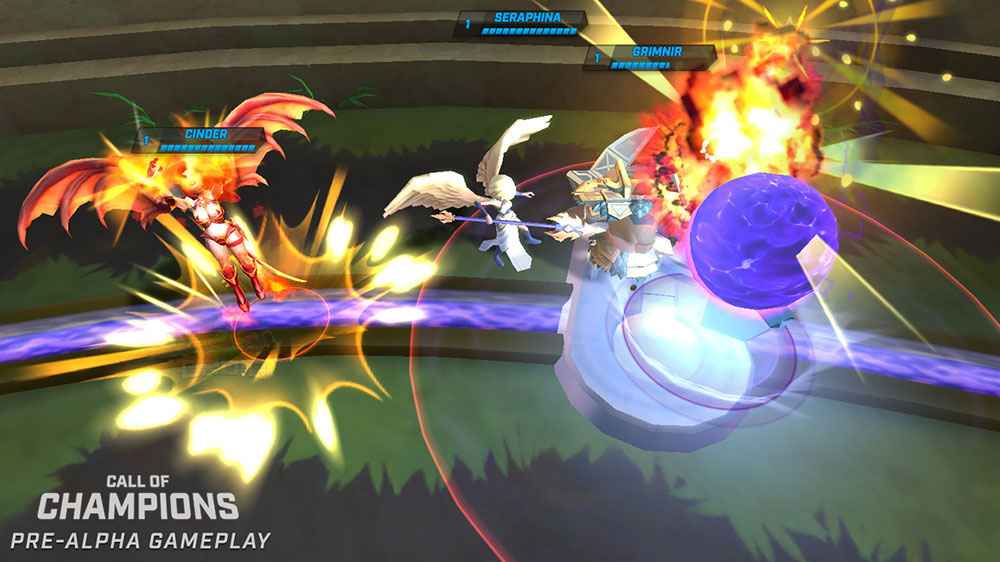 In total there will be 20 different heroes to choose from at launch but Spacetime Studios plans to have upwards of 40 in total. Each hero will have their own stats, unique abilities, and even back stories as well. There will be five distinct classes that these characters can fall under, each representing different style of play. For example one character could be a warrior which is more of a tanking style of class. Here is where another interesting feature comes into play with Call of Champions. Character customization happens outside of the match. So when you start a match, all your abilities are already unlocked so instead of having to level up during a match, picking skills to upgrade during a match, and buying upgrades and items during a match, all of this is done in between matches. A player’s hero gains XP and gold, which varies depending on if you win or lose a match and how well you did, and can use that to upgrade/customize their hero after a match.

If you are worried that there won’t be enough customization available for your particular hero, fear not! There will be 10 tiers of possible customization and ability upgrades available. So there will be a lot of flexibility in how you basically design your character as he/she levels up after matches. 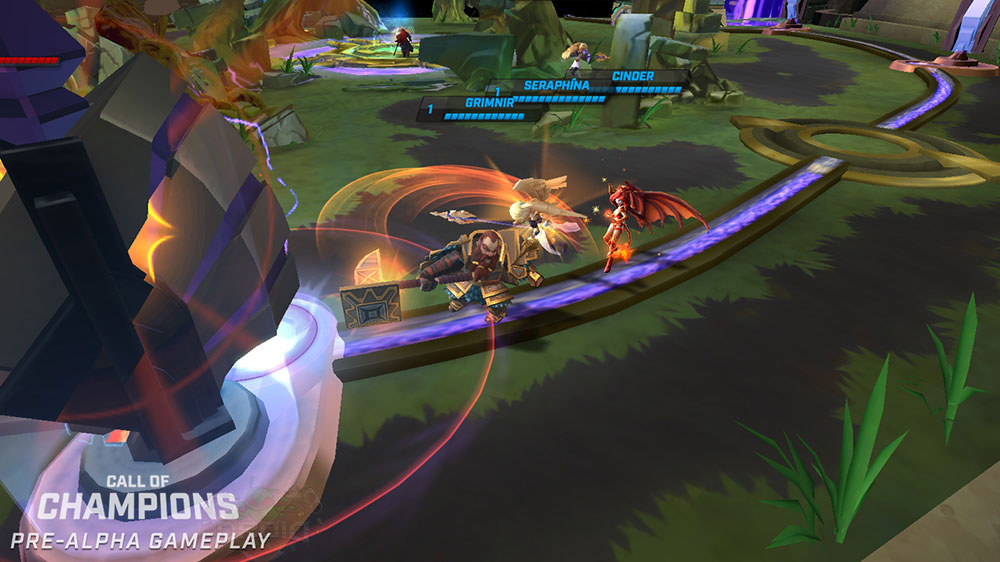 The maps in Call of Champions will consist of a 2 lane design (top and bottom lane) with a center area. The center area can vary depending on the map but for the initial map that will be coming with the game, the center area is a maze where power-ups can be found. Team bases are at the ends of each map. The reason for the design is also in regards to intense gameplay sessions. Gary Gattis and Cinco both described this game as sort of like the last 10 minutes of an intense and close basketball games, which is usually the most exciting part of the entire match. This is what Call of Champions is trying to provide but in a MOBA setting.

Maps will also have no minion spawning. It is all about player on player combat. However there will be other defensive features for teams to utilize such as towers, beacons/traps, and so on. Teams will need to use strategy to take these down while dealing with their opposing team trying to beat the crap out of them. 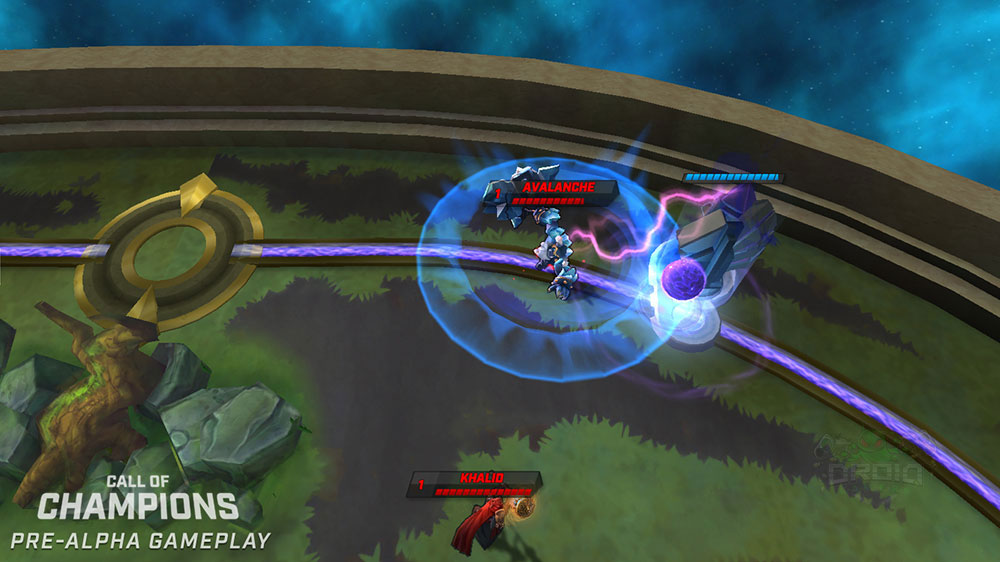 MOBA games are basically the backbone of eSports right now. While many different types of games exist in eSports, MOBAs are the most popular right now. While Call of Champions isn’t being built as an eSports game, there are plenty of features that will be coming with the game that essentially make this perfect for eSports. There is a full spectator mode available where anyone can watch matches as they are being played. So commentators can spectate a match that is going on in real-time and there are even tools available such as rewind, slow motion, and x4 speed up that can be used for play analysis.

All of this, as well as matches, can be broadcasted onto TwitchTV since that is also built right into the game. So even though the game isn’t being built specifically for eSports, all of the features are there for this game to be an eSports title. 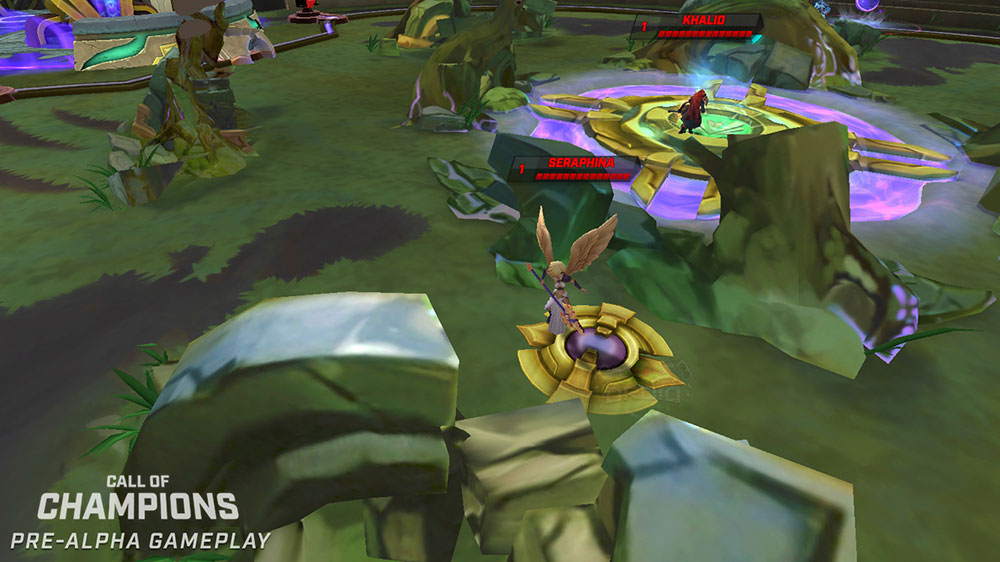 So when will we see Call of Champions land on Android? Right now the game is in a pre-Alpha build. Spacetime Studios is looking to have a beta going shortly (which we will report on when/if it is a public beta), and from there the company would like to have the game out and in your hands by the end of Q2 2015. That is, of course, if everything goes smoothly. As for pricing, this is a MOBA so downloading and playing the game will be free and our guess is that there will be optional IAPs available, most likely for certain heroes or alternate looks of existing heroes.

We will be going hands-on with Call of Champions at GDC 2015 next week so expect more coverage to come. If there is anything you want us to check out specifically regarding Call of Champions, let us know in the comments below. Thanks to Gary Gattis and Cinco Barnes for sitting down and talking with us.