Turbo Wheels from Chundos Studios is Now Available to Download

Chundos Studios is an independent game developer. They have a few titles that they have already released for Android. Their in-game art is always unique and colorful. One of their more successful games is Beat the Beast, which is a hybrid action/strategy/tower defense game. What made it unusual at the time, were the well-designed creatures, the environment, and the 360 degree rotation of the game world. Today, Chundos Studios has released Turbo Wheels for Android.

Upon first glance at Turbo Wheels, you may be reminded of another successful racing title that you may have played, called Mini Motor Racing. Mini Motor Racing was created by The Binary Mill. Like Mini Motor Racing, in Turbo Wheels, you are racing miniature sports cars. Chundos Studios has deftly created a beautiful game world, with tracks that burst with color and character. With my brief time with the game, Turbo Wheels proves to be a fun, but challenging little racer.  I would like more options with the controls for the game. Primarily you are given a left and right arrow for turning, and one button for a boost. No brakes needed in this game. 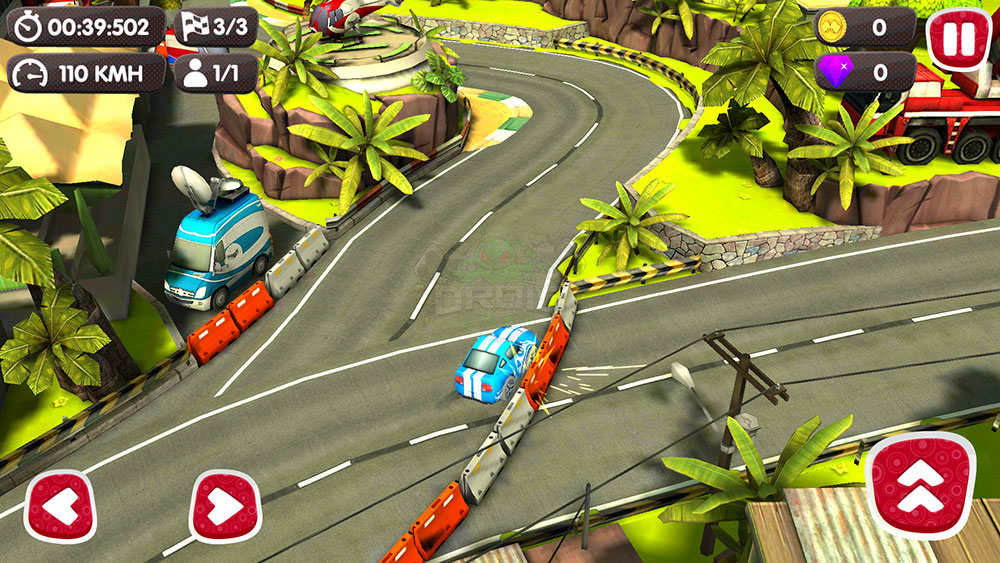 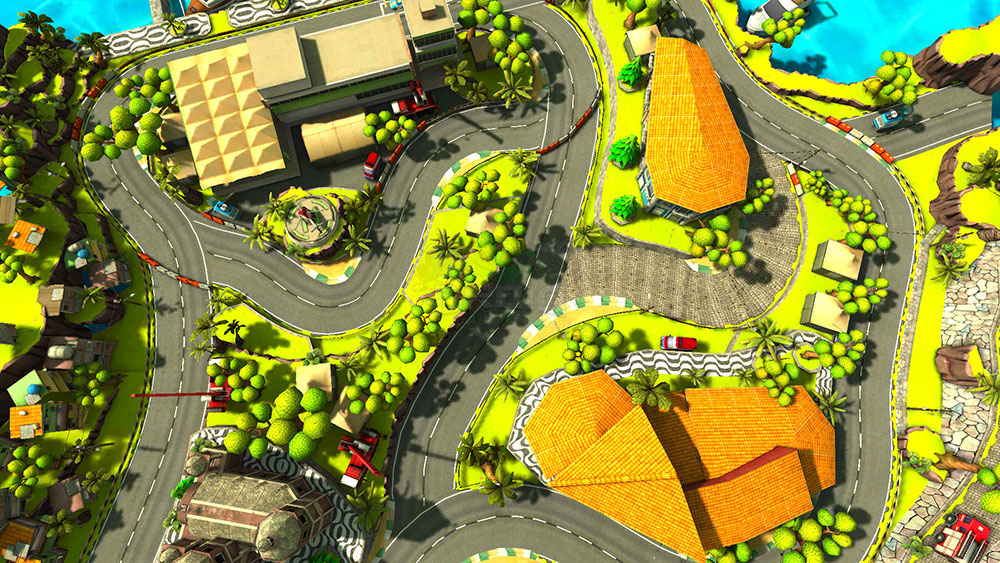 With racing games for me, most of the success or failure of them, depend on the flexibility of the controls. Hopefully more control options will be added to the game. I think they need them. The controls were not as responsive as they could be either. I felt like I was pressing to hard on the screen to make my vehicles turn. You need better controls for all of the loopy and creative tracks they have put in the game.

“In tribute to our first and most successful racing game Chundos+Turbo, we present our next title Turbo Wheels. Get ready for the most exciting and beautiful racing game that exists until now. 25 unique mini cars in five different categories (Sport, SS, GT, Formula & Classic), 4 countries with over 16 tracks, different race modes and much more.” – Chundos Studios

What I have liked about Turbo Wheels thus far is the creativity that has been put into the game, and its different environments. As with any racing game, you have upgrades for nitro, stability, top speed and acceleration. You can race against the AI, try and beat the clock by avoiding obstacles, go one on one, or race for coins.

The game does employ iRDS (Intelligent Race Driver System), which is an asset from Unity-3D for AI Systems/Car Physics. I felt like racing against the AI was fair. The in game music adds a nice touch. All of the components are there to make a fun racing game. As I mentioned before the in-game environments that have been created makes me wish there were a Sunday Drive mode, just so you can take in all of the environment at your leisure. 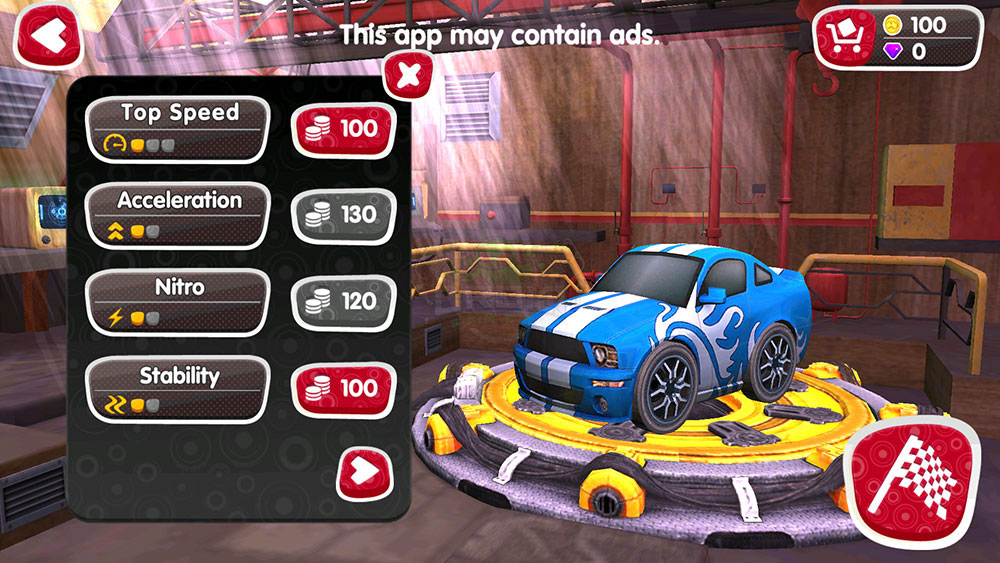 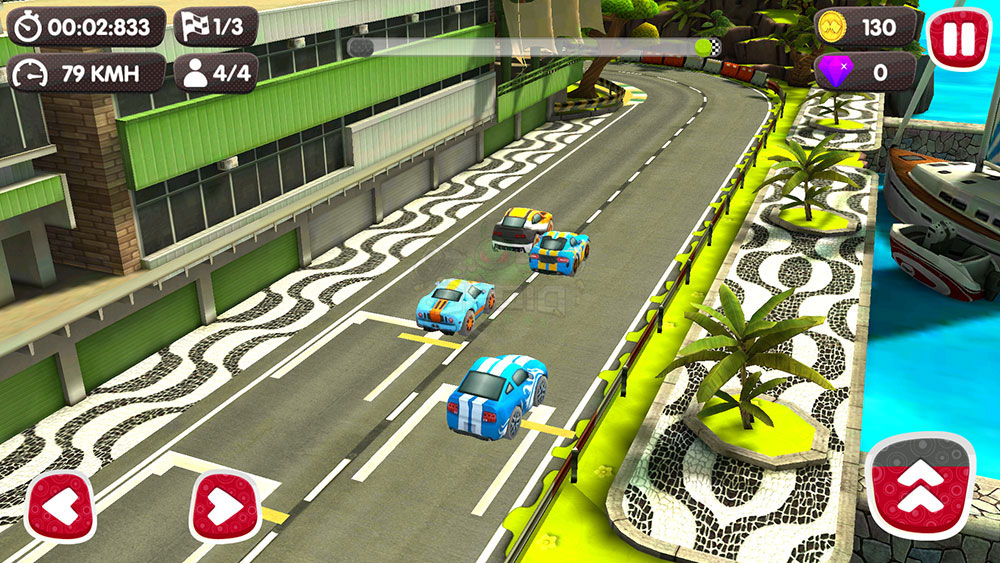 We will spend more time with Turbo Wheels and give it a proper review in a Weekend Play Game Review. Thus far the game is fun, but hampered a bit by the controls. The game is free to play. There isn’t the usual energy/stamina bar in the game. You progress by winning, which is the way it should be. If you come in first or second place, the next track or game type is unlocked. Based on where you place in the races, you will obtain coins and gems. Upgrades are done through coins and unlocking cars is completed with gems. There is a fair amount of depth to this game, as there sixteen tracks to race on, among four different countries.

If you enjoy racing mini cars in a bright and colorful world, Turbo Wheels is available to download for free in the Google Play Store with optional IAPs. Give it a spin. What could it hurt?