Reliance Games has announced today the addition for another robot fighting game in the Real Steel franchise, this time it’s called Real Steel Champions. This new game will be a team effort between Reliance Games and Dreamworks SKG and will feature something that should have been in the first Real Steel game – the ability to build your robots before fighting with them.

Real Steel Champions will finally allow players to build their robot before they head off into battle with them. According to Reliance Games, there will be an almost unlimited amount of combinations of parts that you can use to build your robot. This includes exclusive and legendary robot parts, including fan favorites Atom, Zeus, Noisy Boy, Midas and Metro. Parts include different heads, torsos, arms and legs to name a few. 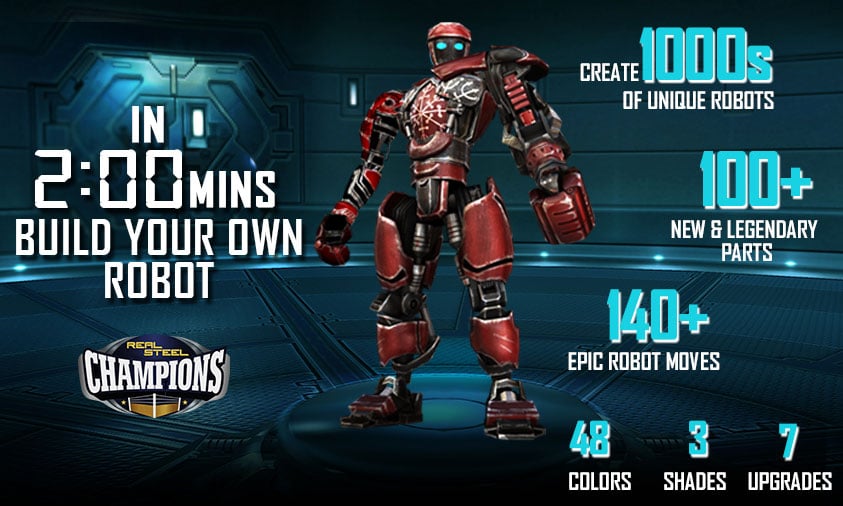 Once you’ve figured out how you want your robot to look, what parts you want to use, and finished building your robot, you’re off to fight. There are 10 new arenas that will be coming with this game when it launches. There will also be heavy and special attacks, ultimate upgrades, critical hits and finishers to use against your opponents. There will also be a new Tournament mode to play through which will have to go through 20 fights with four different bosses. Other content features include 30 challenges, 90 Time Attack fights and the ability to practice all your moves in the unlimited Free Sparing mode.

Real Steel Champions will be coming to Android next month. There’s no specific release date announce though as well as no pricing information either. When this game does arrive, we will post an update. In the meantime, you can check out the game’s new trailer in the video below.