One of the facets of the game that is missing is the single player campaign. While this may not be the strong suit of the genre as a whole, there’s something to be said for having a variety of objectives that are to be achieved with a mix of terrains, to say nothing of an actual story, or any kind of multiplayer. In the developer’s defense, I was told that the lack of solo campaigns was a conscious decision, to expedite the release of their game, which he’d spent two or more years on. This means that there are only skirmishes available, though plunking down for the IAP does unlock several different modifiers for how the rules for a given skirmish will impact game play, and that there’s no real context or backdrop to the gameplay. Players simply jump in and play. 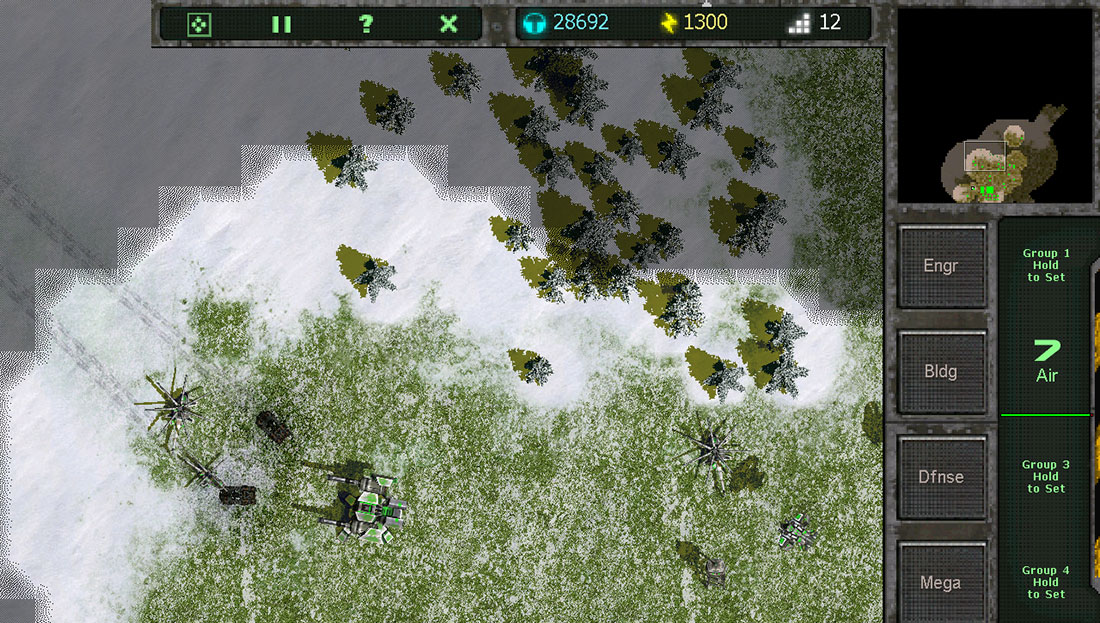 The only real distinctions between factions are their assigned color and nation. So in my experience, players are typically assigned “USA” and the color green, and face off against one or more AI that could be colored yellow, red, blue, etc, and would be given one of several nations such as Germany, Russia, China, England, and so on. Outside of those arbitrary distinctions, there doesn’t seem to be any other difference. Each side involved have access to identical tech trees, with identical units that all look alike, save for their assigned trim color. So in short, while there’s a decent spread of options for units, they’re all identical from one faction to another. What is most challenging about this, is that I can’t help but feel like “been there, done that” once I finish a skirmish. There’s no story for me to progress though, so repeatedly setting up new ones got a bit old for me. Your mileage may vary.

There are also several visual bugs that I noticed in LASW. Nothing that will cause it to crash, or delete save files or anything, but visual cues that are just…off. Take the unit and terrain shadows for an example.At times, they’re superimposed over the object that creates the shadow (or other objects, unrelated), instead of being below the object. At other times, it shows clear through terrain. So when I have choppers flying over snow covered grasslands, or just trees standing there, the shadow is the color of the yellow-greenish grass, instead of darker looking snow. Yet at other times, they appear as normal. So I’m not sure if the shadows are ALWAYS off on the trees, or if it’s the terrain (snow in this case). It’s just hit or miss. At one point, I also noticed that the AI was building water-only units on land. In LASW, there are topography-specific structures, such as turrets built only on land, and torpedo launchers that float only in water. In more than one instance, I saw floating tidal generators built on land by the AI. It’s little things like this, that really detract from the overall experience.

Regarding the game play itself, there are some things that the game gets right. For example, there’s an action bar along the top of the screen, for opening a text-only tutorial, pausing, and zooming out to view the map on the larger screen (as opposed to the mini-map in the top right). There’s also a second action bar along the right-hand side. When you click on a unit for example, you can choose which orders  that you’d like it follow (the default order is movement if you tap on a location, and attack if you tap on an enemy unit or building. So if you want to have a unit patrol, you would select the unit(s), tap on orders, and choose patrol (or something else) from the list. The bar on the right is also where you find your buildings which include resource production/storage, defense, labs, factories, etc. The game includes over 100 types of units, so there’s a variety to choose from. There are amphibious tanks, choppers, planes, subs, battleships, repair bots, turrets, artificial barriers, and nuclear missiles, just to name a few. 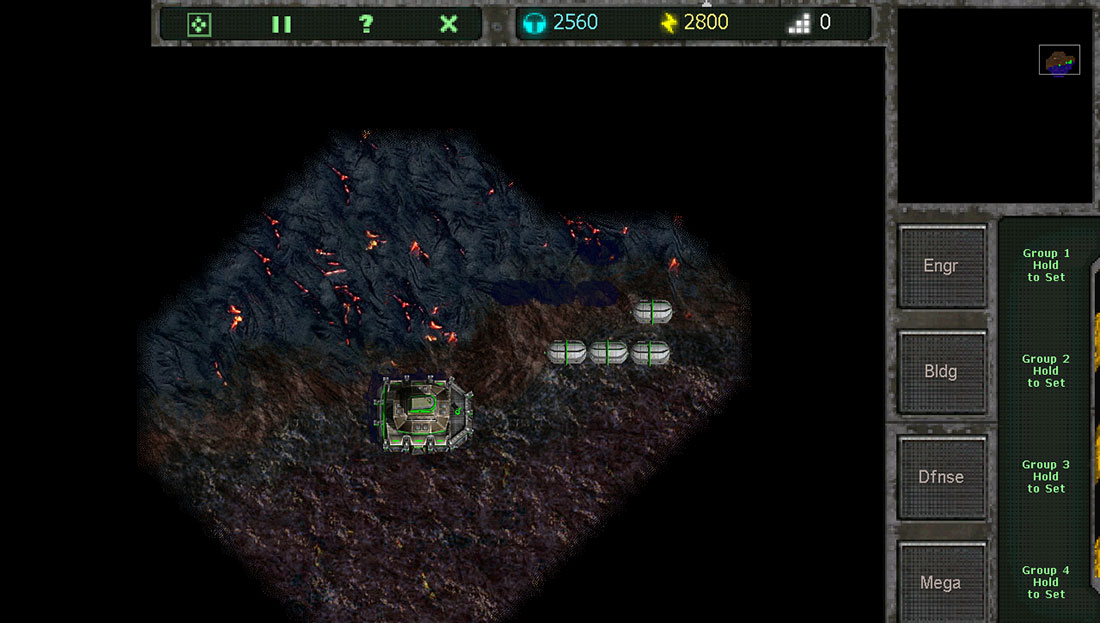 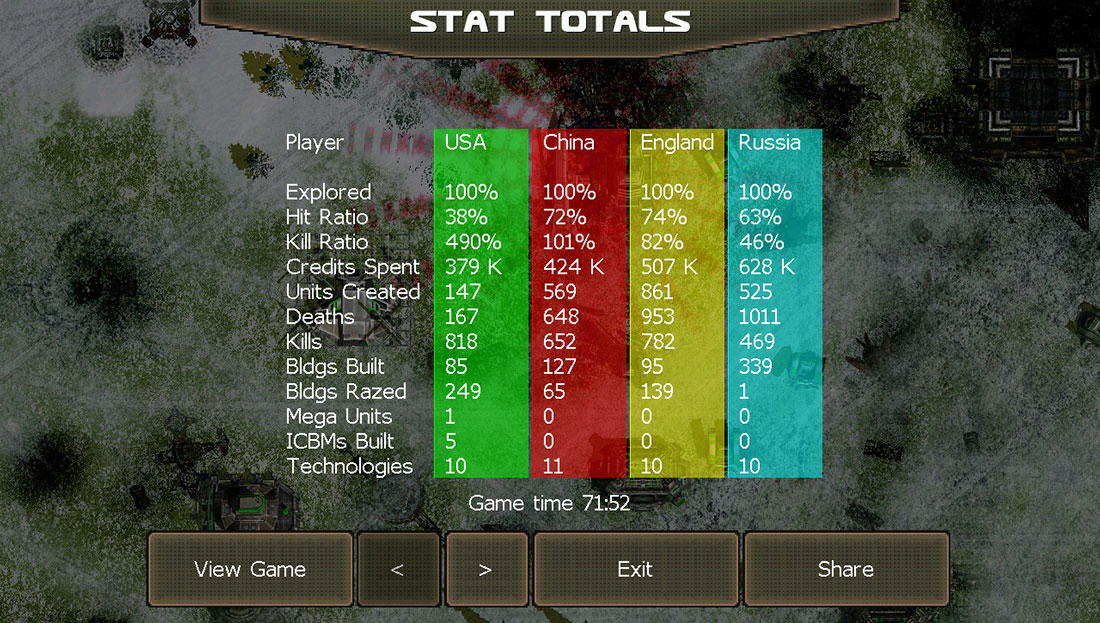 LASW also has deposits of exotic minerals that are randomly placed throughout the theater of war, so once a player builds a special mine on top of them, it unlocks the ability to build certain super-units that are massively powerful, and come at an exorbitant cost. There is more than one type of exotic mineral, and I typically saw two or three in a given match. Each type of mineral correlates to a different set of super-units. Overall, it’s a really nice feature, being forced to fight over rare minerals in order to build military behemoths. There are human voices that acknowledge when they’ve been selected or ordered around, though they get a bit repetitive after a while. Grouping them is fairly easy as well. Players can double tap on them to select all of the same kind on the screen, or use a pinch-zoom gesture to expand a box to encompass a given group on the screen. The groups can be assigned to hot keys (located on the right side) for quick use later, with single tapping to highlight and give orders to, or double tapping the hot key to move the screen over to where that group of units is.

There are also some default hot keys, one for each type of land, sea, air. sub, etc. This is nice when you’re in a real bind, or looking to move everything you have to a particular point in the battle. Getting blindsided? Just tap on the hot key for all of your air units, and give them something to blow up, and just pray they arrive in time. Given the restrictions of playing RTS on a mobile device (no keyboard for quick orders or easy grouping, no mouse for quick and precise clicking), these “panic buttons” are a very nice feature. There is also a variety in terrain, ranging from oceanic, to tundra, volcanic, forest, grassy plains, and more. In the unlocked version, players can customize how many AI they’d like to face, if they are on teams or a free-for-all, what the victory conditions are, and more. Players can make it a space race (first to launch a nuke), or rule out nukes altogether. Having this much variability does take some of the sting out of a skirmish-only game, but that goes only so far. 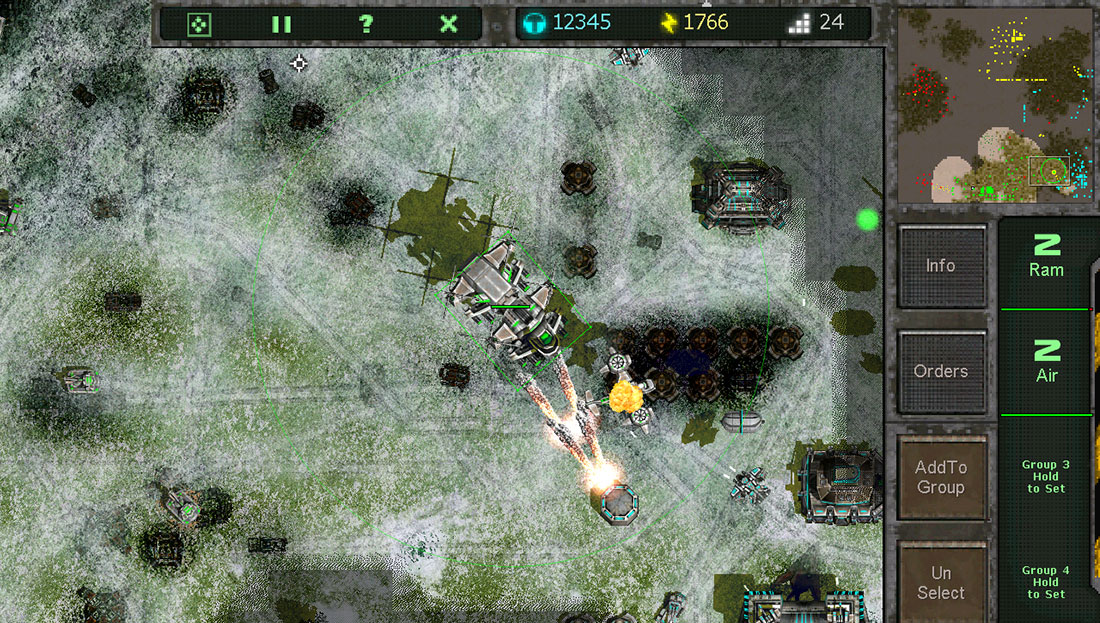 There are a few other points worth mentioning. The soundtrack is great, if you like music that’s more energetic. It’s a mix of industrial/rock/electronica that fits the combat well. The game has several save slots, but never any indication as to which ones are occupied, which aren’t, nor which ones was last used. There is a resume button though, that will lead your most recent save, and it will last until you finish/surrender the skirmish in question. If you go long enough without playing to forget which games were in which slots, you’ll end up guessing if loading the most recent save via the resume button isn’t the file you want.  At the end of the day though, this game just feels incomplete.

As I stated at the outset, I really enjoy this genre of games, so I continue to hold out hope that it will finally arrive on mobile; maybe it already has and I’m barking up the wrong tree. But like the handful of other RTS games that I’ve tried on mobile, this game simply doesn’t deliver (though it’s the closest of what I’ve played). In this case, it simply lacks polish in glaring ways, as well as a standalone campaign. It’s heading in the right direction though, with the hotkeys that move entire sets of units and the like, so try it out for free. At its current state though, I’d pass on the $4.99 IAP at this point. With all the visual miscues, it’s difficult to justify the cost. If you enjoy RTS though, I think this will be one to watch as it has potential to be much better than it currently is.