As you can probably tell from the current trend of articles posted on our site today, there is a lot going on for April Fools Day, all of it being funny. Wargaming.net is doing their own thing for April Fools Day but you may be asking yourself “Why didn’t they add this to their April Fools Day list like almost everything else?” The answer is because even though this is an April Fools Day joke, it is also real.

If you are in the current World of Tanks Generals beta, and you log in today, you will receive the very special and very limited edition Soviet Air Force’s Antonov A-40 flying tank card. Not only will you actually receive this card, the tank’s special ability will only be useable during this April Fools Day event. After that, you will be able to keep the card no matter what phase of the beta World of Tanks Generals moves to as well as keeping the card when the game launches. Even though accounts are wiped during a closed beta for any game, you will still keep this card. That makes it an ultra rare card as today will be the only day to get it. 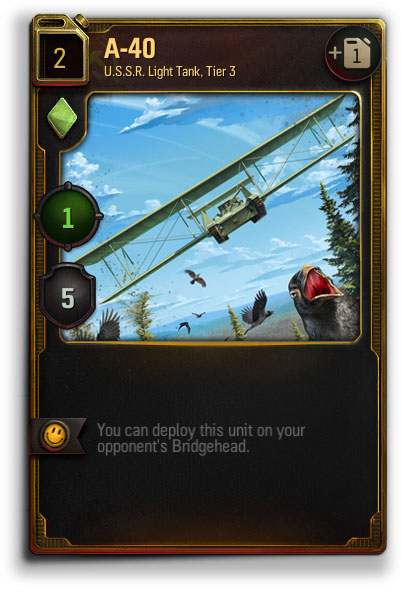 The special ability of this card is pretty interesting and can cause a lot of havoc as well. The Soviet Air Force’s Antonov A-40 flying tank’s special ability allows the card to play deployed on your opponent’s Bridgehead. This can make for all sorts of fun. However, as mentioned above, this ability will only be useable during the April Fools Day event. After that you will be able to keep the card, play it as a normal light tank, but the special ability won’t be useable.

So, if you want to have this uber rare card in your collection, even after the server wipes when the closed beta ends, you need to log into your World of Tanks General account today.