Wadjet Eye Games’ Technobabylon will be released onto Android in the future. Come meet the characters.

Wadjet Eye Games, the makers of The Shivah, Gemini Rue, and the Blackwell Series, are about to release another game, in their classic pixelated style. Called Technobabylon, this game is set in a city that’s located in a dystopian Sci-Fi setting, where an Artificial Intelligence runs the city and the local law enforcement are “all seeing” and “keep tabs on everyone”.

Throw in murder and a Blade Runner feel to the appearance, and you’re getting an idea of what’s coming. There are three protagonists in this game, and Wadget Eye has released a teaser trailer, and case study, for each of them. 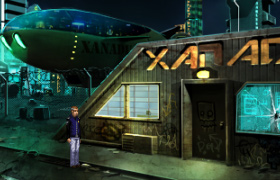 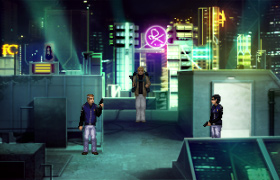 Dr Charles Regis – an agent of the city’s all-seeing secret police, finds himself blackmailed with the lives of his unborn children. Pushed to the limits by his deceit and his past, how far is he willing to go to save his legacy?

Latha Sesame –  a jobless agoraphobe addicted to the Trance, has become targeted for assassination. Without knowing who to trust, she must face the dangers of “meatspace” and survive a fate that has invisibly ruled her entire life.

Max Lao – a tech-savvy case officer who joined CEL to forget her criminal past. Now she finds herself torn between two loyalties. When she’s asked to apprehend her best friend and partner, she must choose to follow her friend or the law.

Personally, I’m a big fan of their games, so I’m looking forward to this release. They’re slating it for Spring of this year on PC, with only adding sound and music, and stomping out bugs left on the to-do list. The Android version will be arriving in the future but there is no set time frame for it right now. If past pricing is any indicator, it’ll fall between $1.99 and $4.99.