The Visual Forge is a talented group of graphic artists that have been working in the gaming industry for some time. They primarily have been working in the Browser and Mobile video game industry. They help other game designers bring their games to the next level by lending their talent. They also create games, and Ninja Shuriken, is now available to download in the Google Play Store.

As a kid, I can remember collecting Shuriken or throwing stars. The only downside to it, was there wasn’t much use for them outside of collecting. They were far too dangerous to be throwing around. Some other kid could get hurt. Now, The Visual Forge has made it easy for everyone that has a fascination with collecting shuriken, and given them an opportunity to throw them, without harming anyone else. Ninja Shuriken will challenge your ability to hit moving targets.

Weekend Play Game Reviews gives DroidGamers an opportunity to highlight some games that may have been overlooked in a busy week of game releases. Some of the games may have been released a couple of weeks ago, or longer, but they still merit reviewing, so you can have an opportunity to catch up on some good gaming during your weekend. 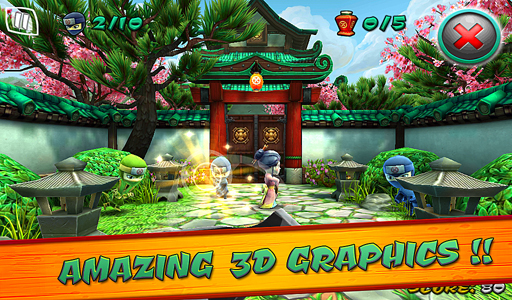 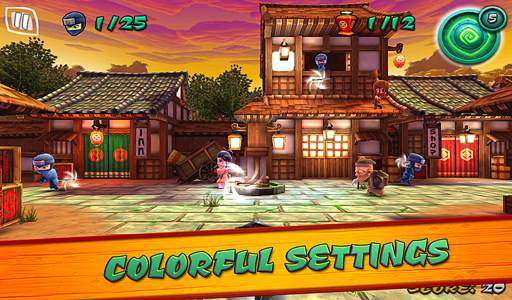 The game starts off pretty easily, but ramps up in difficulty quickly. Pretty soon Ninja will be flipping off ledges, and tossing stars right at you, while you are trying to block them with your shuriken. It doesn’t help that there are multiple innocent people walking around oblivious to your dangerous plight.

“As a successor of the Ninja Master, your duty is to defeat all evil ninjas and protect innocent villagers. Explore beautiful and finely crafted oriental locations, earn coins and use magic scrolls to complete all missions and save your village!” The Visual Forge

Ninja Shuriken is a fun game to play, but as I mentioned earlier, it gets difficult pretty fast. On each level to obtain the three stars (in this case that seems most appropriate), you have to hit all of the objects that hold hidden coins or health, and defeat all of the ninja that are sent out to attack you. The  green ninja can be defeated with one shuriken, and the blue ninja take two shuriken to defeat. What makes it challenging is the amount of ninja on the screen, and the slow movement of the villagers, that always seem to be in the way of you successfully attacking the ninja, before they run off screen.

Controlling the throwing of the shuriken is easy. You basically flick in the direction you want your shuriken to travel. You can throw them quickly and relatively accurately. I did find that throwing the shuriken at higher angles, proved to be more difficult, but it was not a game breaker.

On each level you are given three health points. If you are hit by the enemies’ shuriken three times, it is game over. Since Ninja Shuriken is a free to play game, you are given three hearts, or three lives, to get as far as you can during your playing session. Once those three lives have been depleted, it is game over, unless you want to spend coins on additional lives. This is where things get a bit expensive as far as in-game currency goes. One additional life will cost you thirty coins. Two additional lives will cost you sixty coins and so on. By level ten or so, I had amassed sixty coins. 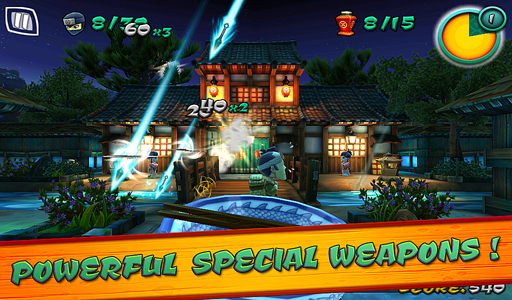 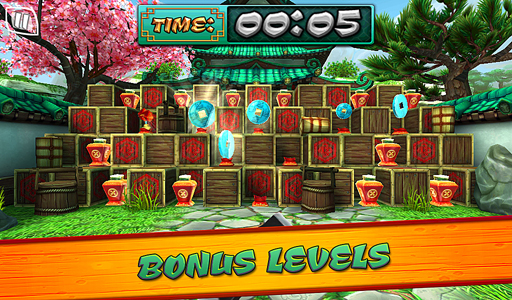 There are currently two areas in the game, with an additional area that is grayed out, saying other levels are coming soon. The first area that is unlocked is the Garden, and it has eighteen levels. The next area that must be unlocked with twenty-six stars and a particular ninja, is The village. Within both areas are bonus rounds, where you are given a certain amount of time to collect as many coins as possible by hitting objects or ninja. This is helpful because it gives you the opportunity to boost the number of coins you have. These events can only be entered every twenty-four hours.

Visually the game is impressive. The art style is akin to the game Mini Ninjas, which was released back in 2009 for PC and consoles. It was developed by IO Interactive and published by Eidos. All of the characters look like small ninja darting throughout the environments. You can tell that The Visual Forge is comprised of good artists.

Ninja Shuriken is integrated with Google Game Play Services with Leaderboards and fifty-two achievements to unlock. Since the game is free to play, there is an in-game store for you to take advantage of if you so desire. There are the usual bags of coins for you to purchase if you want to buy certain type of shuriken. One of the shuriken that is free, can be obtained by giving the game a +1 on their Google+ page. Once you have done that, you have a shuriken with a G+ in the center of it. Anything it hits, it explodes with +1’s over the screen. That’s a pretty nice touch. Other items in the store include, health shields, dragon shuriken, dragon claws, kunai storm, elixirs for health, and so on. All of these items cost coins. The rate that you collect coins and the prices of the items, seem quite disproportionate to me, but your opinion may be different.

Ninja Shuriken is worth downloading to try it out. The timers aren’t too bad in the game. Though I prefer that there were an unlock in the game so you can remove the timers, waiting five minutes for your three lives to replenish, isn’t too bad. If you enjoy action games that are rapidly moving, with a fair amount of difficulty, or if you enjoy target type games, give Ninja Shuriken a try. It is the probably the easiest way to throw shuriken without hurting anyone.