Every now and then you come across a game that checks all the boxes for enjoyable game play. The game has a character that you care about, it is fun to play, and the graphics and music are done just right. Funkoi LLC, nails it with their latest release, Kiwi Wonderland. Though the genre of endless runners is definitely flooded, this game will definitely serve as a life preserver. It simply is a joy to play.

Weekend Play Game Reviews gives DroidGamers an opportunity to highlight some games that may have been overlooked in a busy week of game releases. Some of the games may have been released a couple of weeks ago, or longer, but they still merit reviewing. This gives you an opportunity to catch up on some good gaming during your weekend.

If a game has a main character, I want to care about that character. No matter how thin the narrative may be, it is important to me to have a little bit of back story. It helps to set the stage for what I am about to encounter. It helps to suspend belief for a few moments as you jump into a game. 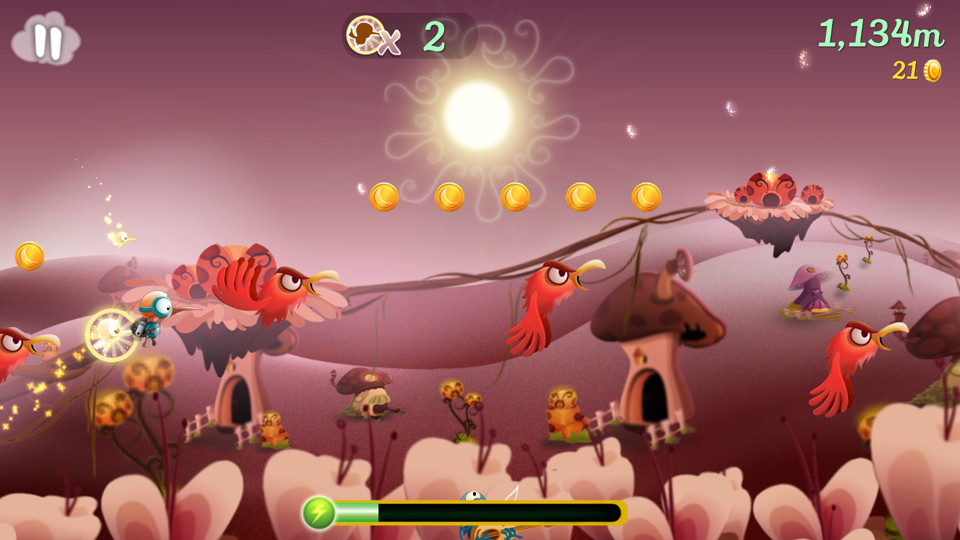 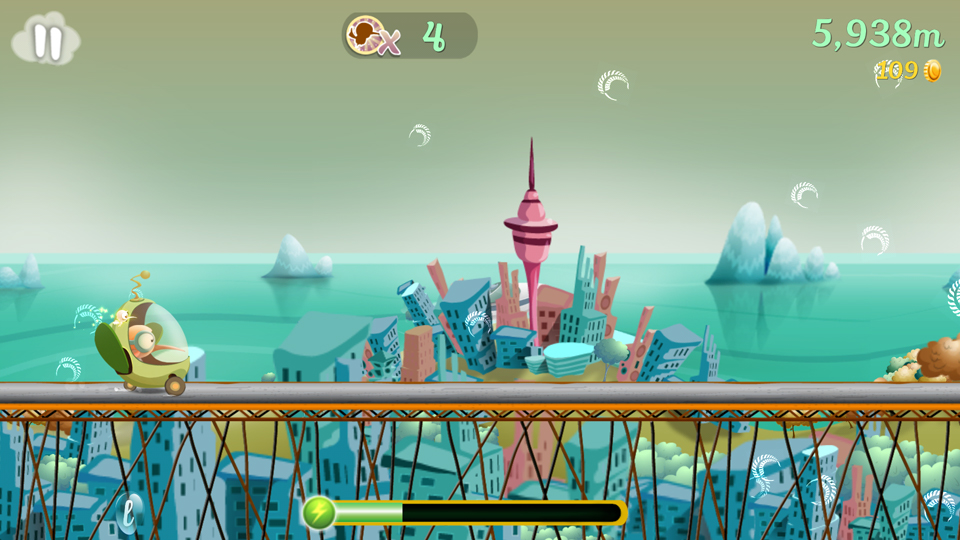 In Kiwi Wonderland, we are introduced to a character that you can immediately care about. He is cute and he has a dream. Funkoi LLC, has set us up nicely for his adventures, and we immediately begin to care about what is important to him.

“Everyone has a dream and this Kiwi wants to fly like all other birds. With a little help from Miley the Dream Pixie his wish is fulfilled, when she shows him the way to Wonderland. Dream the dream and fly.” – Funkoi LLC

If you have played games like Jetpack Joyride from Halfbrick Studios, then you know what to expect of the game play. Since your adorable little kiwi is unable to fly, he is given a jetpack to aid him in his adventures. You will traverse various environments to collect coins, and avoid the spike-filled terrain that inhabits his travels.  The kiwi is controlled simply by touching your screen. Touching the screen allows the kiwi to fly higher, though if you reach the top of the clouds, you are bounced back lower. Releasing your touch allows your kiwi to glide down. As with many of these types of games, the environment is filled with obstacles. They include the spike-filled terrain mentioned earlier, as well as other angry birds (no relation to Rovio’s franchise), puffer birds, turtles and other animated creatures that are bent on your demise.

It has been a while since I have come across a game that has a theme song, or music in it, that gets stuck in your head. The music in Kiwi Wonderland is simply delightful. Rarely do you come across music in a game that simply makes you smile, and that is what this music does. Dare I say feelings of happiness creep up while playing the game. It almost makes me feel a little weird to consider myself a hardcore gamer, and by contrast, having these feelings of mirth while playing this title. Nevertheless,  I like what Funkoi has done here.

The art work that is rendered in the game is gorgeous. The colors burst with expression. All of the characters in the game are drawn with great detail, and they are each articulated differently. A lot of thought and planning has gone into creating the worlds that the kiwi inhabits. It is nice to experience the transitions from world to world. 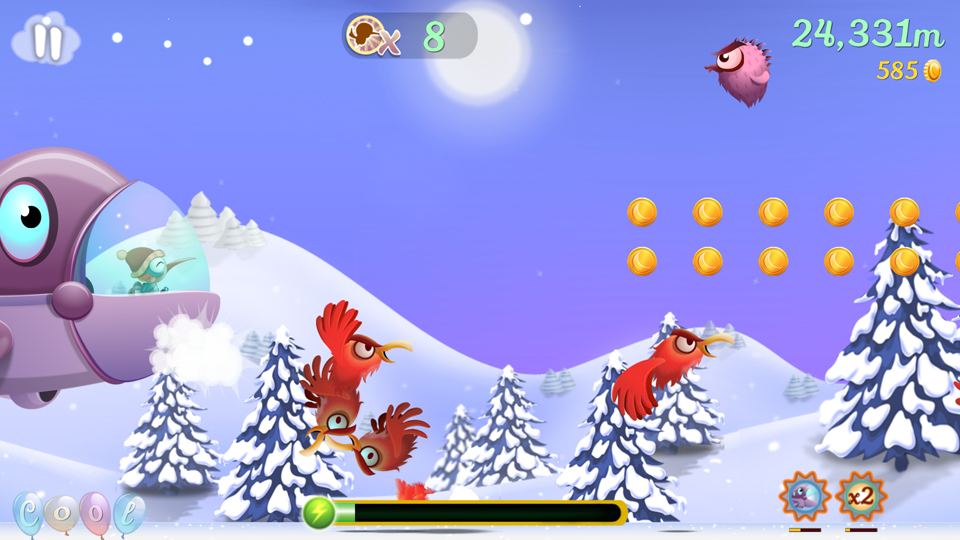 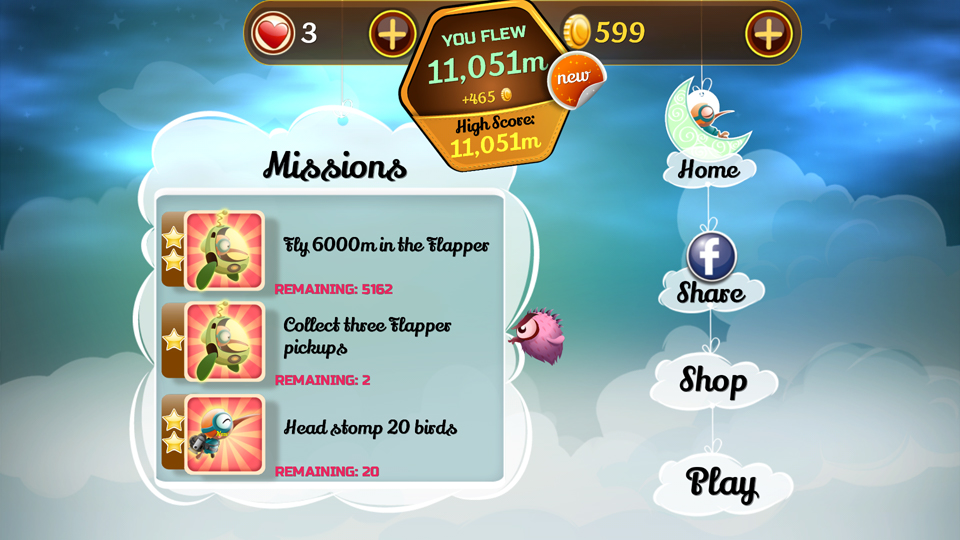 The game is all about traveling the greatest distance that you can. There are power-ups that you can obtain as you fly around. Once you have collected certain power-ups, you obtain different vehicles that allow you to travel faster, and destroy any of the flying obstacles in your way. Again, this is very much like Jetpack Joyride. This is part of the challenge in the game too, how far can you fly until you get the power-ups that you need. There are magnets, coin doublers, etc., that can be grasped during your journey.

There are many missions for your kiwi to undertake that allow him to level up. This keeps the level of interest in the game high. Sometimes you have to fly a certain distance, and other times, you have to hop on certain birds head twenty times. At times, there are letters sporadically placed throughout the levels, that you have to catch, to spell the word of the day. If you are into missions, then you won’t be disappointed in this area of the game.

Kiwi Wonderland is integrated with Google Gameplay Services. It has thirteen achievements to unlock, and leaderboards to climb. The game is a free to play game. The coins collected in the game can be used to purchase different kiwi birds, or to upgrade the skills of your kiwi. There is nothing unusual about what you will find in the shop. The game does have in-app purchases, if you choose to take advantage of them. I have been playing the game for a while and have done so, without having to purchase an item using real cash. What I am saying, is that you can really enjoy this game, without the worry of hitting a pay wall.

Kiwi Wonderland is a great game in my opinion. Sure, the endless runner genre is a bit old and tired at this point. However, Kiwi Wonderland somehow makes it all seem fresh, fun and new. Sometimes, you can judge a game by how long you will keep it on your device. In this case, I will keep Kiwi Wonderland tucked away in that folder labeled fun, which means it will be on my device for quite some time. If you want to play something charming, simple and fun, give Kiwi Wonderland a download. It’s really hard not to like what Funkoi has accomplished with this title.