Fatal Fight is a hard-hitting, gritty, challenging and superbly animated fighting game, with the simplest of controls. TOR Digital Agency and TRACE Studio, have done an amazing job creating this game. After fighting some of the levels, you will feel like Neo, like you know Kung-Fu. The game is not for the faint of heart. It is a mature title, due to the amount of gore that takes place in the game. It is not to the level of Mortal Kombat gore, but this is not a game for young children, in my opinion. What makes Fatal Fight enjoyable to play and have such high reviews in the Play Store, come from several good choices in game design. The controls are excellent, the graphics and animation are great, and there is a fair amount of length to the game. 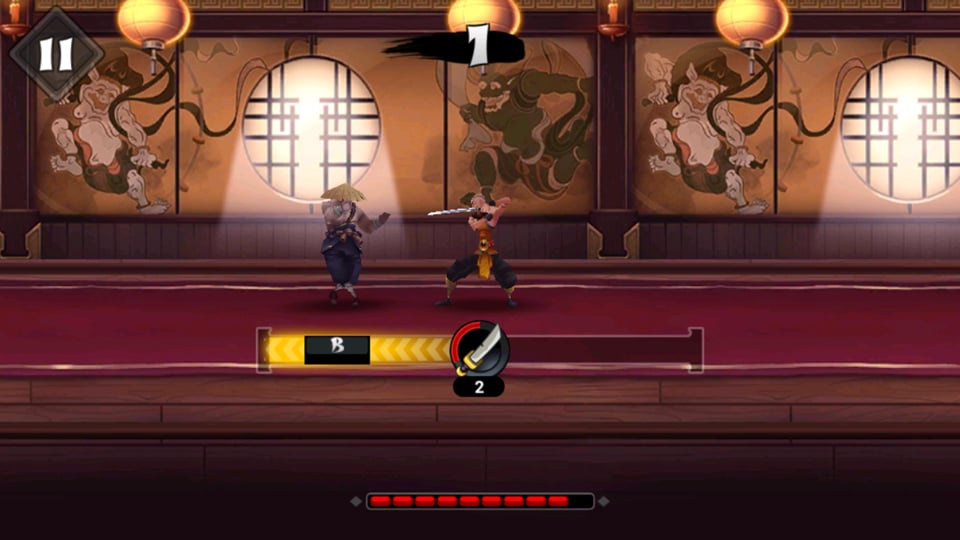 Your main character Master Kai, sits in the center of the screen. You have the choice of tapping left or right, to have him attack the oncoming ninja. You would think that would be relatively easy, and it is in some regards. However, the complexity arises from the number of assailants, and the different characteristics that are involved in defeating them. Some of the enemies you can tap in their direction once, and they are defeated. In other instances, some of the fighters will take multiple taps to defeat. You can tell what it is going to take to defeat them, by the color bar(s) that is beneath the fighter. If a fighter has green and orange, that means it will take two taps to defeat him. What makes this tougher, is the fact that the tap may or may not be in the same direction. For instance, some of the fighters that have two or three bars, will jump over you after you punch them once. Then, you have to tap in the opposite direction to hit them again. Primarily, it is the speed of the game, and again, the number of defenders that makes this tough. If you have ever watched a really good Kung-fu movie, then you know, multiple attacks can come in from all directions. The controls are excellent because they are extremely responsive. When you die, and you will die often, it won’t be because the controls have failed you. It will be because you failed to tap fast enough, or you timed your attack poorly.

The game is a beauty to behold. Though your character only moves left and right, the animation that is in place can be mesmerizing to watch. You can’t get caught up in that though, because if you do, you will die. Once you see Master Kai, the last surviving member of the Lotus Clan flip his sword, or jump in the air and kick a defender, you can’t help but appreciate the work that went into this title. Sometimes he turns into a spinning tornado, and other times he sends a kick that knocks back several oncoming ninja. 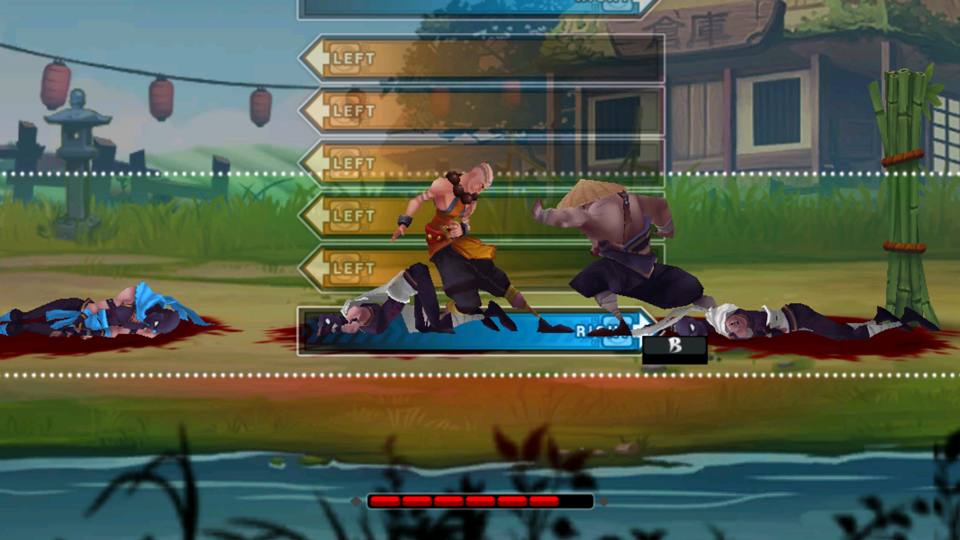 At the start of most levels, different destructible objects are dropped into the scene. Though you can’t break them directly, your flying kick or deadly punch, will send your assailants crashing into either a hay bale cart or barrels placed in the level. It is a nice touch that adds a sense of depth to a 2D backdrop. The colors are bold in some areas and muted in others. One color that you will see a lot of is red. Every punch, kick or slice with your sword, yields blood. I think I mentioned gore before. Yes, there is a lot of blood in the game. Don’t be surprised if you see limbs severed. It would be a nice option to be able to turn off the blood in the game, as some other games give you that option. However, it won’t take you long to figure out if this is a title for you to play, depending on what you feel like you should or shouldn’t see in your games. Fortunately this is noted in the Google Play description. “You must be at least 12 years of age to play or download Fatal Fight. Because the game is extremely addictive and contains bloody scenes.”

There are fifty levels to play in the game. There are Mob Rounds, Defender Rounds, Weapon Rounds and Boss Rounds to name a few. On each level you can obtain up to three stars, depending upon how accurate you are, and by getting the highest combo you can, by rapidly defeating defenders. If you can keep knocking out the defenders one after the other, your combo score grows. This is the best way to get three stars. The stars are used to unlock the next level and open other stages. This game gets hard fast, but because it is so simple in premise, you don’t end up chucking your device across the room. You know it is just taps, and you feel like you can do it, so you go another round.

Your character gains skills the more you play. Some of the skills are rewarded after completing certain levels. The first skill that becomes available to you is Heavenly Swords. The Gods of Kung-Fu drop two shining blades  from the skies to help you in combat. Another skill is Lesser Deflection. It is a defensive aura that completely deflects one hit from the “grey” ninja. You must defeat thirty-seven enemies to activate this skill. You can have up to five skills active at a time. Notice that it says the skill is activated after you have defeated thirty-seven enemies. Each round has a lot of enemies to defeat, and this is where the frustration begins to set in just a bit. Why? Because Fatal Fight is a free to play game that is slightly hampered by its structure. 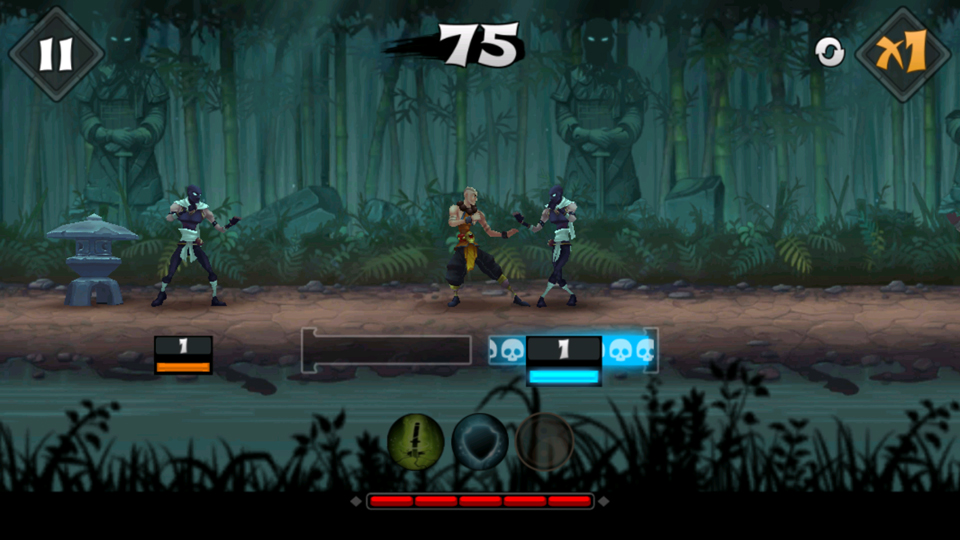 I enjoy nothing more than long gaming sessions if they are available. Unfortunately, I don’t have long expanses of time for gaming some days. So, when I do have the opportunity to play, I don’t want to deal with timers. That is why I don’t mind paying for a game to get rid of ads, or paying to unlock a game to get rid of the timers. Yes, I have experienced some good free to play models, so free to play is not the end of the world to me. What can be frustrating though, is finding a great game, and then not really being able to immerse yourself in it the way you want to because of limited options.

You are given five lives in Fatal Fight. Yes, they do replenish over time, but not very quickly. Based on the difficulty of this game, it makes it harder to enjoy it when timers are involved. On an early weapon round, you have to defeat 141 enemies. Yes, 141 enemies. You can only get hit five times or it is game over. I got down to 2 defenders left. I was feeling more like Morpheus than Neo  at this point. Then it happened, I was down to my last life and I had one red bar left, meaning I could only get hit once, and then the oh crap moment happened. A brawler came out as the last defender. Brawlers are huge and require ten or fifteen taps to defeat. Needless to say, I didn’t make it, and then I had to wait till my lives replenished to do it all over again.

There is no in-game currency that you can accrue to gain extra lives. The only way to get extra lives is to request help from friends, if you choose to link your FaceBook account, or if you go to the in-game store to purchase amulets. One amulet, which equals five lives will cost you $1.03. Six amulets, which is equal to thirty lives, will cost you $5.22. An infinite pack, costs $10.45. Thus, for $10.45, you can play the game without timers. Based on how much I have played, and how much more is still left to play in the game, the price doesn’t seem outrageous, but a little high in my opinion. If you don’t want to pay ten dollars, you will be playing the waiting game. 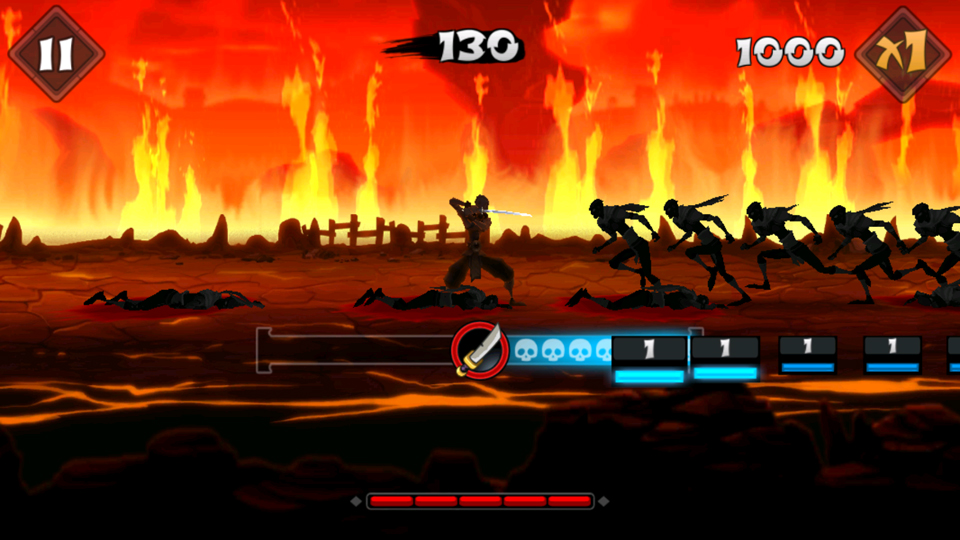 The game is integrated with Google Game Play Services. There are twenty-nine achievements to unlock, and leaderboards to ascend, based on if your friends are playing the game or not. If you are a fan of martial arts movies, then you will undoubtedly recognize some of the names of the achievements, like Enter The Dragon, Man of Tai Chi, Karate Kid, or Shaolin Warrior. This just shows the level of detail that has been put into what I believe, is a great fighting game.

You can’t really go wrong with Fatal Fight. It is a really enjoyable game that is fast, fluid and fierce. It plays well on your phone or on your tablet. The music, animation, sound effects and controls are hard to beat. If you enjoy fighting games with flawless controls, Fatal Fight should be high on your list. Be warned though, unless you plan on dropping ten bucks to get infinite lives, you will be playing the waiting game on this title.

TOR Digitial Agency plans on developing the game more, if all goes well with the release. I for one, would like to see additional options added, to help the player, play the game longer. I am not a big fan of ads in games, but having the opportunity to watch a quick video for a couple of lives, wouldn’t be so bothersome to me with this game, because it is one you want to keep playing. I believe that is what every game developer hopes will happen. I believe it will happen more with Fatal Fight, if a few additional options to keep playing this great game are given.