Leo’s Fortune is a platformer by 1337 and Senri. This is a game that’s gorgeous to look at, and fun to play. In some ways, it felt a bit like a modern riff on the classic Sonic games. In other ways, it’s short, sweet, and to the point. Let’s see how.

In Leo’s Fortune, players will assume the role of Leo. Leo is an undefined little furball, which I could best liken to a green weepul that swapped his adhesive feet out for a handlebar mustache and a Slavic accent. Leo is also a very rich engineer, who obtained a fortune in gold coins, and this eponymous fortune ends up being stolen. The story isn’t deep at all, being merely contained in some cut scenes that show black and white pictures with some voice over from Leo. That’s not to say that those scenes aren’t enjoyable though, the story just doesn’t go very deep when they arrive. It touches on themes of familial greed and mistrust, with a side-order of a large and ominous robot. The game focuses more on the former, as Leo suspects one family member after another, shown in one of those cut scenes every few levels, but it’s all tied together neatly at the end. Given that much of the development focus seems to have been put into the visuals, layout, and puzzles, I see no harm done here. It’s designed to be a simple platformer, not an extrinsic RPG. 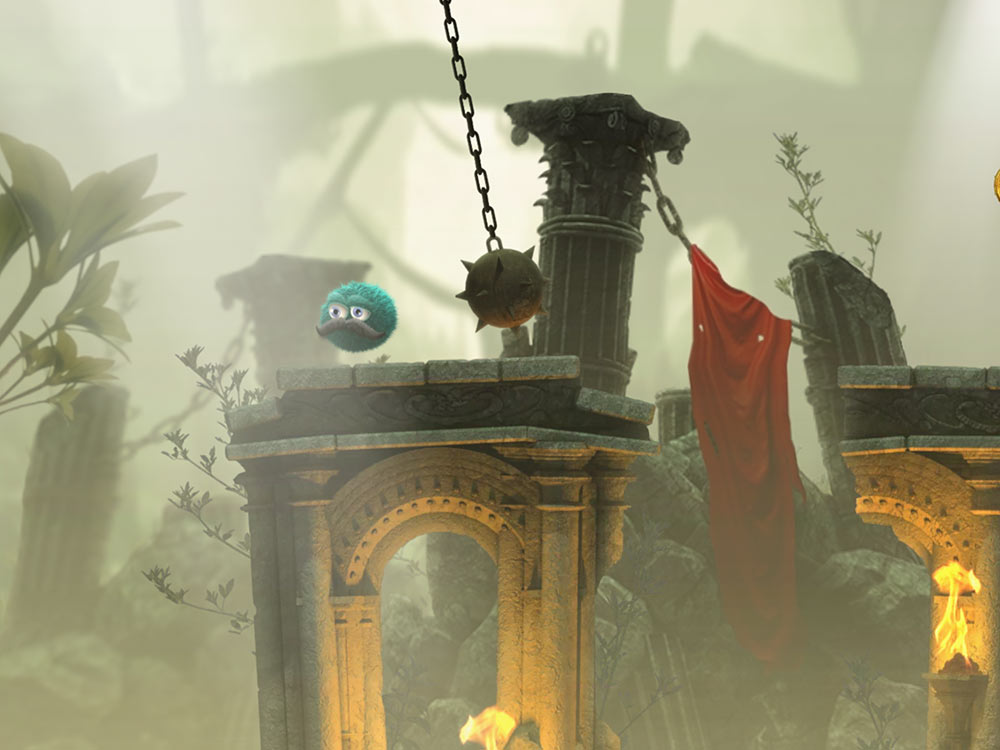 The gameplay for Leo’s Fortune is as strait forward as the story. Swipe left or right to move Leo in the desired direction, using the left thumb. Right thumb swipes up and down to jump/inflate (more on that later), or dive. Virtual, on screen controls are an option as well. With the game being a platformer, players start each of the twenty levels on the left and work towards the right. And this is where the allusions to Sonic begin to enter. First, the layouts of the levels are similar to that of Sonic, with gradual ups, downs, and loop le loops.

Second, just as players would grab up golden rings while playing through a given level, golden coins are similarly sprinkled throughout a level, to be picked up as a player goes along. Third, there are springpads, just like in the Sonic games. You don’t charge up your speed, but you do run into them to be propelled off of them at a higher speed. And as much as it sounds like this game is a Sonic clone, it’s not. Think of those similarities as more of a hat tip. They’re nice allusions, but not much more as this game is otherwise very distinct. The levels are broken down into groups/worlds of four, each in a different area that themes them out. For example, one set of four are in the desert, while another is the mountains. Each “world” looks very distinct, and has an emphasis on particular traps and hazards, but not exclusively so. 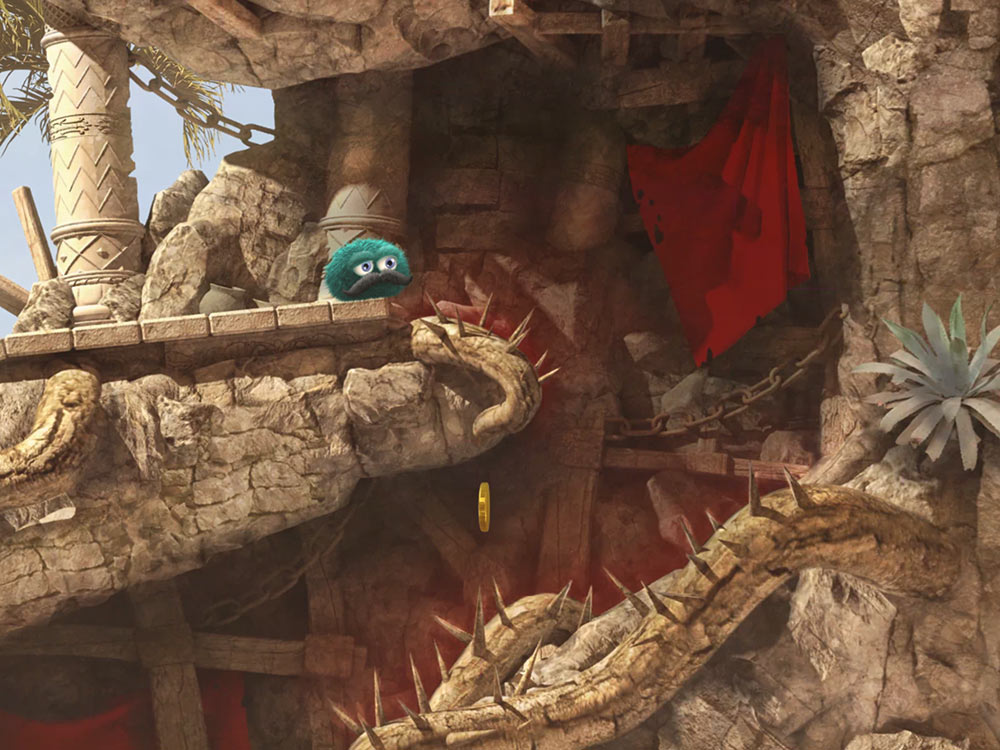 So one “world” will focus on a high number of spikes, while another will focus more on tricky jumps. And it’s worth mentioning that the appearances of the levels is absolutely gorgeous. Leo’s Fortune is most definitely easy on the eyes. The graphics looked very good on my Shield Tablet, and everything ran smoothly. The appearances use a parallax style scrolling, where the images in the distant background scroll at a slower rate than the foreground, achieving the 2.5D effect quite nicely. They even work in some stuff into the foreground, passing “between” Leo and the viewpoint of the player, though this is never out of place. Things that are viewed “too closely” or too distant are nicely blurred at times.

At the end of each level, players are graded on three metrics. First, whether or not a player was able to collect all the coins. Second, a star is awarded based on whether or not the player died. Leo has unlimited lives, and most of the time the spots where Leo re-spawns is pretty generous, but that second star was only awarded to me the one time I completed a level without dying. The third star is awarded when the player gets Leo through the level, under a threshold of time. 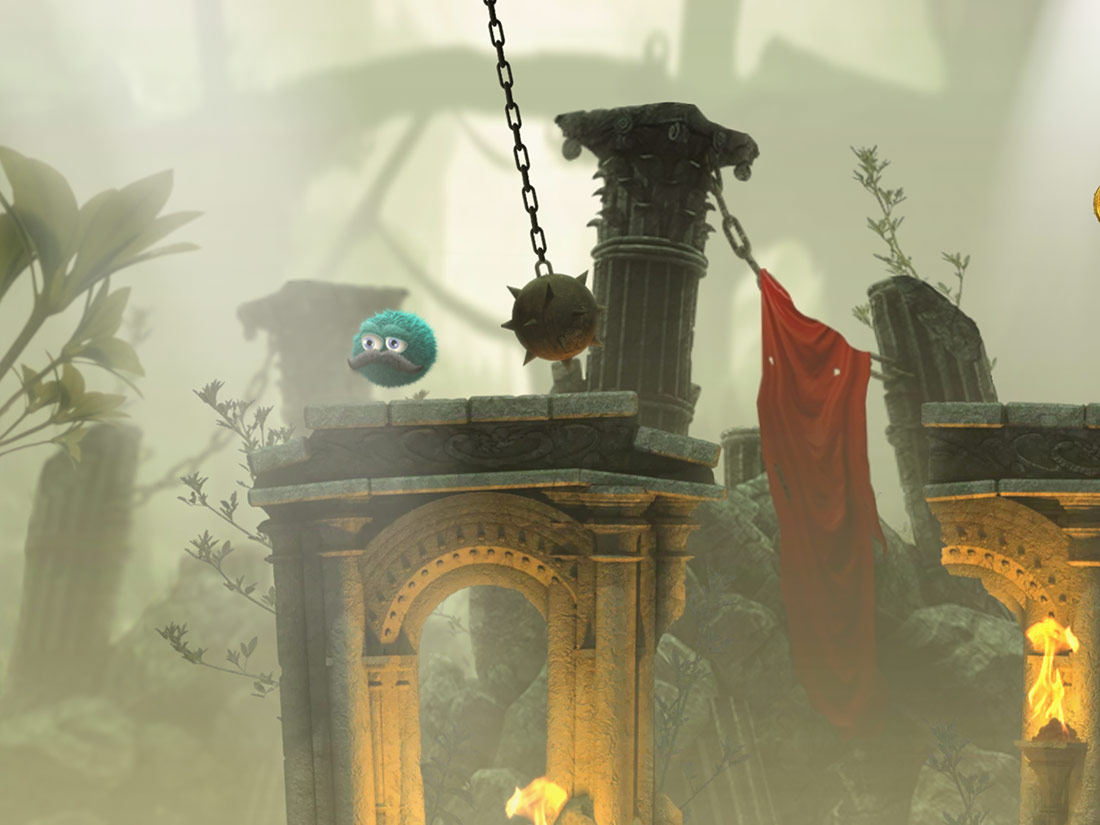 There is a bonus world at each level that gets unlocked when enough stars have been awarded on that world, as opposed to the player’s total star count. This does open the door to extensive replay, as the fact that there’s only twenty levels leaves the game a bit short otherwise (I completed it in two evenings). The game has only only one save file though, so bear that in mind. The soundtrack is good and fits the game nicely. It’s an upbeat instrumental tune, that is simple and a bit repetitive, like one would expect with a platformer to begin with. Lastly, Leo’s fortune integrates with Google Play games.

In conclusion, it’s difficult not to recommend this game, especially if collecting all the stars is the type of incentive that appeals to you, especialliy if you are they type of player that will replay a level until it can be completed exclusively on muscle memory. This game should also appeal to players that enjoy strait forward platforms, or just gorgeous graphics. The game is currently available on Google Play for $4.99.