The Tribe Games is a studio based in the Ukraine. The head of the studio, is a past BMX Champion of Ukraine, Andrew Sirchenko. He and his team of eleven digital enthusiasts, have recently released Stickman Trials for Android devices. It is a colorful BMX trials game that is easy to play, and has a variety of tracks. While it is fun and immediately accessible, mastery of the game will take some time.

I came across Stickman Trials while it was in soft launch back in October of last year. I was immediately impressed by the artwork. I thought it was interesting that on the one hand, the artwork was colorful and detailed, and on the other hand, the central character was a stick figure. Motorcycle and bike trials games became popular a few years back, when RedLynx Ltd. introduced the world to a new wave of difficult 2.5D style of racing game with Trials HD. It debuted on XBox Live back in 2009. Since then, many game developers have tried to emulate the success of the original game. While Stickman Trials is not as difficult as Trials HD, or its successors, it wasn’t designed to be that way. 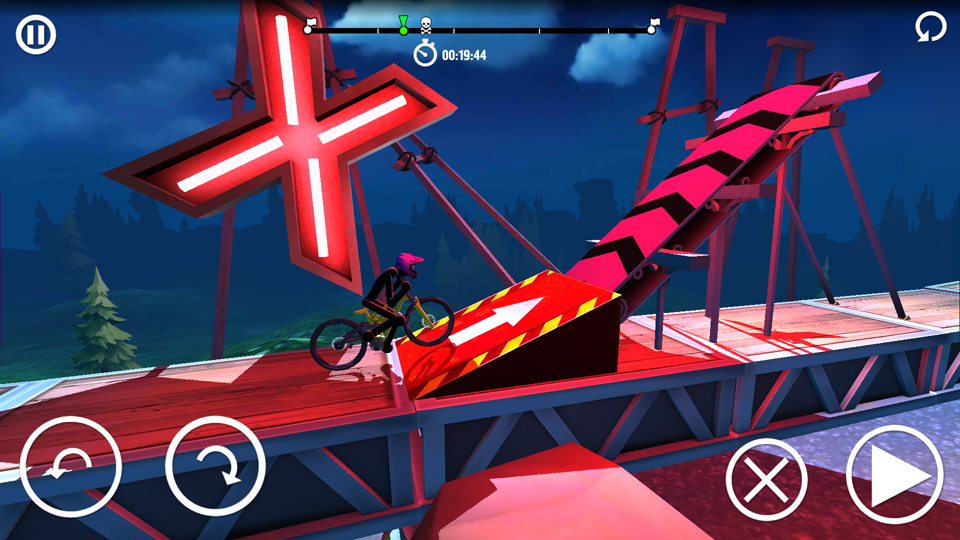 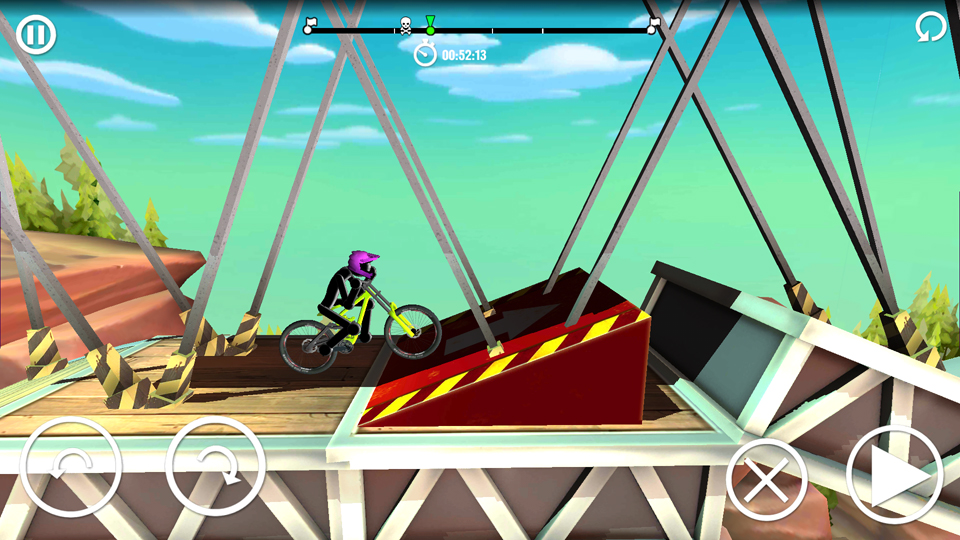 The main aim of Stickman Trials is to give perfect game-flow of great physics and fun challenging levels. I prefer mid-core philosophy in game design – easy to play, but hard to master. – Andrew Sirchenko/The Tribe Games

Stickman Trials has you tackling thirty different courses, with a large variety of obstacles placed throughout. This variety keeps the game play interesting, as well as challenging. Whereas it may be relatively easy to complete a course, to obtain the three stars in each level is going to take some skill. You will have to jump over thorns, careen safely down large steps, get catapulted in the air by gravity platforms, and know when to slow down or speed up, because of escalator type moving ramps… and those are just a few of the well-designed and placed obstacles. The tracks are fun because you never know what is around the bend. You are awarded a star for each time you meet or beat,  the required time for track completion. Seconds are subtracted from your final time if you are able to pull off back-flips, front-flips, or rear and front wheelies while you are racing. Just finishing the course won’t get you three stars, and that is where mastering the game comes in.

The controls for the game are simple. There are two buttons on the left side of your screen and two on the right. Acceleration and braking is on the right, and rotating your cyclist forward and backward is handled by the buttons on the left. You also have the option of using tilt controls, but when I tried to use them, it made the game almost impossible to play successfully. To enjoy the game, using the first option for controls is best. The touch controls were quite responsive. At times, my bike seemed to float a bit. I think this could be balanced out easily with a tweak here and there from the developer. 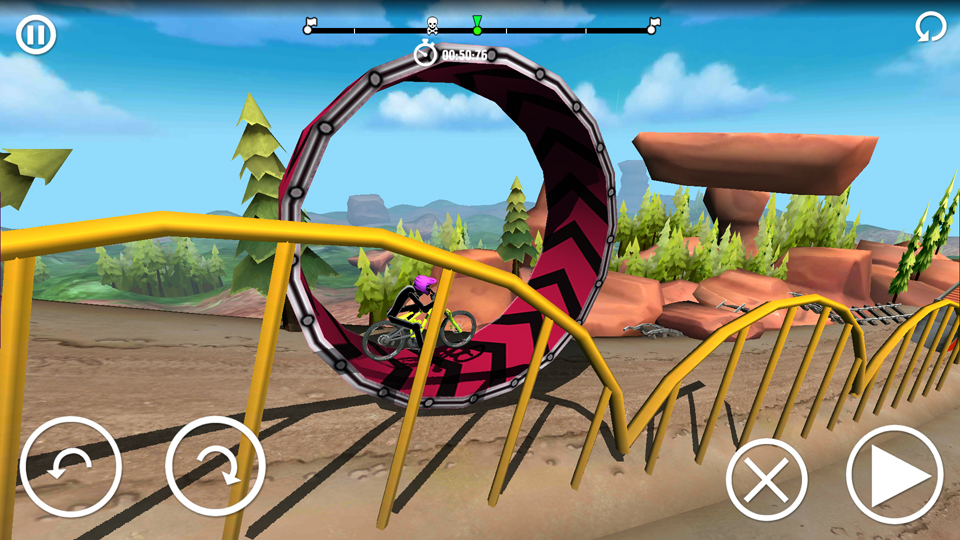 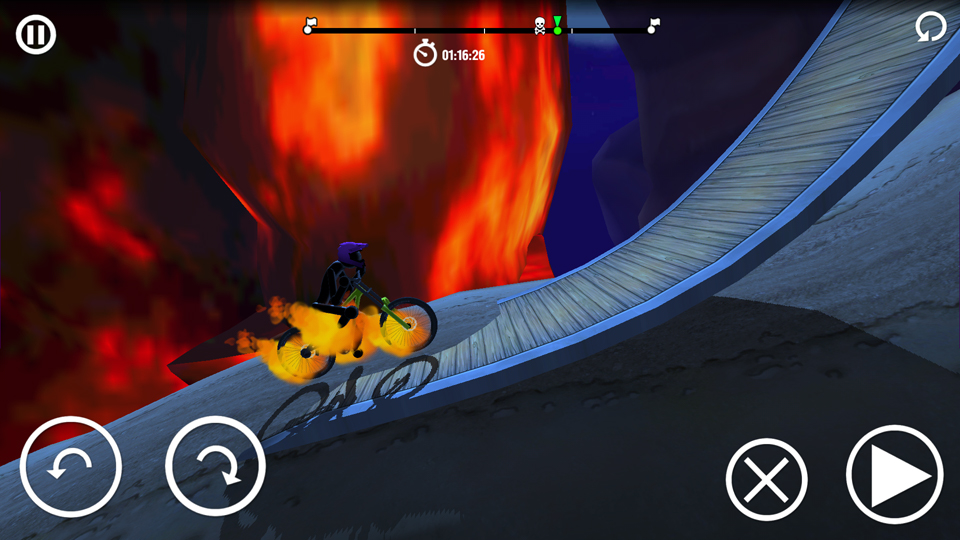 Stickman Trials is a free to play game. As with most free to play games, you have a bar for energy that fills over time. If you continue to successfully complete tracks, it is not a problem. If you fail, you will lose one life. Currently the energy meter has seven bars. There is the option in the in-game store, to immediately fill your energy bar, fill your energy bar +3 or +5, to max out your energy. You also have the option of purchasing helmets, which saves your life during game play. Putting on a helmet changes the color of the helmet your racer is wearing. If he crashes, the helmet flies off, and your standard purple helmet returns, but your rider doesn’t die. You can purchase helmets in packs of 5, 10 or 15. There is also a garage, where you can switch out your bike. There are seven different bikes to choose from. They can be unlocked with a combination of stars, watching ads, liking the game on FaceBook or other combinations, including using real cash. The store is not completely out of control like in some games. The most expensive item for a new bike or pack of helmets is $3.00. The only concerns I have in this area, is that there is not a restore purchases button, and for some reason, the Facebook tab doesn’t seem to work.

The game is integrated with Google Game Play Services. There are global and local leaderboards. It also has a multiplayer component which is nice. You can play against friends, or it will match you up with a random player. During this portion of the game, your opponent is shown outlined (like a ghost player), so you can see if they are ahead of you or behind you. It works well, and the competition is fierce. A random track is chosen for you to compete on. This extends the game play quite a bit in my opinion, and is a nice addition to the game.

Overall, Stickman Trials is an enjoyable game to play. A little fine-tuning of the controls will make the game even better to play. The Tribe Games have successfully created a game that is easily accessible to newcomers to this style of game, and will keep hardcore gamers challenged for a bit, as they attempt to three-star every level. The developer is continuing to update the game, and is planning to add over 90 new tracks, new bikes, and different game play modes. If you enjoy Trials type games, then Stickman Trials is worth a look. It has a lot going for it, and more is to come from this Urkaine-based studio.