Ittle Dew (think “It’ll Do”) is what was once referred to as a maze adventure (well before Action RPG was around). Styled after the Legend of Zelda series (at least the older ones that favor the top-down perspective), Ludosity manages to both tip its hat to the classic franchise, as well as fashion a game that is great in its own right. It walks that proverbial tightrope easily.

[UPDATED: May 12th, 2015 – 3:13 AM] We raved about how good this game is. If the initial price kept you from purchasing the game, now you should probably take another look. Through the Humble Bundle Store, Ittle Dew is now on sale for a very limited time. The Humble Bundle Store is having its Spring Sale. Most of these sales only last a day, and this one popped up yesterday, so if you want it, grab it now. Ittle Dew is currently 80% off. This gets you the Android version, and a Steam key so that you can unlock the game and play it on your PC. The game is $1.99 right now. What are you waiting for? Click on the link just below this paragraph to download. Also, there are a lot of great games on sale in the store, so you might want to peruse through them. As always, all sales benefit charity!

The game play for the game is fairly straightforward. Players assume the role of the eponymous Ittle Dew, the female clone/counterpart to Link (short, blond, apparently quite young, decked out in green, game protagonist, etc), who wakes up on a raft that has just come ashore on an island that needs adventuring. Accompanied by a sardonic (and quite humorous) flying fox named “Tippsie”, whose wings and (sometimes helpful, often humorously sarcastic) comments are both a functional tribute to Navi. Even the life meter is quantified in hearts, though players don’t expand it by finding the conventional “piece of heart”, but rather find loose scraps of paper that function as extensions to be taped on to what’s already at the top of the screen; taping on four scraps allows the life meter to grow by one heart. While this nets the same result as the Legend of Zelda, doing it this way is MUCH funnier. 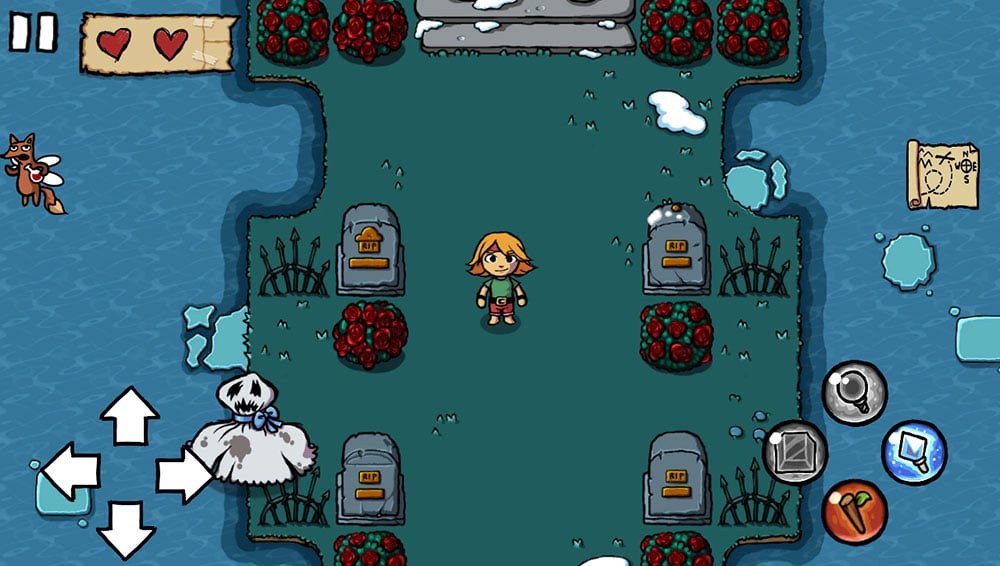 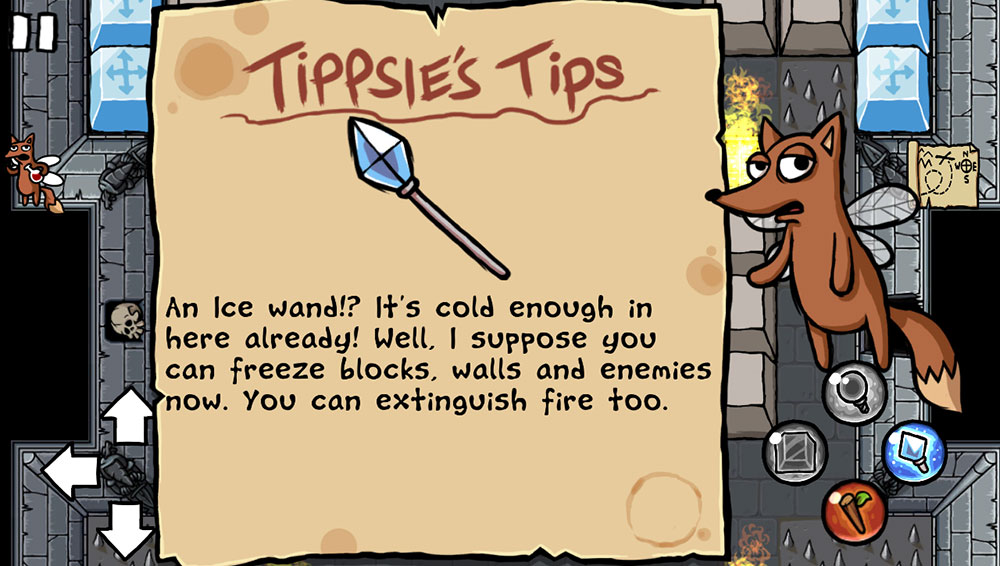 Once completing a tutorial cave called “Tutorial Cave”, they begin unraveling the story, which hinges on retrieving an artifact for a pirate (of sorts) who, in return, offers to swap a raft for it, enabling Ittle Dew to continue on from the island. The artifact in question resides atop the island’s castle, and is guarded by a plethora of baddies, and a multitude of puzzles that will require solving. There are also wizened old men offering advice and tips, blocks and bombs to be utilized, floor spikes to be avoided, doors to be unlocked, caves to be explored and flavor cards to be collected that do nothing beyond providing flavor. There are a small handful of useful weapons to be acquired along the way, though that’s the extent of anything close to “RPG” elements players will see in the game (and why I refer to it as a maze adventure). All of this adds up to quite the entertaining game.

The controls in the game are typical for what’s out for mobile gaming, with either swipe gestures or a virtual D-Pad available to the player. The former uses taps and and swipes to utilize weapons and navigate, the latter shows the weapon and directional icons on the screen. The graphics of the game are simplistic with a cartoony flair in a way that works; while nothing remotely close to stunning, or cutting edge, they do great job and should run well on just about anything. For example, my 2012 Nexus 7 ran it without any problems. 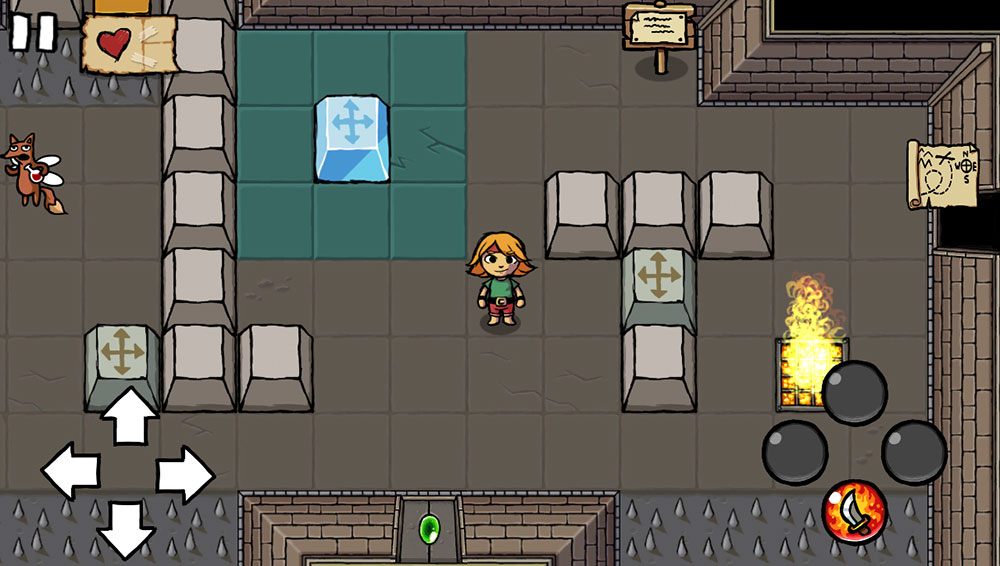 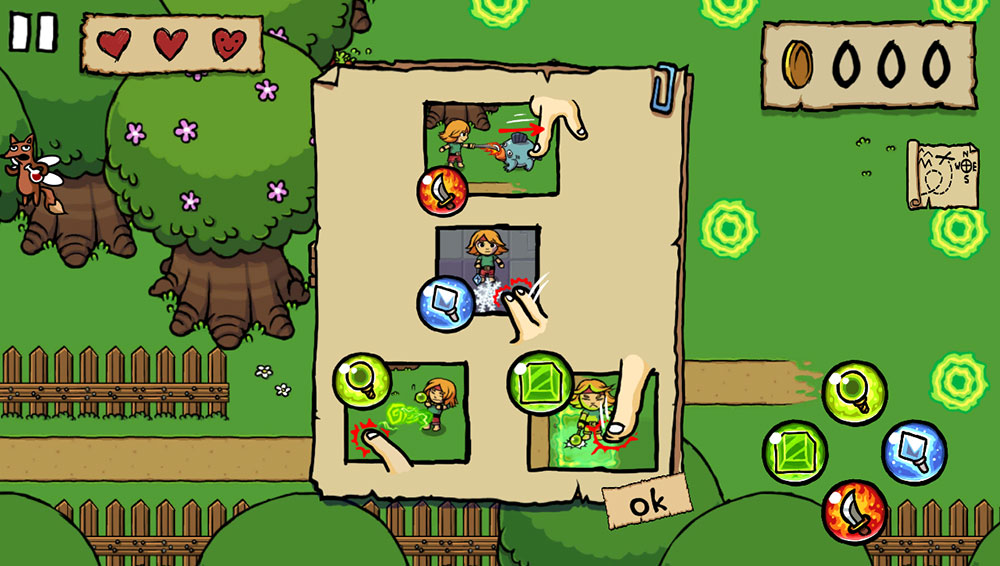 The soundtrack is an instrumental that again, while it is stylistically in the zip code of what you might hear on a classic Zelda, like everything else in this game it’s catchy and solid in its own right. I also noticed how the sound effects in the game are directional. For example, there’s a particular enemy that flies and sounds like a helicopter while doing so. When that enemy was left of Ittle Dew, the helicopter sound was louder in the left channel of my headphones, and the converse would apply when relevant sounds were to the right. While not revolutionary, it was a nice touch to include.

On the whole, this game is great. The soundtrack, the cartoony style of graphics, the humor (even the trailer is amusing), the puzzles, all were great. This game was well thought through, from top to bottom. If you have any appreciation for older Legend of Zelda games, or just appreciate good top down, maze adventures, this game is definitely for you.