Last week Jaymes finally posted about where I have been after a week of absence. The reason it took so long to post about it is because I wasn’t expecting to be out of commission for so long. I figured I would be a few days in a hospital bed, possibly able to work from there, and then back to the daily grind once I was home. That, however, was not the case, not even close to it.

NOTE: Please be aware, there is a picture of my back surgery wound in this post. It’s not gross or anything, but if you can’t handle cuts and stuff, you might not want to read this article or scroll past the image. You can see the cut and the holes from the staples healing. Some people are curious about what it looks like so there it is. That is why this post is labeled as NSWF (Not Safe For Work).

For those of you who read Jaymes’ post, you may have seen my comment that I left explaining what was going on but in a more short form. I’ve finally been cleared by the doctors to actually get back to to work, albeit I have to work my way back up to working full days. So what happened to me? Well due to an injury I sustained during GDC 2015 at the hotel I was staying at, I injured my back. At first I thought it wasn’t that bad but within a month I had begun losing feeling in my left leg and I was suffering from extreme back pain. As it turns out, I slipped two discs in my back so badly that the only way to fix it was surgery. 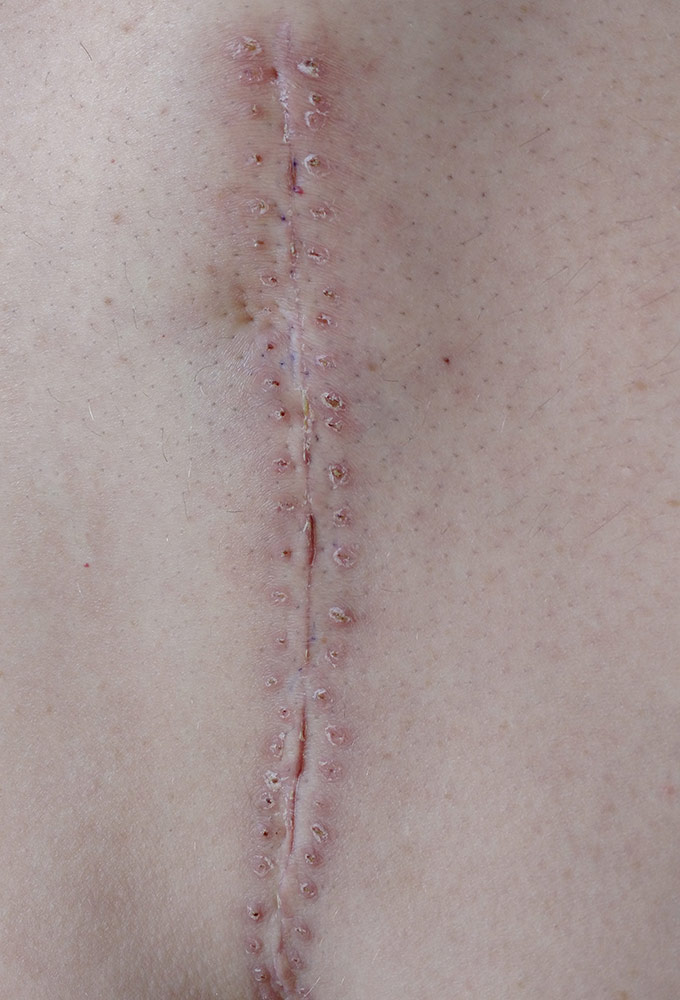 Picture of surgery wound as of a day ago, staples removed.

After leaving the hospital I thought I was going to be able to work but the doctors said not until I’ve healed more and have more movement. Thursdays I got 28 staples out of my back which was keeping the foot long slice they made to do all this work on my spine closed.

So now that I am back in action, I do have to take it a bit slow for the next few days in order to strengthen my ‘core’ as the doctors call it. This means I can’t sit for too long without moving. Why am I telling you all of this? Well I’ve always prided our site as being community-based as much as possible and I always try to be as transparent as possible with what’s going on with DroidGamers. The team here did a great job covering the news as best as they could while I was down and between that and the support of you, the readers, it has made recovery easier even though I have a long road still ahead of me. So I wanted to say thank you to everyone for the support shown. I appreciate it far more than I could possibly write here.

So over the next week posting should get back to its normal amount, if not more. TwitchTV streaming will have to wait until probably next week unless my back is feeling strong enough for it. In other words normality is almost back! However, we are about two-three weeks behind on releasing the new site design, our new store, and the next beta version of our app.