Since the Nvidia Shield Android TV is almost upon us, and with lots of us being happy that the 500GB model is actually a real thing, we figured that we would list ten games that will be making the jump from PC/Consolel to the Shield Android TV console, many of which should be available at launch. Some of these games are currently available for the Shield tablet and portable already. Most of these games also made a brief appearance during Nvidia’s GDC 2015 press conference as well.

Despite being more than a decade old, Valve’s seminal sci-fi-themed FPS sequel still holds up remarkably well today and its visuals and head crab-obliterating gameplay have made a smooth transition to mobile via Nvidia’s Shield family of devices. And if you can’t get your fill of Dr. Gordon Freeman with just Half-Life 2, there is also the follow-up title, Half-Life 2: Episode One, which is also on Android but exclusively on SHIELD tablet.

Valve’s first-person puzzler may have been spawned from the same universe as Half-Life, but its gameplay couldn’t be more unlike the shooter. Instead of braining foes with a crowbar or exploring the dystopic City 17, players are forced to rely on their problem solving prowess to overcome Portal’s many mind-bending puzzles.

It’s hard to believe a game that could only properly run on the latest PC hardware at the time of its release can be played perfectly on an Android-based device just two years later, which was demoed during GDC 2015. Featuring impressive FPS visuals powered by Crytek’s CryEngine technology and full support for the SHIELD controller, Crysis 3 is now headed to SHIELD Android TV.

Based on Konami’s award-winning Metal Gear franchise, Metal Gear: Revengeance is a fresh spin on the stealth series that casts players as the katana-wielding cyborg, Raiden. Instead of sneaking around and silently dispatching enemies, players take a much more head on approach as they hack and slash targets with dizzying ferocity. The game is slated to launch on the Nvidia Shield Android TV soon. 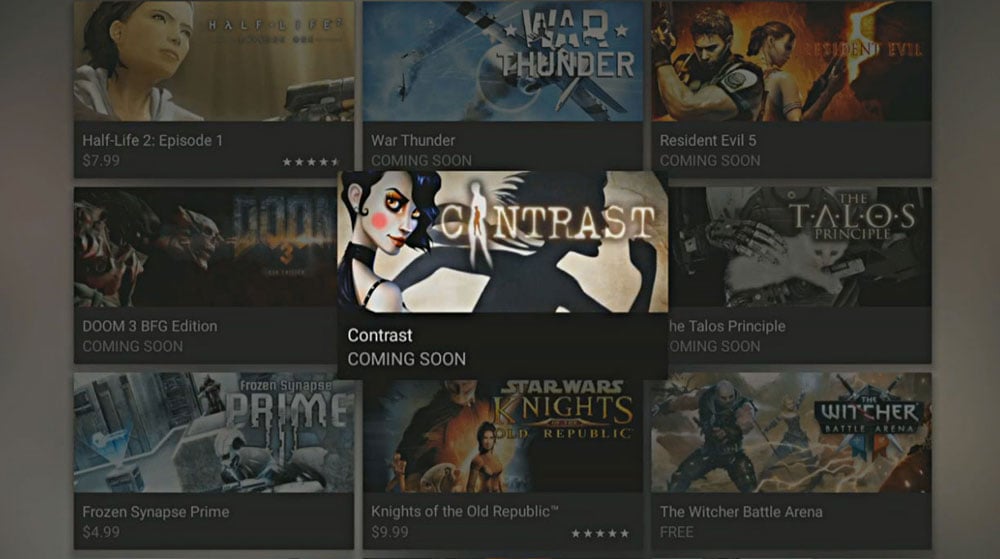 Set five years after the events that unfold in Borderlands, the sequel to Gearbox Software’s first-person RPG hit is every bit as memorable and worth playing as the original game. And now Shield owners can fire up Borderlands 2 on their device by streaming the game via Nvidia GRID.

Id Software is essentially responsible for giving life to the first-person shooter genre with its demon-blasting FPS, Doom. Now, the ultimate Doom collection, which includes Doom 3, its expansion packs as well as the original Doom and Doom II, is launching on Nvidia Shield Android TV along with a slew of graphical and gameplay enhancements. If you were watching our GDC 2015 coverage, you got a sneak peek at this game as well.

Available on Android devices, and recently also released for the Nvidia Shield tablet, Playdead’s monochromatic platforming adventure is one of the better indie games to emerge in recent memory. While it may not be as graphics intensive as the rest of the games on this list, its addictive gameplay and eerie atmosphere make it a must-play experience for any gamer.

Considered by critics and fans to be one of the best, if not the very best, Star Wars video game to date, BioWare’s Star Wars: Knights of the Old Republic is an epic role-playing adventure set in the Star Wars universe where players must choose between good and evil. Knights of the Old Republic is available on all three generations of Nvidia Shield devices including the upcoming Shield Android TV.

Inspired by Greek mythology’s Talos, a tale of a man made entirely out of bronze, The Talos Principle is a first-person puzzle experience from the development team behind Serious Sam. The game has an impressively detailed world, which combines ancient stone ruins, lush greenery and futuristic technology, all of which you will need to use to find solutions to the puzzles presented to you. Visually, this game looks every bit as great on the Shield Android TV as it did on PC, which we also saw during GDC this year.

Boasting impressively detailed World War II planes, War Thunder is a military-themed MMO that allows players to partake in historically-inspired aerial combat missions. This game features fast-paced action and some pretty great eye candy. This version is pretty much a straight port of the PC version in every way but instead will be playable on the Shield Android TV.

All of these games should be available when the Nvidia Shield Android TV console launches, either at the time of launch or just shortly after it. There is actually a lot more PC and console titles being ported for this console as well, but we can’t say anything more about that just yet. It’s a good thing that 500GB model is real since we are going to need all that space. Some of these, which were announced for the Shield Tablet/Portable not too long ago, will also make their appearance on those devices as well.