Review for Rewind: A short but engaging puzzler for Android

Rewind is a puzzle game that was recently released by Dreamkind studios. And while the game is a puzzler, those puzzles are dropped into the setting of a legal contest. And while fairly short and ending abruptly, the setting is intriguing, as I found myself trying to piece things together as I went along.

The back story for Rewind is one of mistrust, deceit, racial division, a giant barricade, and politics, all of which are thrown together into a blender, a good 500 years into the future. There are two races, at least as it relates to the purposes of Rewind: Deks and Abors, with the former ruling over the latter, and this is done so in a harsh fashion. The game doesn’t really delve into how that came to be, it’s just assumed that it’s been that way for some time. As the game begins, players will assume the role of the main character, an somewhat older male named Kole Zamon. Kole is of royal Dek lineage, and a leader of his people. He is on trial to determine his “blameworthiness” in his alleged crimes against humanity, but it’s done so in a judicial format that’s called a Rewind. 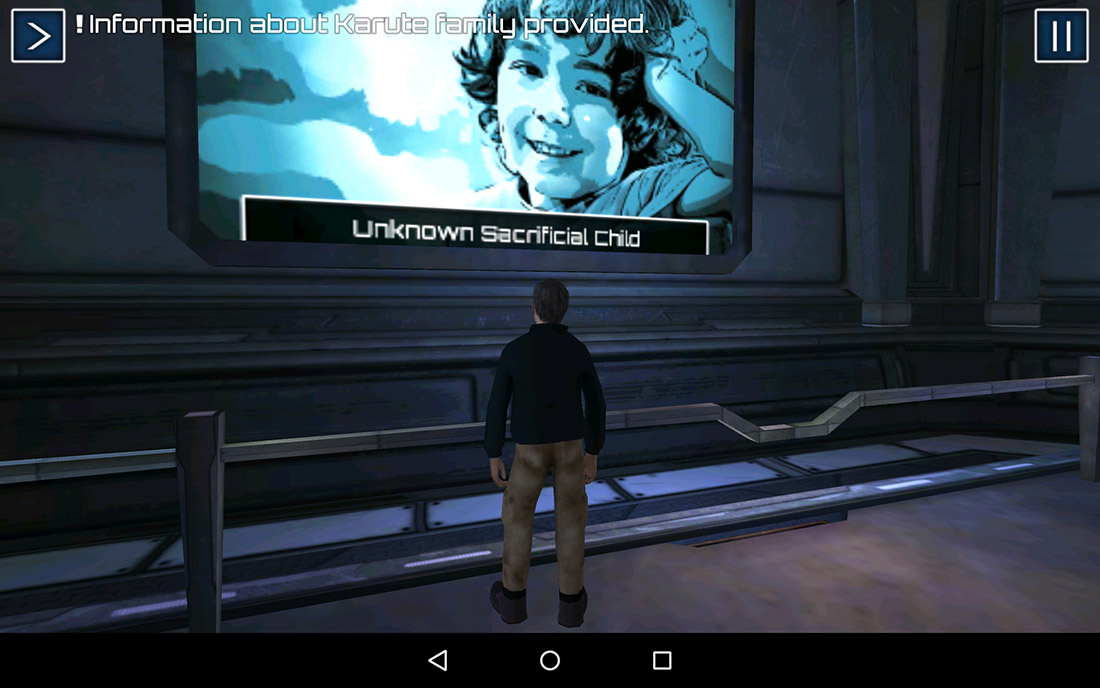 That name is used as the entire life of the person ends up getting examined to assess culpability, in which the scope ranges from the parentage of the accused, up through the present day. The rough equivalency of a prosecutor begins to ask questions and make accusations, from a luxury box of sorts that sits high above Kole, who then watches his life get dissected on several giant monitors, spaced out along the wall of the room in which the Rewind is being conducted. It’s through this process that the story is unravelled. Players don’t begin with much more than what I’ve already shared here, so as Kole begins to examine documents and other evidence, bits of the story are revealed like a trail of breadcrumbs. Doing things this was effective towards creating a feeling of confusion, as details about why exactly you’re being charged are deliberately withheld from the story in the early going. For my given taste in games that trends towards action and RPG (where narratives can take a back seat at times), playing through a game like this that’s entirely story driven was enjoyable. It’s got some dialogue between Kole and the prosecutor, but most of the story is driven through reading various dossiers, submitted statements, and bios. To add a wrinkle to the proceedings, there seems to be outside help that’s hacking in to the system (looking like DOS commands on whatever big screen it takes over), and indicate the locations of things like dead drops for Kole to find. 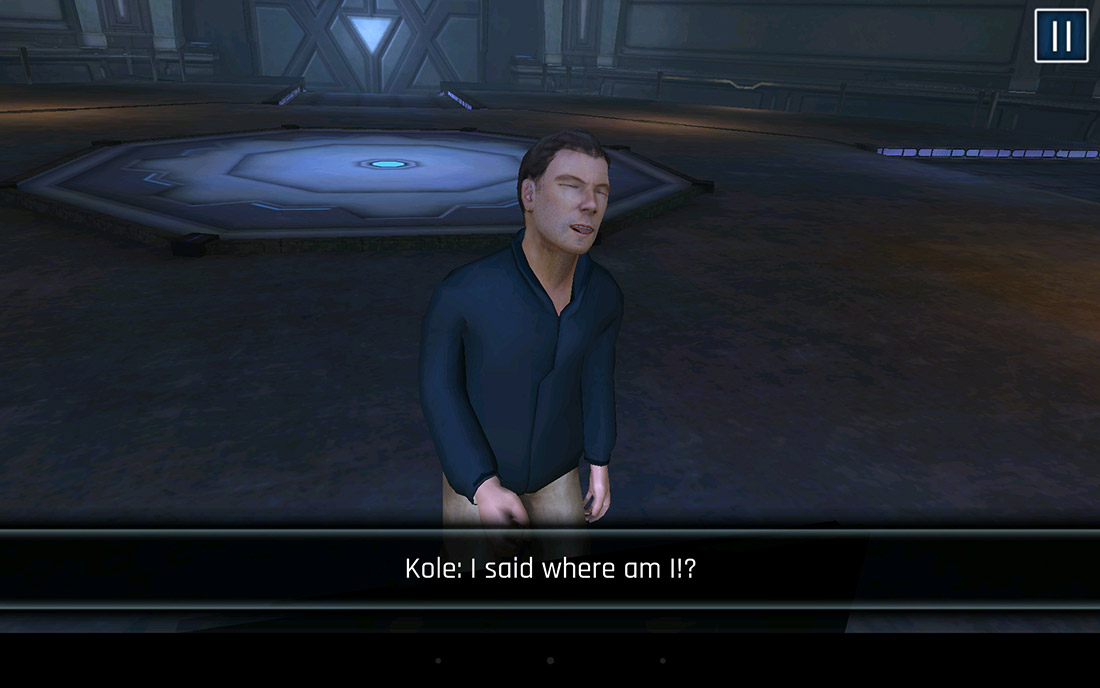 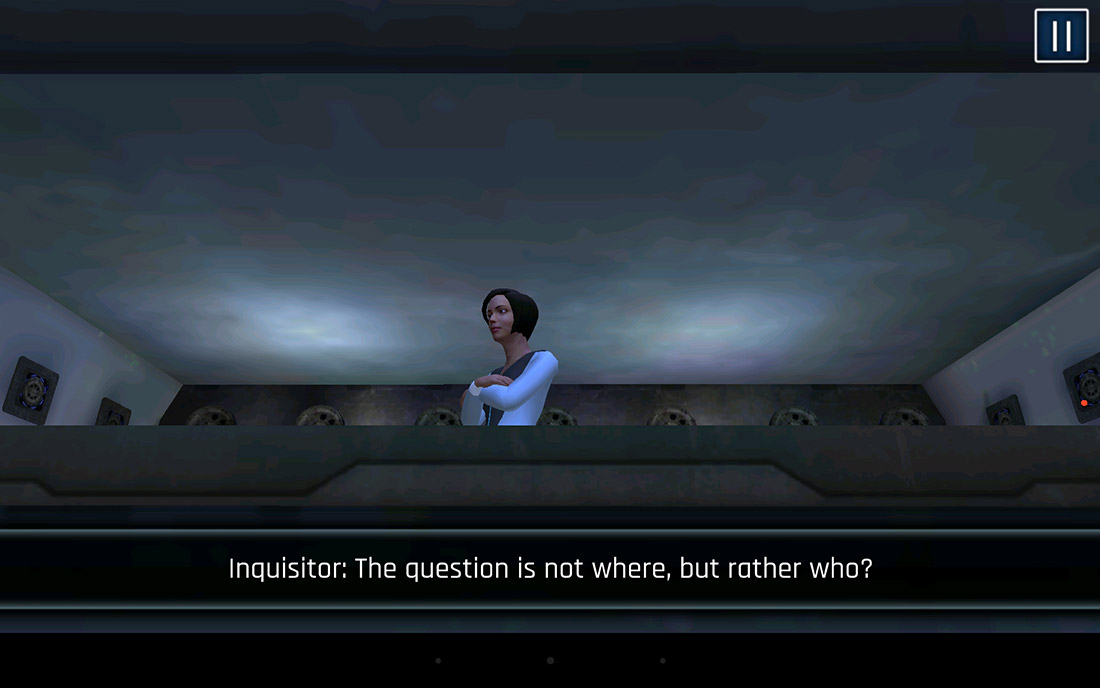 As I mentioned before, the game play is puzzle heavy, with no action to speak of. As the story progresses, there are little issues that crop up, that include puzzles for the player to solve. For example, in the early going Kole is asked to confirm his identity on one of the big screens, and this is indicated by a glowing white dot with a circle around it. After the player selects the screen (by tapping on the dot), a series of numbers shows up beneath Kole’s barcode, that indicates a numeric pattern with one of the numerals missing from the sequence. With the player being Kole, it is incumbent upon the player to fill in the missing number that Kole would know. Once that is accomplished, the narrative continues until Kole hits the next puzzle. They come in various forms, be they numeric pattern, letter pattern, taking a Scrabble-like list of letters and rearranging them to form the correct word, or out right filling in the blank; more often than not, these puzzles are found on affidavits and bios that were redacted or falsified in some way and Kole is correcting it. All the puzzles have a hint button (for which I was grateful as math isn’t my strong suit) and tapping it will darken a letter or number that isn’t part of the answer in some cases, and fill in a letter in others. It then takes another thirty-ish seconds for the button to reset and be used again on that same puzzle. This allows (forces?) the player to think about the problem at hand instead of just hammering the hint button to blow through the puzzles. 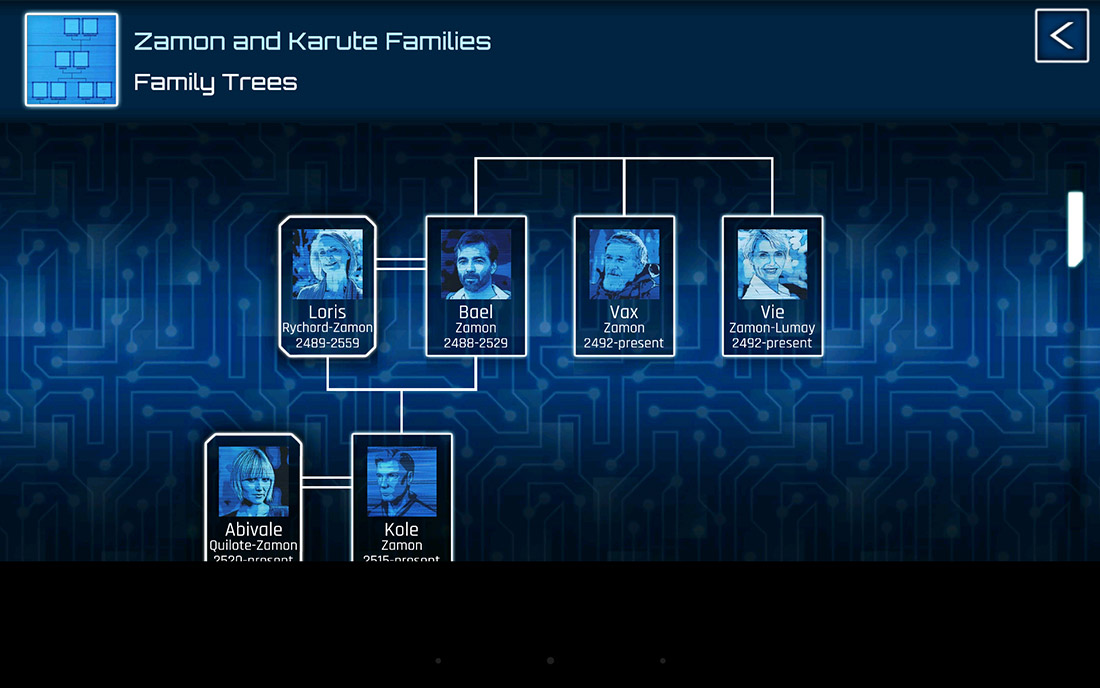 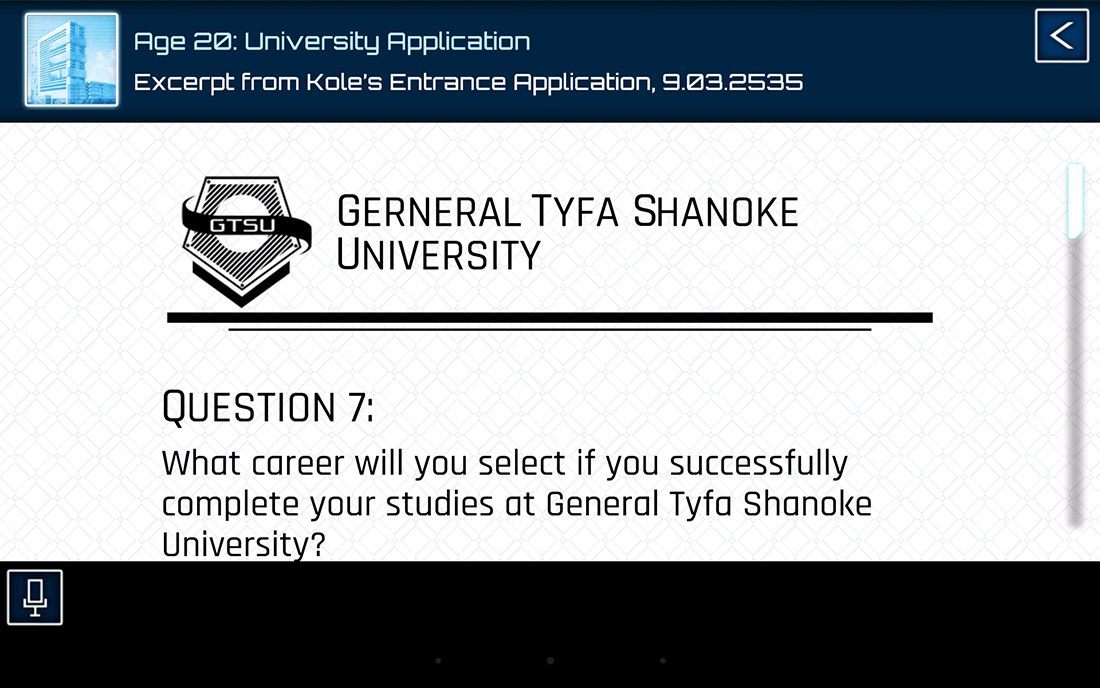 Most of the time, players will have already read the answer in some previously received document. The trick is staying focused when you read something, because you never know what will be needed later. Needed info will range from someone’s date of birth to where an event had previously played out. The devs did a solid job using a cross section of various types of data, and making all of the data types matter in one way or another; in the end, you’ll never know what you’ll need for an upcoming puzzle. The game is played almost entirely within the chambers of the Rewind, so there’s not much for visual variety, but considering the focus is on parsing evidence, that’s OK. The controls are very simplistic. To move around the room, players can drag their finger indiscriminately to move in the point of view, then either single tap to walk in the direction the camera is facing, or double tap to run. There are only two buttons on the screen, each in an upper corner. On the right is the pause menu, on the left is an arrow that opens up the screens that contain the affidavits and bios that Kole collects through out the game. There’s also a set of family trees, to help keep whom is who strait.

What graphics there are looked sharp on my Shield Tablet. The few characters in the game looked a touch on the simple side, but nothing to detract from the overall experience, especially since everything else looked quite good and handled smoothly. I didn’t notice any lag, and more than once noticed nice finishing touches on the visual side. For example, on one of the documents that Kole inspected, I could see easily the texture of the paper that was used to print on. Very nice. While the game recommends using headphones during play, I didn’t notice any significant degradation to the quality of gameplay when I didn’t use them, but it didn’t hurt either when dialogue was happening. As for the soundtrack, it was used very subtly. It reminded me of what you might expect to hear in a drama, so it was fitting in that regard. 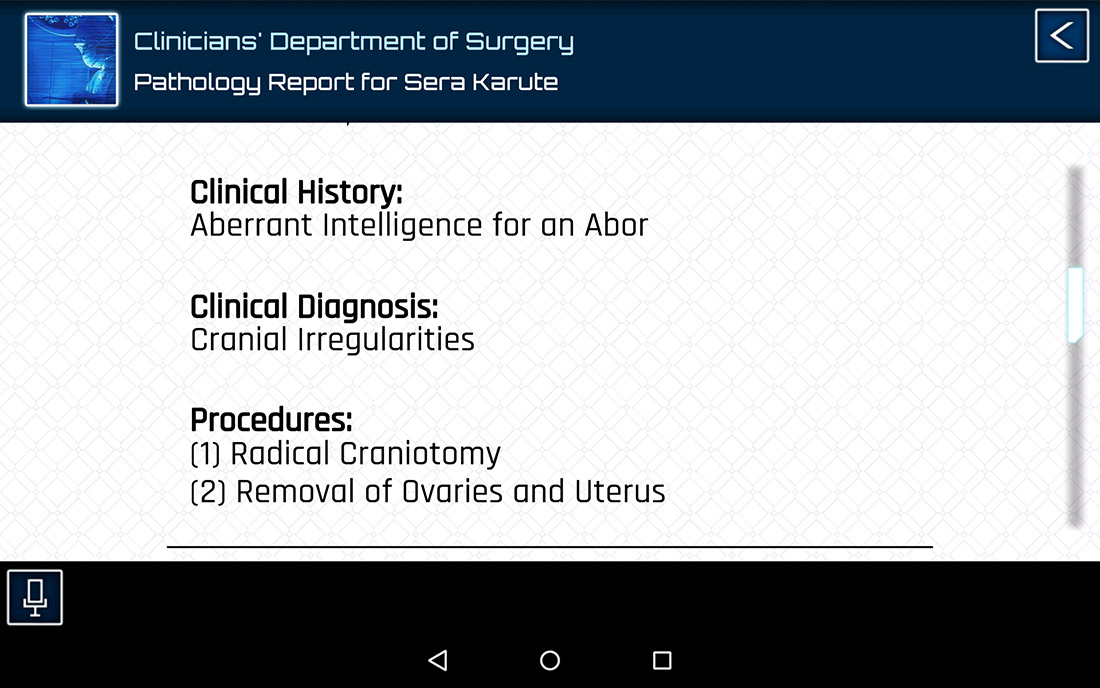 There’s only a single save file in Rewind, but with no deaths, shops, crafting, ammo, bosses, or life meters to manage, previous save points are unnecessary as Kole retains all the documents he acquires throughout the game’s progress; everything you gain is available just about all the time, and there’s no limit to how many times a puzzle can be attempted. What’s odd about the game’s saving though, is that players can’t choose when to do it. Players simply exit the game, and are restarted at some recent save point that USUALLY coincides with the completion of the latest puzzle. Not a major gripe, but worth but worth noting nonetheless. So players can continue or restart, as often ad desired.

There’s no achievements, awards, or even Google Play Games integration into Rewind. It’s the puzzles and the player. My only real complaint is how abruptly the game ended. The Google Play page didn’t indicate anything about it being part of an episodic release schedule, but ending how it did leaves me wondering about it nonetheless. In the end, for the $1.99 they’re currently asking, it’s not bad if you’re into political games, conspiracies, and the like. Link: