Yesterday we reported on Blizzard who had begun teasing a new game mode for their popular TCG title Hearthstone. Well before a lot of guesses to what that game mode actually is could happen, Blizzard has removed the curtain to unveil Tavern Brawl, which is what the new game mode will be.

So what exactly is Tavern Brawl? Well this new game mode is a sort of custom ruleset where each week players will be shoved into the ring against another player like usual, with the match containing ‘unique and exciting rules’ that players will have to deal with. This will change on a week by week basis, so one week “might feature preset decks, while another week could have you crafting a brand new Tavern Brawl deck following specific guidelines, while others might offer buffs to specific minion types“. In other words, you have no idea until that week begins what ruleset you will have to abide by during that week.

Tavern Brawl will be accessible on the main menu at the bottom of the four game mode spots. So this is confirmed as the new game mode that Blizzard was teasing yesterday. However, before you can even enter Tavern Brawl, your hero that you will be wanting to use must be at least level 20, so only experienced players will be playing this game mode. 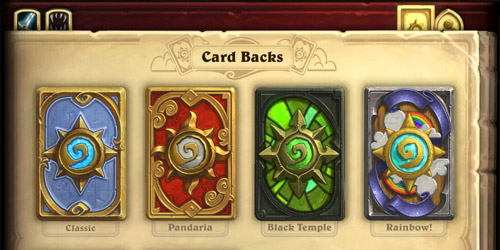 Card Back in the Collection Manager

So when will this be arriving? Blizzard has Tavern Brawl pegged as showing up in Hearthstone mid-June and will arrive as an update patch. This patch will bring a few additional changes to Hearthstone as well, including the upcoming hero cosmetic upgrades (so far one has been announced, but there will be a total of three to start) and the Collection Manager will be expanding what can be done in it as well. Players will be able to customize their decks with each one having their own card back from the card backs you’ve earned since the time you’ve been playing.

We will post an update once this update arrives, which will more than likely happen either during, or just after, E3 2015.