Anomaly 2 is a tower assault game from 11-Bit studios. This is the middle game of a trilogy, and seems to really push the boundaries for what tower assault can be, as a genre. My experience with the game was a solid one, with very few flaws. So let us dive into this review shall we?

The back story for the game is that aliens have invaded earth. Once here, they set up something that humanity referred to as the Anomaly. It sits in the Antarctic. While there, it began to monkey with the Earth’s climate, causing most of the world to freeze over, while aggressively warming the southern most portions. Setting aside how that fits into the story, it creates two divergent settings for gameplay, tundra and jungle. The story for Anomaly 2 picks up where the first one left off, in the near future with humanity continuing its struggle against the aliens. Players assume the role of a military officer named Lynx, who is part of a convoy called Yukon. Lynx spends a bit of time getting up to speed, before being given some command, coming in the form of missions that assault the enemy. The alien forces are strictly mechanical in nature, as they are machines sent ahead of the actual aliens, reminding me of the Matrix with the combat being between man and machine. In short, the machines have been planted all over the place (as towers), and humanity is navigating them to reach the Anomaly (assault on the towers). 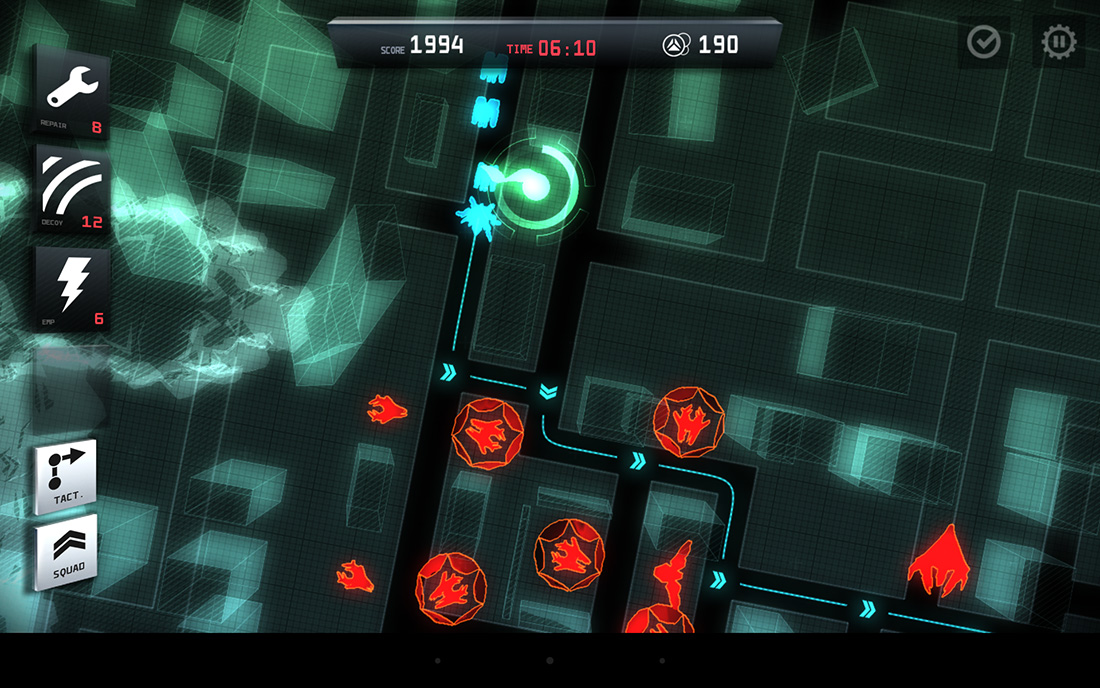 11-Bit really put some thought into the story, as there are a few characters (the most prominent being your commanding officer and a rescued scientist) that will speak during the mission prep, as well as during the mission itself to provide narrative, and even dramatic tension as they enter disagreements about how best to handle the problem at hand. For what these characters bring, with still shots of their faces and solid voice acting behind them, they do their job well. Each had represents a distinct and competing point of view, and the conflict between military and scientific perspectives (with the former being total destruction of the enemy, and the latter wanting to pull back from going that far to advance humanity) goes a long way in filling out the game. It’s not difficult to find yourself sympathetic to one or the other side.

The gameplay is straightforward (get beyond the towers without dying, as a rule), though there are added wrinkles to make the fourteen single player missions more than just a rinse-and-repeat affair. The first couple of missions, for example, are training missions that are played out in a simulator. And in a moment of cleverness, the simulation gets interrupted by actual combat, thus “rushing” Lynx into duty. Other missions will include objectives such as getting certain units to the end of the level without dying, or destroying certain towers. Another wrinkle to this game is that the player has a large amount of control in deciding what path to take. The objectives are typically given at the start of the mission, and the player can choose or update their path at any point, go in just about any direction, and do so for any reason. And the maps for each level are sizable, and often complex, so there’s no strait line from point A to point B. 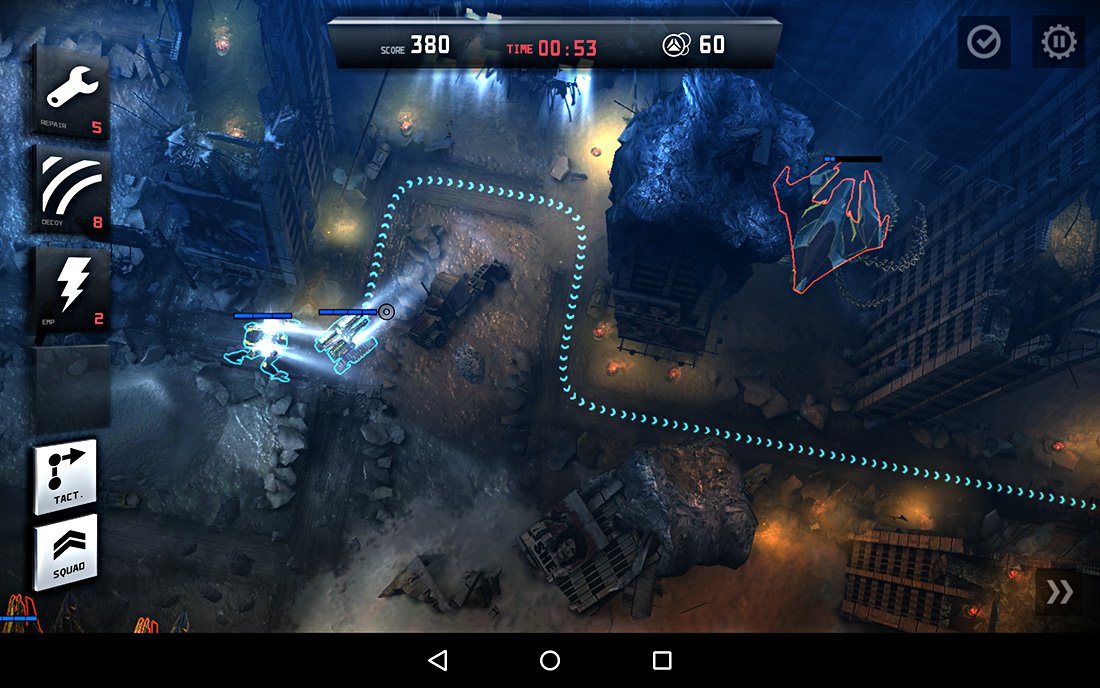 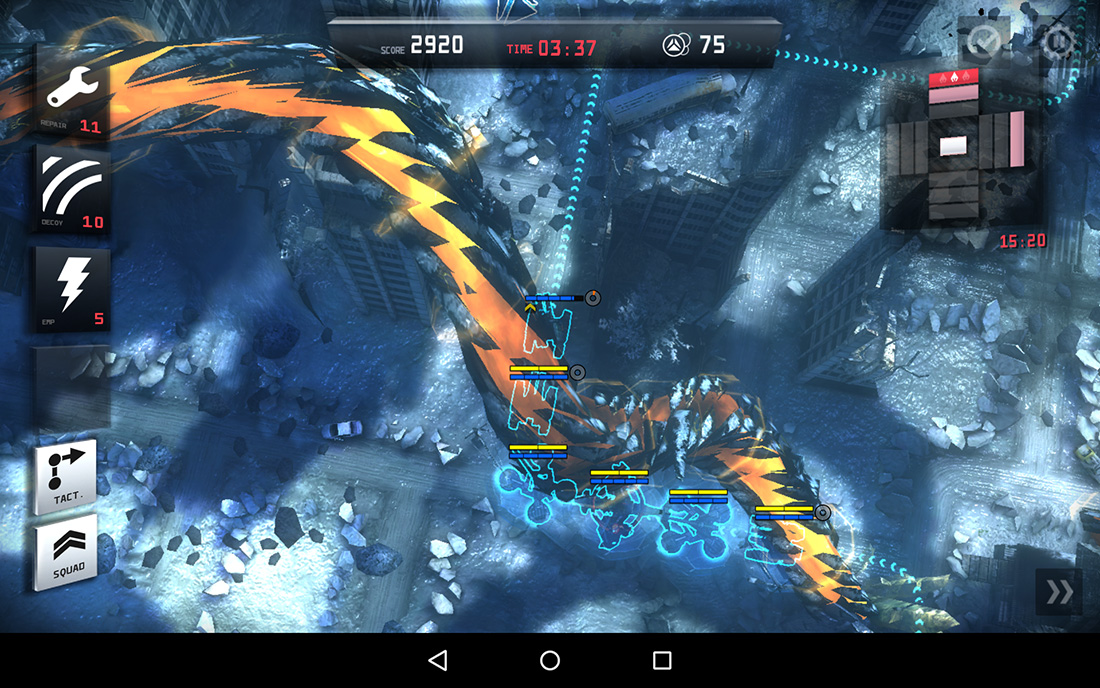 The button layouts are conducive to that type of “on the fly” decision making. Most of what’s pertinent to the gameplay is down the left-hand side. There are the various power ups that players can use; each mission is begun with a small amount, and more are picked up as drops after enemy towers are destroyed. There are four of them: health regeneration for the units in the convoy, decoy that causes enemy towers to fire at it instead of the convoy, an EMP that powers the towers down, and a target that draws the convoys fire to the tower of the  player’s choosing. Players simply select the desired boost, and then tap the spot on the screen where it is to be used, all done in real time. The other buttons on that side of the screen are to change the path taken, and to swap units in or out of the convoy. Born of these buttons pause the game when used, with the former pulling up the simulator screen and allows players to re-order their path by tapping on the various intersections. Again, there’s really no limit to what, where, and when the path taken is re-ordered. This is accomplished by tapping on an intersection, which changes direction the path will take, with each tap cycling through to the next option available. The other button is for controlling what is in the player convoy.

The maximum size for a given convoy is six. Each of the five different units costs a certain amount, and (newly introduced in this game), can morph into a secondary unit (a la transformers) with an often complimentary function. For example, the base tank players begin the game with can morph into a Mech Warrior styled walker, that has two flame throwers, each firing to an opposing side but having a shorter range, whereas the original tank mode has longer range, but only fires in a single direction at one time. The morphing is accomplished by double tapping on a unit, and can be done on a per unit basis. Cash is acquired by both killing enemies, and as well as drops found in the game. This is then used to purchase new units at the start, upgrade them while in the field, or replace them as they are destroyed in the field. Players also have the option to sell them back at full value if they’re in good shape, or at a prorated loss if they’re in damaged condition at the time of sale. 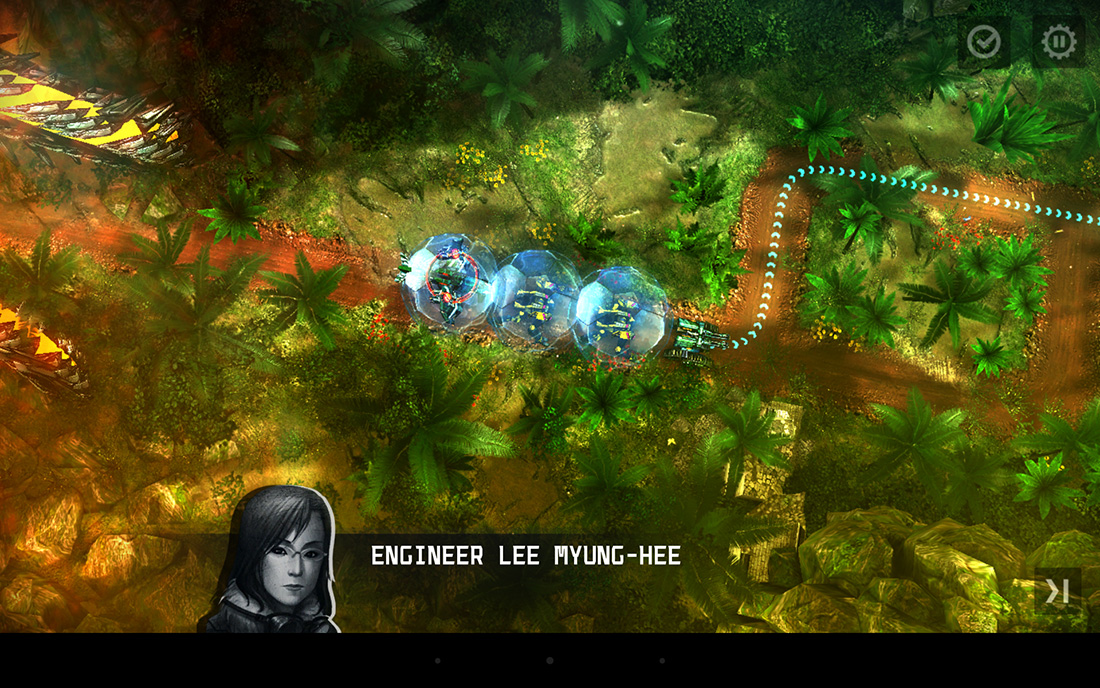 Both buying and selling can be done at any point (barring the times when the narrative restricts it), and thus allows a significant amount of flexibility in how a player would choose to approach not only a given mission, but a particular part of that mission. Need more power-ups for health to be dropped? Sell off a unit if you are already at six in your convoy, then purchase the unit that ups the frequency of your desired power up.  Sell it back when you have ample stocks, and purchase a different unit to handle the new scenario you’ve since traveled into. And again, all the units can be upgraded by paying an increasing cost, that provides a boost to attack and defense. So if you have cash to burn, and you’re already at six units, you can opt to boost your units, or sit on your reserves to afford replacements…or upgrade some and hold back on others. Your call.

The soundtrack for the game was action oriented. While it was nothing I was humming later, it worked for the action in the game. The game has both single and multiplayer options. The single player campaign has a little over a dozen missions, with the final one forcing the player to choose an ending. The player is receiving conflicting orders, and has to choose which one to comply with. With the multiplayer facet, players can look up friends via the games Google Play Games integration, or let the game find them a random opponent.

In multiplayer, one side plays the convoy (the same as in single player). But the other side gets to play as the towers, both in placing them (with restrictions for balance), as well as power ups unique to the enemy, and see who comes out on top. Saving your progress is simple. There are save points marked on the map, that are activated when the convoy passes by. Every time your convoy is wiped out (or any other loss condition is met), play can resume from that point. Unfortunately, this load point only applies to while the game is being played. When the game is loaded fresh, players will only resume from the start of the last level played. So as much as I enjoyed playing the game, I quickly realized that this wasn’t a game to “pick-up-and-play” in ten and twenty minute bursts. If I couldn’t anticipate finishing a level, I would either skip playing, or make sure I didn’t run any other apps that force the OS to close out the game to free up the RAM, until I could resume it to finish. Definite bummer at times. 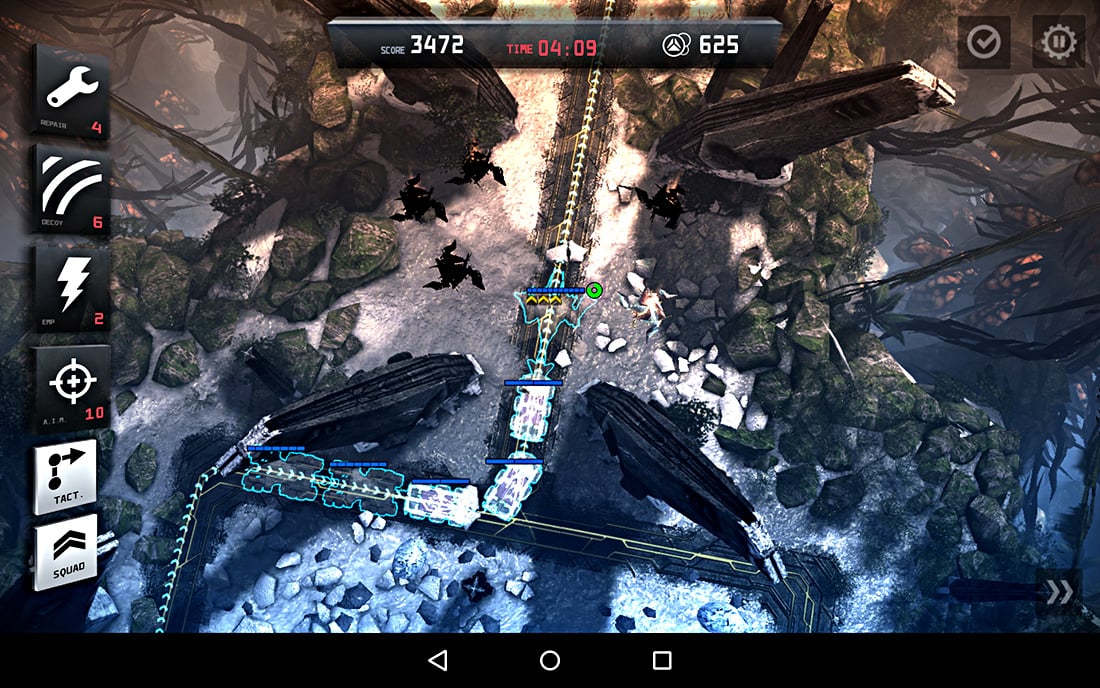 There’s only the one save file, but given Anomaly 2’s linear nature, one user won’t need any more than that. Also, the maps for each level grow in both size and complexity. And while this adds to a solid difficulty curve (along with adding new enemy and playable units as the game goes on), there is no way to zoom out to get a bird’s eye view. Players are forced to pan around to search for objectives, from an up close and personal perspective. And the bigger maps make that cumbersome. Lastly, there were a couple of instances where the audio cut out on me, during the early levels of the game. A restart of the game cured it every time.

Despite the flaws mentioned at the end, I can’t recommend this game enough. The story works, the graphics looked sharp on my Shield tablet, and the game is pretty darned complete. If you appreciate tower games, sci-fi, and/or military combat, you can’t lose by playing this game.