Meltdown Review: Not much to it, but still a lot of fun

Meltdown is a top down shooter from Bullypix. The gameplay is simplistic, the story is nearly non-existent, and the levels are repetitive. With all that being said, the game was a total blast, and I looked forward to playing any time I wasn’t. It’s not without flaws, just having spelled out a few of them. Yet, none of those really mattered to me, nor dissuaded me from enjoying the game.

The game is set in outer space, where players assume the role of Zed, who has been hired to shut down and destroy a particular space ship whose AI has gone awry, causing all of the machinery to go berserk. There are thirty floors in the ship in question, with each one needing to be progressed though to get to the main reactor, to destroy the ship. That’s really all there was for a story. No narration or cut scenes, inter-stitched between levels, nor during them at any point, once the prologue concluded. This makes for a fairly bare bones approach, but the point of the game is really the action. Being a mercenary is really just a pretense to blow stuff up. 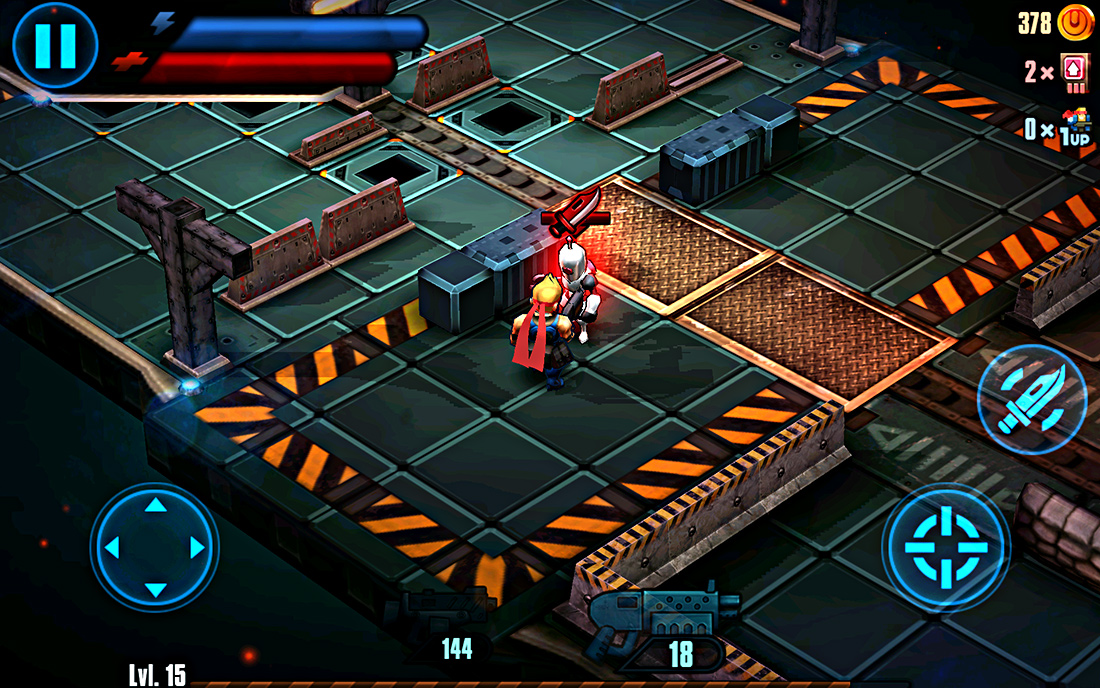 As you begin a given level, your character is on a descending platform, which picks up where the previous level leaves off. The levels are laid out diagonally, with the player being given an isometric point of view. So you will always be heading up, in a general sense, but it will be up and to the left, or up and to the right. The levels all have the same look a feel, comprised of the following: a platform that floats in outer space (no hull, or other ship specific location), various obstacles that must be navigated around and will double as cover, spawning enemies, and a handful of different drops. Each level is “thrown together” by the game,  so no two levels are alike in terms to their individual layout, but they’re all comprised of the same components. So despite the specific path (or paths) to the end being unique to each level, a given level’s uniqueness was lost on me in the early going, given the lack of visual variety. Basically, it’s a question of how long you will go up and to the left, before heading up and to the right, before switching back.

Despite there being no walls, and the appearance of pitfalls, my character was unable to fall through a hole or over a ledge. While this looks out of place when you first encounter it, it was nice to know that I didn’t need to worry about falling off in a firefight. The flooring for the levels all have a military/industrial look and feel to them, with various plates that rise vertically from the floor, and return to a position that’s flush with the floor, as well as multiple types of fixed barriers, such as the sand bags from World War II, metallic piping, air vents, and more. Enemies are all robotic, and spawn from certain areas as you approach them. 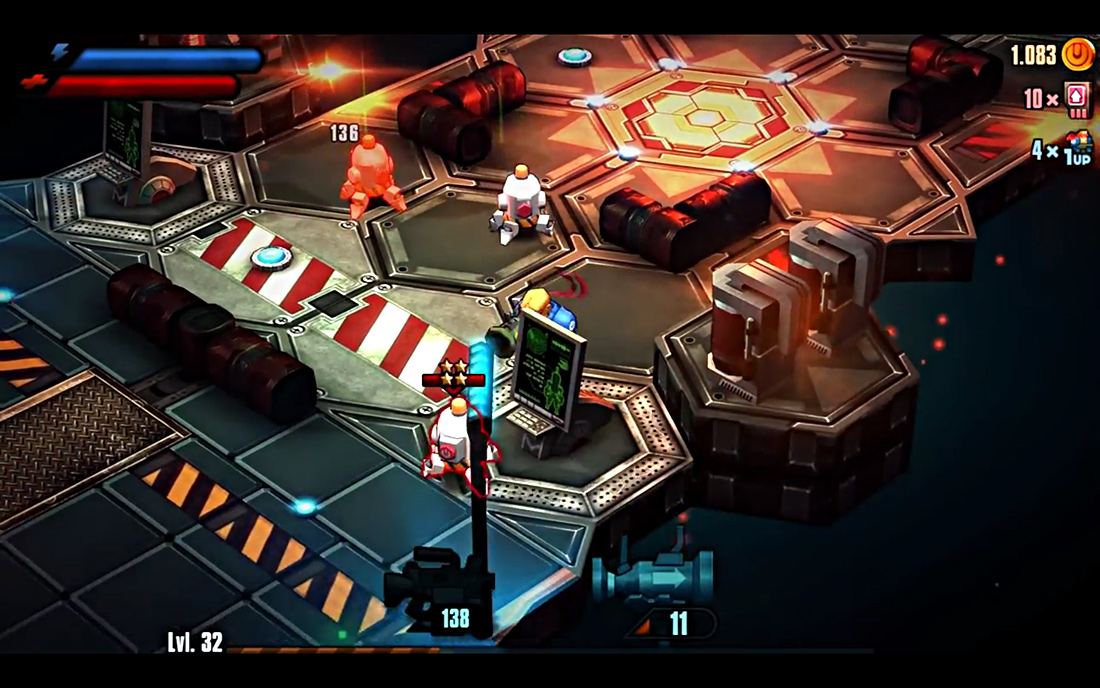 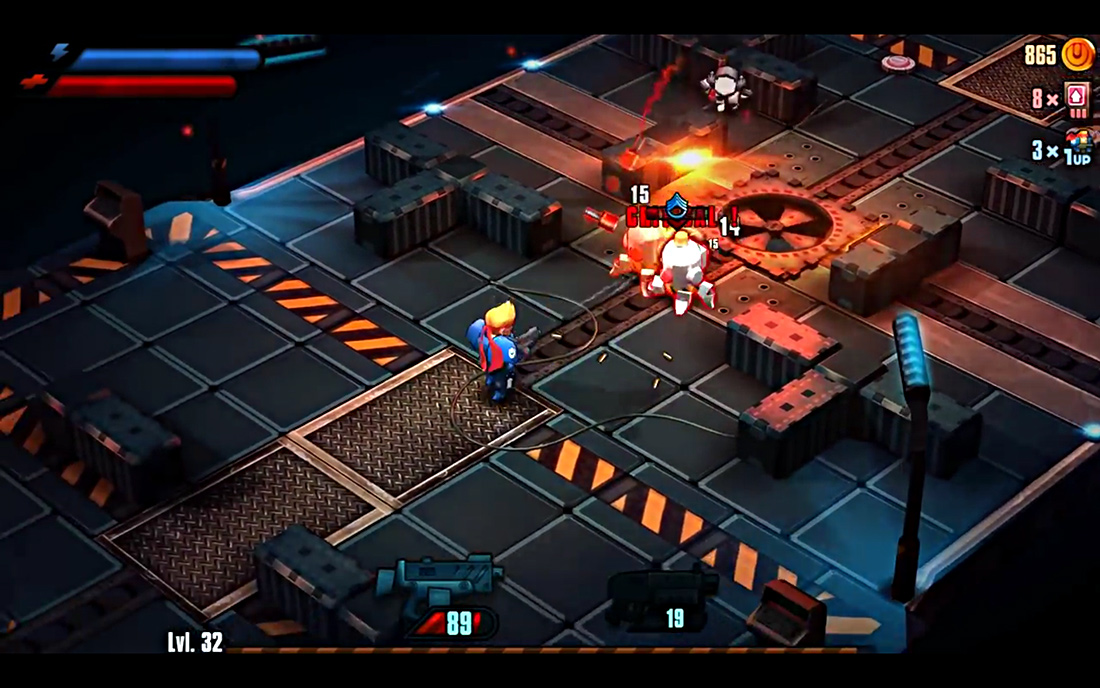 As the game progresses, both the difficulty of the enemies, as well as the variety, increase appropriately. Towards the end of the game, I noticed a decent variety had built up, ranging from robots with sniper rifles, assault rifles, wrenches used as clubs, machine gun and rocket launching nests, as well as mini-tanks, bots, and mines that explode when close to my character. When there are a few different types working in concert, it can prove quite the challenge. Once the enemies have been destroyed, I would simply continue through the level until more spawned, or the level was finished. The game enabled me to walk up to a barrier, and immediately duck down to take cover being it. This is one of the handful of features that the game uses as default, so there are no buttons to toggle this feature with, and that keeps things simple for touch screens. When ducked, players need only to attack to rise from cover, shoot, and return to cover when finished or reloading; walking away from the cover would return my character to a normal position, and I always had the option to dive over it, should I feel the need. To round out the display, there is a shield meter and health meter as well. The who thing is simple, and overall it works.

There are only a few controls on the screen for players to be concerned with. In the upper left, is a pause button that brings up the menu quit or monkey with settings. On the left, I had a directional pad, but also had the choice to tap on the screen to move my player to a location, as well as use a controller. At the bottom are my two firearms, and my character fires whichever of the two I select (provided it has ammo). On the right, there are two buttons. One is dedicated to attacking with whatever weapon is in hand. 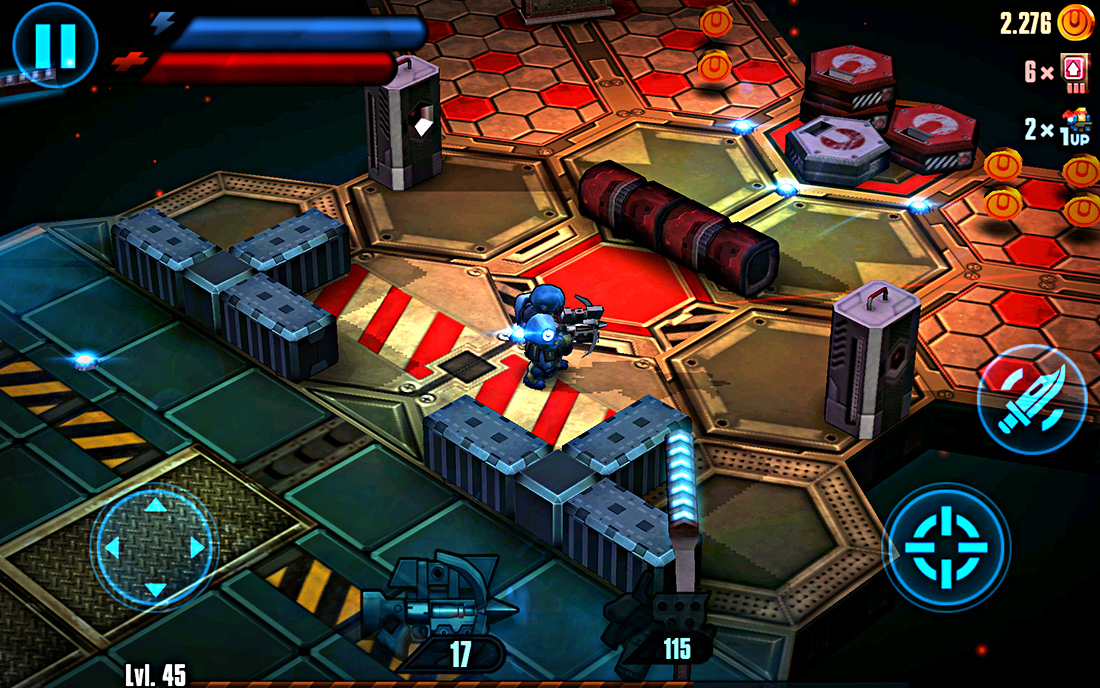 The other button is a smart toggle. When walking, tapping it causes my character to perform a diving somersault (useful in dodging fire, escaping close and unwanted encounters, and avoiding mines). When standing still or near an enemy or crate, the dive button switches to become a melee button, allowing me to get “up close and personal” with my electro-mechanical prey. This button was trickier to get the hang of, as there were times I would duck and roll when I wanted to swing my weapon, most of the time it worked without a hitch. Of there thirty levels in the game, there are a few different types of endings one can have, which are touched on in varying frequency. Some levels, such as the first one, simply expect you to make it to the end. Others have one of a few types of bosses, ranging from a hulking behemoth to a pair of extra difficult enemies, to a large and armed barricade, akin to the Maginot line, or a set number of waves of enemies to be fought off. Once a level is completed, or the very next level is unlocked for play, though any previously completed level can be replayed again.

Character and weapon upgrades are fairly strait forward. Destroying enemies netted me XP, which leveled me up. Gold was also dropped, which is used to purchase weapons and armor (I’ll touch on that in a minute), as well as a few other drops, which included drops that would replenish ammo, health, or shields, a timed bonus to double all damage dealt by the player, mystery boxes that could contain cash/XP/1ups/upgrade chips for weapons and armor/nothing at all, and a miniature nuke that would damage and knock back any enemies in the nearby vicinity when the player touches it. Of the weapons and armor, there are nine firearms and four melee weapons that players can purchase, beyond the ones they begin the game with. All of the firearms are upgradeable, with each having two tracks with each track having three upgrades on a given track taking three stars each, allowing players to mix how they want to spend the nine stars on a given firearm, and each upgrade requiring gold and often a number of the upgrade chips that are dropped or found in the mystery boxes that are dropped. 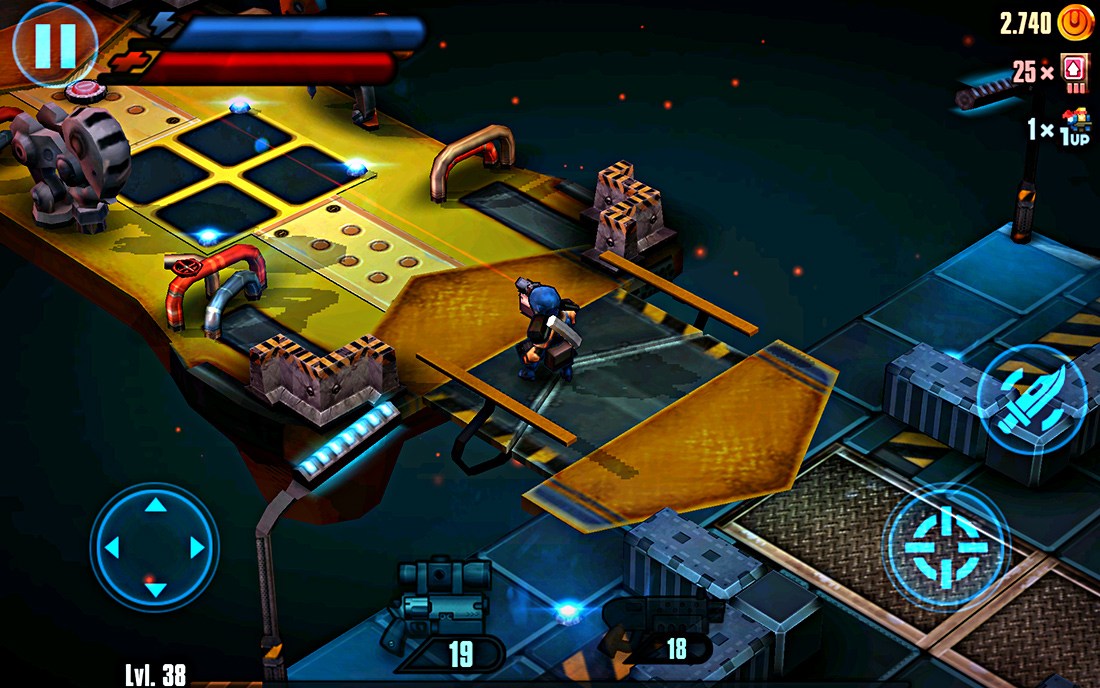 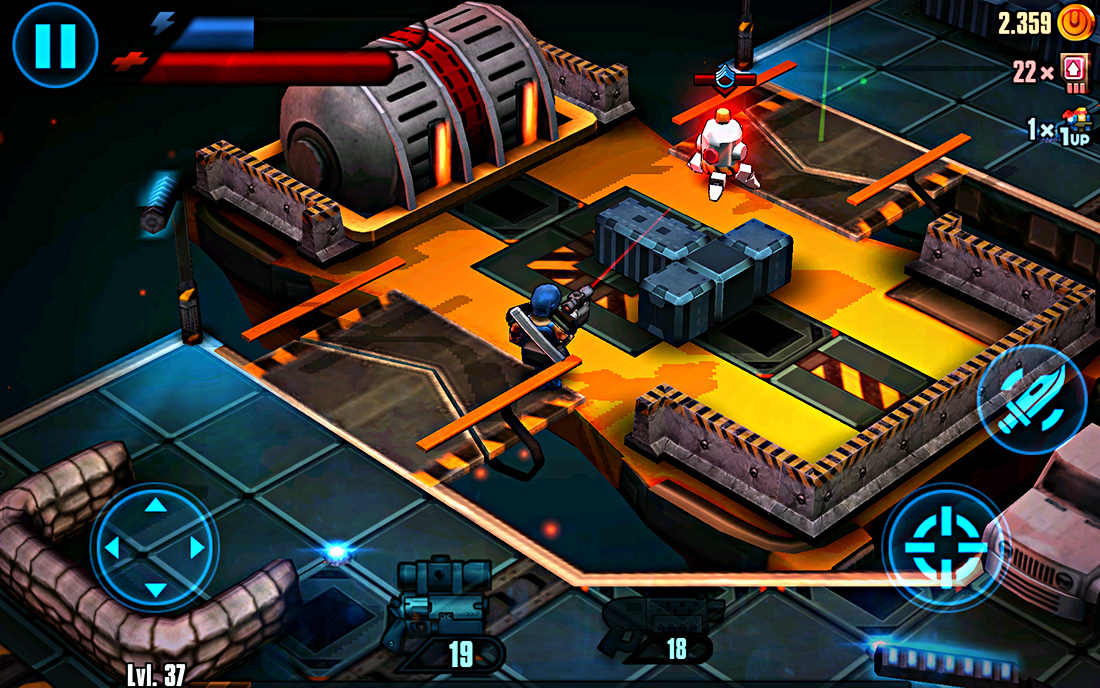 Armor and other equipment (such as an eye patch or mask) was upgraded much the same way. Both types can have their stars reset for reallocation at any time. Purchasing weapons and armor always requires gold recovered from combat, but other requirements were sometimes included such as maxing out the upgrades on an earlier weapon or piece of equipment, or being at a certain character level. I never knew how close or far I was from the next level though, as stat-specific counters are never visible. So, I would simply grind away until I leveled up. And the same went for both health and shields. I never knew exactly how much I had at any point, I only had the meter to go on.

So while I could net a +10 bonus to health or shields by equipping a specific piece of armor, I never knew what the new total was, nor did the meters change in length. Personally, I like to specifically quantify my RPG elements within a given game. This felt a bit like it was geared toward a more casual type of gamer than I would consider myself to be. So while I can’t necessarily fault Bullypix for making such a decision, it was a frustrating point for me nonetheless. Be that as it may, whenever I did level up, I was awarded a star to assign to one of three tracks. There was a health-centric track, and a pair of weapon-cetric ones. Each of the tracks for my character contained six upgrades, requiring three stars each to unlock the next boost in that stat. The level cap is 55, so the idea is that eventually all of them will be filled in. Once those are all completed, the player has the option to enter “prestige mode”, where you can start over, but with a higher ceiling for weapons (ten stars to be allocated instead of nine), a bundle of cash, and access to things like the best armor in the game.

The game connects to the internet, though it’s not required. Every time I began a level, a server was created. Other players could then look for levels being actively played, and jump in; players can turn off their internet access, toggle their inline/offline status to prevent this, or secure it with a password to allow only friends. This is feature is desirable, was the enemies both multiply and become tougher, but in turn offer more experience, gold, and more frequent drops. Players can select any screen name that they’d desire, and enter it before commencing play. 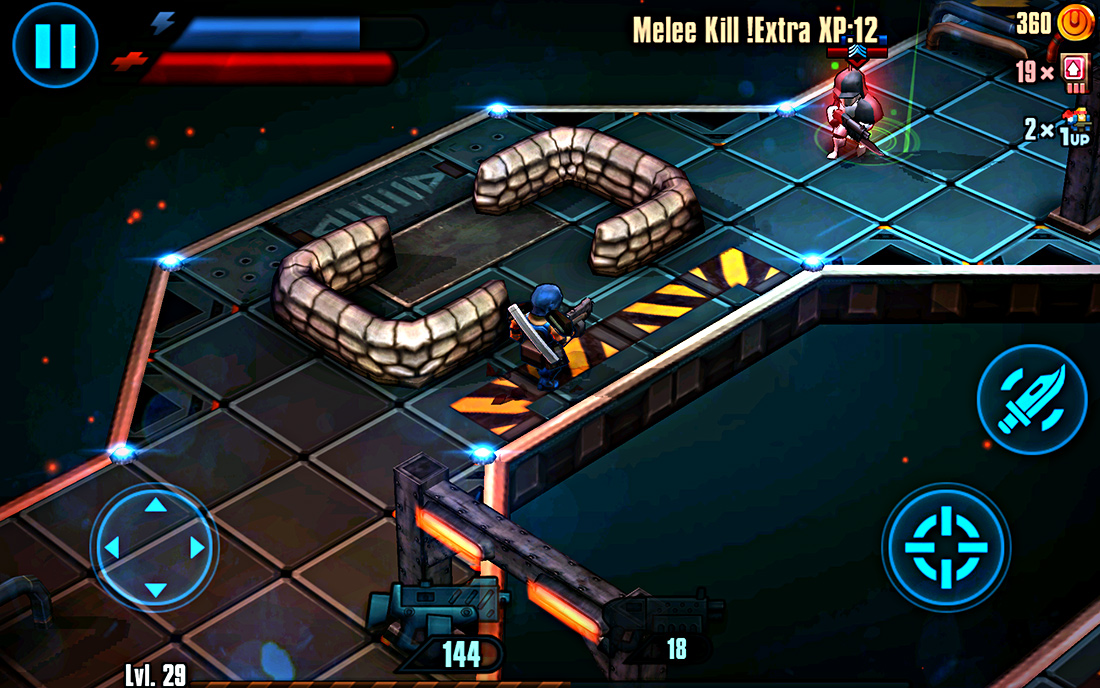 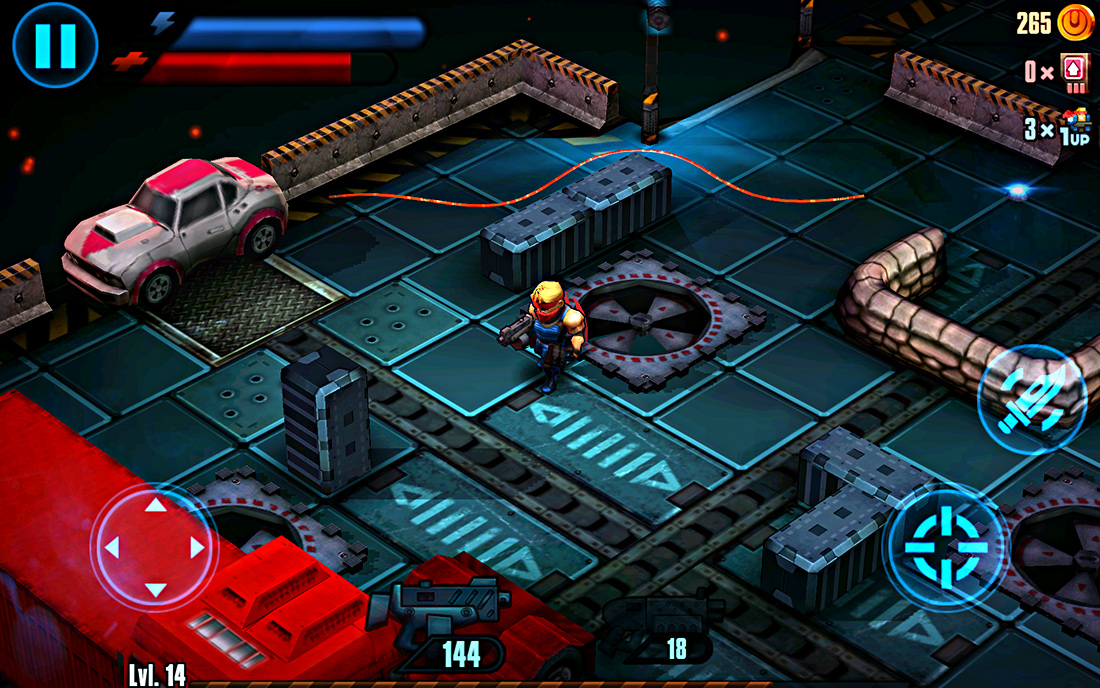 Unfortunately, the game doesn’t retain this in any fashion, so every time that I logged in, I had to remember to go into the game’s settings to enter it in again. It would be nice for the game to remember this, and perhaps prompt players to take advantage of the feature; as it stands now, half of all players I encountered didn’t know (or bother), and <unknown> was over the head of each of those characters. There is also a local multiplayer option, called Arcade Mode, that takes up to four players. In order to play this though, controllers are required. To round out the other options, there’s also Quick Play (a random generated level based on your level), Wave Attack (see how many waves of enemies you can survive), and Death Match (a PvP arena).

The soundtrack for the game was comprised of Dubstep and other Electronica. I found the soundtrack to be quite enjoyable, but I tend to enjoy a smattering of those styles every now and then. That being said, it was quite fitting for the action and visuals of the game, and didn’t take me out of it at all. There were several different songs, and each one would loop for its given level. I never got bored with listening to it. The graphics looked good on my Nvidia Shield Tablet. A touch cartoony, but in a good way. There were other nice little touches to the visuals, like lens flair showing up at certain points. On the whole though, this game is pretty bare bones. Yet, what it does, it does well. Given that there’s a free version, I can easily recommend taking a flyer on this, especially if you are into dungeon crawlers, third person shooters, and/or blowing up robots. If you like it enough, there’s always a premium version or IAPs for more.