Here’s what to expect when Minecraft: Pocket Edition version 0.12 arrives in the near future.

Many of the upcoming features for Minecraft: Pocket Edition version 0.12 were showcased on the newly announced Windows phone version of the game. However, even though they were shown off on a Windows phone, they will be identical on other mobile platforms as well.

While version 0.11 saw the introduction of potion effects to Minecraft: Pocket Edition, actual potions were not added to the game. That will be changing with version 0.12 as Potion will finally be introduced into the game. Since many of the ingredients for Potions happens to be found in the Nether, so Mojang will also be bringing that zone into the game with version 0.12. For those of you not familiar with what the Nether is, basically think of it as Hell in Minecraft. So there is a lot of lava to die in. 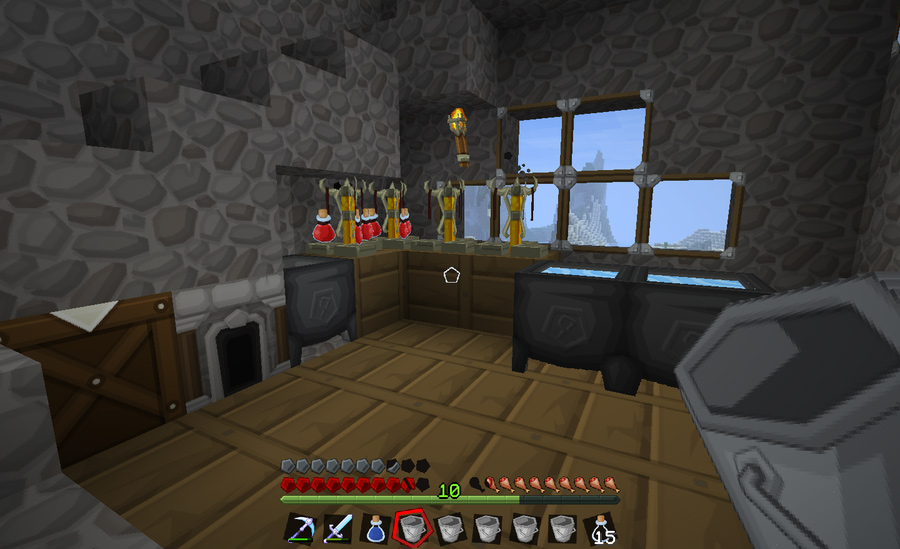 If accessing the Nether is the same as in the PC version, players will need to make a portal out of Obsidian block in order to gain entry into the Nether. Potions will be created the same way as in the PC version as well, so you’ll need your brewing stands to make your favorite potions. You can expect all the standard potion from the PC version to be added to Pocket Edition in version 0.12.

Not too far off from Potion brewing is Enchanting which will also be arriving in version 0.12. This allows players to add extra stats to their weapons, tools, and armor. In order to enchant an item, players will need an enchanting table as well as the appropriate amount of library bookcases (for full power enchanting) around your enchanting table. Once you have those built, you will need to make sure you’ve collected plenty of XP points as those are what you spend in order to enchant an item. 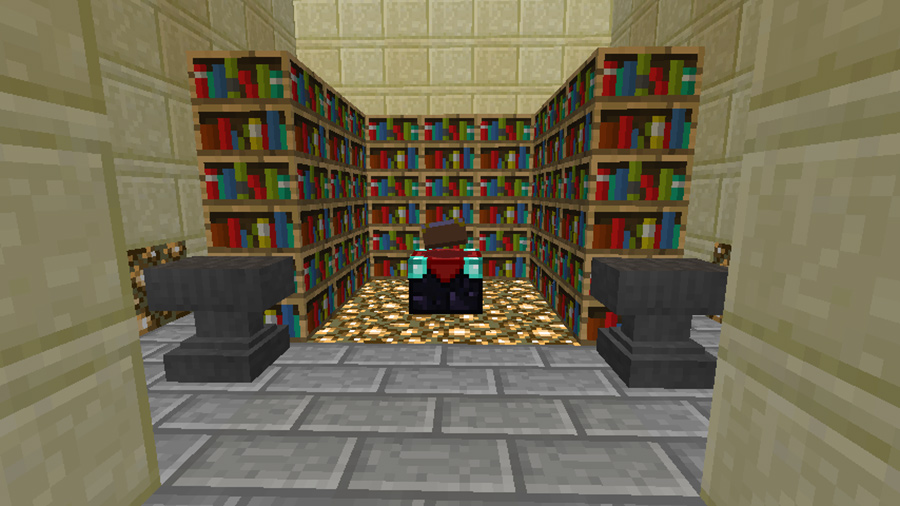 If it is identical to the PC version, you’ll have three options when you go to enchant an item. Each effect also has multiple levels of strength as well, with level 1 being the lowest. As for what enchants will be available when 0.12 arrives, that hasn’t been revealed yet but it is safe to assume that the more stand enchants will be available like Unbreaking, Fire and Speed to name a few.

Introduced some time ago in the PC version, Hunger will also be making its way to Pocket Edition as well. This will be a second bar in your UI, similar to the XP points bar, that tracks your current state of hunger. When you get too hungry, you will need to feed yourself. If you don’t have any food, and your bar gets empty, you’ll start to lose health until you either feed yourself or die.

New buttons will be added to the game for Sprinting and Sneaking around. Also the Jump button has been moved to a new location. The Auto-Jump feature currently in the game will now have the ability to be toggled on and off. As for the UI, version 0.12 will introduce a new method for mobile gamers to move around different parts of the User Interface (UI). According to Tommaso, who explained how it will work on Twitter, basically there will be a text file that has the UI layout code in it and players can alter said code to move around different aspects of their UI. This includes UI parts such as the XP bar, your control buttons, health hearts, etc etc 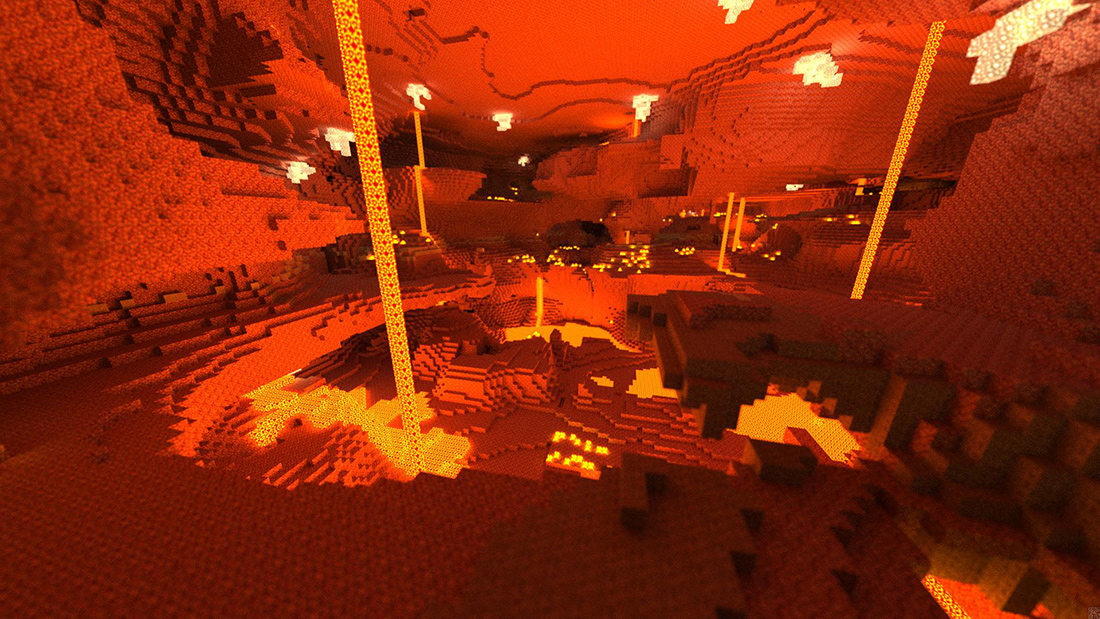 While current Minecraft: Pocket Edition players have had plenty of time to get used to the mobile style of the inventory, Mojang will be swapping it out for an inventory layout similar to what you would find in the PC version of Minecraft. This style of inventory will be for Survival Mode which means crafting won’t be as easy as it has been. You’ll need to start memorizing your recipes as well as all the new ones for Potions and so on.

No more tweaking of how the clouds and the Sun looks in Pocket Edition. Mojang has moved onto to bringing actual weather to the game. You will be able to go dancing in the rain or enjoy the snow soon when it starts to fall. If it has been snowing for awhile, the snow will also being to stack up.

Like most major update for Minecraft: Pocket Edition, version 0.12 will feature plenty of tweaks and enhancements to currently existing features. There will be new animations introduced with version 0.12, most of which revolves around fire, but certainly not limited to just that. TNT has a new animation when it explodes, and mobs on fire look better with enhanced partial effects. Slimes also have new animations when they jump around.

Actual music will finally be coming to Pocket Edition as well. So you now won’t have to play in the silence. Commands will also be arriving in version 0.12 but Mojang didn’t go into detail about what we can expect with those. Commands have been in Minecraft on PC for a long long time and generally let you do all kinds of things like fly around or walk super fast, and are inputted in a command line style. These are usually kept in Creative Mode, although Survival Mode does have some as well in the PC version. We will have to wait and see exactly what Pocket Edition gets in the way of commands.

A new dungeon design will be coming in version 0.12. This is also a feature that wasn’t expanded upon too much during Minecon 2015, only that a new design for dungeons is on the way.

As with most major updates, there is always the addition of new Mobs and new blocks to Minecraft: Pocket Edition and version 0.12 is no exception. With the addition of new items like Potions and a new zone, the Nether, this means new blocks and monsters to deal with. Iron Golems will be saying hello in version 0.12. These protect villagers from being harmed, whether by you or by mobs. Ocelots (big aggressive cats) will be spawning in Jungle Biomes in this update. Speaking of villagers, they will be able to turn into zombies in version 0.12 as well. Entering the Nether will have you greeted with all of those nasty mobs as well.

With the addition of Enchanting, Potions., and so on, players will now have the appropriate blocks available to them as well. This includes Enchanting tables, Brewing stands, Anvils for repairing gears, and flower pots. New Nether blocks include soul sand, Nether brick fences, and Nether quartz ore. You’ll also be able to collect and wear the heads of mobs you’ve killed.

With all of the new additions comes new items as well. There is the obvious Potions which you can brew as well as golden carrots, golden apples, enchanted golden apples, and so on. With the Nether you will be able to get Nether warts, a rabbit’s foot, Blaze rod and Blaze powder, Ghast tears, fermented spider eyes, and a bottle for enchanting.

While Redstone has been confirmed to be arriving for Minecraft: Pocket Edition this year, it may or may not make it into the 0.12 update. Redstone basically lets you create systems that use any type of circuitry. Everything some simple mechanics, like a row of blocks going up and down, to full-blown calculators and everything in between have been created with Redstone in the PC version of the game. The same will soon be true for Pocket Edition as well. It is just a matter of whether it arrives in 0.12 or a later update is all.

So there you have it, everything that was shown off during Minecon 2015 for the upcoming version 0.12 for Minecraft: Pocket Edition. Since version 0.11 was just recently released, don’t expect this version to be arriving this week or anything like that. The Windows phone version is slated for release on July 29th, 2015 which is supposed to be version 0.12. Mojang hasn’t announced as to whether or not Android and iOS will be updated at the same time as the Windows phone release. We will post an update once we know more about when version 0.12 will be arriving for Android.