Seville, Spain is the spot on the globe where the headquarters of Genera Games calls home. They have additional offices/studios around the world in Boston, Romania and Los Angeles. They recently released an exciting action-filled endless runner called Ramboat. It is a blast to play, and has plenty of missions to conquer. Think of Halfbrick Studios’ Jetpack Joyride, and you will have an idea of just how fun this game is to play.

The game is entitled Ramboat, but anyone familiar with the film series Rambo, starring Sylvester Stallone, which started in 1982, can look at this game with a sense of humor and appreciation. Rambo: First Blood the movie, was based on a book by David Morrell. In the movie, a troubled Vietnam War Veteran returns home, and is met with unfair treatment from a town sheriff. It is here that the film lore of Rambo begins. Eventually, that movie will lead to three others.

In Ramboat, the main character is Mambo, an adorably rendered, and neatly coiffed action superstar, that is waiting for you to take control of his speedy boat. Like Rambo, he dons a red bandanna tied around his head. If you enjoy action and endless runners, this game has it in spades. More on the spades part later in this review. 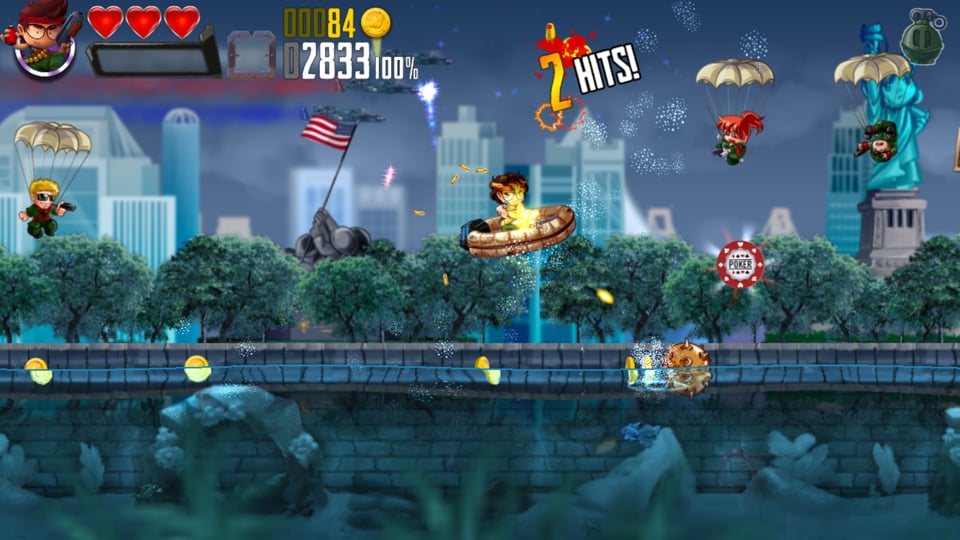 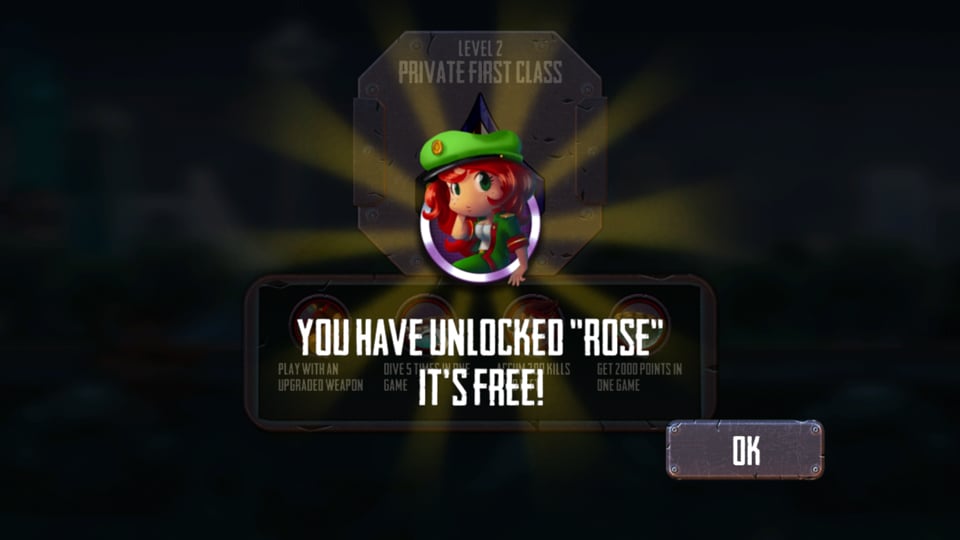 “Join Mambo and his crew in this action packed, arcade style, racing shooter and poker adventure! Jump, dive and dodge obstacles and enemy fire while reacing through a war zone on incredible vehicles and armed with sick weapons!” – Genera Games

Upon starting Ramboat, the first thing you notice, is how well-rendered the game is. The graphics are detailed and there is a lot, and I mean a lot, of action happening on the screen. Mambo starts off piloting a boat, and then as you level up, other vehicles are unlocked. The second vehicle that unlocked was a great white shark. An ode to Jaws the movie maybe? Anyway,  a large cadre of weapons and vehicles are available to you. This game is packed with things to do. You won’t easily get bored with this one.

Part of what makes Ramboat a great game are the controls. They work extremely well for mobile devices. You press one side of the screen to accelerate, and simply release when you want Mambo to slow down. Swiping up allows Mambo and your other characters to jump in the air. In an homage to great action sequences in films, and Max Payne I guess, the game goes into slow-motion, or bullet-time. I never tire of seeing this sequence. There is a fair amount of detail that has gone into implementing this small touch of brilliance. Your main character actually turns his/her head and body, as they shoot what is around them. It is pretty amazing to see in the game. Not that you control any of that sequence after you have swiped up, but it shows the level of artistry that is in the game. Swiping down allows you to dive under the water. You may not necessarily use that control a lot, but it helps when bullets and missiles are flying at you from above. 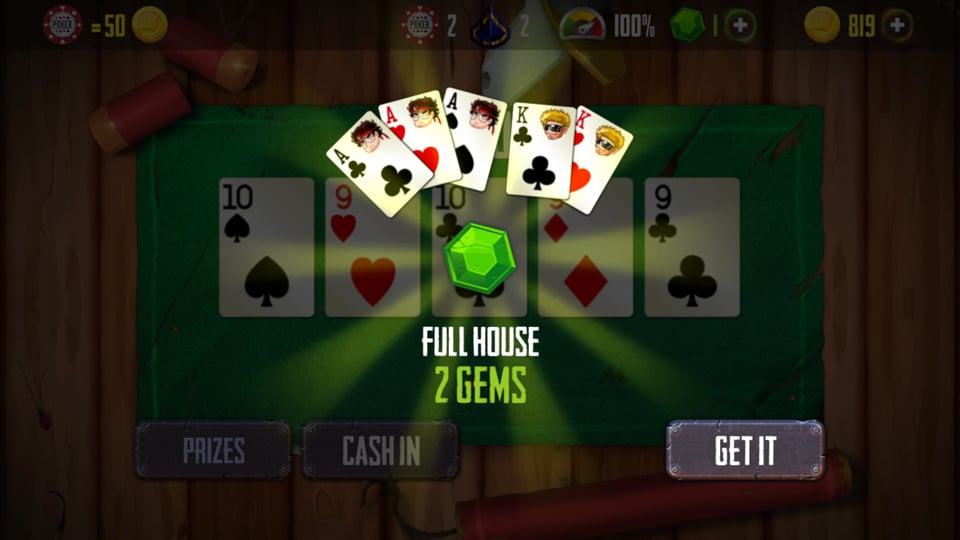 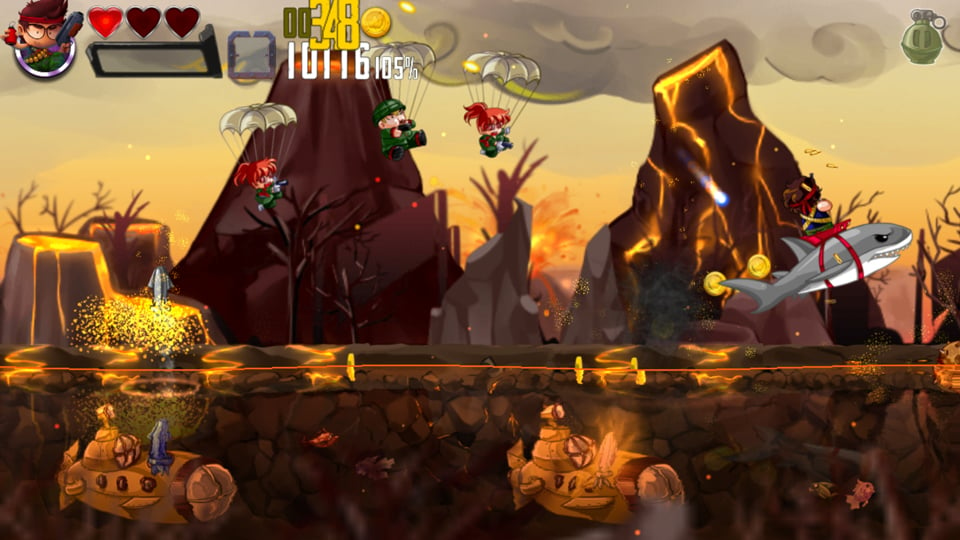 The action is coming at you from all sides. You have multiple paratroopers falling from the sky shooting at you, random planes flying by either dropping bombs, or trying to riddle your boat full of bullets. Beyond that, there are other boats ahead you shooting missiles, and dropping mines for you to shoot, or jump over. It gets chaotic really quickly in this game, and you will enjoy every minute of it.

You progress through different stages in the game. You start off in The Jungle, move to Independence Day, Bloody Sunset, Frosty and so on. Each stage looks amazing and it is easy to get caught up in the amazing art work that is part of the game. The stages, variety of missions, multiple weapons, and characters available to play, make Ramboat a game with endless possibilities.

In addition to the main action that takes center stage, you also have an opportunity to play poker. Let me be the first to say that I know absolutely nothing about poker. So, I can’t provide a lot of information in this area. However, as you are playing the game, random poker chips fall from the sky. Based on however many you catch, you are able to play that many rounds once you finish your game. If you win, you are awarded either new weapons, hearts (life), coins or so on. It is a nice add to the game, and if you know how to play poker, you can count on winning pretty easily. You also have the option of just playing the poker game, but it will cost you coins to do so. That isn’t  a problem because coins fall from the sky like rain.

This game has lots to do in it. There are a ton of missions. Completing the missions allows you to rank up. Each time you play, you are given four missions to complete. One mission may involve catching twenty-five fish, another may involve shooting down three airplanes in a game, or diving beneath the water five times. The variety of missions help keep the game play fresh, and it is always challenging to complete them in the midst of the volley of bullets and bombs. 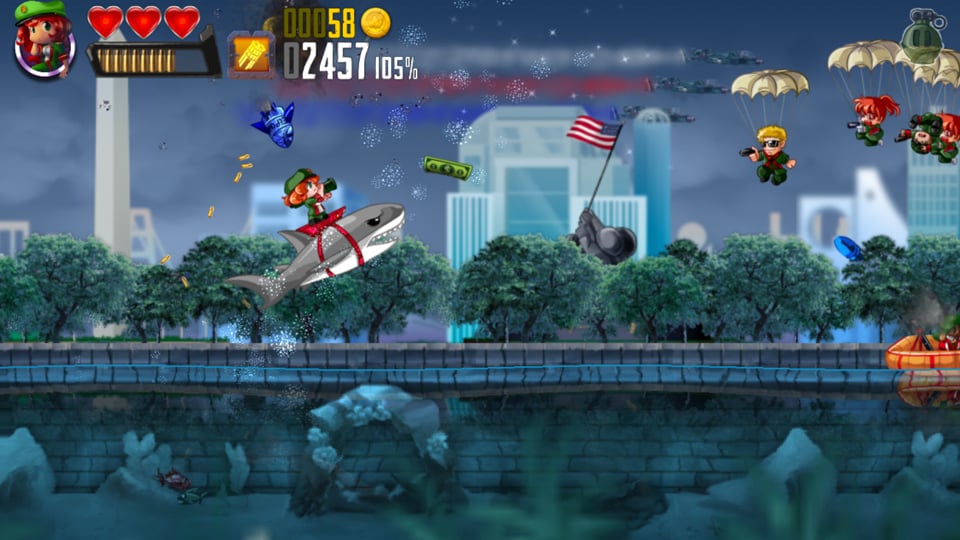 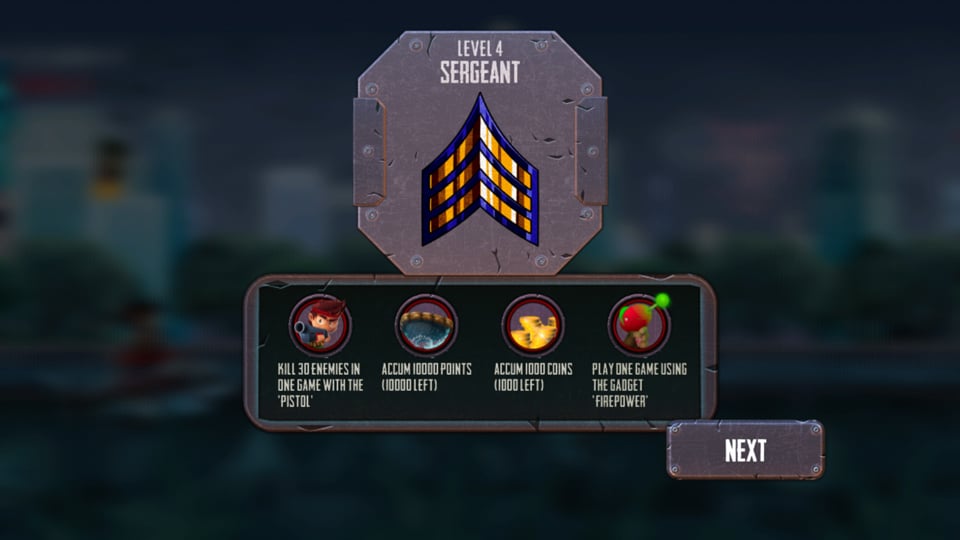 Ramboat is free to play. I mentioned Jetpack Joyride earlier. Yes, playing a free to play game does not have to mean the game is horrible, or that pay walls are inherently put in the game. Ramboat is free to play in the best possible way. Any purchase in the game will turn off the ads. In the game you collect coins, gems (it is more difficult to collect these.) and poker chips. Any of the in-game currency will allow you to buy new characters, vehicles or weapons. However, you can  get  those items the old-fashioned way by playing the game and completing missions. As you level up from a Private to Private First class and so on, you unlock new characters, vehicles and weapons. It really is the best of both worlds. If you aren’t patient enough to play and win, then you don’t have to pay to do so. During my many sessions of game play, in no way did I feel the need to pay to win. It is actually just the opposite, the game is so good, I would not be bothered purchasing it as a premium priced game.

Ramboat is integrated with Google Game Play Services with leaderboards and achievements. There are 72 achievements to unlock! If you want to level up your Google Play ranking, this is a good game to do it with.

Ramboat is a really fun game. The arcade style action, art work, music and sound effects, make this a must have download for quick bursts of game play or long sessions. Completing the variety of missions and leveling up, make this a game you will be playing for quite a while. It doesn’t get tedious or boring. Genera Games has a hit on their hands in my opinion. Let’s hope they continue adding to the game, and hope it gets noticed by as many gamers as possible. I think even Rambo would be pleased with the amount of action this game has packed into it.