Notch speaks out against Free-to-Play monetization, saying it should be illegal

The creator of Minecraft took to Twitter yesterday to address the free-to-play style of monetization and comments from another game develop, George Broussard, who made Duke Nukem 3D among other titles. The whole thing escalated quickly and actually started to get a little heated it seems.

The entire conversation started when George Broussard stated that “At some point, game developers who are elitist and anti-free to play games, will have to get over themselves”. Notch responded swiftly to that comment with “Fuck that noise”, followed by stating that free-to-play games are basically a bait-and-switch type of scenario and should be illegal. I can see what Notch is getting at with regards to the bait-and-switch analogy, especially with games that end up having pay walls but advertise as completely free-to-play. Some free-to-play monetization methods do work and are fair, but finding games that use those systems can be a bit difficult. 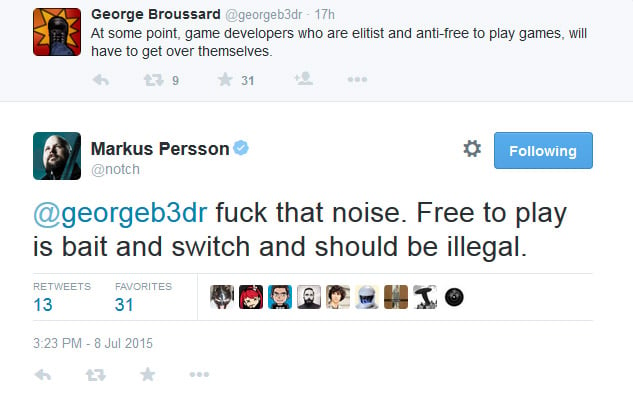 The conversation went on a bit longer before abruptly ending with Notch un-following George on Twitter apparently, or at least that’s what Botch stated. That didn’t stop others from interjecting their opinions into the conversation though, some for and some against free-to-play. If you have followed our site for any decent amount of time, you’ll already be aware of what some of our more outspoken readers think of free-to-play games. Tale of Tales added that “I was just going to mention that we recently ‘got over ourselves’ by quitting the game industry.” in response to George’s original comment.

For those of you interested, you can check out the entire conversation, including those interjecting into it, via the link below.