Escape Review: A Stunning game with a narrow margin for error

Ketchapp has a knack for working with extremely talented game designers. Their latest collaboration with Bento Studios out of Lyon, France, is another successful pairing in my opinion. After firing up the game Escape, you are immediately thrust into an achingly beautiful world. Unfortunately, you have to pilot your rocket through perilous environments. In the midst of such beauty, will be death and destruction… over and over again.

As you start the game, there is a solitary rocket sitting on a launch pad. A red light begins flashing, and you see several people run to get into the rocket ship before it takes off. The scene is set with black, gray and the singular light that is flashing red. Nothing can prepare you for what awaits. Your journey won’t be long folks, because in this game, you will perish repeatedly. At the time of writing this review, I have died over 250 times. At least 150 of those deaths were on a single level. Yes, the game is hard, but I keep coming back. Its beauty haunts me every time I fire up the game, and seeing my rocket explode into countless fragments, is something that I have grown accustomed to seeing… but, I know I can do better. 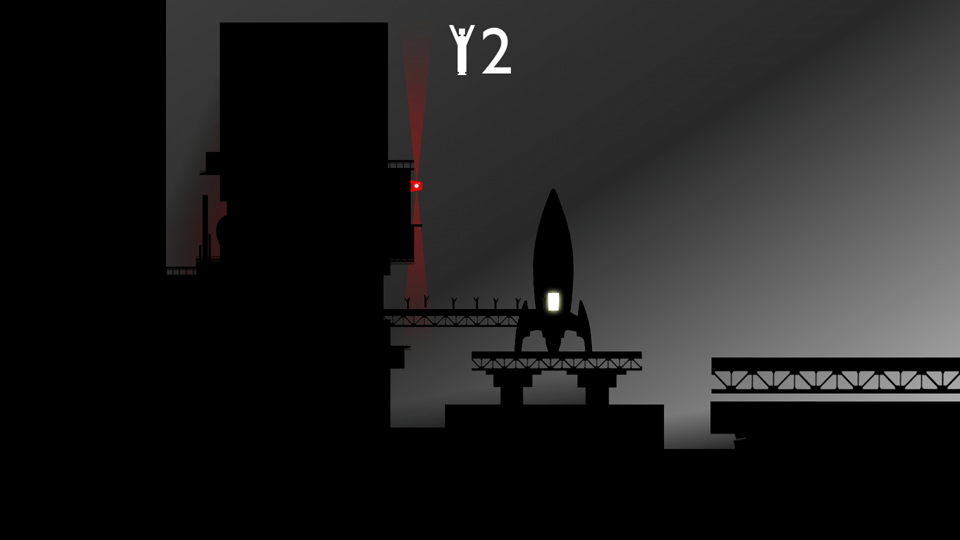 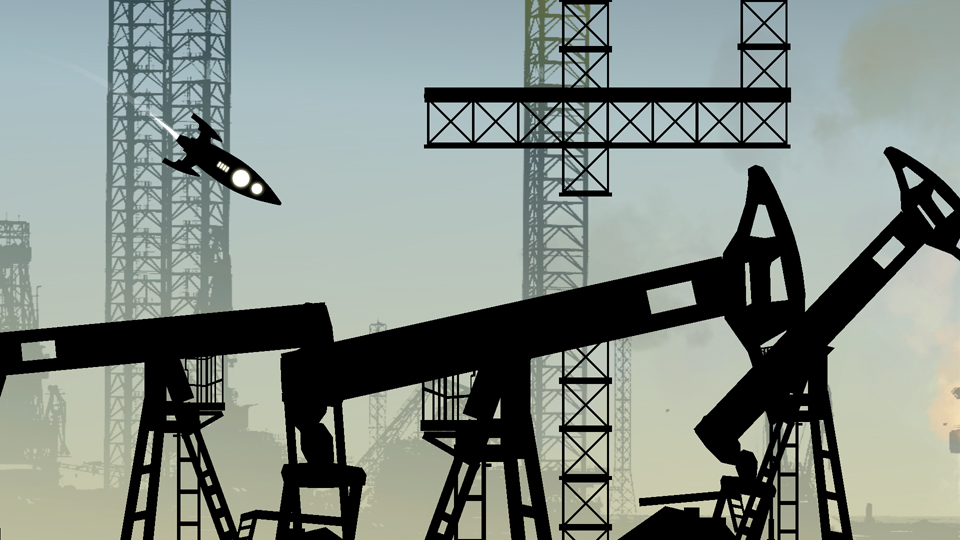 Such is the case for difficult games, with a straightforward premise. In Escape, that premise is simple. Survive as long as you can, by flying your ship through different landscapes. Even a Flappy Bird would cry at the difficulty of this game at times. As you navigate through different terrain, your ship can take on additional passengers. You will find them in the most unusual places rendered in white, a strong contrasting color, to what is usually on the screen. You have to get close enough to them, and then you see thin lines that connect the passengers to your ship. I have to say, I had to leave some of them behind. It was a difficult choice, because after you have played the same level countless times, you just want to try to get to the next stage. Sorry if I can’t get my ship close enough buddy, but there is a pipe up ahead that I will crash into, if I try to pick you up. Trust me, I have tried before. Maybe another gamer can scoop you up.

“Travel with your rocket through a world in destruction, and save the humans abandoned to their fate! Buildings are collapsing, mountains are sinking into teh ground, constructions are under attack… Humans are panicking and can only hope for one thing, being rescued by your rocket, which really seems like their last hope!” – Bento Studio

One button game play is how Escape has been designed, and it works very well. After you have piloted your ship for a few missions, you get the hang of when to depress the screen, and when to let go. Touching the screen allows your ship to ascend, and letting go, allows it to fall. Flying your ship is no easy task, due to the varying landscape that you will encounter. Bento Studio has mentioned that there is at least ten hours of game play in the adventure mode. I wonder if that is counting how many times you will die and start over? The good part about starting over, is that you take off at the beginning of the level of where you left off. You don’t have to go back to the beginning. This is a good thing because you don’t have to relive those tough stages to move on. There is a catch though. The bad part is that you can start a new adventure, but that may cancel how far you have flown previously. The reason I say that is because there doesn’t appear to be any save game slots anywhere. Be cautious dear gamer. 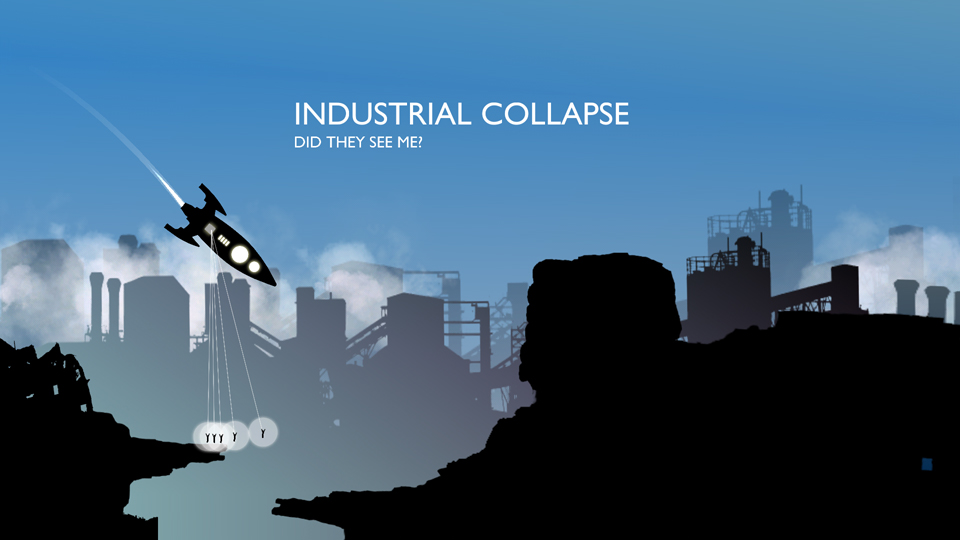 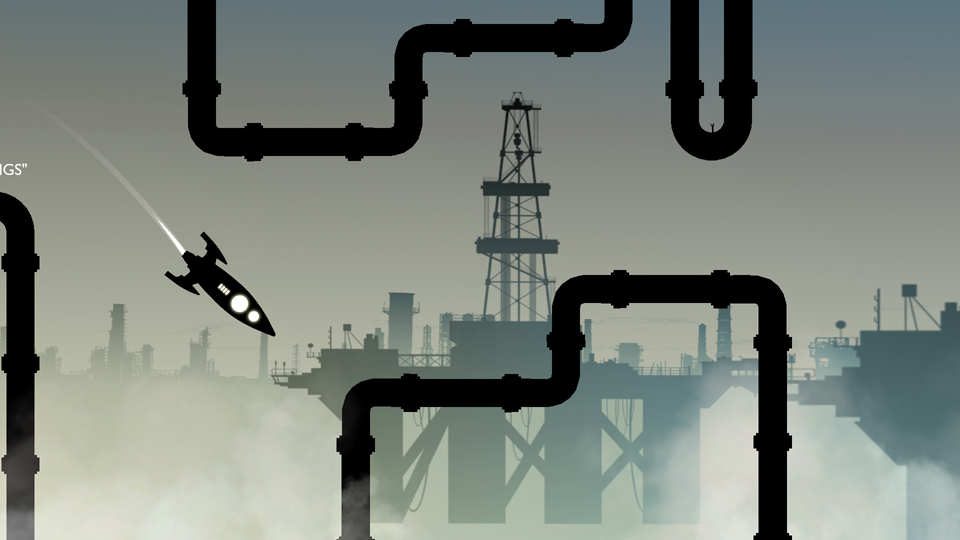 I have already said that the game looks amazing. The art style is one that isn’t new, but the artists have knocked this one out of the park. The subtle, but ever changing color palette is mesmerizing. The fine touches of detail represented in billowing steam and leaking pipes, really transport you to the treacherous environs. The music in the game helps to support the tension, of the harrowing journey you have undertaken.

Escape has two game modes, Adventure and Daily Challenge. Whereas the Adventure serves as the campaign portion of the game, the Daily Challenge, serves up a different daily endless runner scenario. You try to fly as far as you can, while picking up as many passengers (humans) as you can. It is a nice break from the campaign, but it is still, just as difficult.

Escape is integrated with Google Game Play Services with Leaderboards and Achievements. At first, I didn’t think there were achievements in this game, because I had not received any notification of unlocking any. I decided to check my Play Games Profile, and there they were, seven achievements. I don’t think I will be unlocking any of those any time soon. One is for completing the adventure mode, another for saving all the humans, and so on. If you do obtain one, they are each worth 10,000 XP. Based on the difficulty of the game, you will have earned those XP points for sure. There are also three leaderboards. One for deaths, which I should be leading at this point, one for the Adventure mode, and one for the Daily Challenge.

Escape is a free-to-play game, but don’t let that scare you away. The only in-app purchase is to unlock the game, and get rid of the ads. You can do that for $1.99  If you enjoy games that are difficult to play, but not because of the controls, then Escape is your game. If you cower in fear from repeated deaths in a game, or being stuck on a level for days, then this is not the game for you. Yes, it can be a rage-quit type of game, if you look at it that way. Or, it can be a game that you use as a patience builder. Either way, Escape is well produced and can be fun to play… as long as you have the temperament for doing so. If you do, you will be rewarded by playing a finely crafted game.