Anyone that has an Android device and plays games, is probably familiar with Glu Games. They have created some good games throughout the years. Most of which are easily accessible and fun to play. Without a lot of marketing hoopla, Glu recently released Tap Sports Football into the Google Play Store. I thoroughly enjoying playing football games. Unfortunately, there aren’t nearly enough of them out for any mobile device. That being said, here are some quick impressions of Tap Sports Football. A free-to-play game that is good, but has the potential to be great.

As I mentioned before, I love playing football games. I still miss the days of playing 2K Football on my XBox. Yes, I begrudgingly moved on to Madden, and enjoyed playing it too. However, the pickings are slim, when it comes to mobile football games. Glu Games has thrown their talent into the small pond and created Tap Sports Football. There appear to be quite a few options in the game, but the game play is still limited. If you want to play a quick game, then this game could be for you. It can be fun, but understand, you won’t be controlling any of your players or the plays. Drew Brees is the cover athlete for the game. Though you will not have NFL licensed uniforms, you do have NFL franchise players to choose from. It is kind of strange actually. 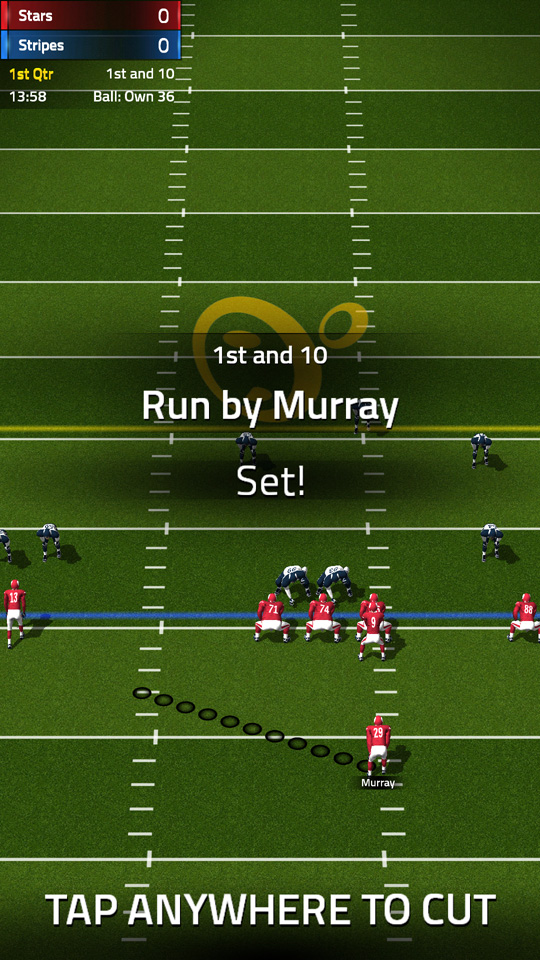 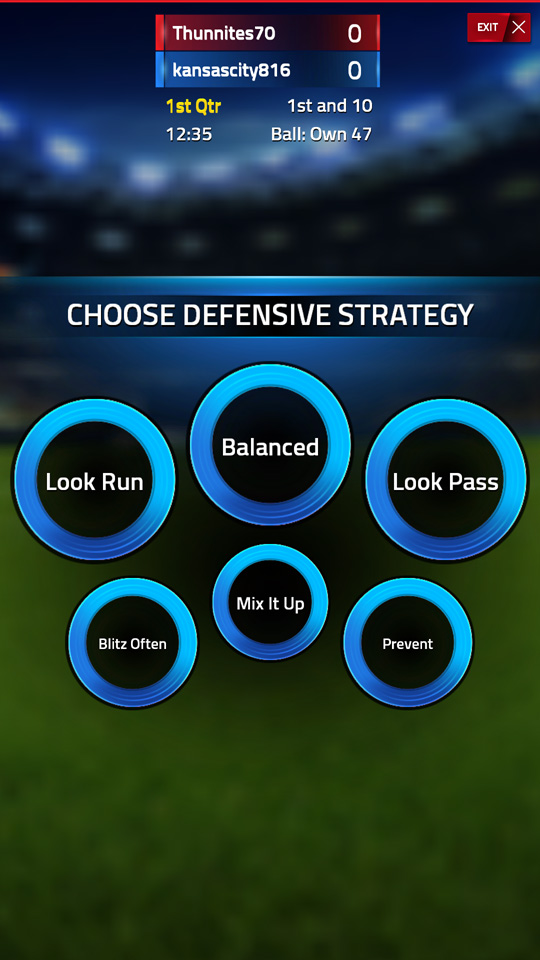 Tap Sports Football revolves around one button game play. In that sense, the game works pretty well. Whether you are on offense or defense, you choose the style of play and whether you want to run or pass the football. That’s really it. On offense you have running plays, passing plays, aggressive plays and conservative plays. Defense works similarly with its own package of plays. The only frustrating part about it all is that you don’t pick them. You don’t hike the ball yourself either. Once you have picked your play, the computer takes the next step to hike the ball. The only thing you have to do after that is tap the screen once to either throw a pass, or cut/juke if your player is running the football. As far the cut/juke move goes, I have never cut in enough time to avoid a player. I always got tackled. Even when you have the option of choosing to punt or not, if you punt, there is no in game mechanic for you to do that. It is simulated for you.

It couldn’t be simpler. Is it fun? In some ways it is, because you have to lead your receiver, and attempt to cut/juke at just the right time to avoid oncoming tacklers. Defense? Well in defense, you only pick from the group of plays, and then the game tells you what happens after the play is run. Why is that? The reason is because you are playing other people online. It can be in real-time or asynchronous game play.

Since this is a Glu Game, you know it is free to play. It has all the options of their previous games, but wrapped in a football game skin. You can draft players in the first, second or later rounds. Doing so pulls up a spinning wheel of names, akin to the wheel inThe Price Is Right. The spin is initiated automatically, and when it stops, the name of the player and their stats are given to you. After that, they are placed on your team in their respective position. You are given a screen where you can swap out your players too, which is a good thing. Continuing to draft players costs money, which you are awarded after you win games or complete achievements. The achievements are in-game, and at this time, are not connected to Google Game Play Services. 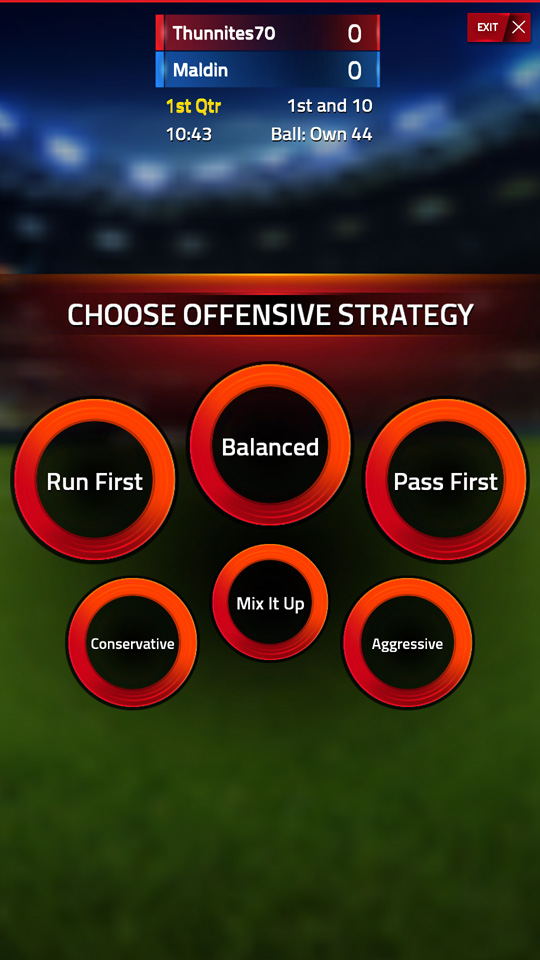 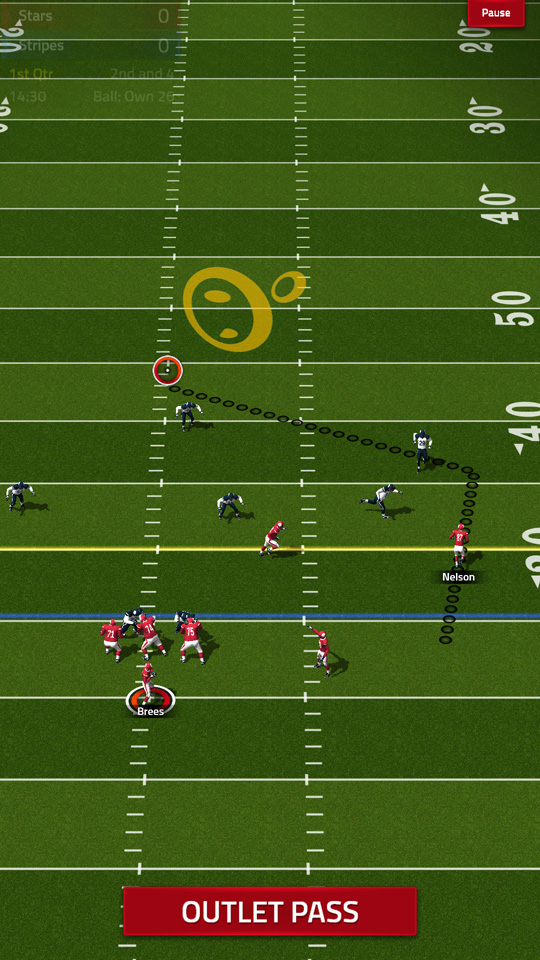 You are given one franchise player to start off, and that is Drew Brees. You can unlock other franchise slots for gold bars. Here’s a heads up, it looks like the gold is pretty hard to come by in the multiple sessions I have played. The in-game currency consists of gold bars and cash. You can use either currency to upgrade player coaches to help your players. That means you can upgrade the quarterback coach, O-line coach and so on. There are energy bars (some type of granola bar) that can be purchased because your players do get tired, and a bar shows up next to their name when they are playing. Packs of audibles are available for gold as well.  You are awarded in-game currency as you progress from a Rookie to Semi-Pro. You get the idea here.

In summary, Tap Sports Football has a lot under the helmet. Is it fun to play? Yes it is, but you have to understand that the game is all about quick game play. You won’t be playing anything close to Madden or 2K Football here.

Glu Games has put together a polished game. Only more time and game play will tell how the free-to-play mechanic of the game, either helps or hurts the overall fun you can have in the game. So far, even with limited controlling abilities, the game is good.

If free-to-play games don’t scare you off, or if you aren’t just against them in principle alone, you can give it a shot to see if you like it. This is only a first quarter review, there are three more quarters to go, before I really can determine if Glu Games has pulled off  a winning field goal. If you download it, let us know what you think of the game.