Bandai Namco has decided to connect with Hipster Whale, the folks behind the rather successful game Crossy Road, to have them put their own style into the development a new Pac-Man game. This new game will be called Pac-Man 256 and it won’t be your typical dot eating game. Hipster Whale has put a pretty unique twist into the game’s tried and true formula it has been using for35 years now. Oh, for those that are not aware, Pac-Man has turned 35 today.

[UPDATE: Wednesday, August 19th – 4:56 AM, PST] If you have been missing that puzzle-chomping game Pac-Man, then you are in for a treat. Bandai Namco and Hipster Whale have recreated Pac-Man’s world with their new game Pac-Man 256. The game is now available to download for free in the Google Play Store. The game does include in-app purchases, should you choose to take advantage of them. The link to download the game can be found at the end of this article.

So what is Pac-Man 256? This new game is not a level-based arcade game but is instead an endless maze runner. You will still have to eat dots and avoid those ghosts who want to kill you of course. There is, however, one new additional threat you have to be aware of and that is a relentless wave of pixelated ‘gibberish’ that is constantly threatening to overtake the entire screen. If you are a retro game fanatic, and used to follow the world of competitive arcade gameplay for world records, this may actually seem familiar to you. 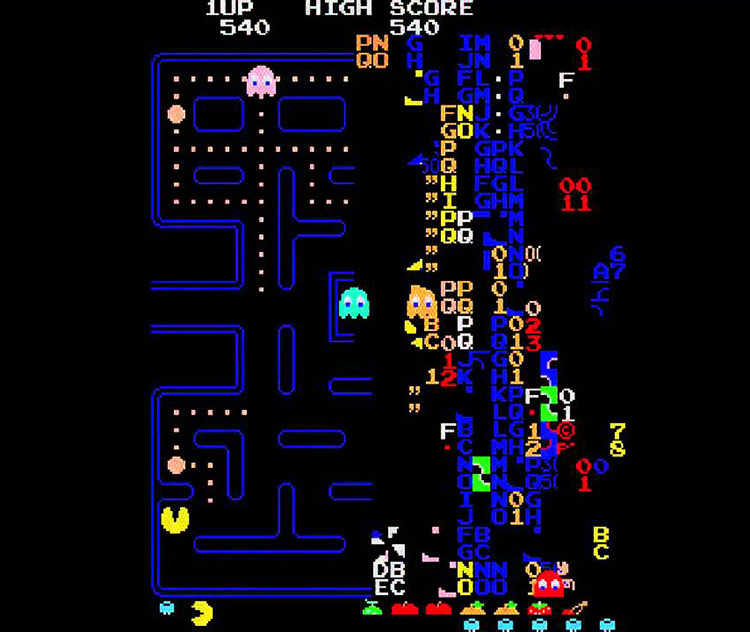 What the original arcade Pac-Man level 256 glitch looked like.

The reason we say this is because the gibberish that is threatening to overtake the screen is actually based off of the original Pac-Man game which, when you arrive on level 256, would end up corrupting the game’s maze on that level due to a programming bug, essentially making the game unplayable at that point. Pac-Man isn’t the only game to have suffered from this sort of bug back in the day either. Donky Kong was another game that had a similar bug.

Pac-Man 256 isn’t played like the usual Pac-Man games either. Instead of the typical overhead view, players will be playing Pac-Man 256 in an isometric perspective which could add a little bit of extra challenge to the game. While there are the classic four ghosts in this game, there are also some new and differently colored ones to be aware of as well.