User-created content will soon be making its way to Badland

Some really great news has come out today regarding the multiplayer arcade platformer Badland. Frogmind Games has announced that they have been working on a full level editor that will be making its way to the game in a future update, letting users create and share new levels for others to play.

When we say a full level editor, we mean it too. Users will be able to place, scale, and rotate different elements as well as have them power contraptions to make new puzzles. You could make mini-games if you want, the sky is the limit basically. One tidbit of information that is kind of cool to know, the level editor that is coming soon is actually a streamlined version of the editor the developers used to make the current levels in the game. 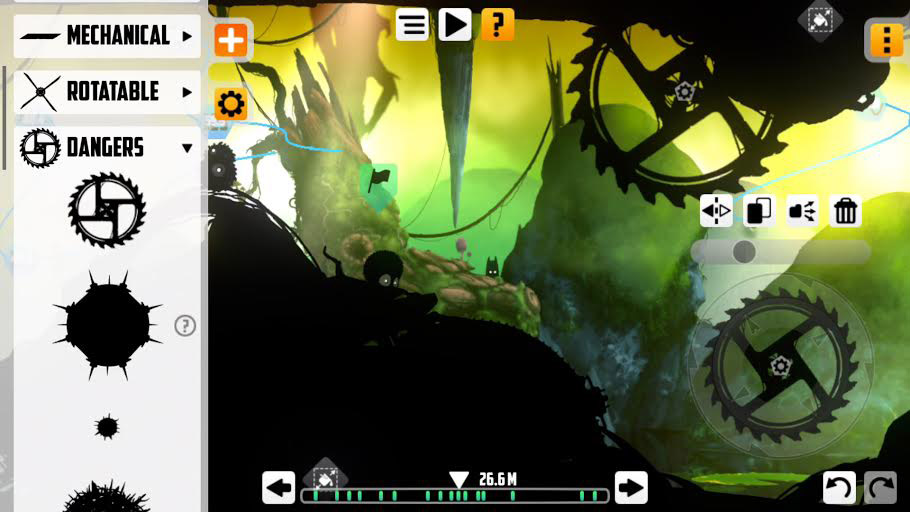 While you can make your own stages from scratch, the level editor can also open any existing level in the game to allow users to completely change them to something new. Once your newly created level is complete and you are happy with it, you can unleash it onto the world from within the game. Then users can play and rate your level and there will be a way to filter user-created levels so you can easily find the highest rated ones.

What is even more cool is that each week Frogmind Games will select one of the user-created levels to become an official level in the game permanently. These will appear in a new day that will be ever evolving called the Eternal Day.

We’ll choose the best three user made levels just before the launch, feature those levels in the launch and give their makers some Badland swag. The winning level will become the first official level of the Eternal Day. – Frogmind Games

Right now the whole level editor system is in beta, which users who are interested in trying it can sign up for right now. The top three levels made during the beta will be selected as the first official three levels in Eternal Day when the update and editor officially launch. There’s also a forum with plenty of guides and videos to check out and to learn how the editor works and what you can do with it.

Unfortunately, the level editor will be arriving for iOS first soon, which is what the beta is for we believe, and then Android will get it soon after. There’s not official launch dates announced for either platform though.