Neverending Nightmares is a game that was released by Infitap Games. It’s a game that is very simple to play, control wise, but is rich with content. The visuals, the soundtrack, the content, all flow together seamlessly, to make something that is compelling, and maybe even more than a game. This game was disturbing, compelling, and beyond both: extremely enjoyable. Let’s see why.

Players assume the role of a male protagonist named Thomas, set in the 1800s (based on the dates on the gravestones in the graveyard). The game begins by showing me a young girl of about six years of age, who is bleeding from the mouth, and coughing up more blood on top of what’s oozing out. The camera then shifts perspective, so I see the left arm of my character (from a first person perspective), holding a knife that is currently plunged into the intestinal region of the little girl. I then wake up in bed. Is my character guilty of murder? Is it a nightmare only, with nothing else to worry about? This wakeup-after-horror device sets up a pattern, where I find my character waking up from one nightmare, only to begin another, subsequent horror that’s worse than its predecessor, with each one advancing the story slightly. There isn’t much of a narrative, but at the same time, the game is HIGHLY story driven. There is no list of items for me to manage, hit points to mind, upgrades for me to judge and apply. While not explicitly spelled out at the outset of the game, my goal seems to be just to resolve the cause of all the macabre that I end up encountering. 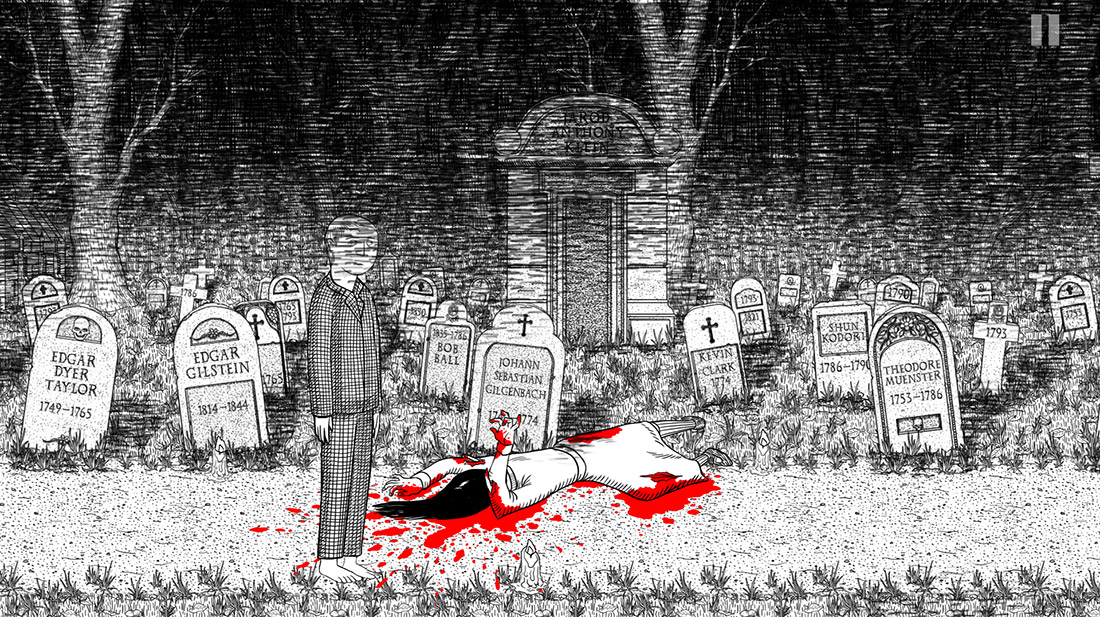 The story takes several different, and at times jarring, twists that are frequently at the end of a nightmare or the start of the next one, with some very brief and VERY illuminating dialog. After each instance, it’s then incumbent up on me to survive my wandering through the nightmare, to “graduate” to the next one. What’s interesting about this approach, is that the nightmares begin in linear fashion, only to see them branch out once you’re several nightmares in. There are three different endings, with two different paths that each preclude one of the three endings; think how bowling pins are positioned, if you were to connect the pins as dots from pin one to the adjacent pins located behind it, to each pin behind those, and so on, always moving in one direction. Eventually, the paths diverge and choices are lost, and it’s the same idea with the endings of this game. And while the different endings are disparate, each offers an explanation for what the the player witnessed (and Thomas experienced) in its own way.

As I progressed through the nightmares, I noticed that there are several things that were of import to the game that are worth noting here. First, the rules of the gameplay are simpler than simple. The game is almost exclusively done monochromatic coloring. Save for blood, everything that is colored can be interacted with, in some way. Second, you tap on what you want to happen. Tap on a location, Thomas will walk there. Tap on an object, and it will be inspected or picked up, and Thomas can’t hold more than one item at a time. That’s it. With most of this game containing walking/exploring, keeping it simple seemed to work. I found this especially so, as I wandered various hallways and popped into rooms that were conjoined to where I was. If nothing in the room was colored, there was nothing to be done in that room. 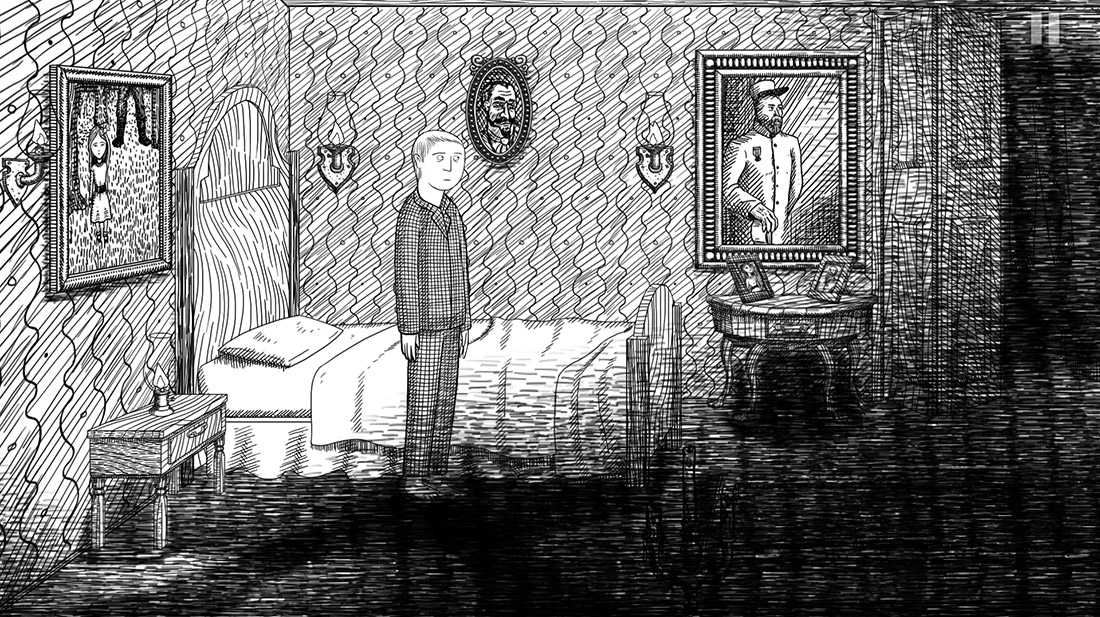 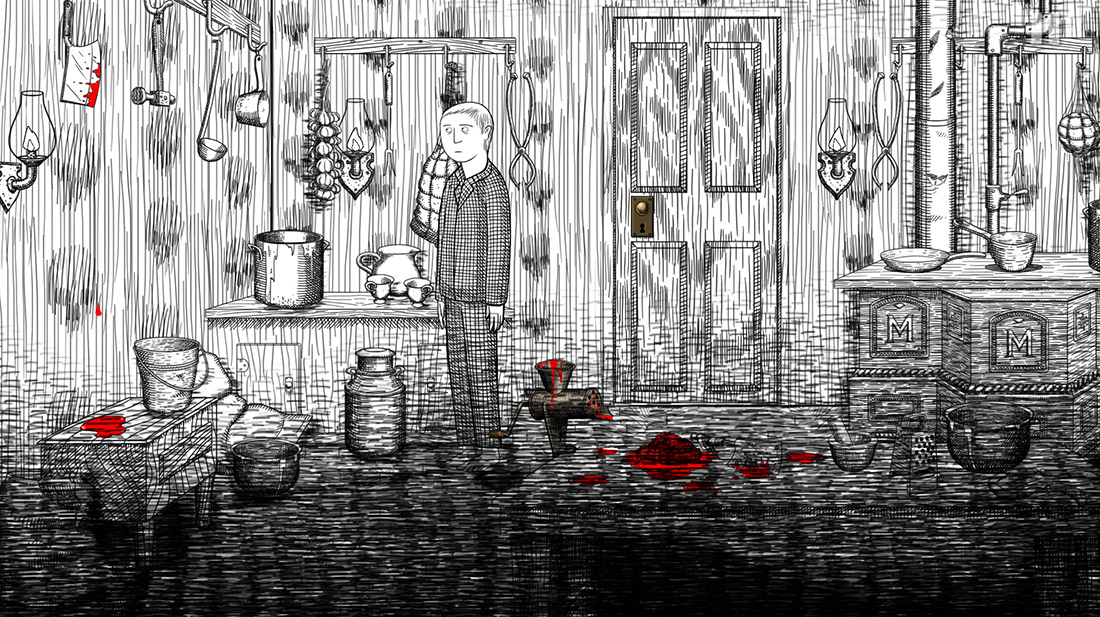 Looking for colors made it quite easy to size up a room as soon as I entered it, looking for places or things to interact with, before taking in the ambiance… more on that later. When something caused my character to die, I found that I woke back up in bed, and exiting the bedroom caused me to walk through the last door I had passed through before death, skipping past all the progress I had already done once. Very nice touch. In the game’s menu, found before starting play, I can also replay any of the previous nightmares, were I inclined to seek a different ending. ON the whole, I found this flexibility to be very nice, considering there’s only the one save file.

On to the best part, the look and feel of the game. I’ll sum it up as this: THIS GAME IS CREEPY. And I loved it. It was highly psychological, as I was unable to discern (before my ending) if what I was seeing was real, a waking hallucination, nightmare during slumber, guilt, or who knows what. I found that ambiguity enticing. I was very much invested in achieving the outcome, to get a resolution. And the style of the graphics is worth complimenting. While very simplistic (it’s very much in the style of a crude lithograph, or hand drawn using a black pen on white paper), it’s very fitting for the mood. When there’s darkness encroaching, you see more of the tiny, black lines appearing on top of the game. Where there is a source of light (usually a candle), those little black marks recede. The simple black and white coloring works on multiple levels. It left me with an impression of coldness, and uncaring. It also allowed the bright red of the blood to stand out and be emphasized in ways that a full-color game couldn’t have. 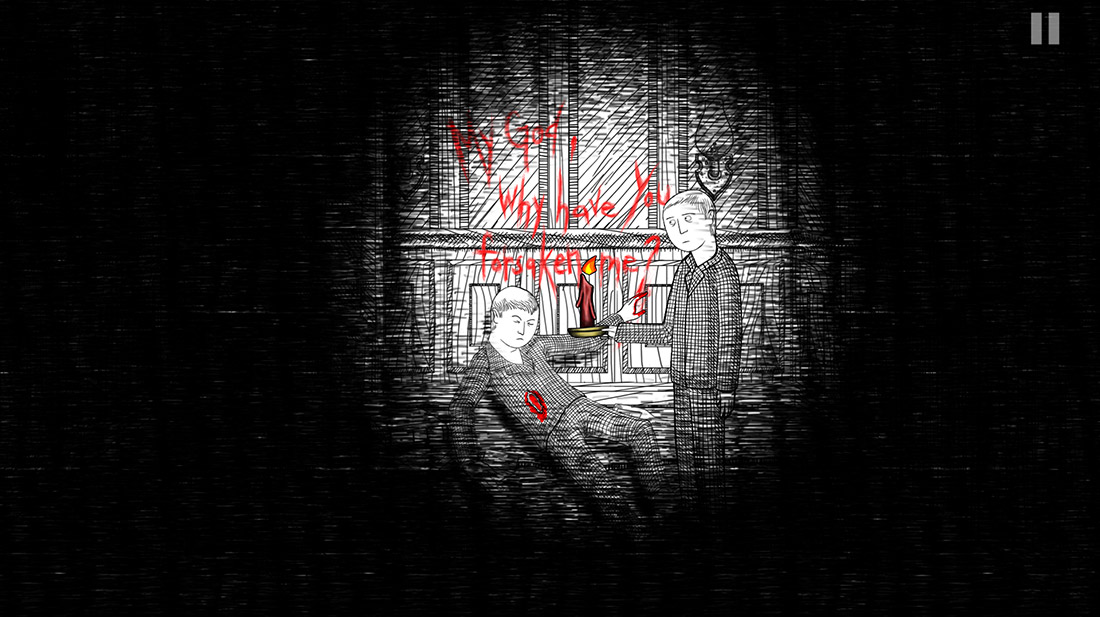 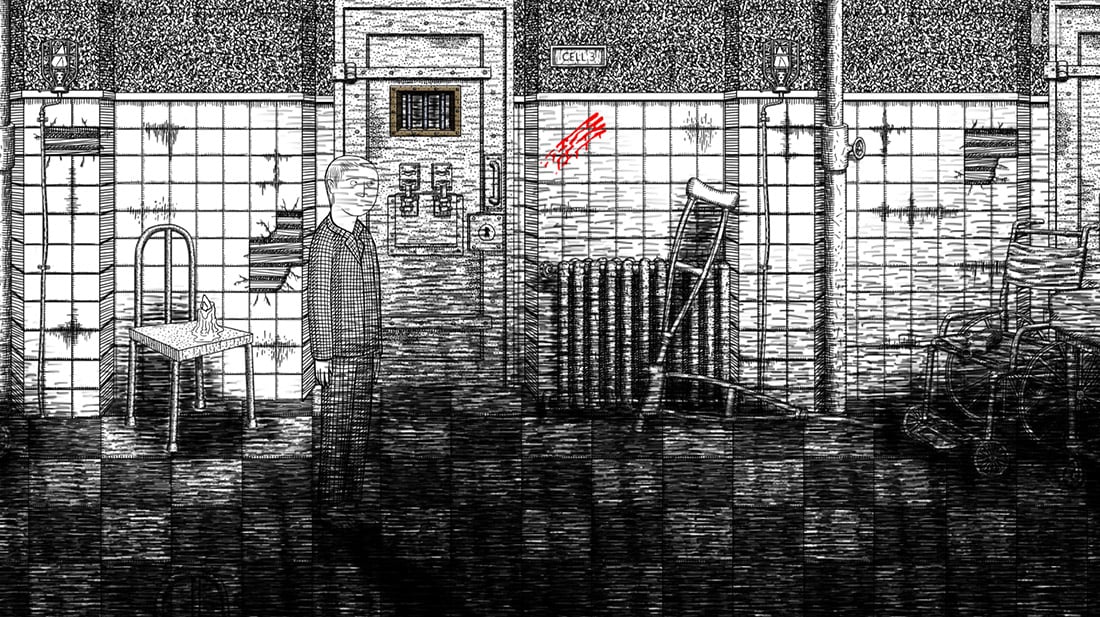 And there was lots of blood. Dripping, pooling, smeared, and so on. The color use and frequency of seeing blood, and 19th century setting, gave the whole thing an interactive Edgar Allen Poe feel. In the early part of the game, the setting is a mansion or manor of sorts, and everything in it fits a mood of horror. The artwork hanging on the walls in rooms and halls is disturbing, ranging from people that I presume are Thomas’ family looking somber, to unhappy, to showing people being killed. There are threats to Thomas that need accounting for, in the various halls of this manor (and beyond), with each being gruesome in its own way. Possibly-dead-but-not-really asylum inmates, to little girls carrying long and very sharp blades, to other horrors, all bent on giving Thomas very bloody deaths, and all of them need to be avoided at all costs.

And with this game being in the context of a nightmare, it allowed the developer a certain amount of “wiggle room” that might not be afforded with other types of stories. Things didn’t have to “make sense”. Take the layouts of the various levels/nightmares. You can walk around corners at the end of a hall way, in what appears to be a square formation of four hallways that all connect, yet after walking around three or four corners, each one seems new and different from the others. Being a nightmare, that makes sense (in a backward type of way) that it wouldn’t in other types of games. To add to the creepy factor, there developers used surprise to his/her advantage. For example, having people or things appear out of nowhere, visible only from a strike of lightening before returning to total darkness was used well in this game. I also saw the shadow of things passing by outdoors, dolls with empty eye sockets that were sitting in the background blinking at me while other dolls had their faces smashed in, messages scrawled on the walls in blood, to dismembered bodies, and so on. 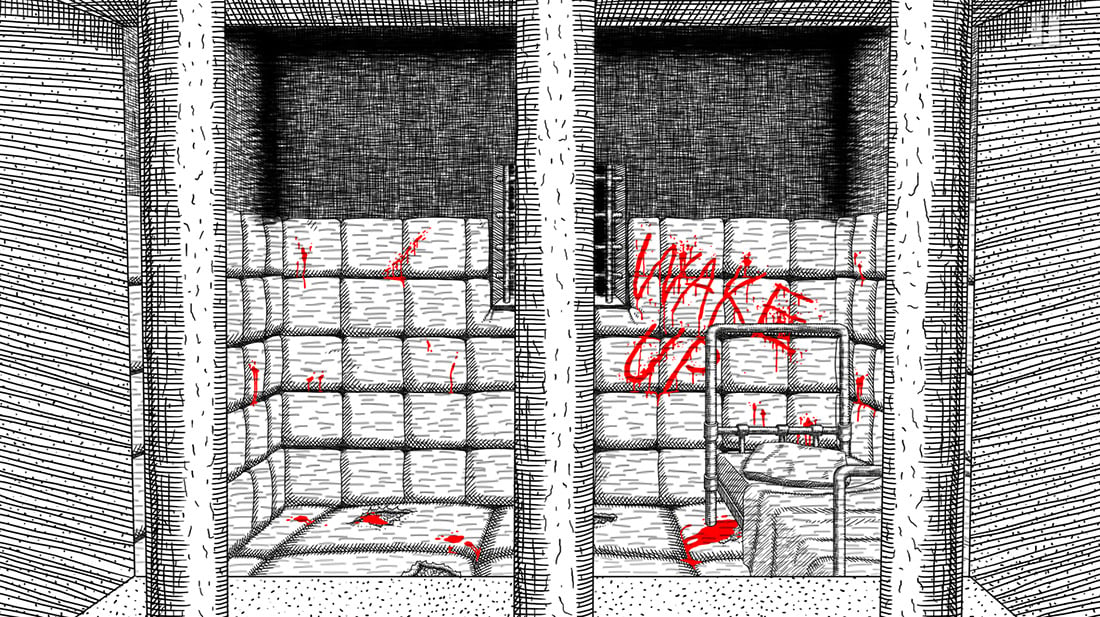 Even the soundtrack was great. It’s the type of music (noises might be more accurate) that one would associate with a suspenseful horror movie. And when it wasn’t music, I could hear my own footsteps causing floorboards to creak, or the footsteps of others (gulp). At other points, it was hearing “Thomas” or “wake up” being whispered, or some girl sobbing in the background. While the game never prompted me to do so, I found using headphones really enhanced the experience, as well as playing in the dark.

I think this is the first review I can recall having written, where I have no critique to offer. Price… maybe? It’s available from Humble Bundle for around a ten spot, but it is currently not available on Google Play just yet, although it should be soon. If you aren’t looking for a forty-hour RPG (I played through it in like three or so), I can recommend it easily, and unequivocally. The soundtrack is great, the visual style is great, the gameplay is great. It’s disturbing (in one room, a child eating raw and bloody intestines), but I couldn’t help but continue on to try and make sense of it. If these psycological/horror/creepy games appeal to you, get this.