Nvidia, makers of Android tablets, set top box, portable gaming rig, and a complimentary Bluetooth controller, have pushed out a couple of firmware update today. First on the list is some patching up of the NVIDIA Shield (the handheld model), with the release of Software Upgrade 106.

They open with it including security updates, but without any specifics. Beyond that, they mention an update to the functionality of the Nvidia button Voice Search to the Shield HUB. Lastly, they go on to fix the Start/Play button so it now behaves the same as it did when it was running Kit Kat. 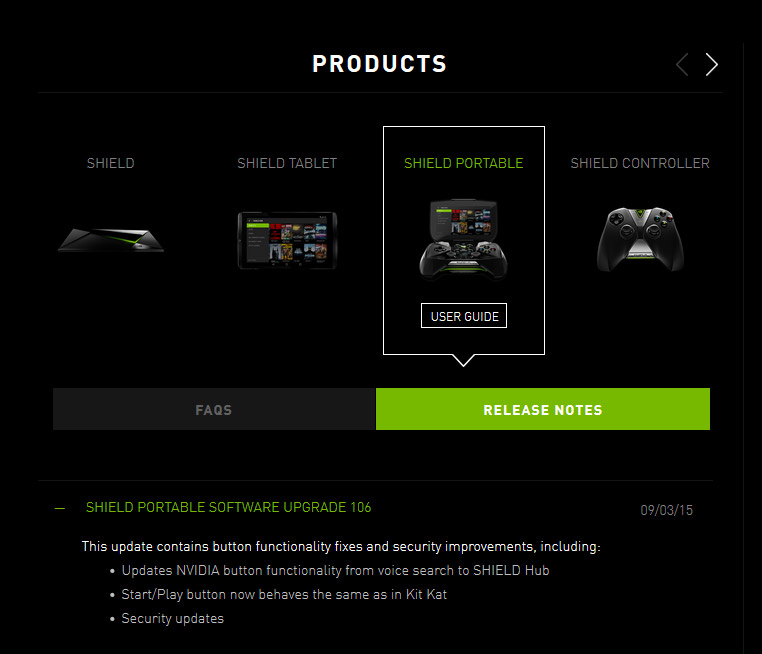 For Android TV, now up to Upgrade 1.4, it strictly optimizations for a slew of apps and games:

This War of Mine – You play as a group of civilians trying to survive in a besieged city.
Xenowerk – A top-down action shooter in an underground science lab.
Windward – An action-filled multiplayer sandbox game that puts you in control of a ship.
Killing Floor: Calamity – A re-imagined Arcade Shooter version of the original Killing Floor.
Flyhunter Origins – A sci-fi platformer game developed by former Pixar artists.
Twin Runners 2 – A stunning and very challenging try and die game.
Pure Pool – The most authentic Pool experience from the comfort of your couch.

All of the above mentioned apps and games have already been out for a short bit, but the update mentions further optimizations to those games and apps for the Nvidia Android TV. If you don’t see either update for your respective device, you can always go into settings and check for its availability.