Ketchapp puts games out with amazing consistency. They have a pool of game makers that they work with that routinely put out some pretty good games. Generally they are games that you can play quickly, have an easy learning curve, but at times, can be brutally difficult. One thing remains throughout their games though, they are generally fun to play.

I will admit that I appreciate most games that Ketchapp releases. One of the software programs used to create some of the great games that Ketchapp publishes is BuildBox. BuildBox is a program that allows you to put together a game without coding. If you are interested in developing games, you may want to check out BuildBox. You can try out the software for 30 days for free. Some of the other games created with BuildBox are .PXL, Phases and Ball Jump. I am sure you have either played them or seen them in the Play Store. This time around though Ketchapp has used BuildBox to create Sky. The game looks great, has excellent controls, and can be quite challenging. Nimble tapping anyone? 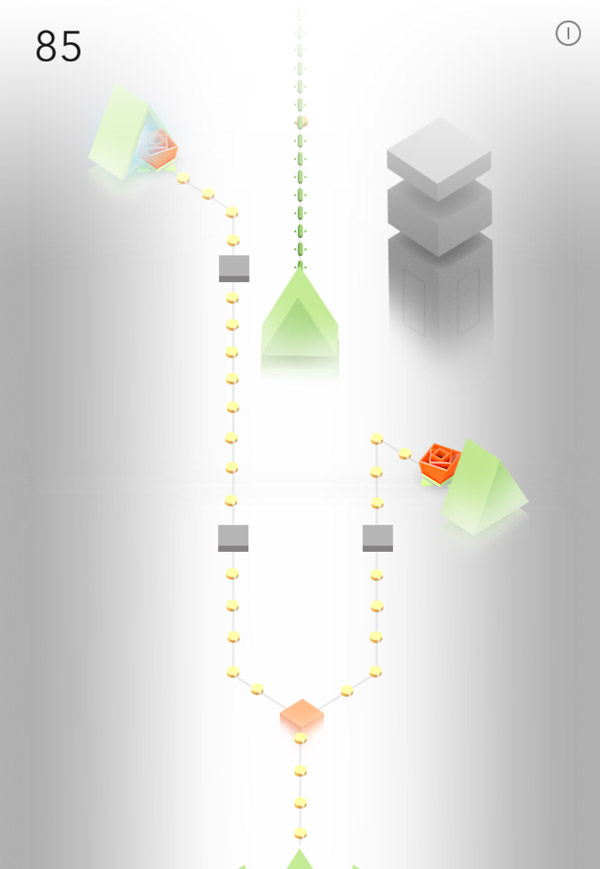 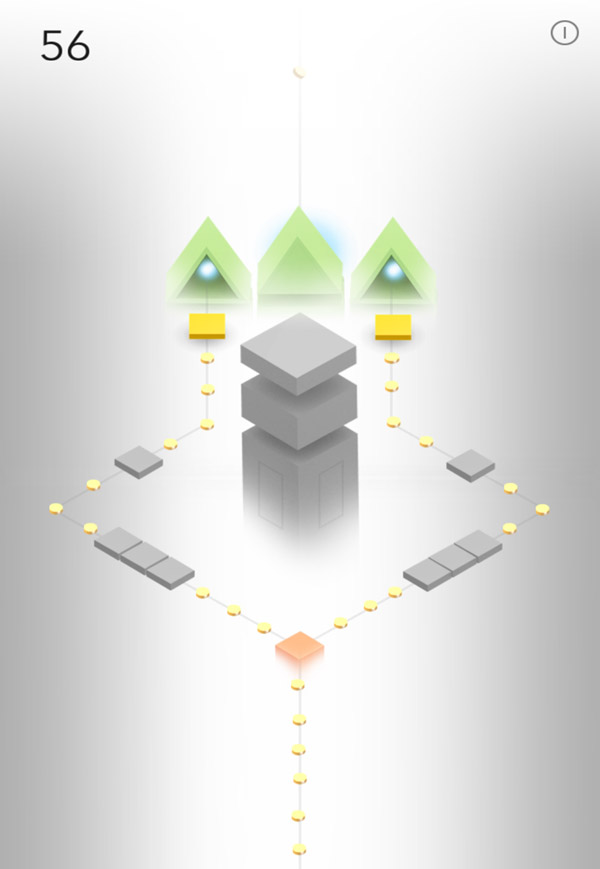 The game starts you off with a simple square in a procedurally generated maze of sorts. It is kind of a mash-up of Pac-Man and platforming games, without the platform. I know, that sounds kind of weird. You actually have to see the game in action. There is really no easy way to describe the game. Although the visuals are aesthetically pleasing, they don’t help you understand the game play that much more. Basically you have a square that goes along a path. You will unlock more shapes/objects as you collect the small bits that are along the path, hence my Pac-Man comparison. Along the path there are other squares that you need to jump over. if you tap the screen once you produce a single jump. Double-tapping the screen allows you to double jump, which is needed over multiple objects/squares. It sounds simple right? Well, not so much.

The maze or paths that you travel are constantly changing, as is your perspective. Sometimes your square is coming right at you, and at other times it is at a different angle. It is a nice touch, but it adds a fair amount of difficulty because it makes it harder to time those single and double jumps. Oh, but there is more. You will encounter a green tent or two or three. Guess what? Going through the tent clones your square, or whatever object you are using to jump through the subtlety colored environments. Now, this is when things get interesting, because now you not only have to worry about changing perspectives, you also have to time the jumps of two, three or four different objects. It actually gets quite maddening…in a fun sort of way of course. As with most Ketchapp games, your run for the high score doesn’t last long. You will find your object exploding into the squares quite often. The other item you will encounter is an orange square peppered throughout the path. The orange square takes your many selves back to being a singular object, which is often met with a sigh of relief. 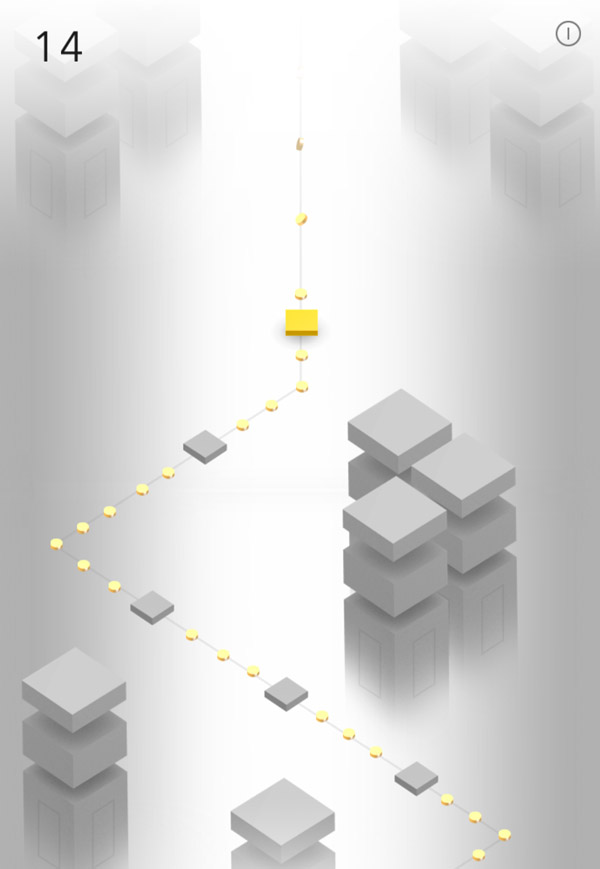 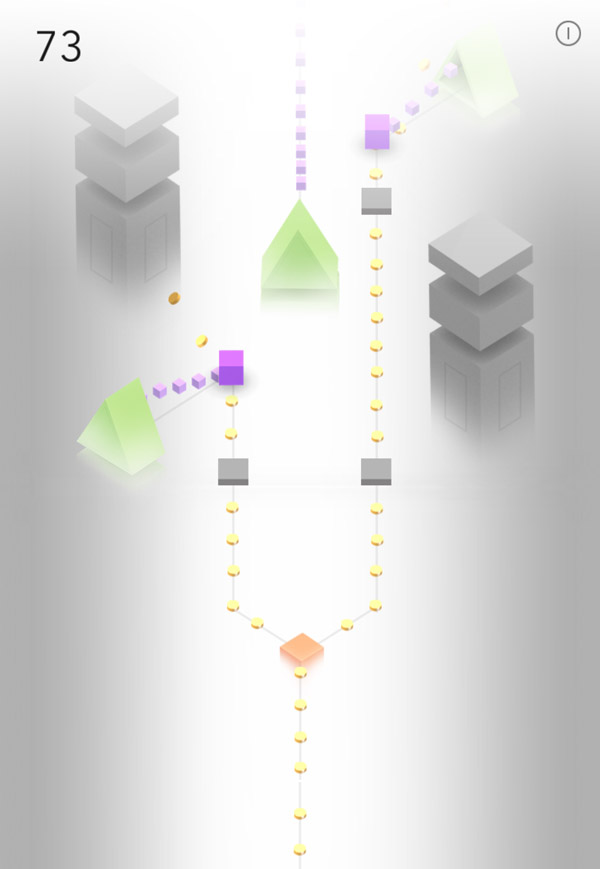 So that about sums the game play up, albeit not necessarily in the greatest fashion I am sure. What is enjoyable is trying to string together the longest run that you can. The environments are sparse, but well done. There are Monument Valley like structures surrounding the maze. You are able to unlock different objects to use to travel through the maze. You start off with the square, but you can unlock a circle, cube, rose, unicorn and other items. I have tried to unlock the Ninja a few times. Somehow, what you choose to unlock doesn’t unlock when you choose it. I am not sure what is taking place to make that happen. Trying to unlock the Ninja gave me the unicorn. This happened more than once. Each object costs 5,000 coins to unlock. Don’t worry, you can rack up coins pretty quickly, even though you won’t play long with each run, unless you are really good. You do have the option of watching a video which will net you 900 coins each time. I have to admit I watched my fair share of videos. They typically last anywhere from 10 seconds to 25 seconds.  Look at it this way, it helps you with being more patient as you prepare to play the game again.

Sky is a free-to-play game. The only in-app purchase is to unlock the game, which costs $1.87. This will remove the ads from the game. This is also a good thing because unfortunately, like other Ketchapp games, the ad banner is put in the worst possible place, which is at the bottom of the screen. More than likely, this is where you will want to tap the screen. The game is integrated with Google Game Play Services, but only has leaderboards. This is another game that would be great to have achievements, but there aren’t any currently provided.

If you like procedurally generated, maze-like games, I recommend Sky. The game play is fun, but challenging. The environments are a bit stark, but intriguing. The music is definitely pleasing, and consists of a looping melodic piano theme. There is fun to be had in unlocking the different pieces with which you can play through the 100 different generated levels. Each piece has a unique trail or affects the board in some way as it travels throughout the maze. My only hope is that we can get a cute little green robot for all of us Android fans, as there is curiously included, a cute little green apple that has a bite taken out of it. Hmmm… no, we won’t settle just for a game that iOS has too. Ketchapp, do you think we can get a little representation in the game too? A robot or a marshmallow or something? Thanks Ketchapp! We know you are listening. Download Sky today for some enjoyable puzzle/maze/jumping fun. It’s easy to recommend this game for downloading. Back to my multicolored unicorn!