Avoid It: A Story of Survival is a game that is aptly titled based on the structure of the game play. However, as a gamer, you should do anything, but avoid this game. It is bold, beautiful, and brutally difficult in some areas. It is well worth the price of admission. Exceptional vertical platformers/runners (rollers in this case) are few and far in between. Avoid It heads to the leader of the pack, due to excellent controls, smart and unique game play, and creativity in art that is fascinating.

Innomaz Inc is a digital app publishing start up team. They have worked with Studio Ro to bring Avoid It to Android/iOS. Studio Ro is a team of indie developers. Only one of the members of the studio is full-time, whereas the rest of the team have other jobs and worked part-time developing this game. Interestingly enough, you wouldn’t know that based on Avoid It. The game is extremely polished and vaguely reminiscent of the ever-so popular game Badlands by Frogmind. Badlands has garnered over 1,000,000 downloads in the Google Play Store. The reason I say it reminds me of Badlands is that both games are set in fantastical worlds, the controls are simple, but flawlessly implemented, and the art style is organic. 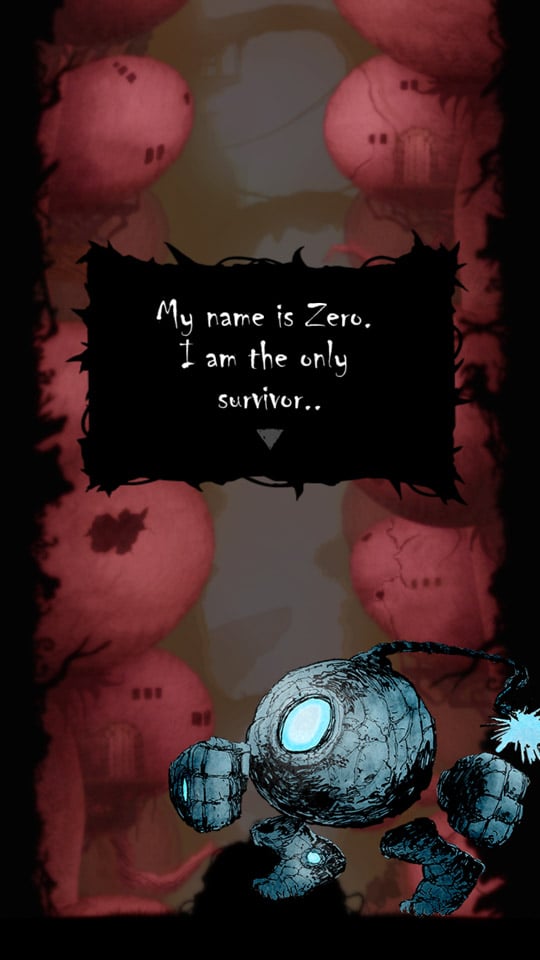 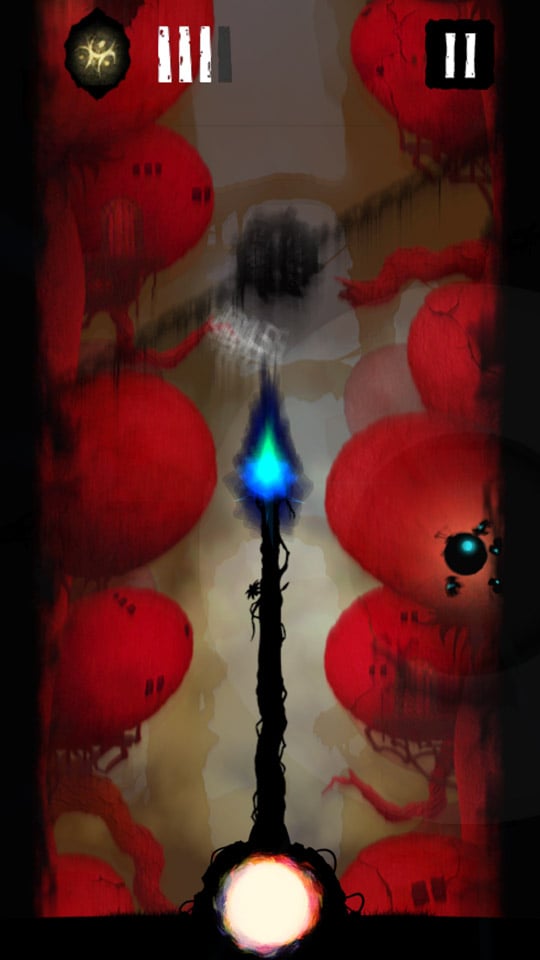 Avoid It has an intriguing story line that sets its main character Zero in a dark world, waging war by simply avoiding his adversaries. Zero is a circular cyclops looking creature with floating hands and feet. He wields a scepter that looks like an Olympic torch. He uses his shape to his advantage as he rolls, jumps and slides through the environment. You have to manipulate the environment successfully, to ascend the thirty levels, through three available chapters. There is a fourth chapter, but that will be coming as future downloadable content. There are two modes of game play as well. There is the normal mode, and then there is the hard mode. Let me say this, the normal mode isn’t a walk in the park, so the hard mode has to be mind-boggling at best.

The goal of the game is to ascend through an eerily dark world. At times, instead of climbing, you will be falling. Studio Ro has set up an interesting tale. “You are Zero the lone survivor of your people, tasked by the spirit of your father to take your family’s ethereal light energy to the top of the mystic hill. Beware adventurer, the road will be an uphill battle, with jaw dropping surprises around every corner of this beautifully stylized challenge. The story of supernatural beings struggling to protect natures light.” – Studio Ro

If you have ever played games like Ninjump from Backflip Studios, then you may be pretty familiar with these type of vertical platformers/avoidance games. However, Avoid It takes all of those basic elements, ratchets them up to ten, and makes a game that is challenging and rewarding at the same time. You basically tap the screen to bounce from wall to wall, slowly ascending the mystic hill. At the center of the screen is an ornately drawn lighted wick. If the wick descends and reaches the bottom of the screen, it is game over for Zero. Fortunately, you have places for you to grab extra life as you are climbing. You are forever being chased by a hideous spider like creature. The creature sends out a rotating red flower, but after time, it explodes. It always seems to be right where you need to jump to next. If that wasn’t enough, there are traps to avoid and obstacles blocking your path. This is where the power of manipulating Zero gets to be fun, and strategy in game play ensues.

Zero not only has the ability to bounce from wall to wall, he also is able to slide downward. Sliding allows Zero to reset, stop or slow the obstacles that are in front of him. There are circular-like blades that move along chains that can inhibit Zero moving forward. Yet, if Zero bounces high enough and then slowly slides down the walls, he is able to reverse the movement of obstacles. The implementation of this skill is brilliant in its manifestation. Zero’s movement is slightly blurred and the obstacles in particular, become transparent, when Zero has slid far enough to reverse the action of the obstacle. So while you rolling, running or bouncing away from the tentacled beast that is after you, anticipating how to avoid the traps in front of you becomes essential. While you are doing that, there are red glowing branches that you must activate by rolling over them. This releases lighted artifacts. In each level, there are four to six of these that must be obtained. You don’t have to grab all of the artifacts to get through the level, but if you are into three-starring games, and are all about completion, you will keep playing to you get all of the artifacts on the level. You are also rewarded if you get through the level without being hit. Good luck with that! So often you will see what I saw during game play.”Failed. Zero got bombed. Rock yourself a little harder!” In some ways the game reminds me a lot of pinball because you will get bounced around a lot by some of the traps and obstacles. 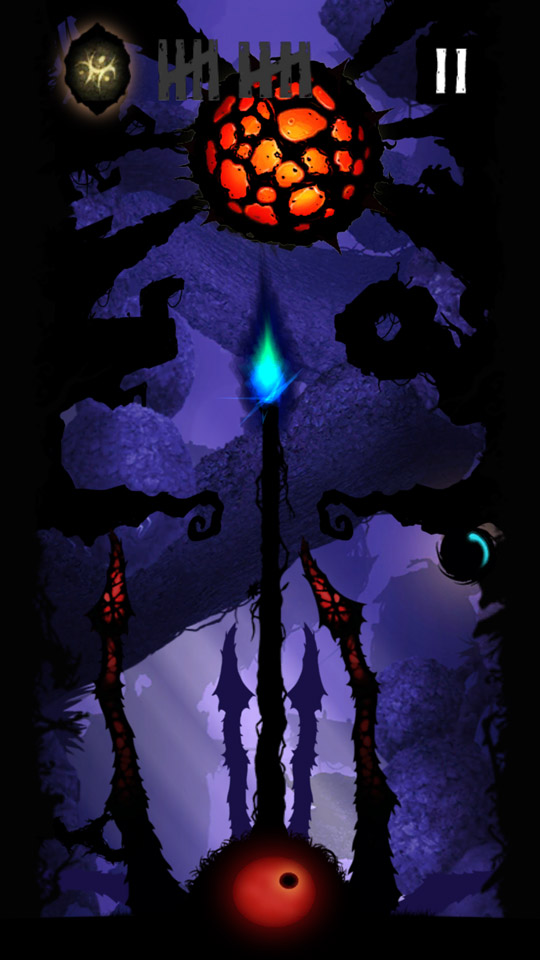 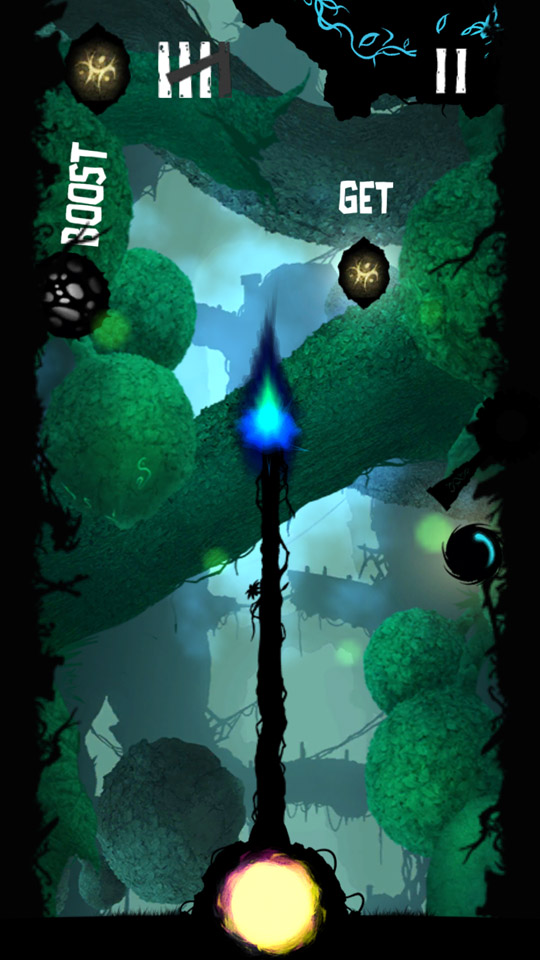 The controls are great, but what really makes this game shine is the artwork/graphics. If you have a device that has a high-resolution screen, you are going to really love how great this game looks. Colors explode off the screen to immerse you in the world that Studio Ro has created. The artwork alone is worth checking out. There are tutorial tips that are given as you play through the game. They are helpful, but extremely well place. They become part of the atmosphere in the game. It doesn’t remove you from the immersion of game play as some tutorials often do. White text appears to let you know when to slide, or when you need to unlock a gate with a key. As you are being pummeled by obstacles, text like boom pops up, akin to something you might see in a comic book.

Rounding out this great little game is the music. The music is produced by Inno White (Innomaz). If you like EDM (Electronic Dance Music), then you are in for a treat. This soundtrack would fit perfectly in a feature film (If it were a tad bit longer). Playing the game with a great set of headphones on will literally transport you to another place. A good hallmark of an excellent in-game soundtrack, is if you can listen to the music while not playing the game. You can easily do that with this short soundtrack. I wish the tracks were a bit longer to enjoy, but it is definitely worth checking out. If you are interested, you can stream it on SoundlCoud. One of my favorite tracks is Past the Pain (Stage 2). It has the nice lilt of a pan flute, while being underscored with a great beat, set in the sounds of a deep jungle environment.

Studio Ro has created a wonderful game. The controls, art, music and game play are top notch. The game costs $.99 to download and there are no in-app purchases. As I have said before, it is money well spent, just to be able to encounter all that has gone into making this alluring game. It is not an easy game, but some of the best games require more of your skill. Avoid It is one of those games. Don’t miss out on this indie game. Stream the enchanting but brief soundtrack on SoundCloud too!