Exos Saga, the fantasy themed action-RPG, now has an official release date for the end of this month, September 30th. We previously on this game a few times already including the current pre-registration going on. For those unfamiliar with the game, this is a squad-based RPG with some solid looking visuals as well.

[UPDATE: Wednesday, September 30th – 11:36 AM, PST] Exos Saga the action-RPG from Eyedentity Mobile is now available to download in the Google Play Store. The game is free-to-play and does have optional in-app purchases. If you are interested in checking this one out, the link can be found at the end of this article.

In the land of Exos, Emperor Theodore has been murdered. Coincidentally (or not), the famous and powerful sword known as Axisturk has been stolen. This pair of events events thrown Exos into chaos, causing a special group to be assembled from the king’s guards. Within Exos Saga, there are over 150 characters that players can draw from to assemble their squad, and each of the characters come with four abilities, in addition to thirteen different classes, thus enabling a wide variety of combinations and combining the active and passive abilities of each squad member.

In addition to the solo campaign, players can also join up for Raid Mode, where humongous bosses can be felled for upgraded loot, with three squads being available to a single player, or three players each commanding a single squad. In another twist, there will also be Treasure Island Mode, where one player attempts to survive ten consecutive waves of squads that are drawn from other players. Lastly, the game is also set to included PvP. 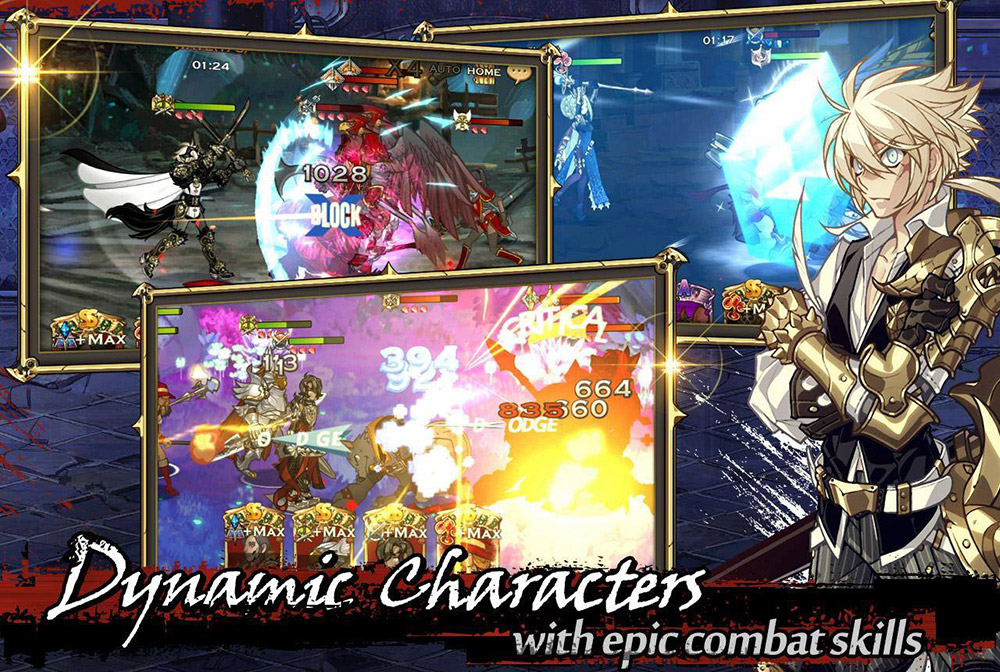 – A dynamic RPG with a captivating story and spectacular graphics
– A gorgeous side-scrolling RPG with breathtaking animated visuals
– Collect more than 150 characters, each with a unique battle skill
– Form strategic parties and take on any monster that comes your way
– Collect and upgrade an array of extraordinary weapons and items
– Meet new friends, make alliances, and battle bosses together
– Test your strength and compete against other combatants in arena-based PvP

Leading up to the release, Eyedentity Mobile also mentioned the following rewards for those who sign up to be notified of when the game is live:  “As a prelude to its arrival, a pre-signup event for Exos Saga is currently underway for players to get notified of its release”.

Players who participate in this event are set to receive several in-game rewards once the game launches: An S-Grade hero called Scarlett, along with 10,000 Gold, 3000 Xes, and a Medium EXP Scroll. Users who pre-signup via Google Play will get an additional 10,000 Gold on top of the aforementioned rewards.