The story for the game is somewhat shallow, and borders on being boilerplate for the JRPG genre. I assumed the role of Leon, a monster hunter who is promised gold to free Princess Alice from being forced to marry the evil king Xola (which was followed by a tutorial). Alice quickly becomes the second member of my three person party, and along with the early addition of Vonn (another monster hunter), the three of them complete the party for the game, with Leon being capable of both melee and ranged attack, and Vonn having only melee and Alice only ranged. As the game progressed, my party took it upon itself to deal with Xola once and for all, to free Alice from having to marry him. That’s about it for the story. It didn’t harm or detract from the game, mind you, it’s just not its strong suit either. Fortunately for the game, just about everything else in it was solid, so this isn’t difficult to overlook. 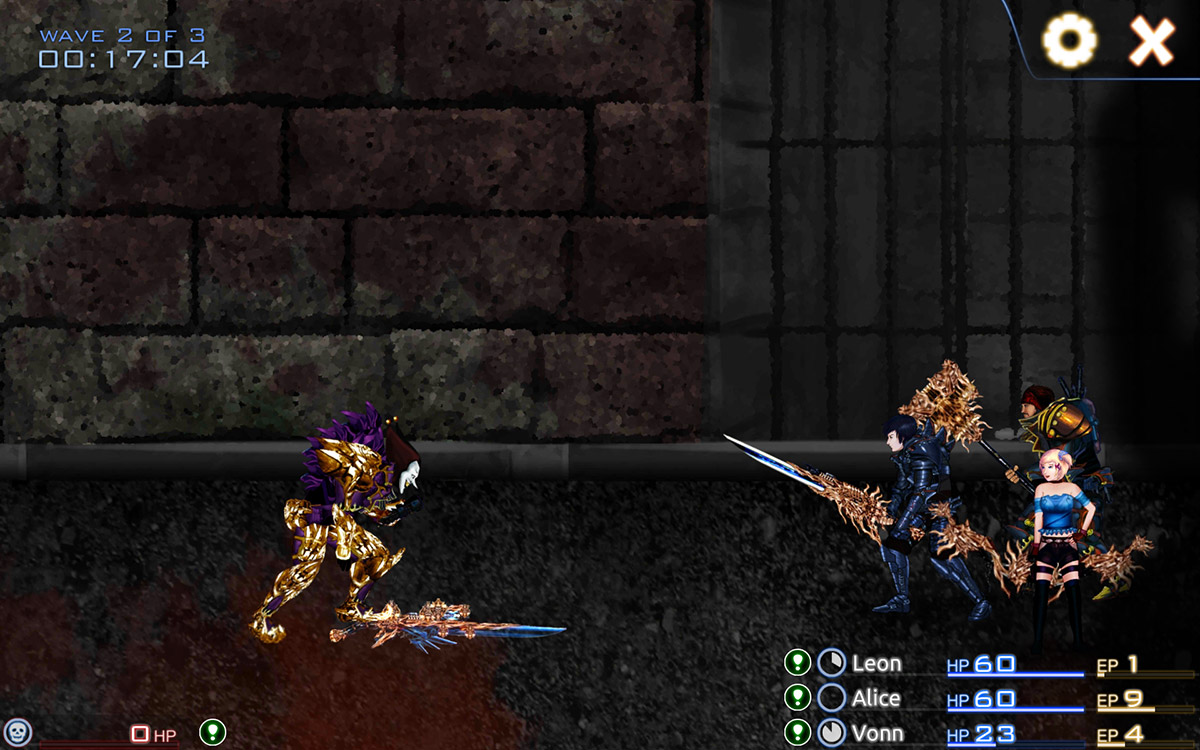 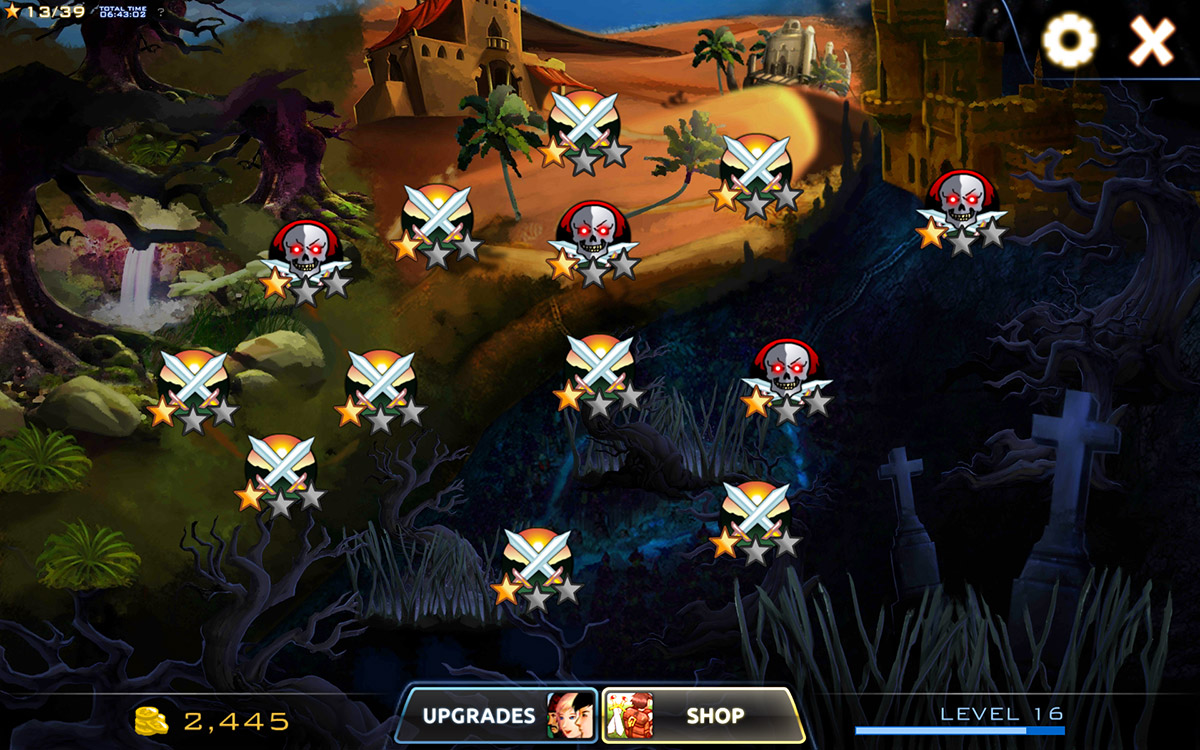 The story is advanced through intra-party dialog, and it is shown in two different forms. One is a text overlay, somewhat similar to Final Fantasy, though each line is kept in place while the reply slides in below it, until the screen is full (with the dialog scrolling upward to clear space, if need be); solid voice-work accompanies the text. The second way it’s advanced is in an animated form, where everything is drawn in red, with a yellow background. This was how full on cut scenes were displayed, with the same voice-work. I’m not sure why the game would bounce back and forth between these two styles, but it did nonetheless.

The gameplay is where JRPG style gets compared and contrasted. There’s an overworld map, but you don’t move about it like a player would in most other JRPGS. In Fearless Fantasy, the overworld is a static image, that seems to be divided into three sections that represent different regions of the kingdom. The story begins in the Leuna Forest, followed by the Gyoza Desert, Harrow Forest, and finally at Xola’s Castle. Each of the three sections provides four locations to clear, and adding in the castle left me with thirteen locations.

Once I completed the first location, I was awarded experience and gold, then the second location would appear on the map for me to select. There was no exploration or navigation of this map, simply tapping on the next icon was all there was to it. Each location had a small write-up that provided some “local flavor” for that particular spot, and at times seemed to fit into the story arc, and at other times it was more anomalous. I can’t say that it was very interesting, and frequently ignored it. When selecting the next location, I was presented every time with how difficult I wanted it to be. Nice touch. I could select Casual, Normal, or Veteran and it allowed me to control the difficulty of the game, without having to start over or enter a menu, and it seemed to primarily impact my ability to succeed in combat. 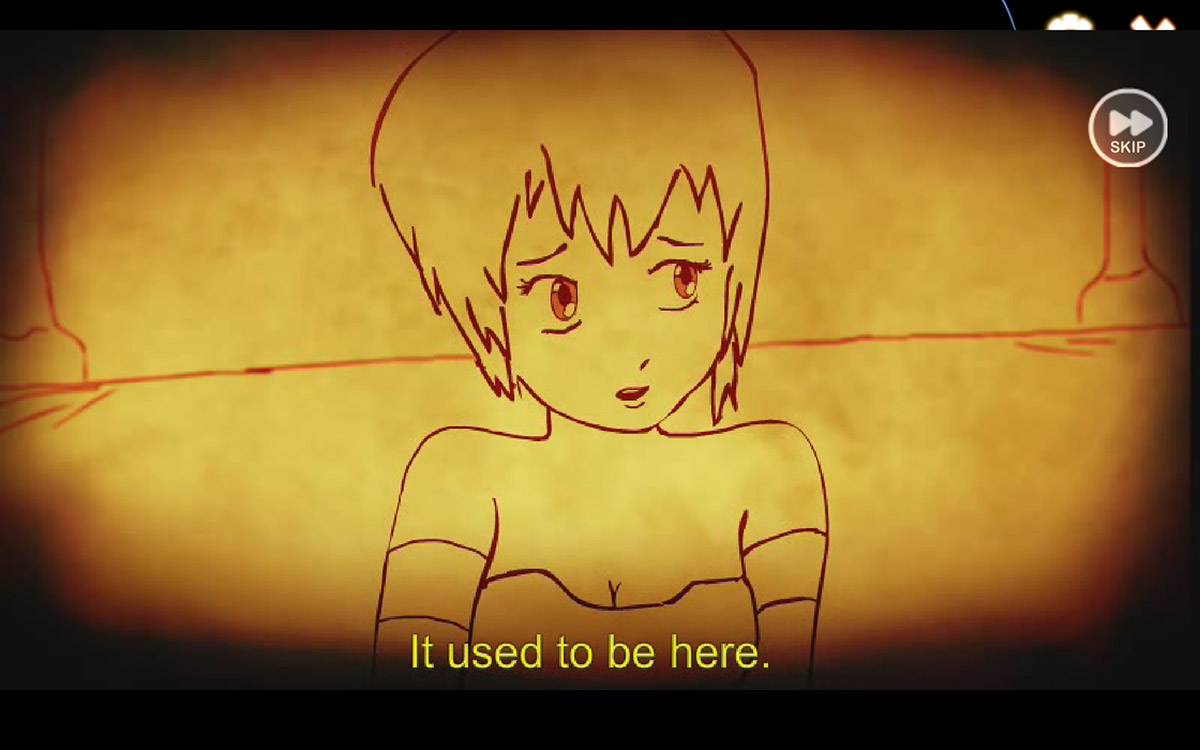 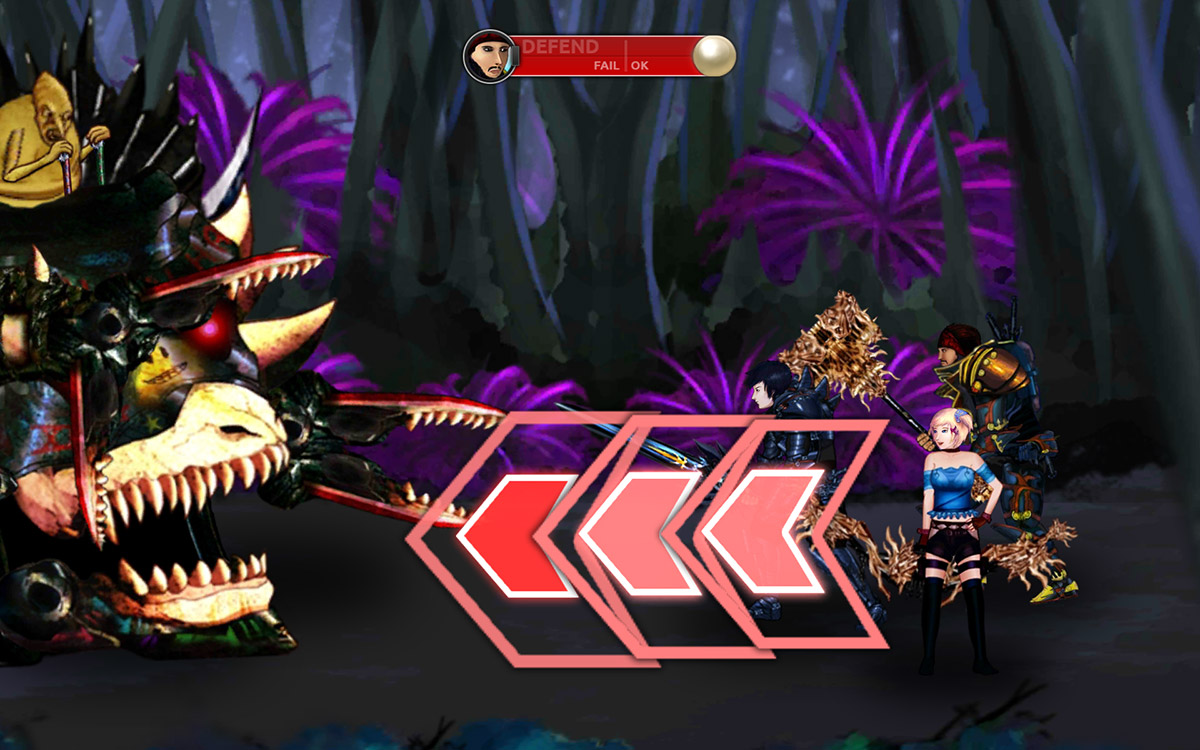 As I mentioned before, combat in the game will appear similar to  other JRPGs. The enemies line up on left side, my part on the right. Similar to Final Fantasy’s Active Time Battle system, each character in battle has a timer that moves at its own speed, thus determining the turn order. What happens when a turn is taken though, is a drastic difference from most other games of this ilk. When it was my turn to attack with one of my characters, I could choose what to do: attack in some form,  use a special ability, use an item, distract the opponents to draw fire away from other party members, or rest to recharge energy (its corollary would be MP to power special attacks); attacks were either melee or ranged. Once I selected my attack or ability, a pattern would begin to appear on the screen for me to trace out.

Circles need tapping, and tended to show up for ranged attacks, while strings of arrows that all pointed the same way needed to be traced with my finger and typically showed up for melee attacks. The better I timed my taps and traces, the better the attack or ability was executed by my characters. Each attack had its own pattern, per player and per weapon, so even when I selected a run-of-the-mill melee attack with Leon, the pattern would be different if I’d just changed his weapon out. The patterns would also vary as to where they’d appear on the screen, so I never REALLY knew where to expect it from. When I monkeyed around with the difficulty and ramped it up to veteran, i noticed that the targets appeared and drifted around the screen at a much faster pace, and were appreciably smaller in size as well, forcing me to be both faster as well as more accurate in my swipes and taps. When enemies attacked, the same patterns appeared on the screen, though their intention was working in reverse: I needed to be swift and accurate in order to mitigate, if not outright dodge, the attacks that were coming my way. And as the game progressed, even at a consistent difficulty level, the patterns would become increasingly tricky. And while I’ve played JRPGs with timing or button patterns that did this (Sabin in FFVI, Legend of the Dragoon, et al), I don’t recall one where the entirety of attacking and defending hinged on it, every time. This is definitely something the devs can hang their hat on. 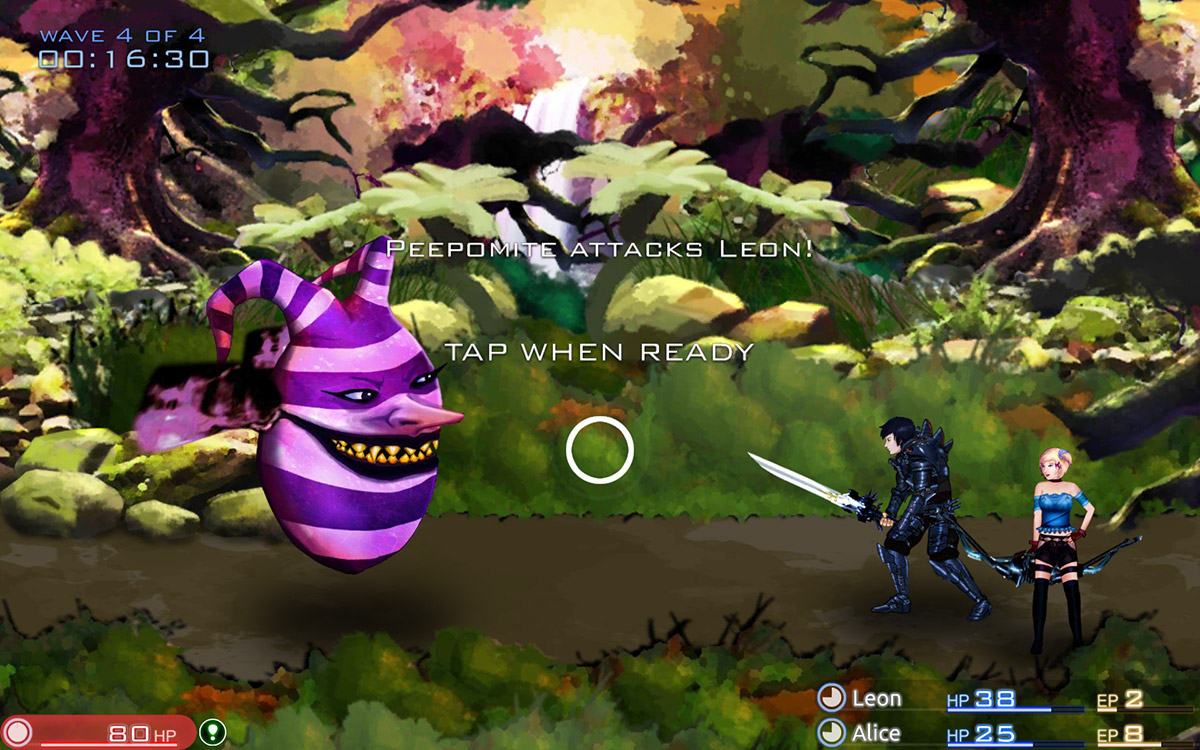 All combat is formatted in waves. For every spot that I played through, I faced a number of waves of enemies. There might be one, or as many as three enemies in a particular wave, and combat would continue until I’d exhausted all the waves. There might be as few as one or two waves (like in the early going), and it could go up to five or more. And once all the waves were completed, the level is over and I’m awarded both experience and gold, as well as a star for each level of difficulty. If I wanted more than one star, then I needed to select the second or third a higher level of difficulty that would then award me the commensurate number.

In between the levels is where upgrades, gear, and inventory management happen. This is also another place that the game is distinct. Being a bit of a stripped down RPG means things won’t be as fleshed out as they would be in a more full fledged game in the genre. Like the overworld map not having any places to navigate, skill acquisition, upgrades, inventory management are all there, but very bare bones. After every round, I could go to the store and purchase supplies to replenish health and/or energy, remove negative statuses (blind fatigue, et al), revive fallen party members, and so on. I could purchase upgraded weapons and gadgets, such like someone would expect. Where it gets “stripped down” is that there’s only one store, so the inventory doesn’t change much, as one would find in larger games. New weapons and items get added to whatever is already being offered. There is one item screen for my entire party, able to hold up to a dozen items. I can equip a single weapon and a single gadget to each of my party members. No armor or multiple weapons or gadgets. Also, when you buy a new weapon or gadget, the old one is sold back to the store, so I wasn’t able to keep more than one kind, for special situations. 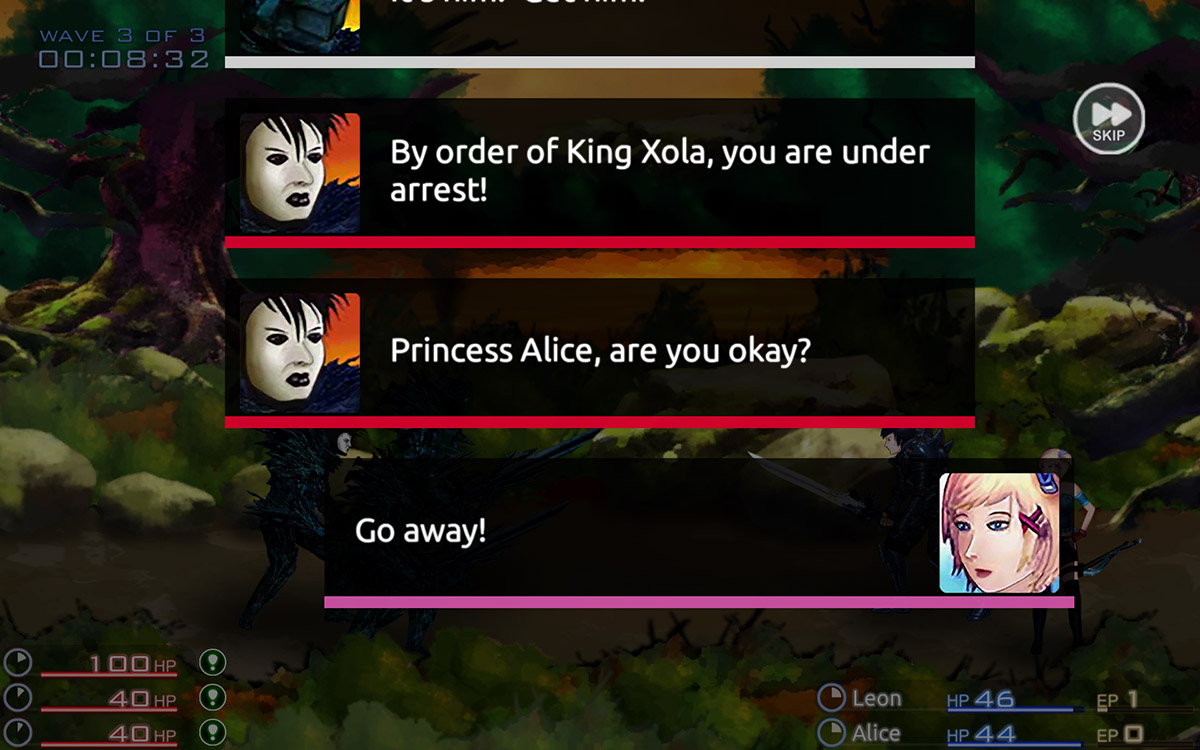 Leveling up worked the same way. Each character had four stats that I could raise up. Strength (total attack), vitality (total HP), endurance (the corollary for MP), and agility (how quickly that character is ready to take another turn). I could add one point to any one of those categories, though I could hit a reset button to tale back ALL the points I’d assigned to that category and relocate them, if I so chose. Nice touch. The characters had the same number of special attacks (five) and one of the five functioned the same for each character, leaving four special abilities that were unique. Here, the developers did a good job with variety. Leon, for example, had specials that were risky, but could do massive damage. Vonn tended toward taking damage for other party members or clearing all negative statuses for everyone, friend and foe alike. Alice focused more on healing or protecting the party. While this breakdown isn’t wholly original, it did work out well within the game.

The art style is reminiscent of something Tim Burton out. Everything in the game has a particular style of art to it. And it’s not just creepy looking enemies, but even the heroes wear at least some of the color black, if not completely garbed in it. There just seems to be a a touch of darkness to the visual styles, and I frankly found it appealing. Many times we see heroes that are brightly colored, so to see them in dark and foreboding color schemes was a nice change of pace. On the other hand, the music was fairly upbeat, and electronic. Oddly enough, it worked. 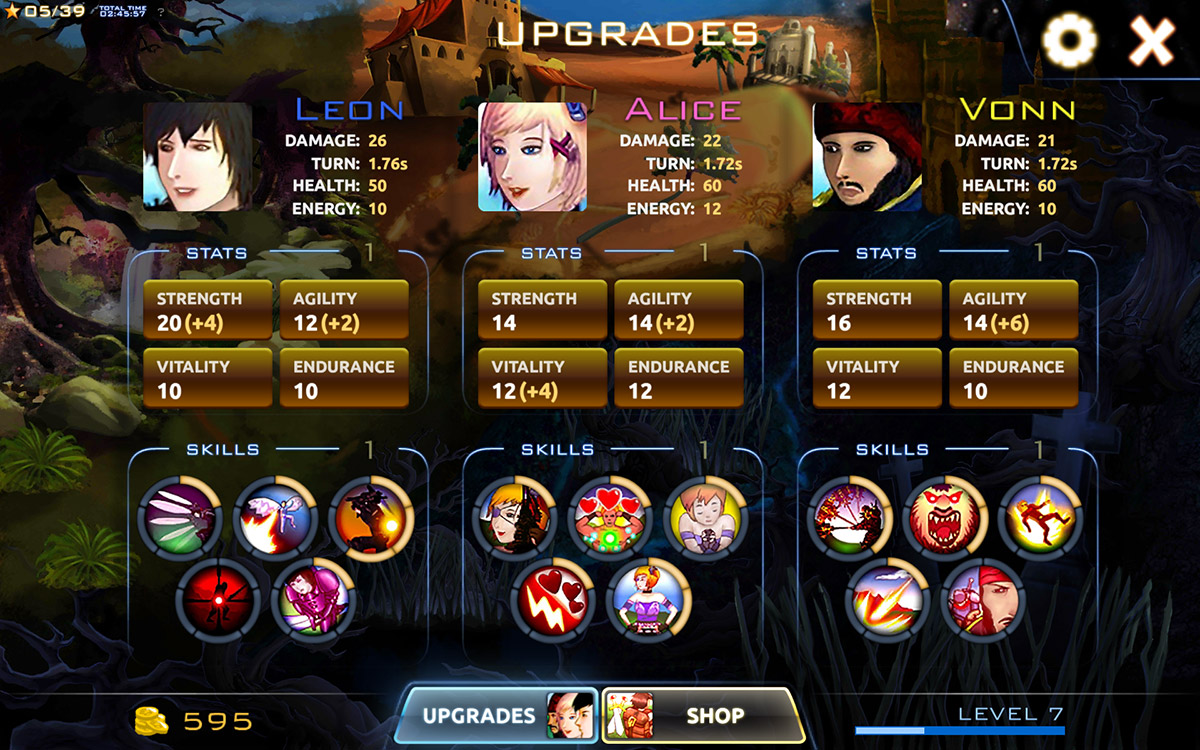 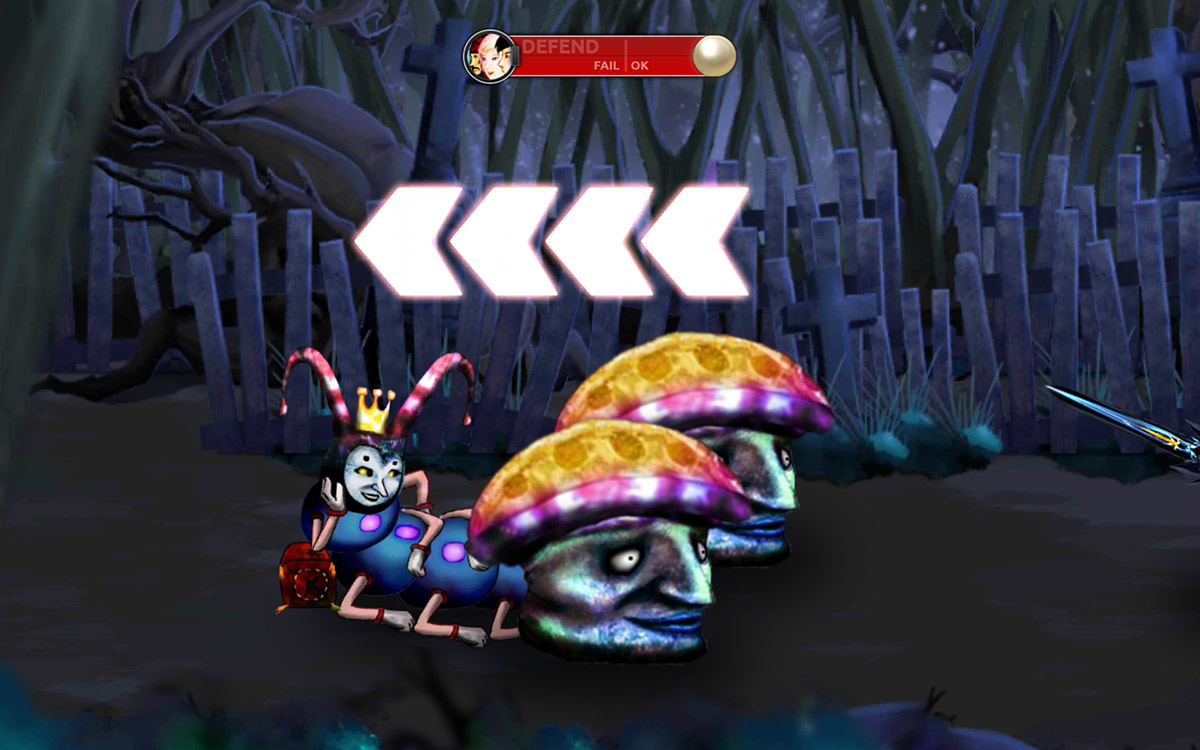 There are three save files available to the user, as well as an option in the settings to dial the frame-rate back to save battery. And speaking of battery, I noticed that when I hit home button directly from the game, that it still ran my battery down as if I were still playing it. I noticed this by mistake, ad I tend to squeeze gaming in when I can. When I have to kill off the game in hurry, but intend to resume later, I’ll hit the home button and turn off the screen. Normally the game goes into it’s save state. For whatever reason, this one didn’t. When in went back to play, more than half the battery had been used while the screen was off and it wasn’t touched. It’s the first time I’ve seen a game do that, , so it might’ve been a momentary glitch, might not. Either way, fair warning.

On the whole, this game was a lot of fun. It’s not what I was expecting out if it, to be sure. That being said, once I took it for what it was, I really began to enjoy it. I think any RPG fan would appreciate it, despite it being trimmed down.