As a pro boarder, there is only one option for you to even consider with the world ending around you… go out in a blaze of glory. There is a chance you could actually survive, but that requires not getting fried alive by the molten lava that is chasing you. Controls are fairly straightforward, with players tap + hold on the screen as you are coming down onto a hill, or currently going downhill if you are not in the air, and then releasing when you are going uphill or gliding up into the air. When in the air you can do tricks as well to build up your RAD meter and keep the lava further behind you. 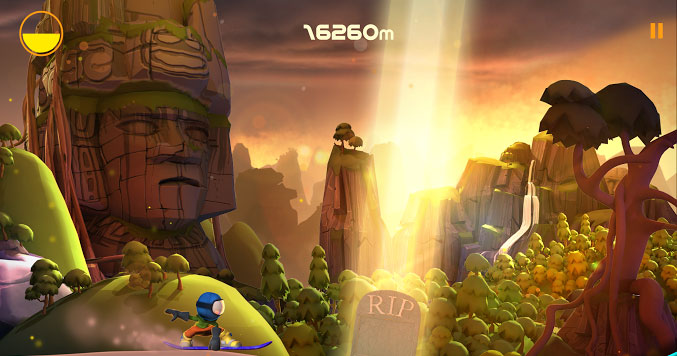 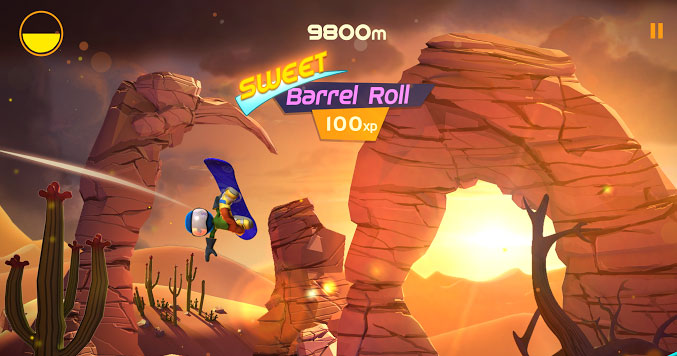 • Sweet Environments – Work your way up through ever increasing challenges, adventuring through the grasslands, desert and jungle until you reach the ultimate challenge of the Ice Lands.
• RAD Mode – You’ll need to perform FLY combos to activate RAD Mode and crank the awesome levels up to 11! Maintain RAD Mode to slow down the lava.
• Sick Tricks – Ride out the end of the world in style with some smooth tricks. Unlock new abilities as you level-up and chain them together for a sweet variety bonus.
• Epic Boss Battles – Face off against Tiny the Bear in adrenaline-fueled boss battles.
• Deadly Tombstones – Beat your friends and show off your high score by smashing through their tombstones. Unlock new deadly tombstones and let the world know that you’re totally RAD.
• Pop the Frogs –  Discover rare frogs on the slopes and pop them for cool rewards! Earn costume pieces to unlock new threads and sets of Milk Caps for bonus rewards!

Interestingly enough, RAD Boarding also has a boss fight where you need to impress a bear with your tricks. Every time you meet this bear, it will get harder to impress him. Impressing him is a good thing, failing to do so is not. During each run you will see the occasional tombstone. These mark where your friends have died.

RAD Boarding is now available off of Google Play for free with optional IAPs as well. You can also check out the game in action with the video below.