Hearthstone to get a co-op Tavern Brawl mode in a future update? It looks like it.

Hearthpwn does a lot of things to get the skinny on upcoming features and other goodies that are supposed to be arriving in Hearthstone. The latest is very interesting indeed as it appears that a co-op Tavern Brawl mode is making its way to Hearthstone in the near future. The mechanics and strategies may be totally different when talking about co-op Hearthstone gameplay.

The possibilities are pretty huge, but it will more than likely just be limited to co-op Tavern Brawl and we won’t see this bleed into the other game modes in Hearthstone. Thanks to Hearthpwn sleuthing and datamining, the folks over there have found the background image for the upcoming co-op Tavern Brawl mode, as well as details about the boss players will be facing. 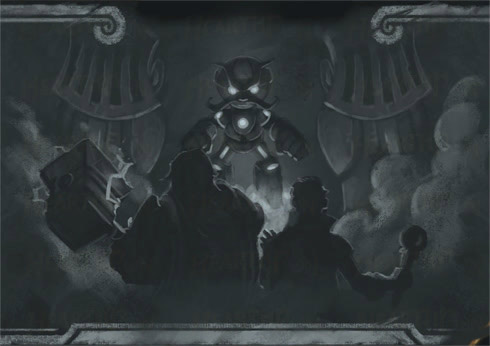 The boss will be Gearmaster Mechazod and with his staggeringly awesome mustache, this bot plans to kill everyone who tries to take him out. His stats include 95 health, 2 Attack, and a Mana Cost of 10. Further confirmation about co-op happening, aside from the two characters in the background getting ready to face-off against Gearmaster Mechazod, is the text on his card which reads: “Mechazod wins if he defeats either of you!”. This also lets us know that beating him is going to be touch, since both players clearly have to be alive throughout the entire fight to defeat him. 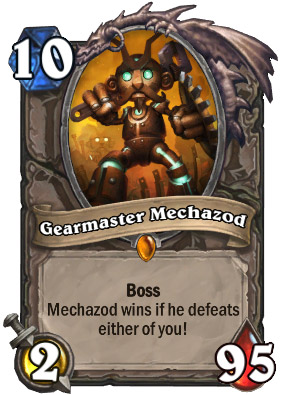 Other bits of information found in Hearthpwn’s datamining include the possibility of earning a Brawl pack just by playing in the Tavern Brawl, instead of having to win a game. On top of that, there is a list of new Brawl cards coming soon, although whether those show up when this new co-op mode arrives or before then isn’t known. Either way, co-op Tavern Brawl sounds like it could be a lot of fun.